The Pinto now gets yuks as the car that always exploded, but those jokes didn’t really start until Mother Jones magazine printed the “Pinto Madness” article in the fall of 1977. By that time, the Pinto was only a couple of years from being discontinued; in its 1971-1974 heyday, the little rear-wheel-drive Ford econo-commuter sold like crazy. Today’s Junkyard Treasure is a Pinto Runabout from the car’s most successful sales year, found in the same Denver-area car graveyard that gave us the ’55 Studebaker Commander and the ’87 Citroën CX GTI in recent years.

The cars of the 1974 model year hit the streets just about at the very moment when OPEC shut off the oil spigot and American drivers suddenly found themselves slugging it out in gas lines. That made cheap, fuel-stingy cars such as the Pinto extremely popular; 544,209 Pintos were sold during the 1974 model year. New for ’74 was the 2.3-liter version of the Ford Europe-designed Lima engine, rated at 86 horsepower. The Lima continued to be installed in US-market Ford machinery all the way through 2001, when the Ranger got a 2.5-liter version. 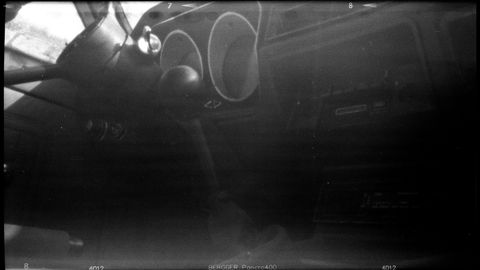 I brought a 1910 Kodak camera modified with a pinhole lens for this junkyard trip; we’ll see more shots from this roll later on.

I used the same camera to get a couple of color shots of the junked ’76 Checker Marathon.

The guy pulling the bumper is the team captain of Tommy Salami and the Meat Wagon Racing, the most successful Pinto team in 24 Hours of Lemons history. I let him know about this Pinto and he met me at the yard.

The Tommy Salami Pinto’s front bumper had been torn up in an on-track incident, so finding a cheap replacement was a bit of good fortune for the team.

In a Ford Model T, you could depend on just about everything… except the weather. In a Ford Pinto, you can make your own weather.