Despite recently making headlines for going against the grain and declaring it has no plans to cease the development of internal combustion engines any time soon, BMW recognizes the demand for more electrified, less gas-dependent vehicles isn’t going away, either. The company already has quite the extensive EV resume—having built the i3, defunct i8, and imminent iX—but to bridge the gap between traditional, gas-only Bimmers and something like the upcoming, all-electric i4, we have cars like the 2021 BMW 330e. It is, as its nomenclature suggests, a plug-in hybrid 3 Series.

It looks like a 3 Series, drives like a 3 Series—which is to say, objectively, quite well and with added electricity. It’s reasonably quick, nimbler than average, and can sit happily at highway speeds. The 330e behaves like a non-M 3 Series despite the M Sport Package goodies adorning this Oxide Grey II Metallic tester. 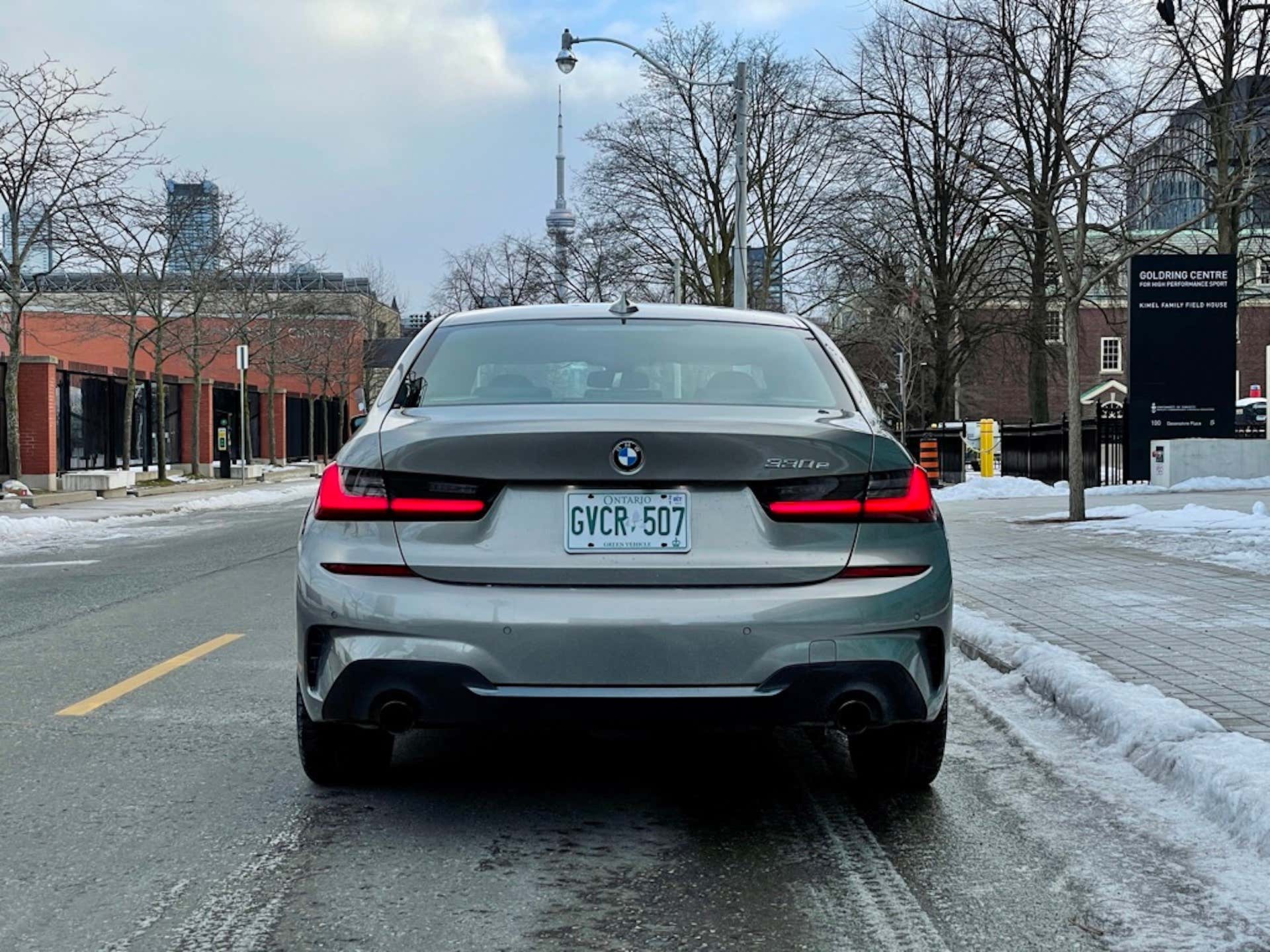 Is it luxurious? Sure. Is it quick? Yeah. Is it fuel efficient? Decently. But is it interesting? Not particularly. Nevertheless, let’s unpack exactly what the 330e does right and does wrong.

A Typical BMW, Inside and Out

On the topic of style, BMW has caught a lot of flack lately for saddling cars like the 4 Series, M3, and M4 with some heinously large kidney grilles. But, credit where it’s due, this non-M 3 Series remains one of the good ones. It’s handsome and restrained and pretty unmistakably a BMW with its Hofmeister kink and L-shaped taillights. 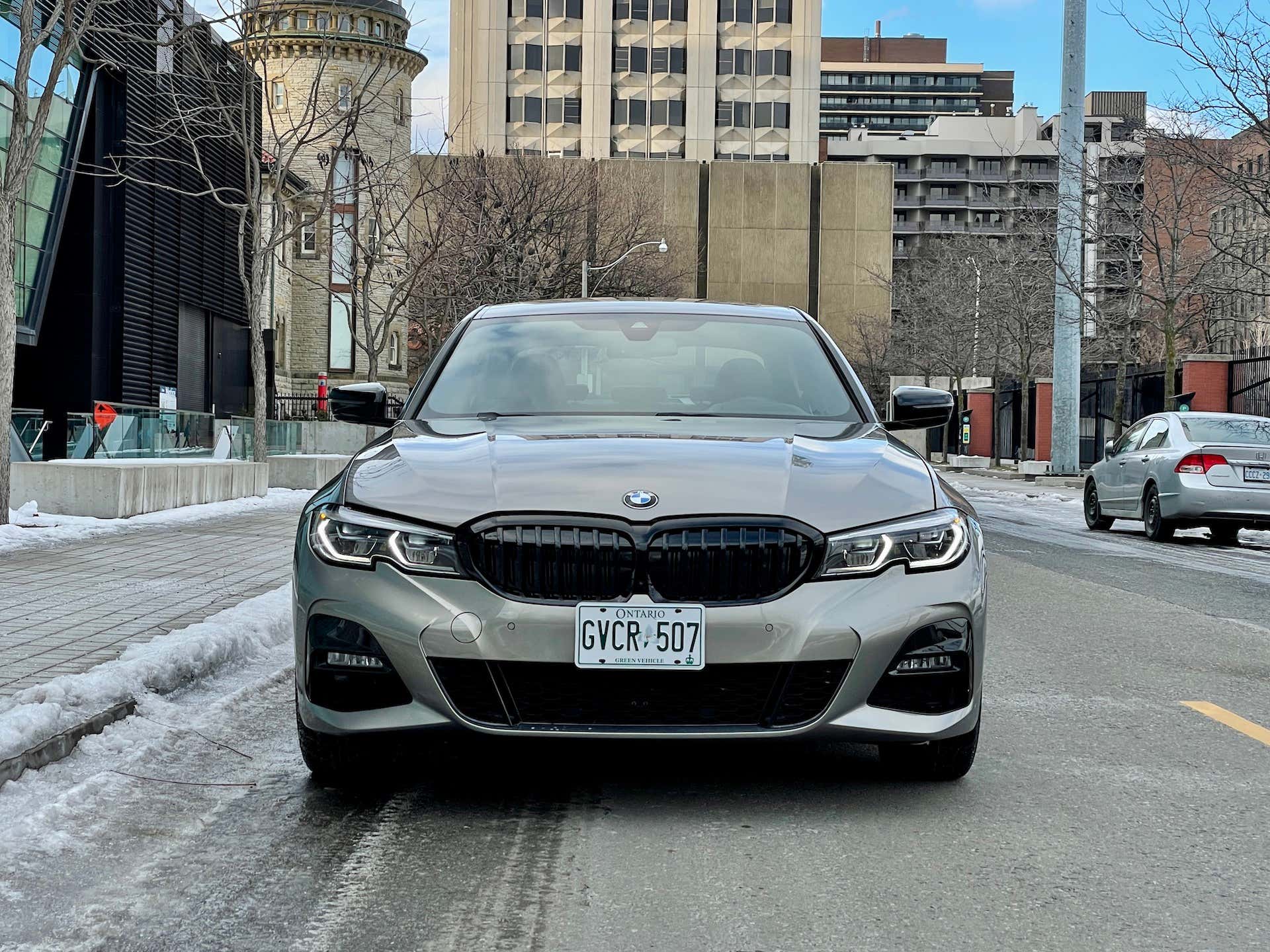 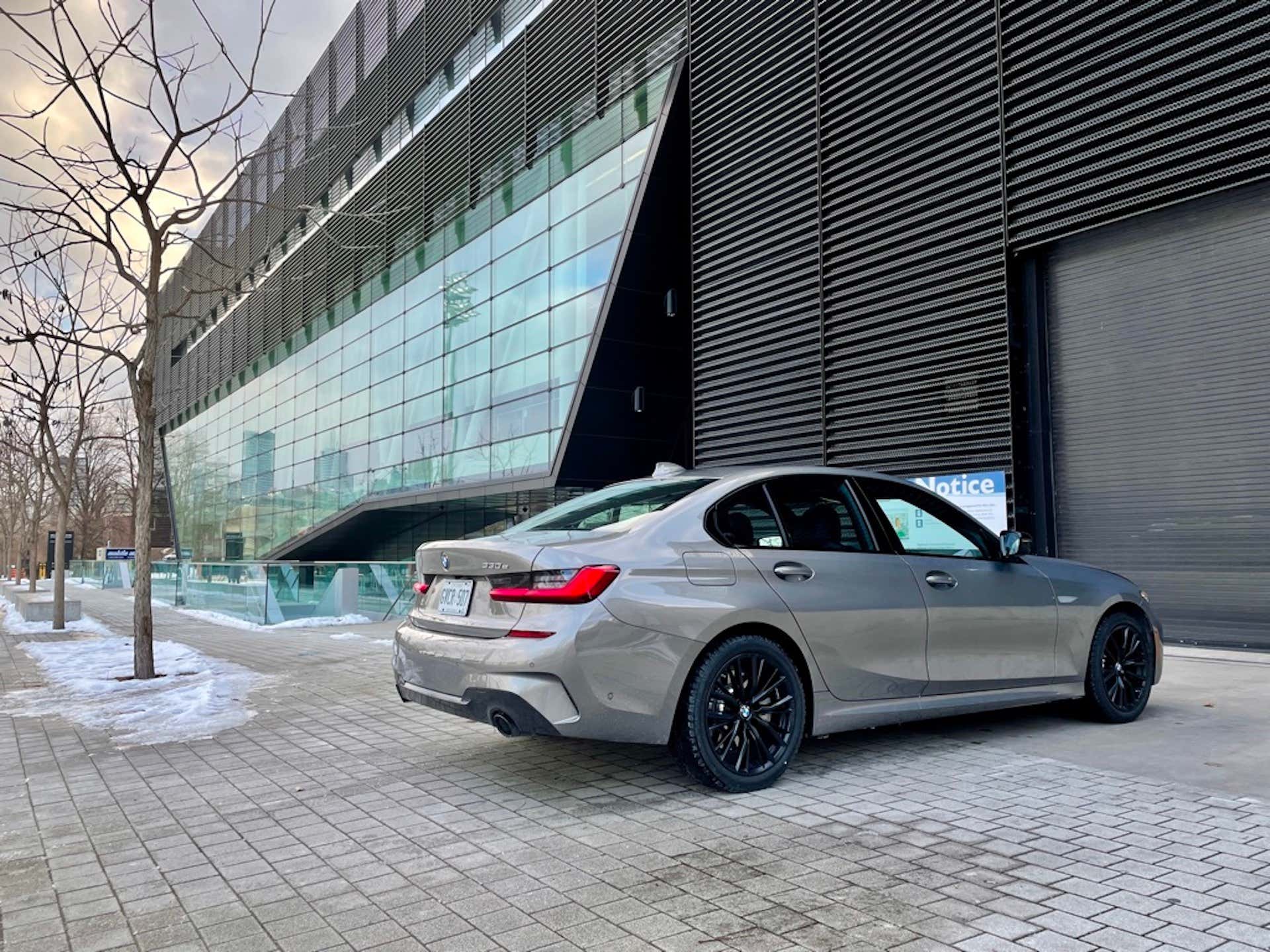 The sides of the G20-gen 3er are a little plain Jane and could maybe use some Bangle-influenced flame surfaces, although, given what BMW is capable of when told to spice up its exteriors, I’m gonna go ahead and rescind that last statement. The thing looks great, BMW. Give us more of this, please.

The sportier front and rear bumpers that come on the M Sport Package are a significant upgrade from the base car’s look and make the $2,000 CAD bundle a no-brainer. That package also includes 19-inch wheels (not present on my winter tire-equipped tester), shift paddles, LED fog lights, adaptive M suspension, and the leather-wrapped M steering wheel that’s found in pretty much every M-related car from M235i Gran Coupe to M8 Competition. 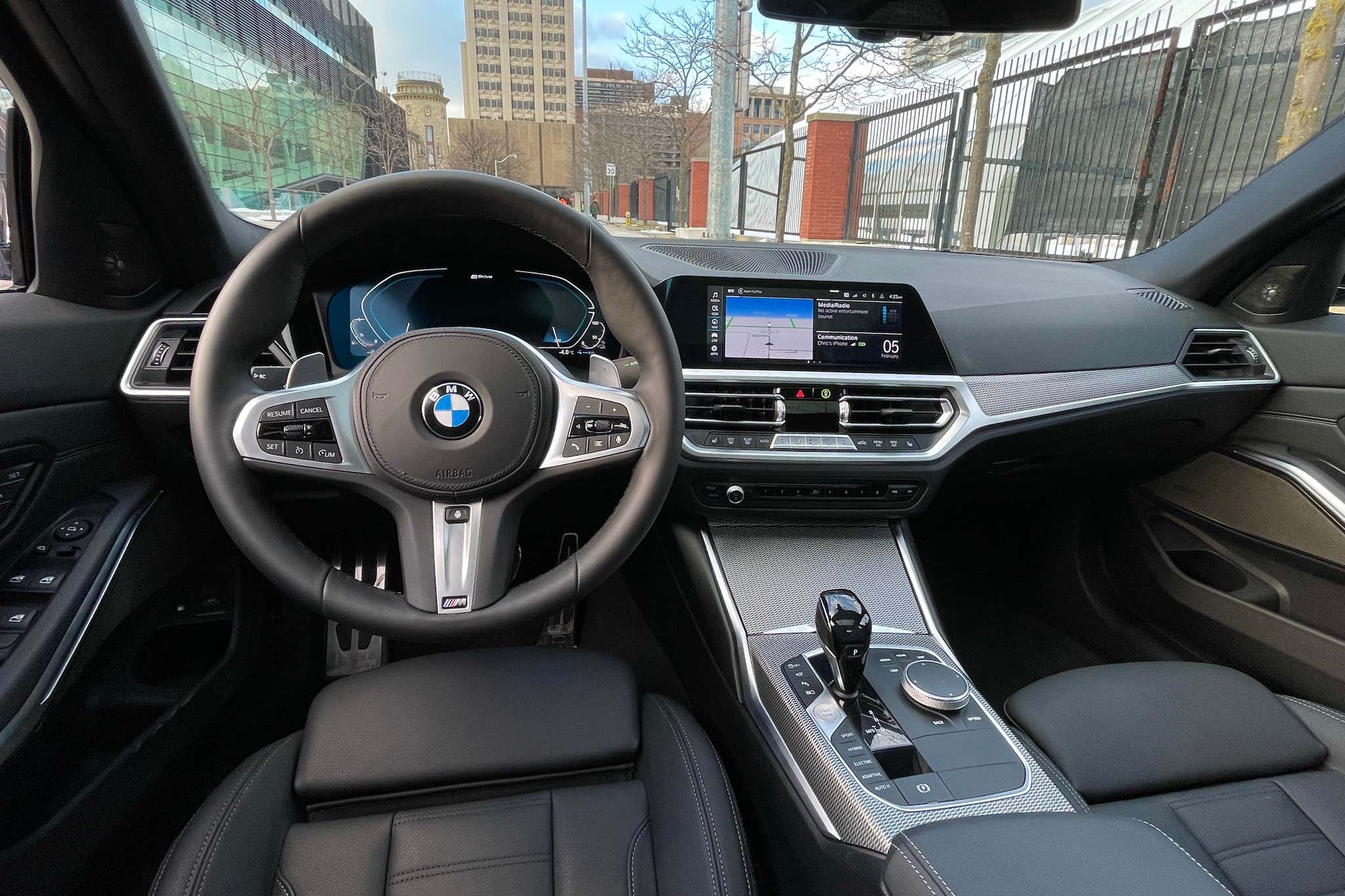 Speaking of, the 330e’s interior is similarly toned down. It’s essentially the same cabin found in pretty much every recently redesigned BMW from X7 to Z4—meaning that, the decor here is basically fine. It’s definitely swankier than something you’d find on a non-luxury vehicle, for sure, but compared to most of the other cabins that actually compete in the luxury space, such as ones found in Mercedes and Genesis models, it leans more on the subdued side. Build quality, however, is high. Everything feels put together quite solidly, with minimal creaks and flex.

iDrive remains one of the best in-car infotainment systems on the market and is projected through a 10.25-inch wide-set screen slickly integrated into the dash and, in BMW tradition, is canted towards the driver. The screen itself is sharp and high-quality, and the way the built-in navigation system feeds turn-by-turn directions to the HUD is quite well thought-out, giving you accurate, thorough directions. It shows you exactly the right amount of info and makes getting lost a difficult thing to do if you’re paying attention. There really aren’t many built-in nav systems out there that would pry me away from Google Maps, but I actually found myself opting to use this one over Google’s directions fairly often. 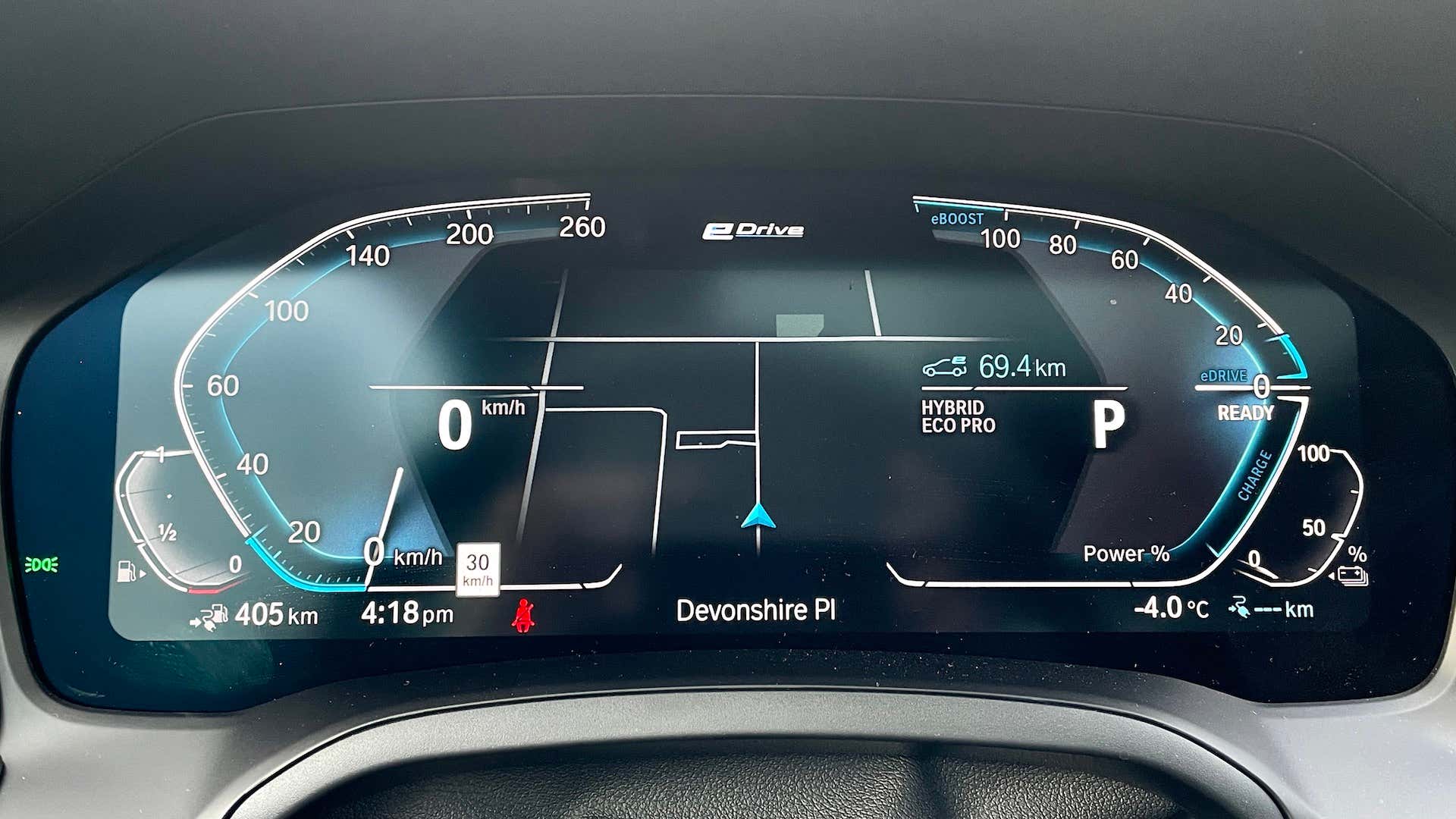 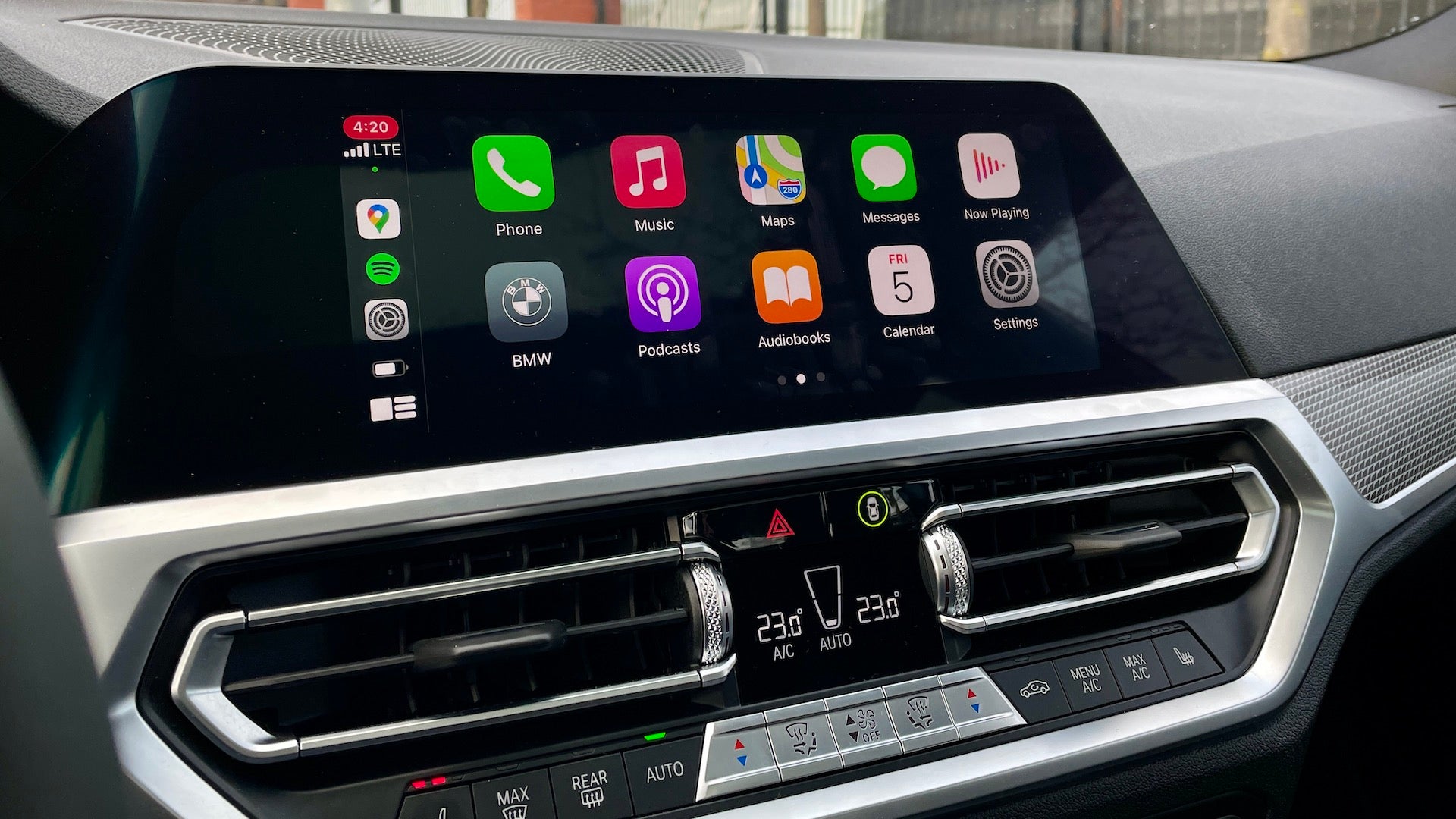 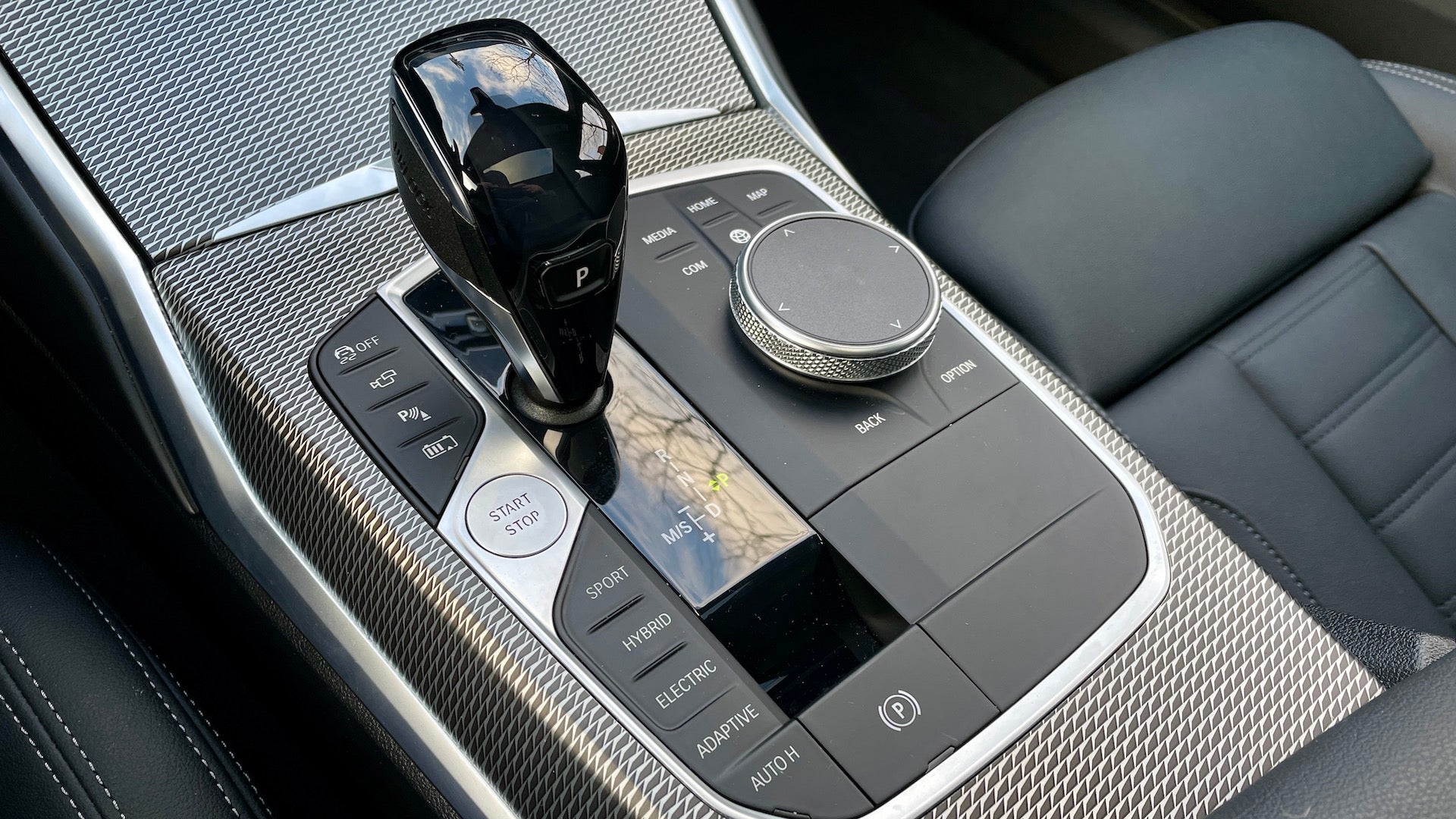 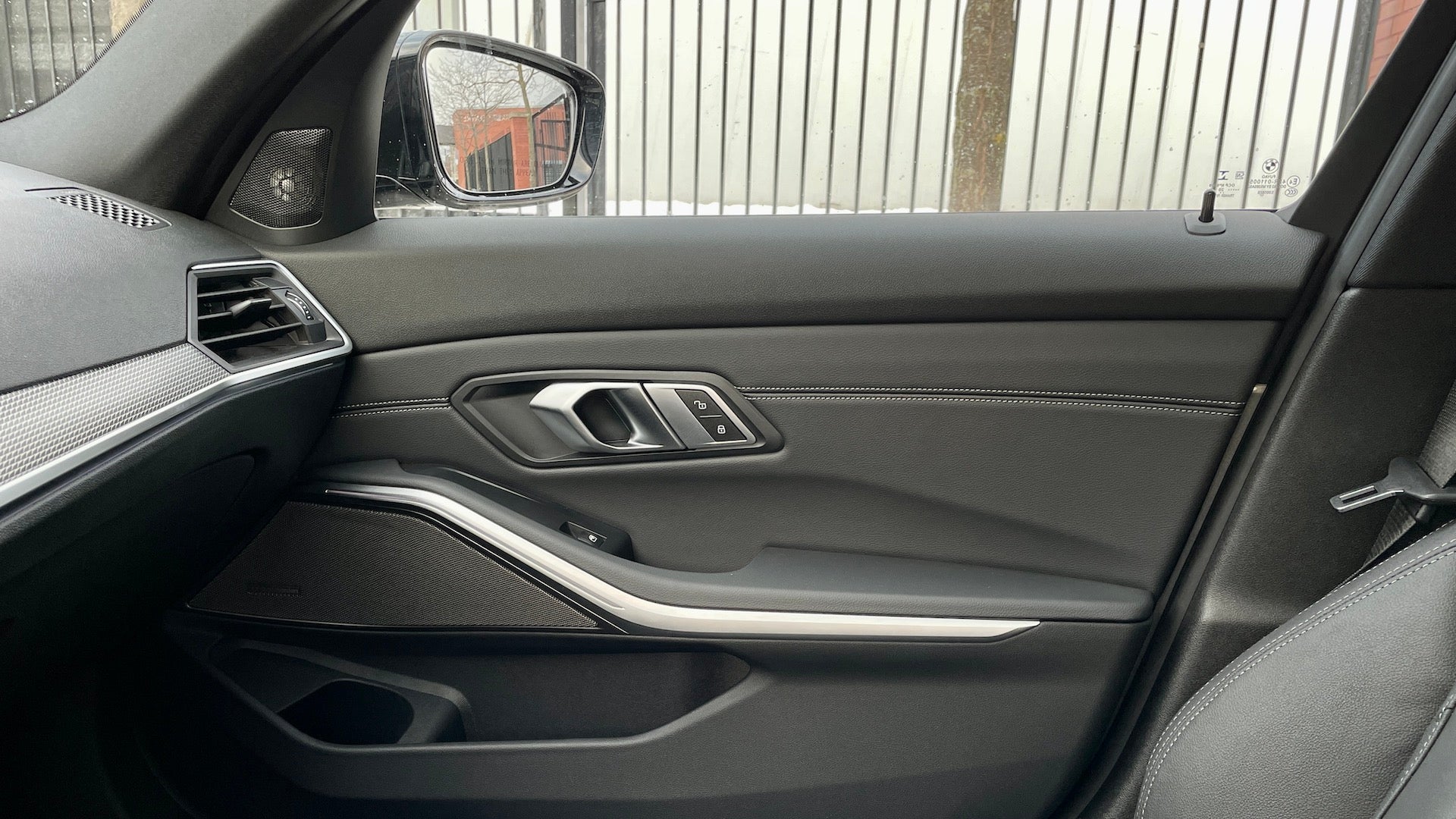 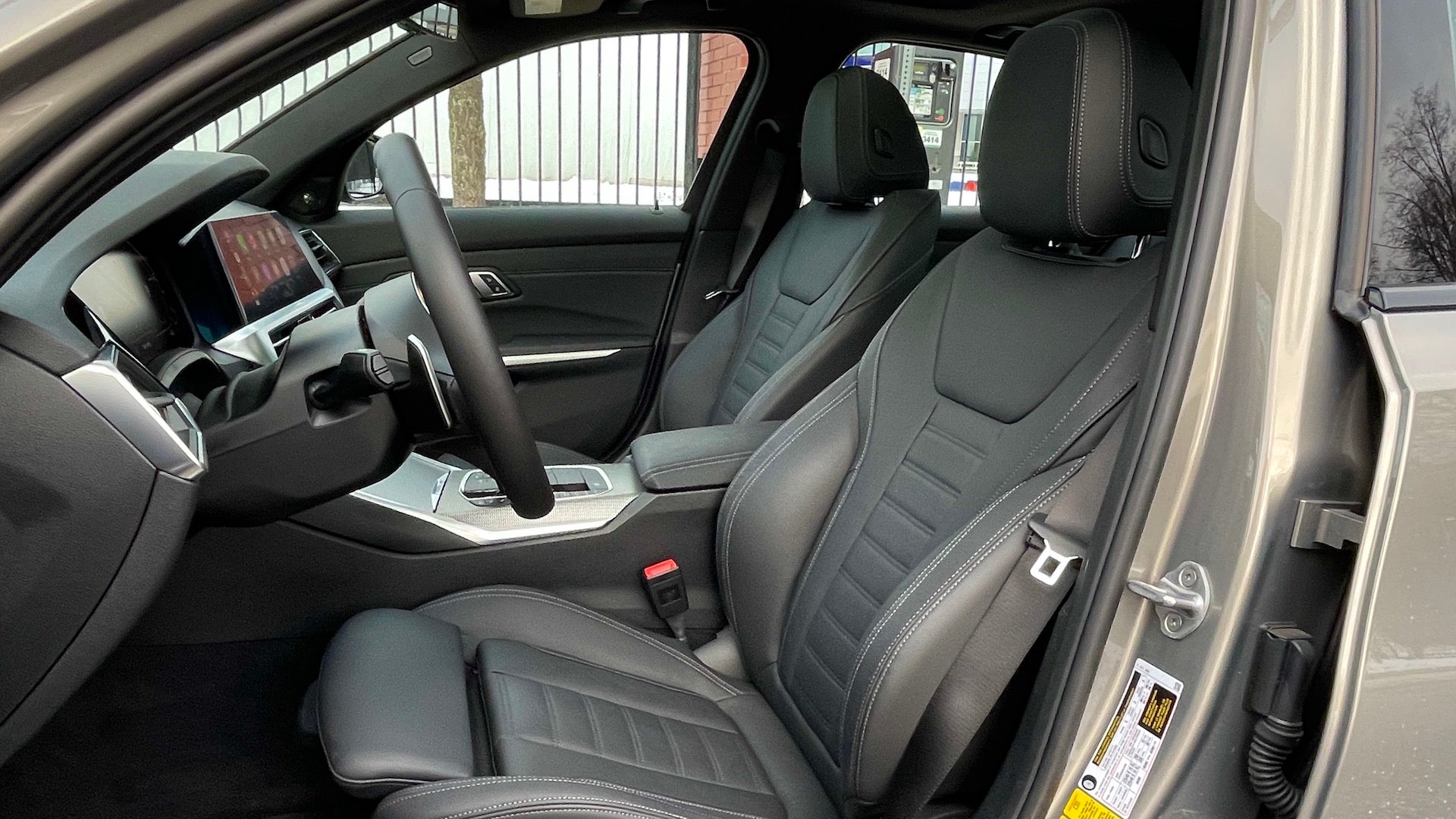 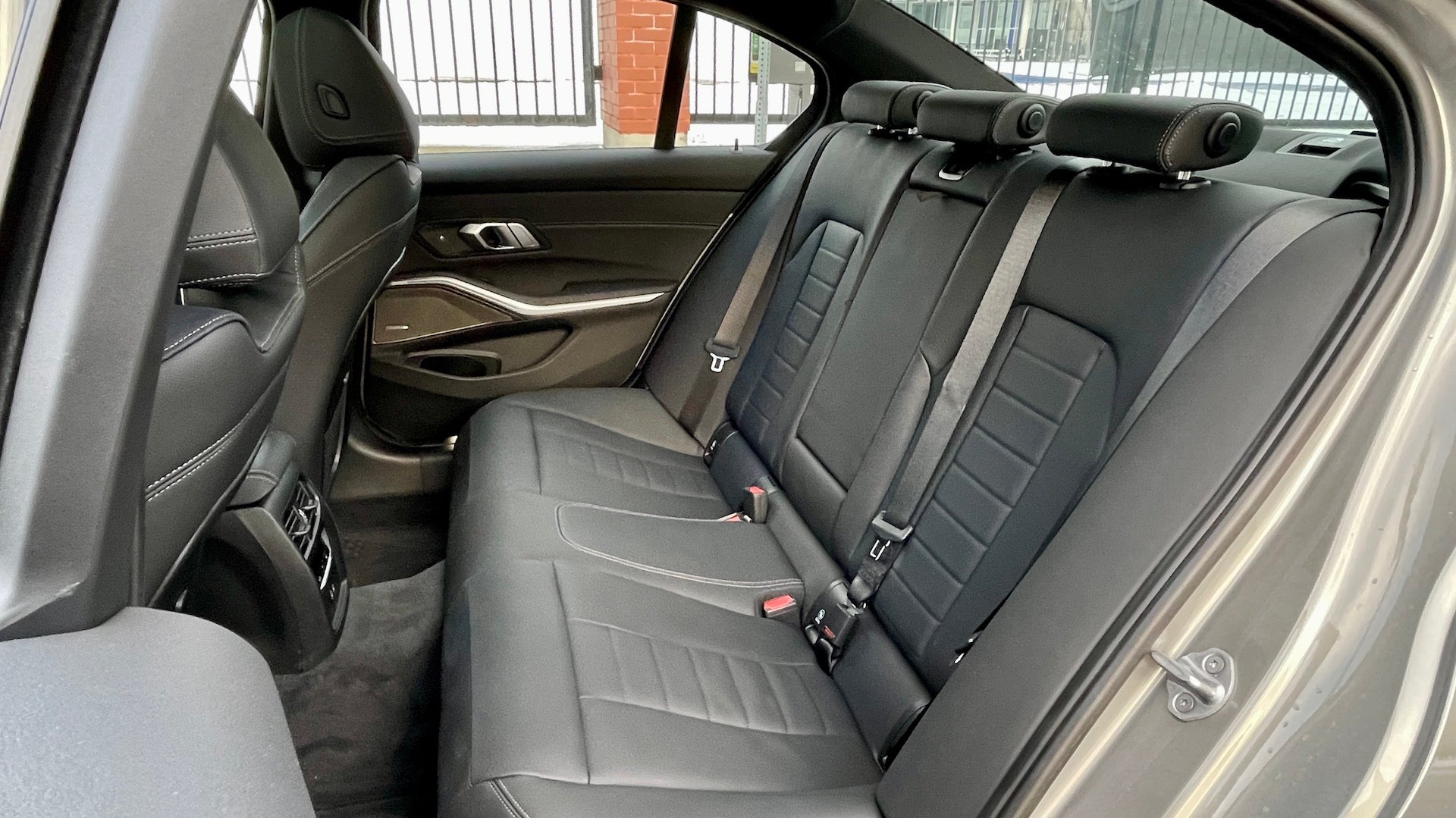 As for things that could be improved, the silver-and-black “Aluminum Tetragon” trim that came in my tester felt and looked extremely cheap and sure as hell didn’t feel like real aluminum. Thankfully, BMW offers multiple open-pore wood options for no extra cost, all of which would probably be a better choice than whatever this is.

The way BMW laid out its 12.3-inch digital instrument cluster is not particularly attractive nor practical. To be clear, this had nothing to do with that symmetrically backward tachometer. There was just something about the font used and how all of the text had been arranged that made it hard to parse quickly. It felt cluttered and I found it hard to pinpoint where BMW chose to place a certain piece of information without already knowing.

The drive mode selection button—which is literally one big button that presumably uses touch sensitivity to determine which driving mode you want—was impossible to use on the go without looking down. It has also been inconveniently placed way out of the area where the driver’s hand would usually hang out. The seats, meanwhile, weren’t particularly uncomfortable but they also weren’t especially sumptuous. The armrests were quite hard and the leather used is stiff and grainy rather than soft and creamy. 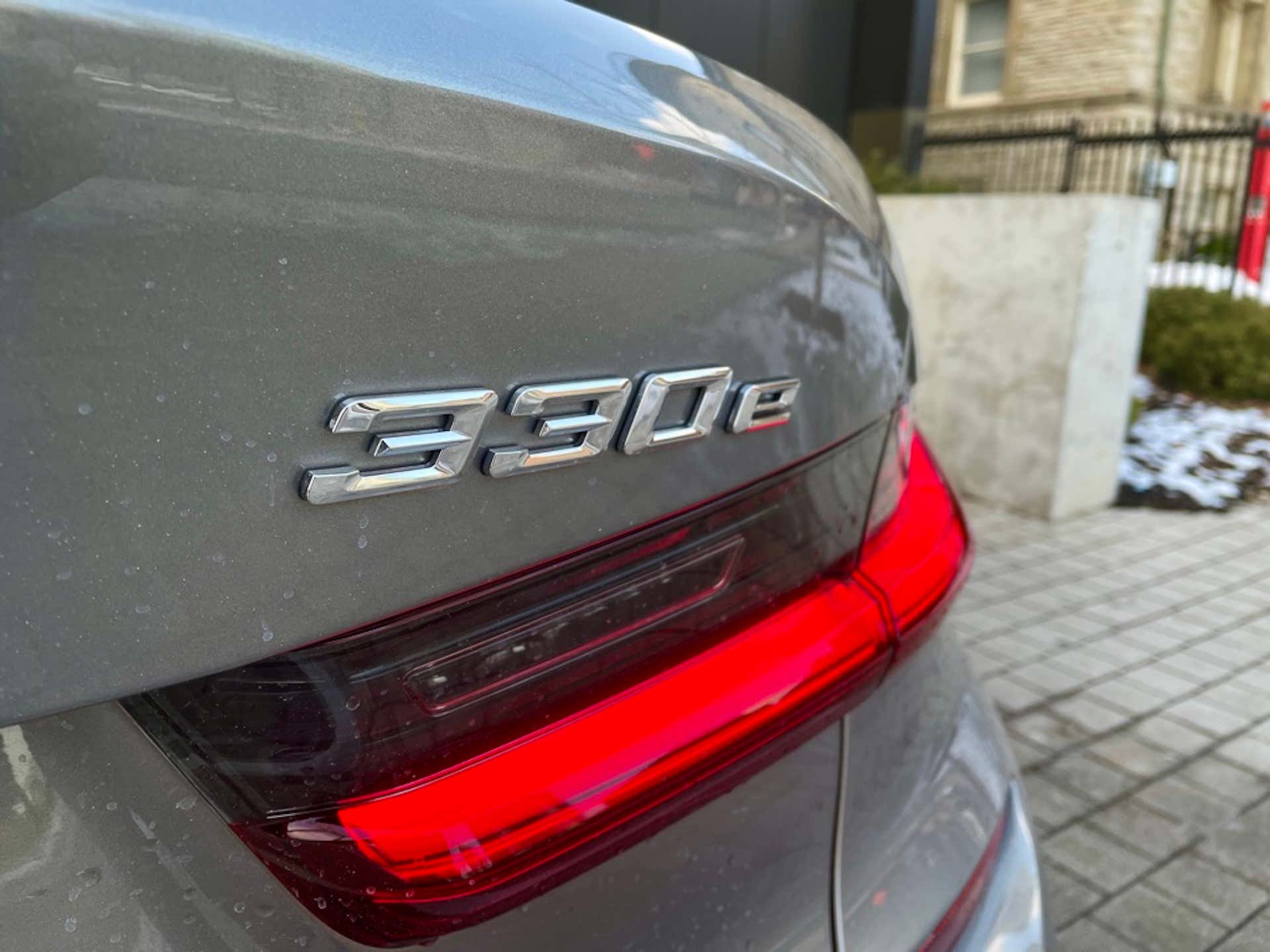 Backing up a 107-HP electric motor is a 2.0-liter turbocharged four-cylinder, making 181 horses of its own. Altogether, the plug-in hybrid system makes 288 HP and 310 lb-ft of torque when the XtraBoost driving mode is selected (total output reverts to 248 HP otherwise). These figures translate into decently urgent—if not face-melting—acceleration. Hybrids usually mean silent, smooth operation and the electrified 3er was indeed quite smooth once it gets going.

But at low speeds and coming to and setting off from a stop, it felt a little clunky compared to other hybrids. Other electrified cars smoothly glide away from stoplights before their gas engines discreetly come into play. In this one, the electric drive setting off from zero mph felt and sounded rougher than it should and the gas engine always seemed a little caught off-guard when required to join the party. The regenerative brakes themselves were effective, yet the pedal was spongey, imprecise, and made it weirdly difficult to bring the car to a stop without inducing a little jolt just before it became stationary. 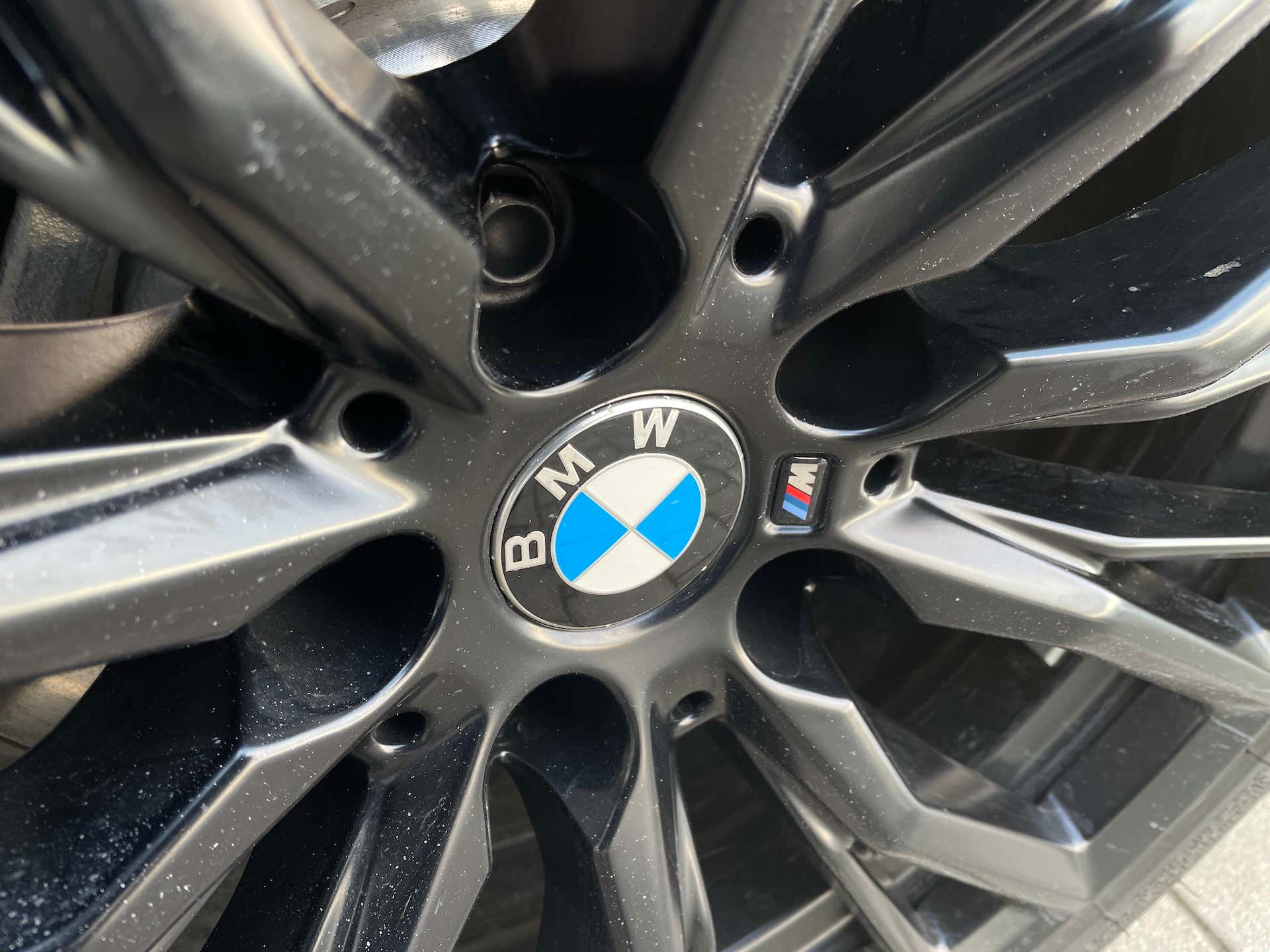 BMW’s B48 four-cylinder, meanwhile, sounded less vacuum cleaner-y than most garden-variety four-pots and more like a BMW straight-six with two cylinders chopped off—probably because, on a basic level, that’s what it actually is. Its noise was relatively deep and gravelly and does quite a bit of work in reminding you this isn’t just any plug-in hybrid. You’re in BMW’s plug-in hybrid.

Naturally, the 330e may not be as racy as its M340i brother or as light and visceral as its forefathers, but the hardware here was mostly solid. Adaptive M suspension meant the ride was communicative but far from uncomfortable while steering was fairly quick, sharp, predictable, and nicely weighted, despite being more insulated than I would have liked. Its handling was very competent and unflamboyant. 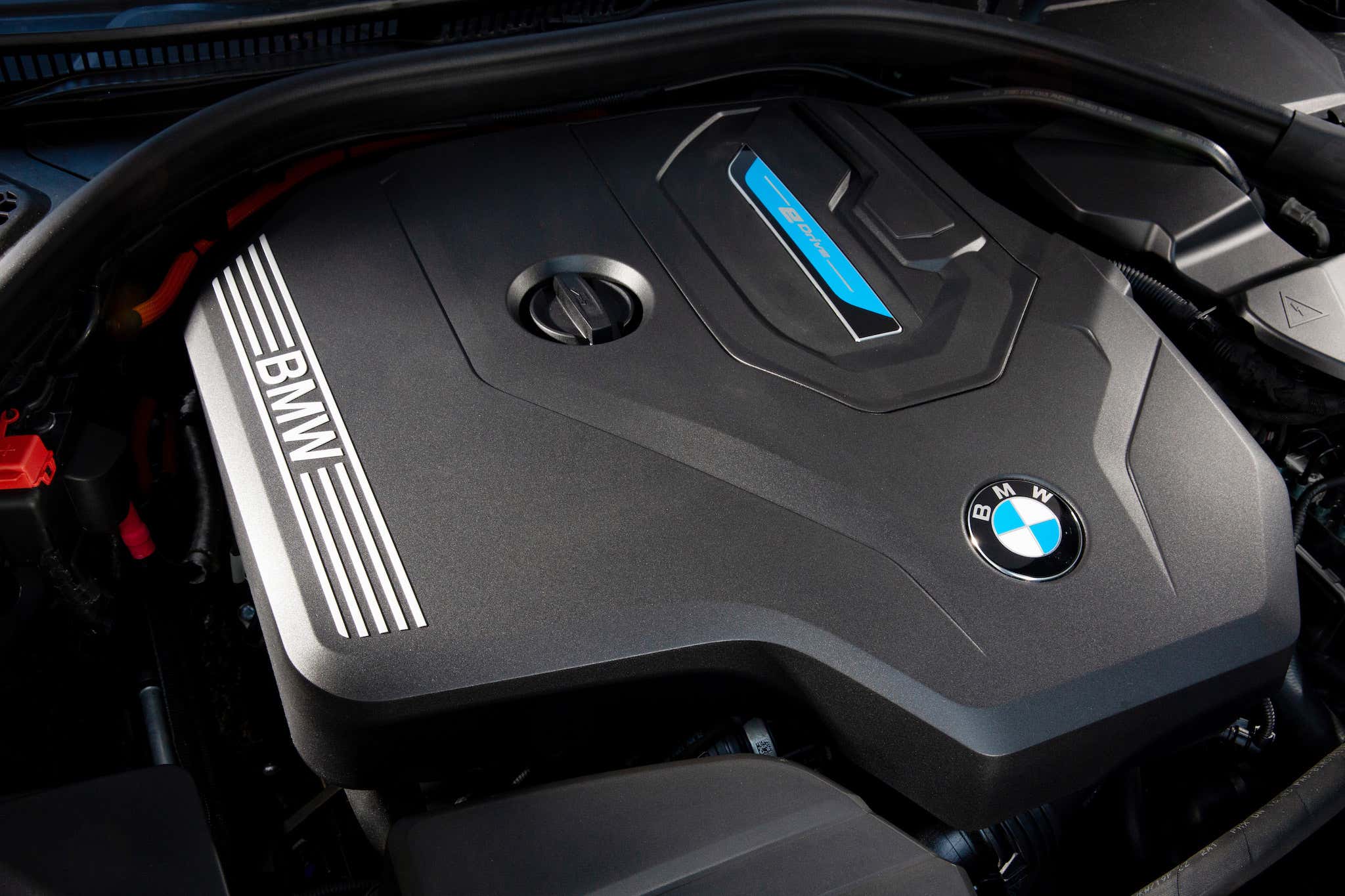 The eight-speed automatic gearbox reacted to pulls of the steering wheel paddles quickly and was really good at predicting what gear it should be in in full-automatic mode. The rear-biased xDrive all-wheel-drive system sent all of the power to the rear axle most of the time and shuffled it to the front only as needed.

BMW is officially claiming 20 miles of electric-only range from a full charge, and I was able to drive a distance of 15 mostly highway miles without using a drop of fuel in frosty February Toronto weather. If you were to drive a fully charged 330e in warmer, ideal conditions with more care, I wouldn’t doubt its ability to come quite close to, if not match, that 20-mile rating. The EPA says this car should get 67 equivalent miles per gallon with the electric motor in play and 25 mpg relying on just the gas engine. Top electric-only speed is capped at a sufficient 87 mph.

The Volvo S60 AWD PHEV, meanwhile, is EPA-rated for 69 (nice) mpge and 30 mpg undergoing the same tests. After a week of mixed cold-weather driving, with no additional visits to a charger, the 330e showed 26 overall mpg on its onboard fuel economy-ometer. 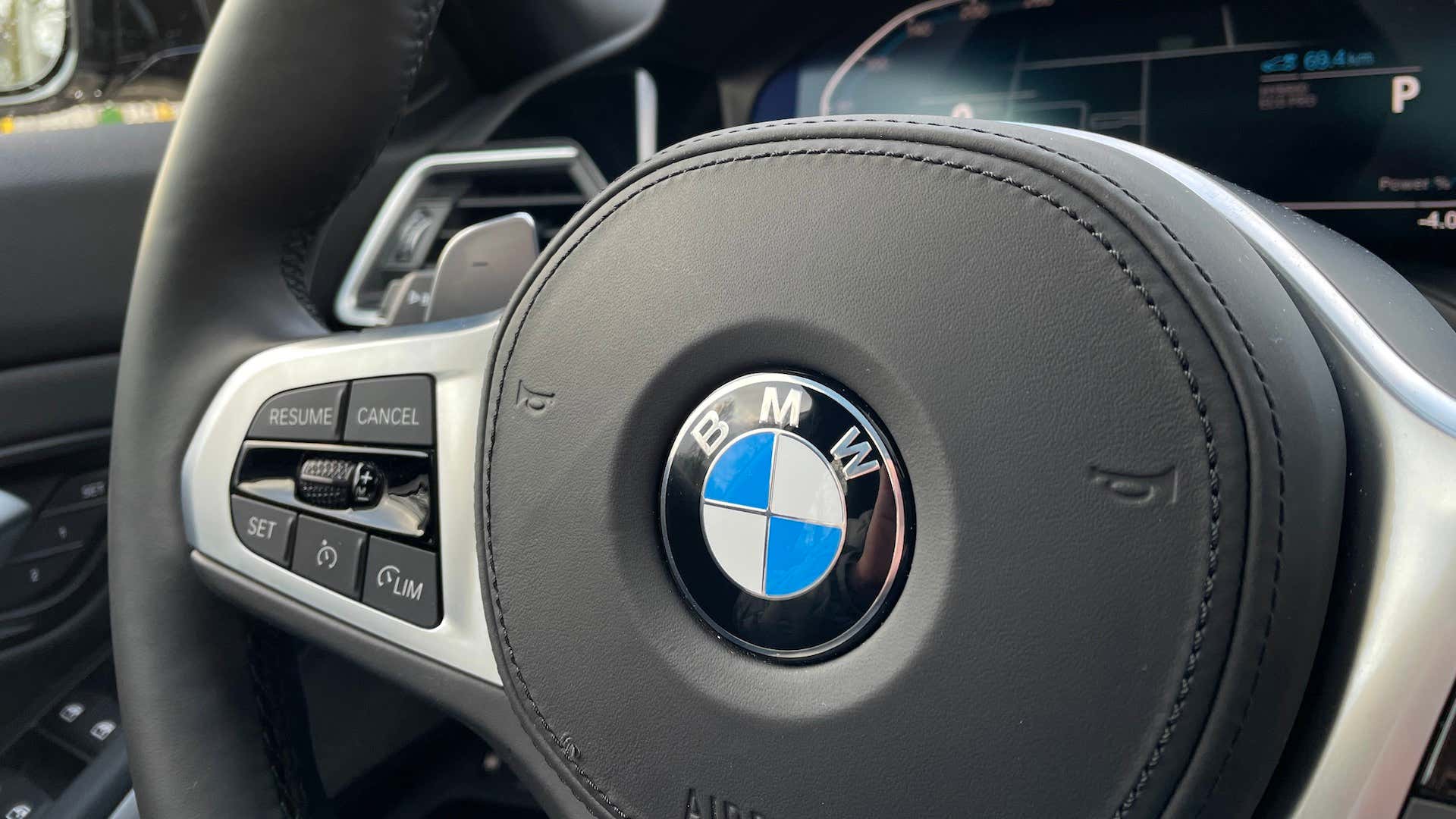 Look, in theory, the 2021 BMW 330e is a perfectly capable automobile. It’s quite fast, well-behaved in the corners, practical, inoffensive to behold (not a given with BMW these days), comfortable to live with, built to a high standard, and, thanks to the fact that it’s a plug-in hybrid, quite fuel-efficient. When the rubber meets the road, however, it feels more than a little clinical. Driving it, being in it—you get the sense that those responsible for its existence are, make no mistake, very good at their jobs. But it also feels like they didn’t really care to make the 330e enjoyable to drive all that much. 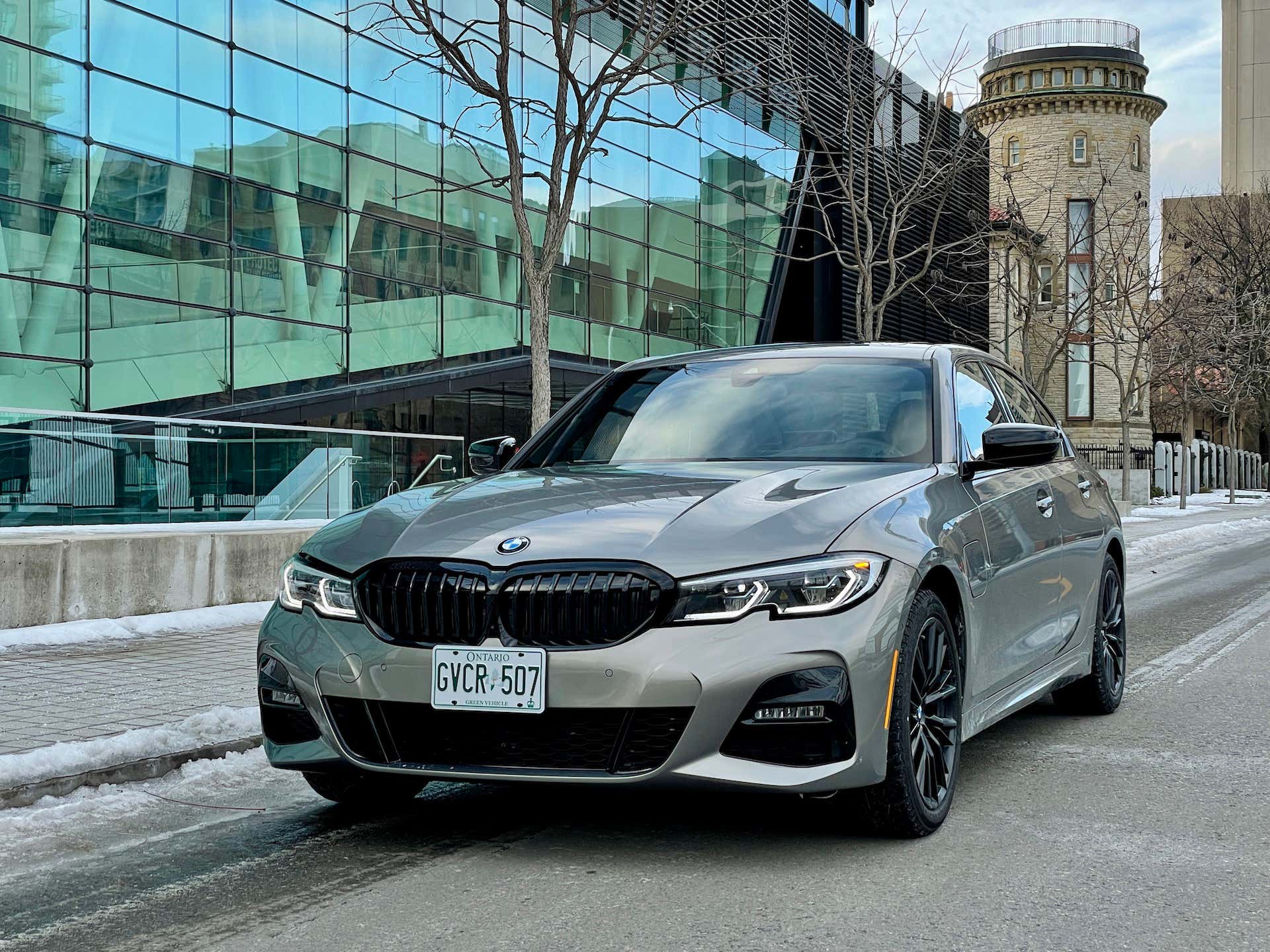 The 330e feels like the result of BMW working to comply with the EPA’s CAFE standards, a 67-mpge box for the automaker to tick so it can then turn around and stick twin-turbo V8s into 5,400-pound, high-performance SUVs. And before you descend into the comments and say, “It’s a gray German plug-in hybrid sedan for budding dentists and recent MBA grads, what did you expect?” let me remind you that plug-in luxury rides of this general caliber can be good and have character. Just ask Volvo.

While objectively inoffensive, I just couldn’t find the 330e particularly fun. Perhaps I expected too much from a non-M BMW, but given this brand’s heritage, I wanted more from the 330e’s driving experience. I wanted its driving position to be lower. I wanted its steering to feel more precise and pure even in non-performance driving situations and modes. I wanted its brake pedal to be more responsive to minor adjustments and feel more natural to operate. I wanted it to be a Kia Stinger.

BMW gave the 330e one of the best infotainment systems in the business and its buyers the gas-sipping, plug-in life. But the supposed “sheer driving pleasure” it touts so aggressively was noticeably absent. In its place is a car that’s polite enough and will do everything you ask it to except inspire much joy. It’s hard not to wonder if that joy was reserved exclusively for the more powerful and far more gas-guzzling M models.

If that’s the case, you also have to wonder what the incentive to buy the 330e is at all. 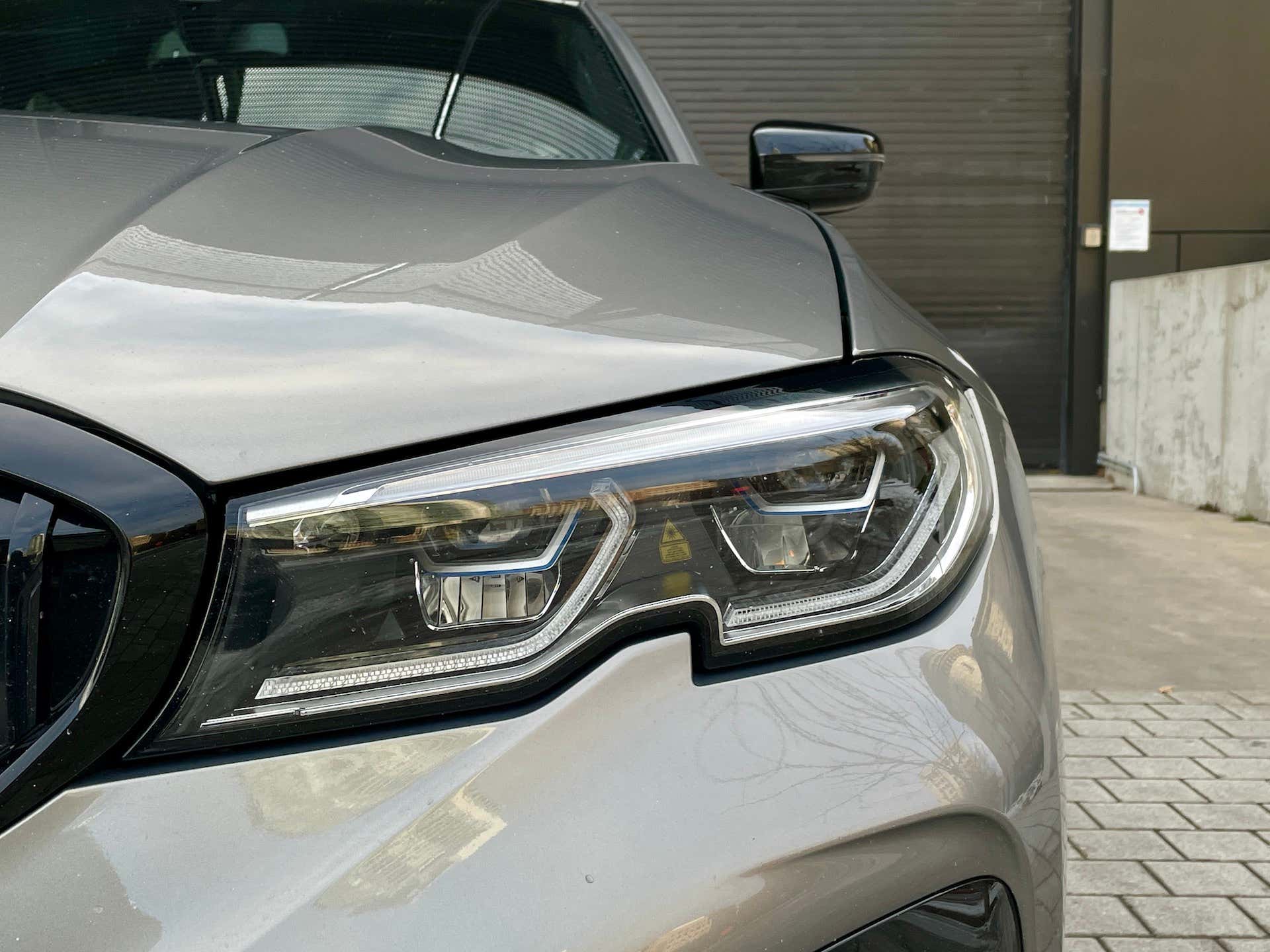