The Infiniti Q60 is Infiniti’s answer to the Audi A5, BMW 4 Series, and Lexus RC. Or, it was back in 2016 when its current iteration was released. The same, old, essentially un-updated Q60 is still for sale five years later and its competition has blown far past it in terms of comfort and technology. It shows. You wouldn’t think the top-trim 2021 Infiniti Q60 Red Sport 400 AWD is a serious competitor to anything new from Germany or Japan.

But that’s not the whole story. Not by a long shot. The Red Sport 400 AWD may be far too pricey for what it is at $62,125, but underneath its eye-catching skin there’s still an excellent vehicle—and surprisingly, a glimpse of what’s ahead for Infiniti’s parent company Nissan. It’s a positively outdated and overpriced car that, even after Infiniti took it back, sticks in my mind like glue. 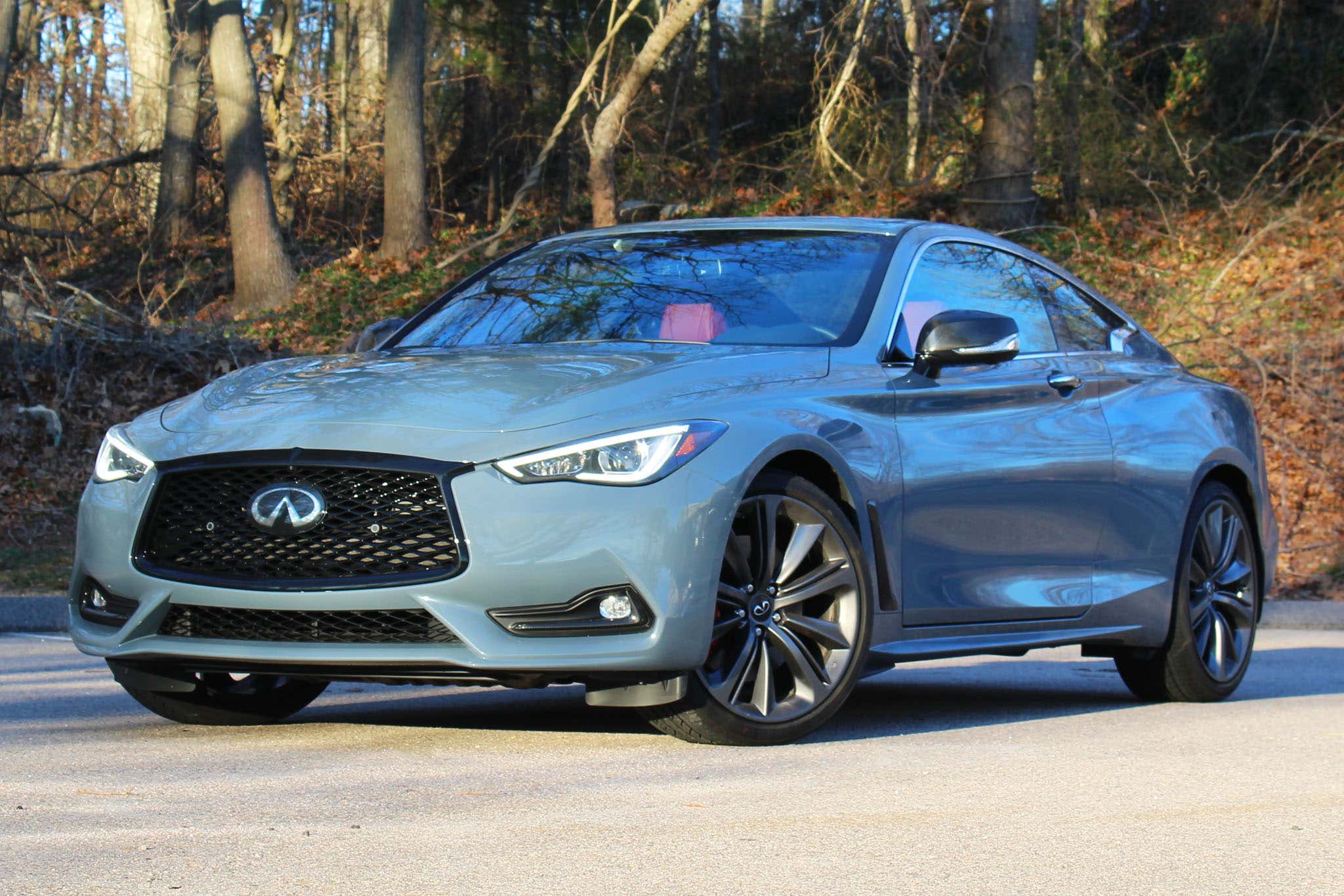 First of all, the specifications of this car don’t read like any other Nissan products—besides the closely related Q50. It’s a rear-wheel-drive platform with available all-wheel-drive. Sending power to those wheels through a seven-speed automatic transmission is a twin-turbocharged 3.0-liter V6, known internally as the VR30DDTT. In the top trim Red Sport 400 cars, it’s boosted all the way up to, you guessed it, 400 horsepower.

The current-generation Q60 was released in 2016. The Q60 before this was a re-named G37 and that’s not what we’re talking about today. This latest Q60 isn’t just a tarted-up version of a previous-generation car.

Technology-wise, the Q60 is still living in 2016, though. It won’t actively follow the lane you’re in—only warn you when you’re leaving it—ventilated seats are not even an option on this luxury coupe costing $65,000 as tested. And for some reason, it still has Infiniti’s incredibly-dated twin-screen infotainment system. 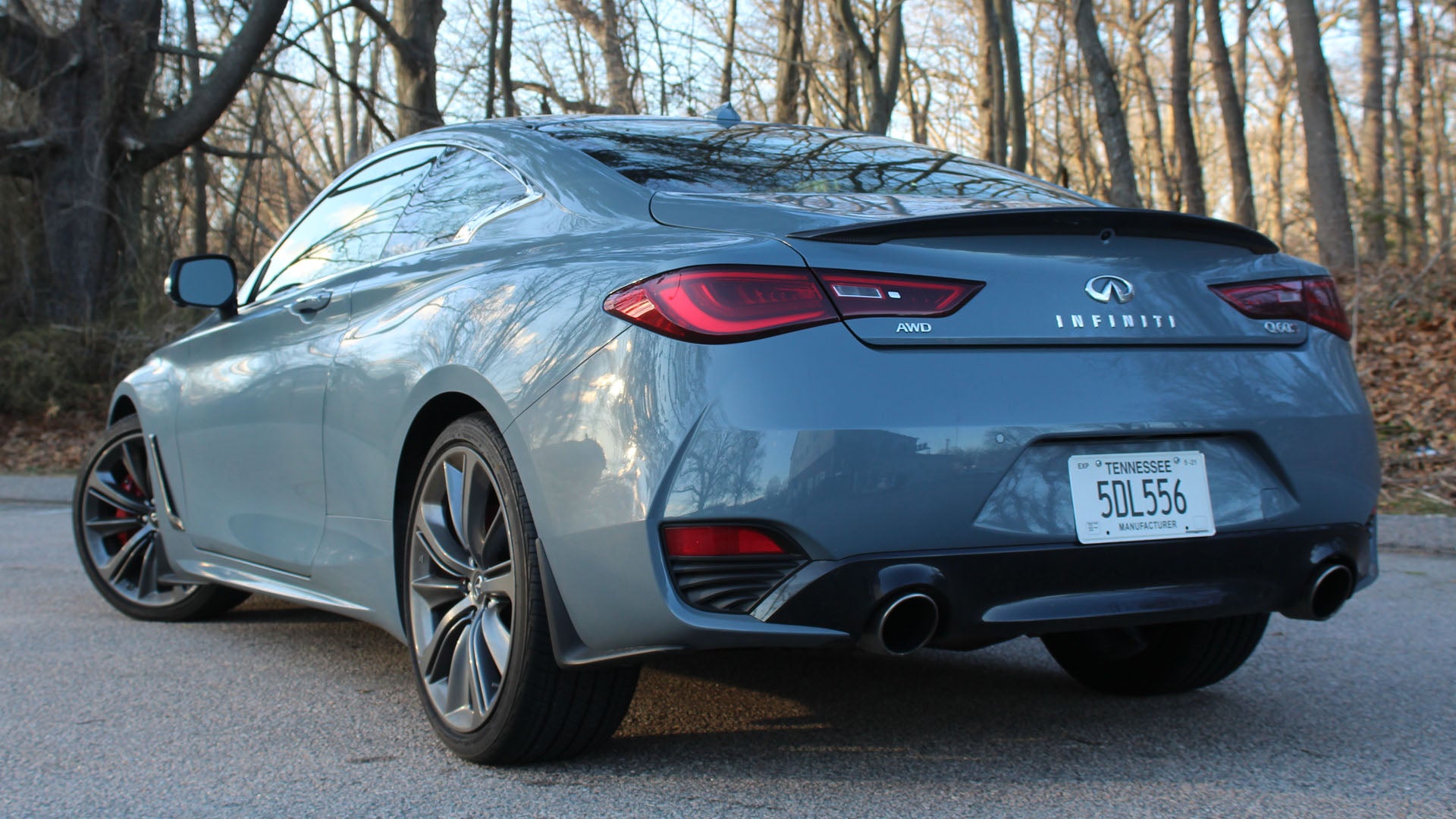 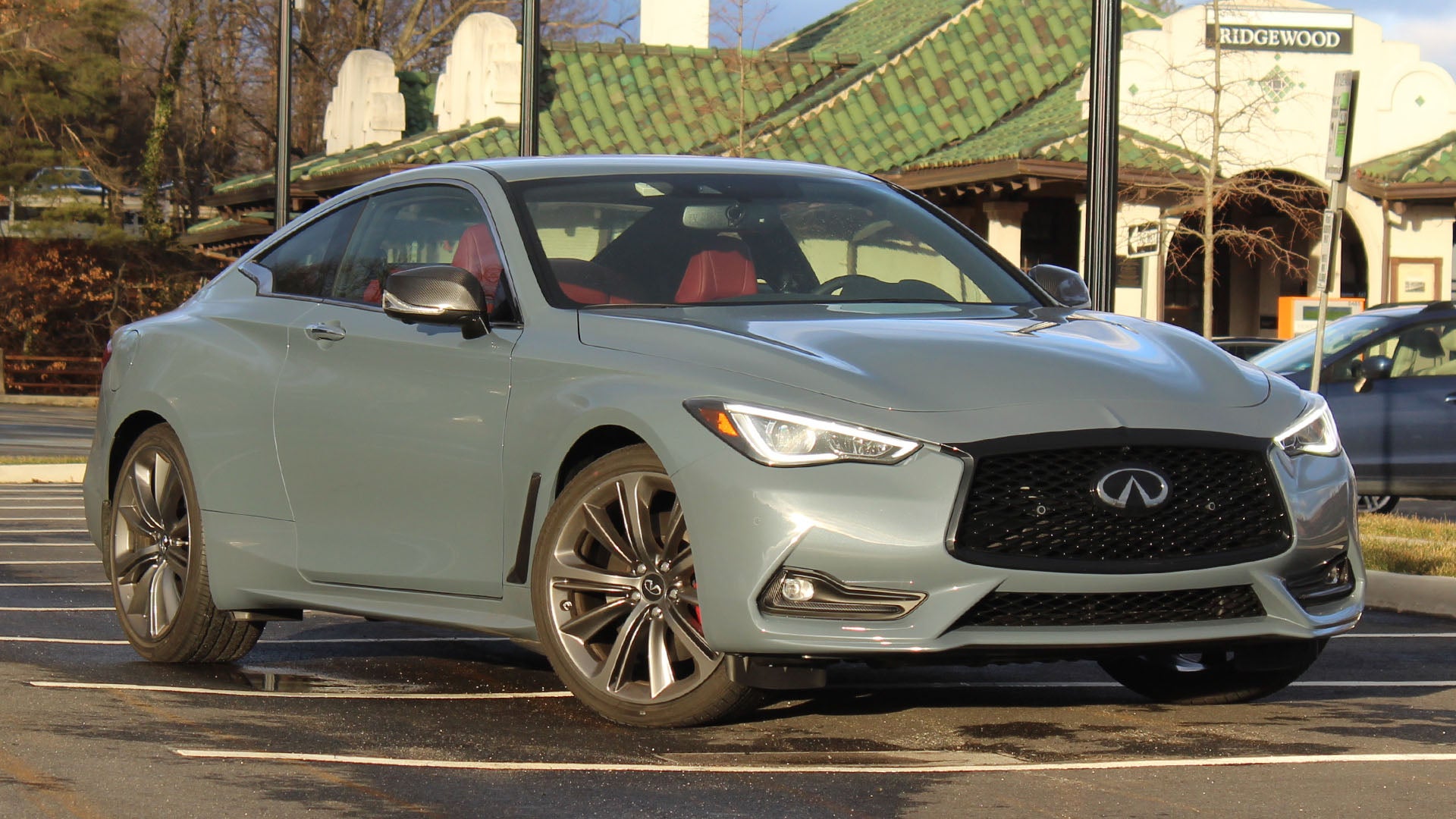 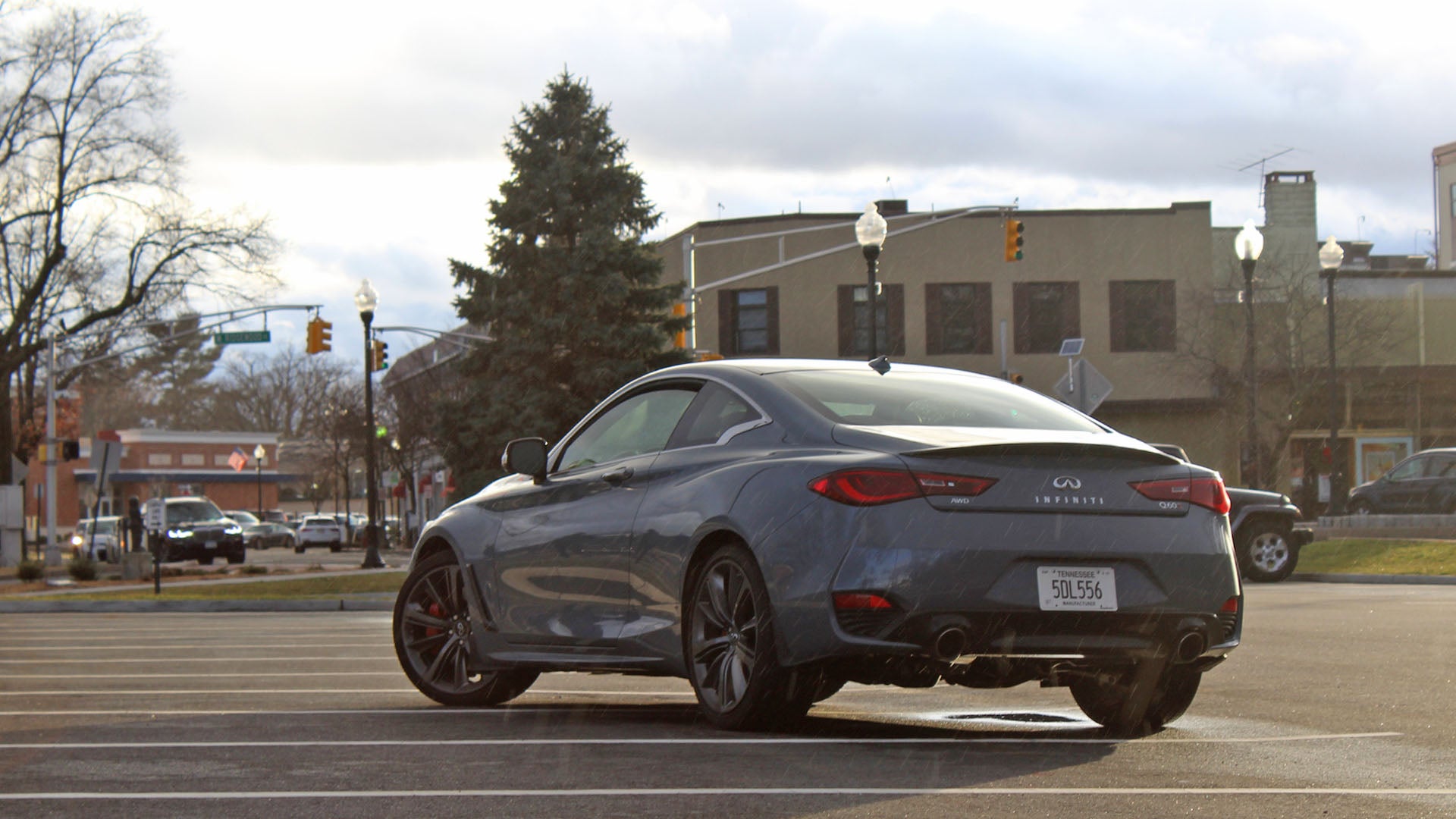 When I first picked this car up and drove it down the highway, I had other bad impressions as well. The exhaust droned just enough to bother me, the 20-inch wheels had me bracing for potholes, and the transmission displayed its malcontent side. It’s slow to shift, can’t make up its mind on what gear to give you, and the engine battles the torque converter, producing awkward CVT-esque roars. I was, to be frank, disappointed.

Then, I took it to see some friends in New Jersey and everything changed. Slowly but surely, the Q60 began to make a shockingly strong case for itself.

The transmission in this car is one of the worst parts of it. But if you put it in Sport Plus, the most aggressive setting, it works well enough to get the job done. I put it in this setting and left it there. Only then did any issues I had with the car’s transmission slowly melt out of my mind. Likewise, I discovered it would hold gears for you no matter what when you changed them manually. That was a level of control—still not available on some modern, ostensibly performance cars—I wasn’t expecting from a transmission that otherwise couldn’t make a decision to save its life. 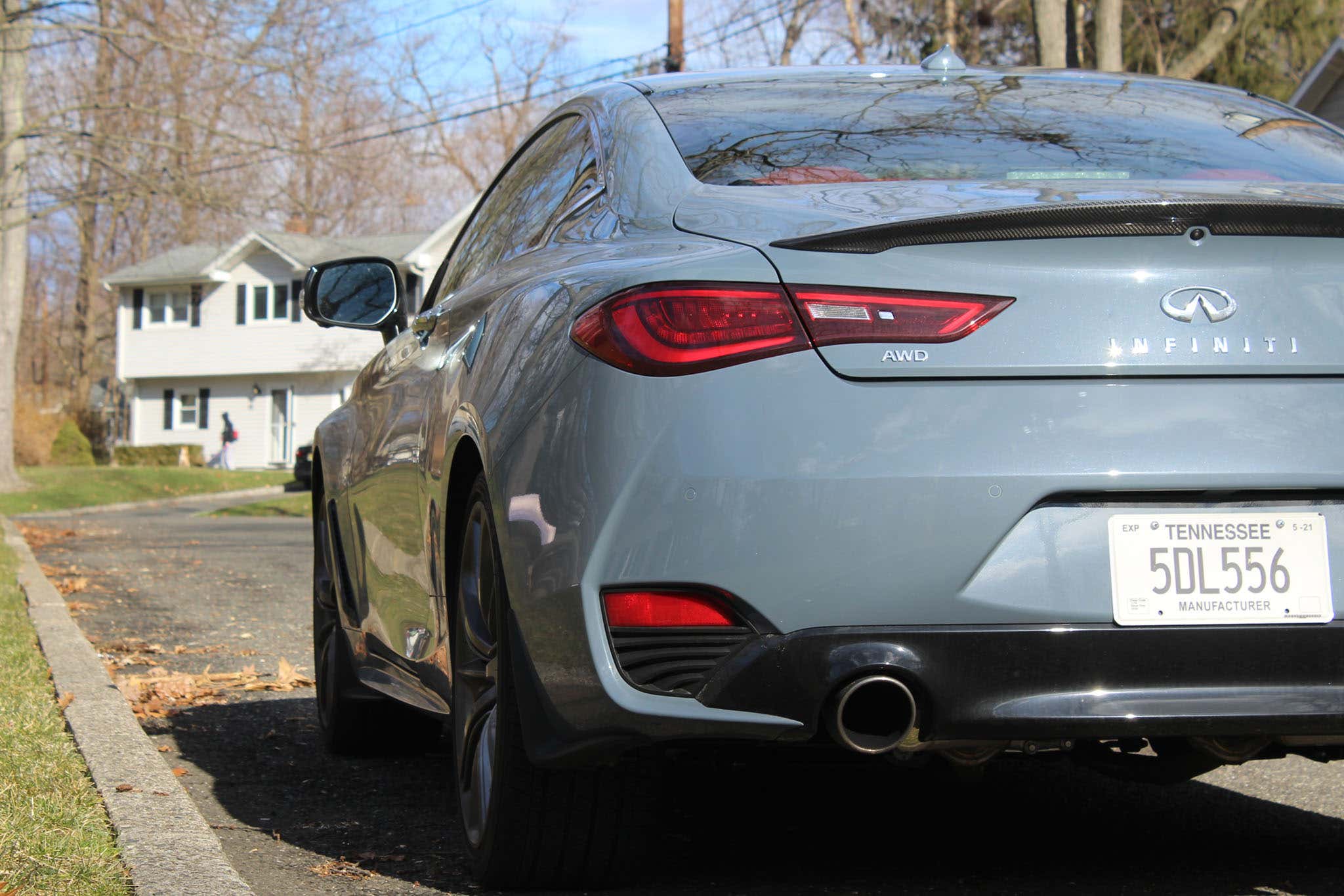 Likewise, the engine that droned on the highway showed its true colors on a spirited drive. At redline, it sounded incredible. The aural experience at 7,000 rpm made me want to forgive the car for all of the bad things it had ever done. Just keep making that noise! Forget anything I said before! From the inside, it was loud. I thought to myself, “That’s just some sort of digital piped-in speaker noise.” It wasn’t. It was truly loud from the outside, but far from raucous and unrefined like engines previously found in this car’s predecessors, the G35 and G37. It was a proud, technical, turbocharged harmony.

And it made this awe-inspiring noise while sending 400 HP to all four wheels. If you read a lot of spec sheets in your spare time, 400 HP might not sound terribly impressive anymore, but trust me when I say it’s a legitimate, ground-pounding 400 HP. The Q60 will dust most other cars on the highway and drag itself off the line in a stunning show of force, pushing you back into your seat with determination. It still gets better, though.

The 20-inch rubber on this car positively ruined the ride, but the complete utter lack of sidewall deflection went well with a chassis that can only be described as a nearly-perfect. Perhaps it’s because this particular Q60 was all-wheel-drive or maybe it was just my on-road caution, but at no point on any spirited drive did it feel like this car was anywhere
close to giving in. The well-weighted steering tells you just enough about what’s going on and there was a sense of neither understeer nor oversteer—it was tied down tight.

While the interior offered little appeal in terms of technology, it was beautifully upholstered and pleasing to the eye. The red leather is as photogenic as its lovable exterior, and even though the seats won’t keep you cool, they will always keep you planted in the corners. To just mention the exterior once would be doing it a disservice, though: I received several unprovoked compliments from strangers on how stunning this car looked. It has a unique form language that was center-stage thanks to its premium Slate Grey paint, an extra $695. 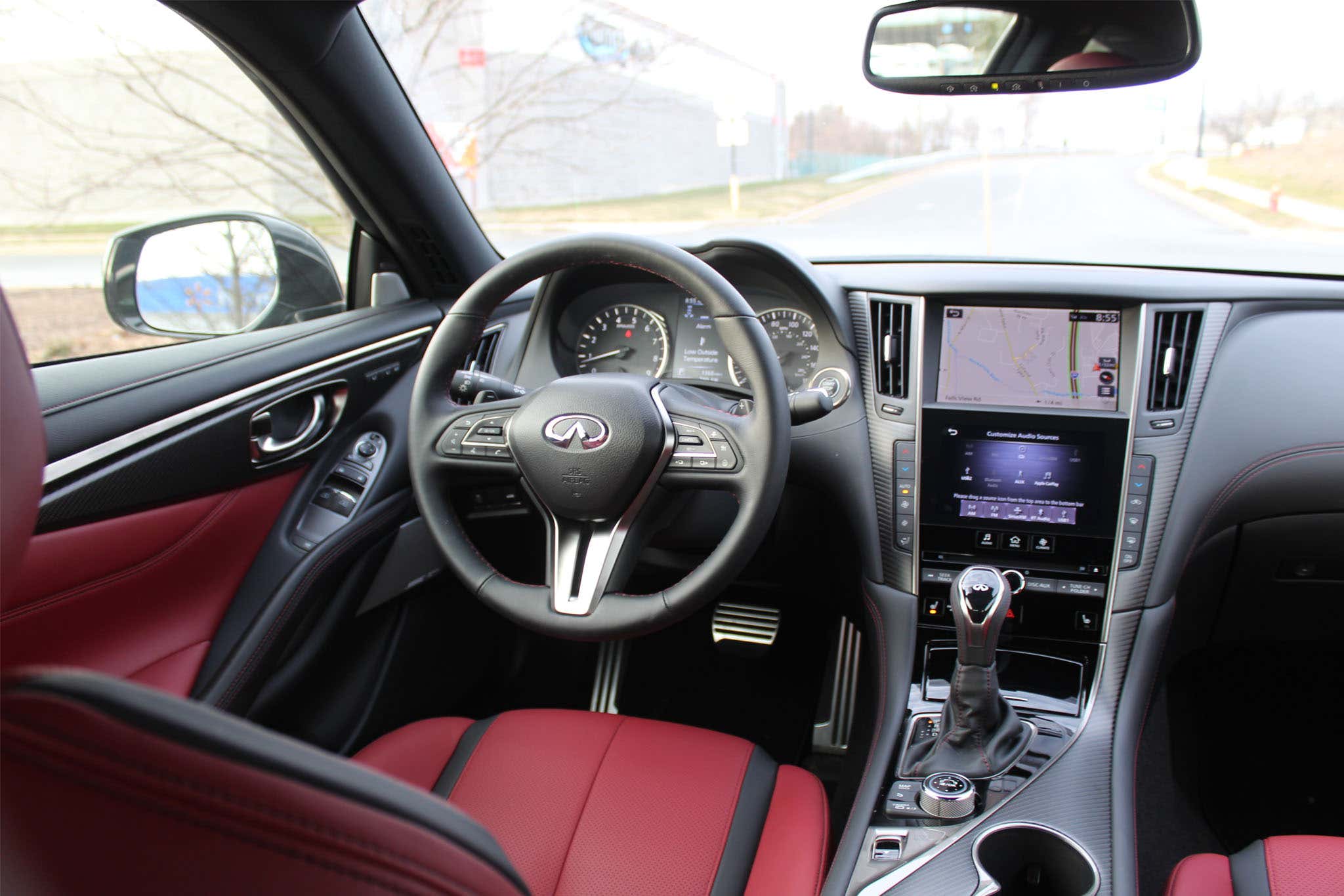 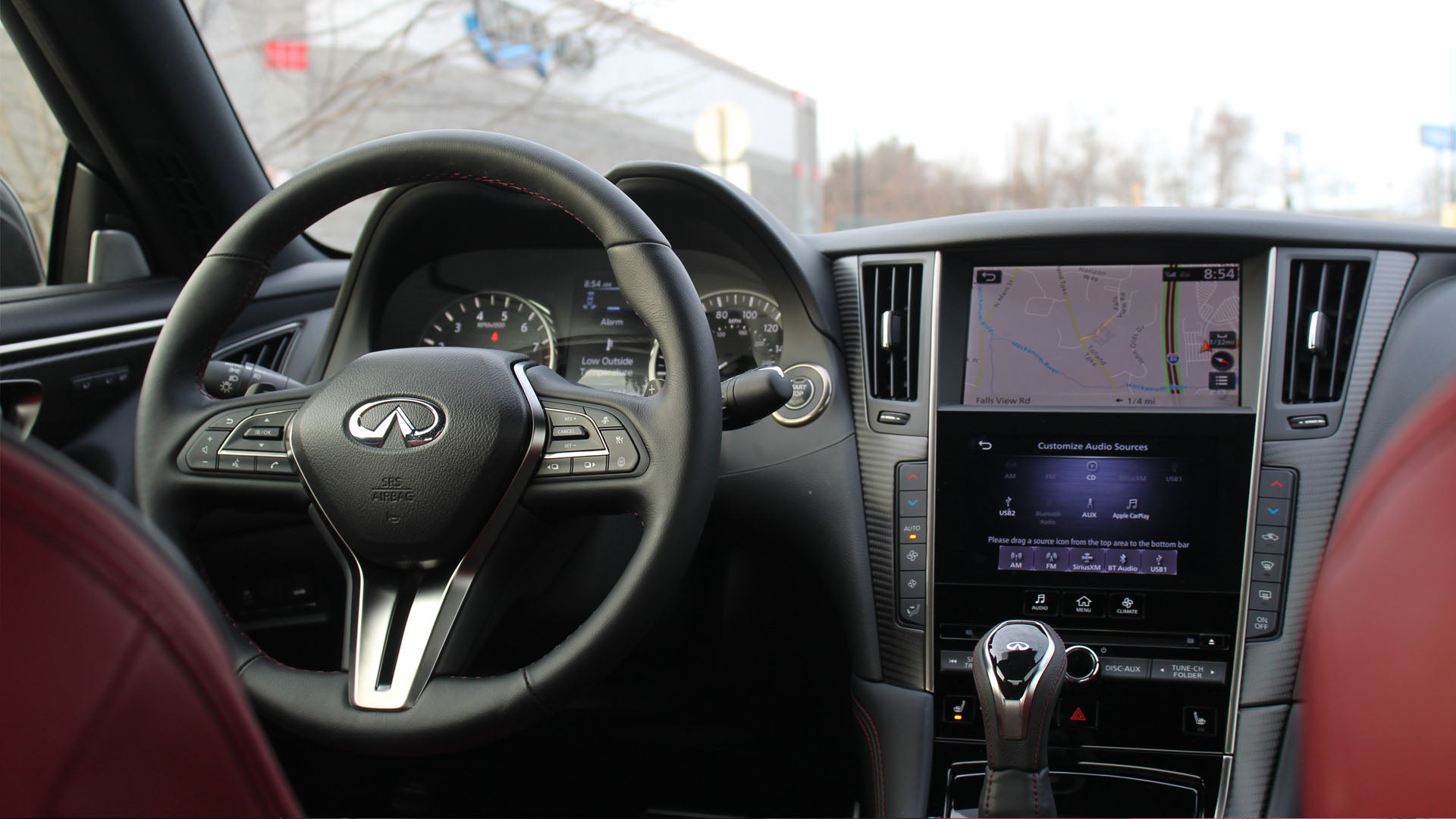 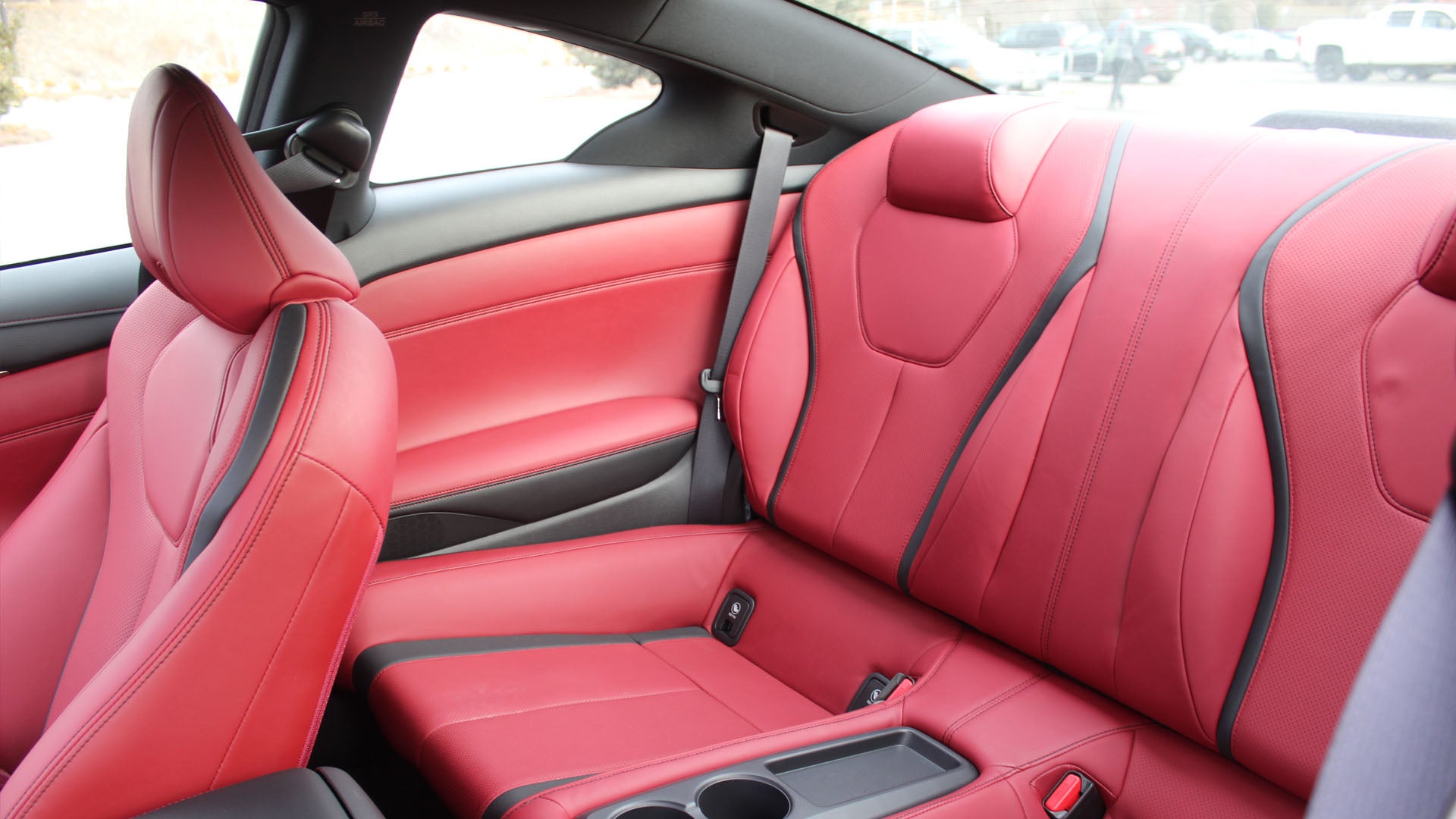 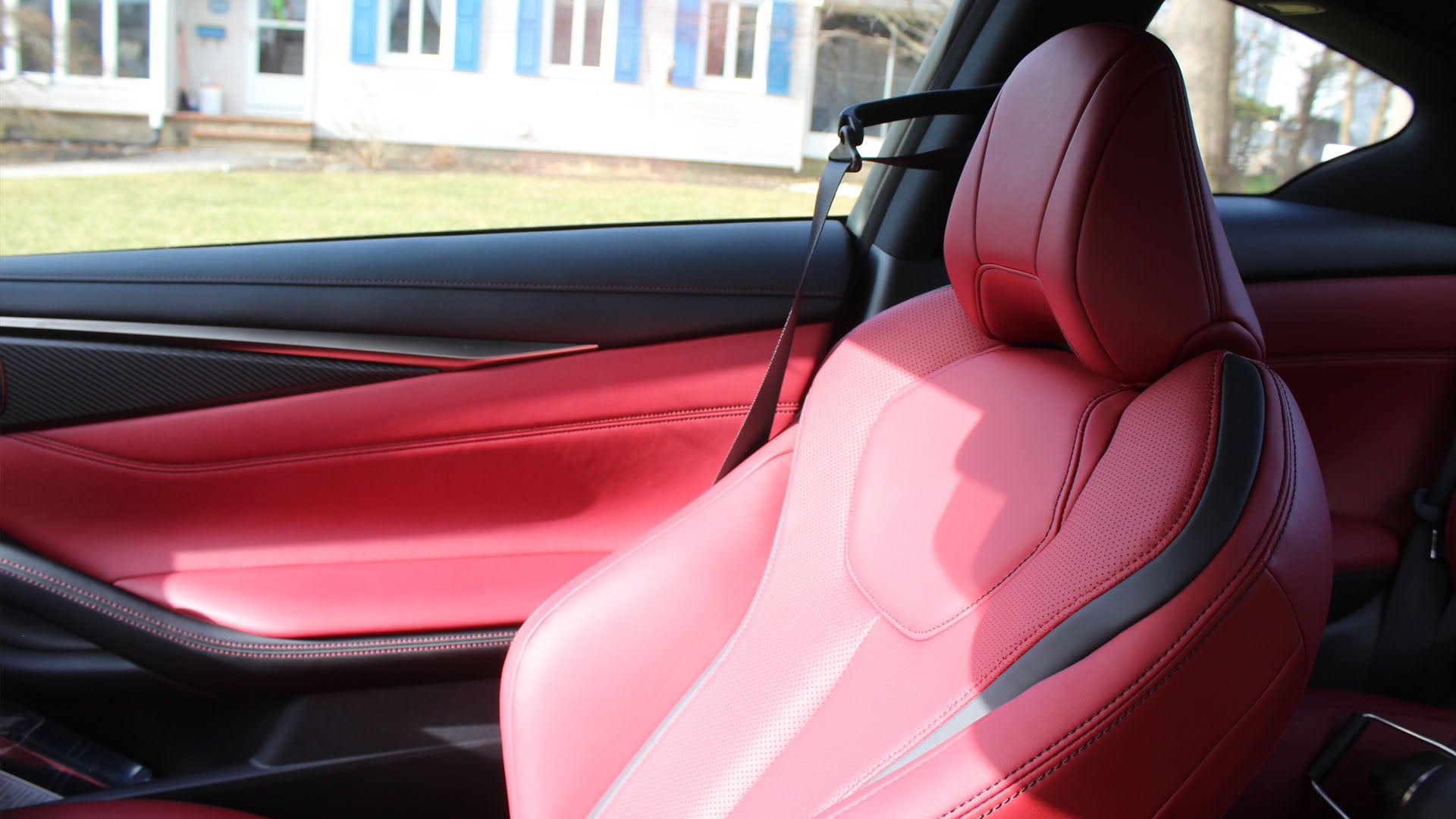 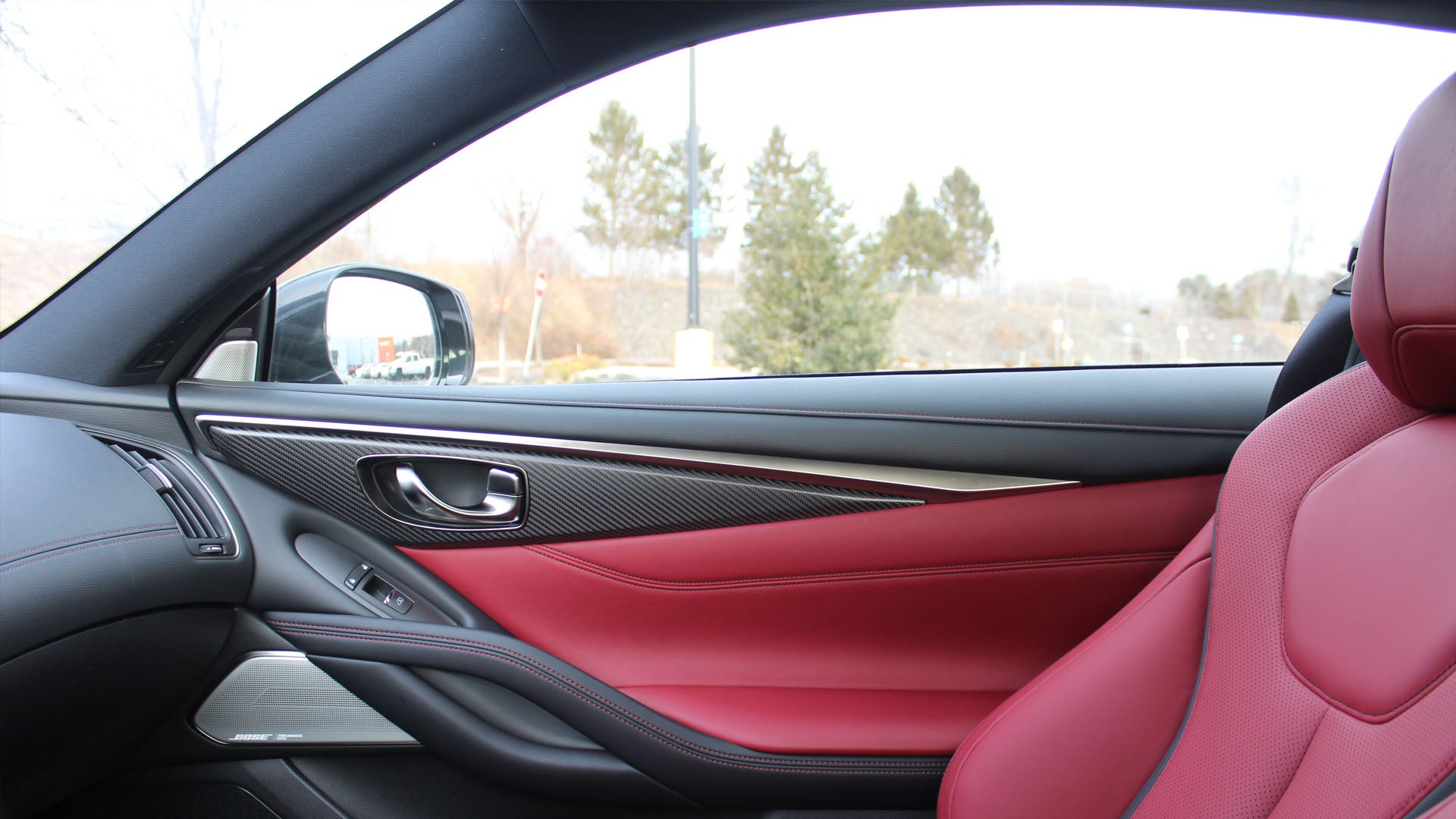 Your Questions About the 2021 Infiniti Q60, Answered

I asked you, the readers, if you had any questions for me back when Infiniti loaned me this car a few months back. I know it’s been a while, but if you’re a long-time loyal reader and asked a question back then, it’s getting answered now. Good things come to those who wait!

Q: I realize it’s apples-to-oranges, but how does it compare to the Kia K5 GT you reviewed?  Is there $30k worth of difference? — Carmudgeon

The short answer is no. If you were going to buy a new car to drive every day and have a bit of fun with, the K5 beats it pretty squarely. Sure the Kia is front-wheel-drive, but it handles nearly as well and has a ton of standard equipment—including ventilated seats which aren’t even offered on the Infiniti. It’s also about half the price so that seals the deal. Kia’s excellent highway drive-assists are also a big nail in the Infiniti’s coffin.

If you wanted to buy either used, that’s where the Infiniti is really appealing. The Q60 is more fun to drive and with used prices now hovering around $25,000 to $35,000, it could be a good buy. Personally, if it was my money, I would get still the Kia, though.

Q: Would a 370z transmission swap make it more fun? Or is the auto good enough? — RC Gartner

The transmission in this car is pretty bad. Yes, a stick shift would make this car a lot more fun and a lot less frustrating.

Q: How would this compare to a Mustang Ecoboost or GT? — AlphaStrike

I’ve only driven a Mustang GT but the stick in the GT just makes it a better car. The interior in the Mustang just is not great—the Infiniti beats it squarely there—but it’s hard to top a stick-shift V8. The V6 in this car is great, but the transmission just has it by the neck in normal driving situations.

Q: I think the real question is why buy new on these? — Mane

I really have trouble answering that question myself. I would imagine dealerships are really trying to get rid of these things at this point, so if you can work out a deal with them to get one at a serious discount, it might be worth getting new. They do depreciate like rocks, though. As I mentioned before, used ones are already below $35,000. The sad fact—for Infiniti—is there’s no real reason to not buy used. The car badly needs an update it’s likely not going to get, as electrification appears to be Infiniti’s top priority now.

Answering your questions and all of this talk of improving the car got me thinking. Replace the transmission with a better one—a stick might actually be ideal here—strip out the gimmicks like the double screen infotainment, but keep the god-given twin-turbo V6 with 400 HP. Give it a restyle, get it down to a lower price, and well, you might be getting the picture here. That car—the Q60 minus all the bad stuff—is real. In fact, it’s going to start hitting dealership lots soon. It’s the new Z.

This engine deserves a stick shift and it deserves to be put in a more accessible car. That’s most likely happening and I can’t help but be thrilled with the possibility. As much as I liked the Q60, I imagine the new Z is just going to be that much better. Just by replacing the transmission and lowering the price, it has to be. On paper, at least.

I can’t in good faith tell you to buy this particular five-year-old car for brand-new car money. (It does get a lot more enticing when used or with a heavy dealer discount, though.) But I can tell you to get excited for a future Nissan product. That feels good. 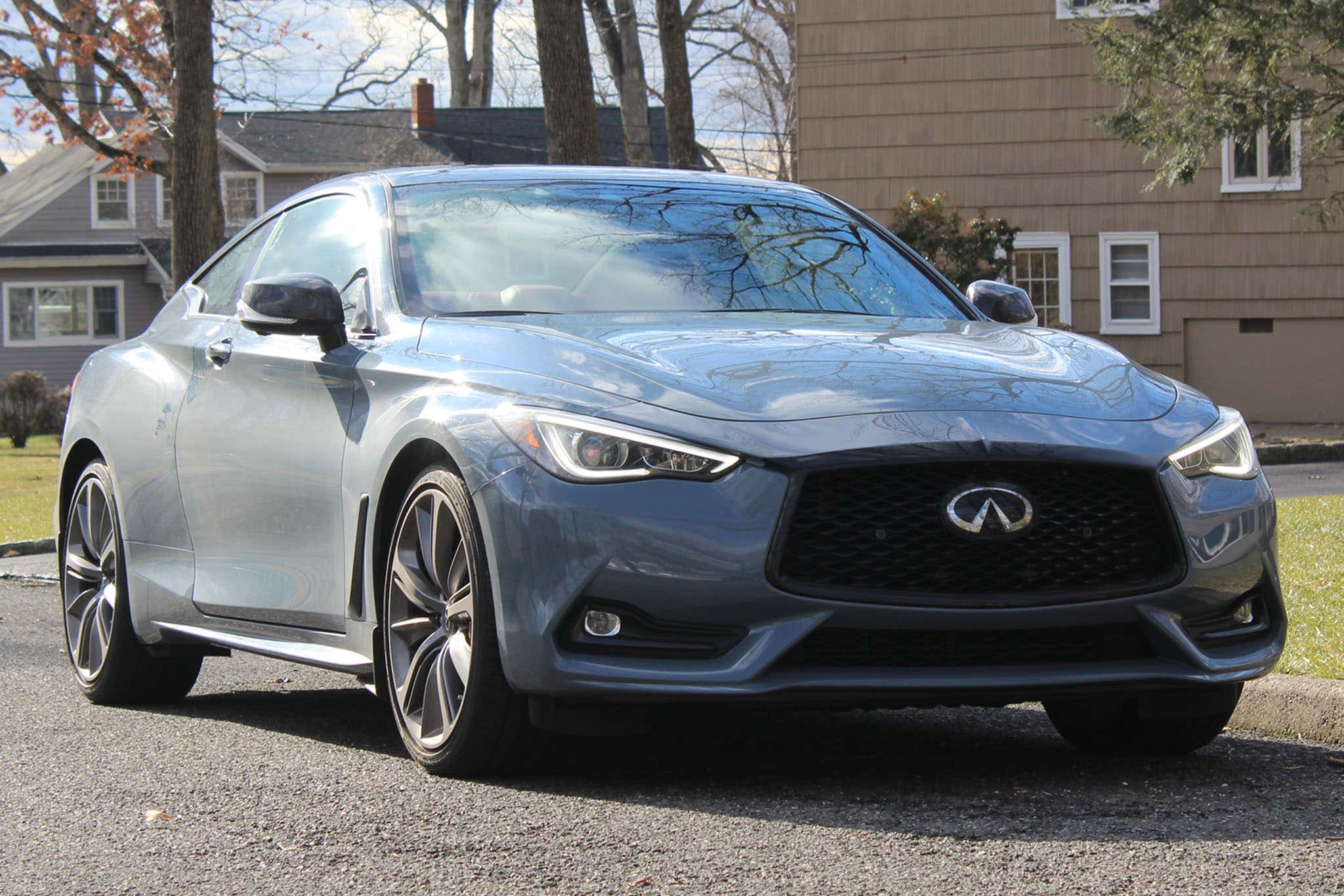 So while the Q60 is far from perfect, its driving attitude is something of a preview for what’s to come. The new Z will likely sit on a re-worked version of this platform—which also underpins the 370Z—and with the VR30DETT, it’s a stellar combo. Despite its flaws, it was one of the few truly memorable cars I’ve driven recently and a lot of fun on a twisty back road. It could ride a lot better, drone a little less, but when you put your foot down it’s a tunnel-vision experience. It’s noise, it’s power. Nothing else matters at 7,000 rpm and you don’t forget it. I certainly haven’t.