Earlier this year, I had the distinct pleasure of driving the Canada-only, manual transmission Nissan Sentra and found it to be a surprisingly fun car with a surprisingly nice gearbox. In this second installment of a recurring column I’m christening right now (without editor approval) as “Chris Drives a Manual Economy Car You Can Only Get In Canada,” I got to spend some time behind the wheel of a three-pedal 2021 Kia Forte5 GT to see if it would cast a similar spell. [Ed. note: Column approved — KL]

An inexpensive, manual hatchback with more power than the new Honda Civic Si, red center wheel caps, and born out of the same company that gave us the Stinger? “Sign me the fuck up for what is surely an under-the-radar bundle of fun,” I said. Granted, you can get a Kia Forte with the manual transmission in the U.S., too, but the car is only available as a sedan and is therefore not as cool as the Canada-only special. 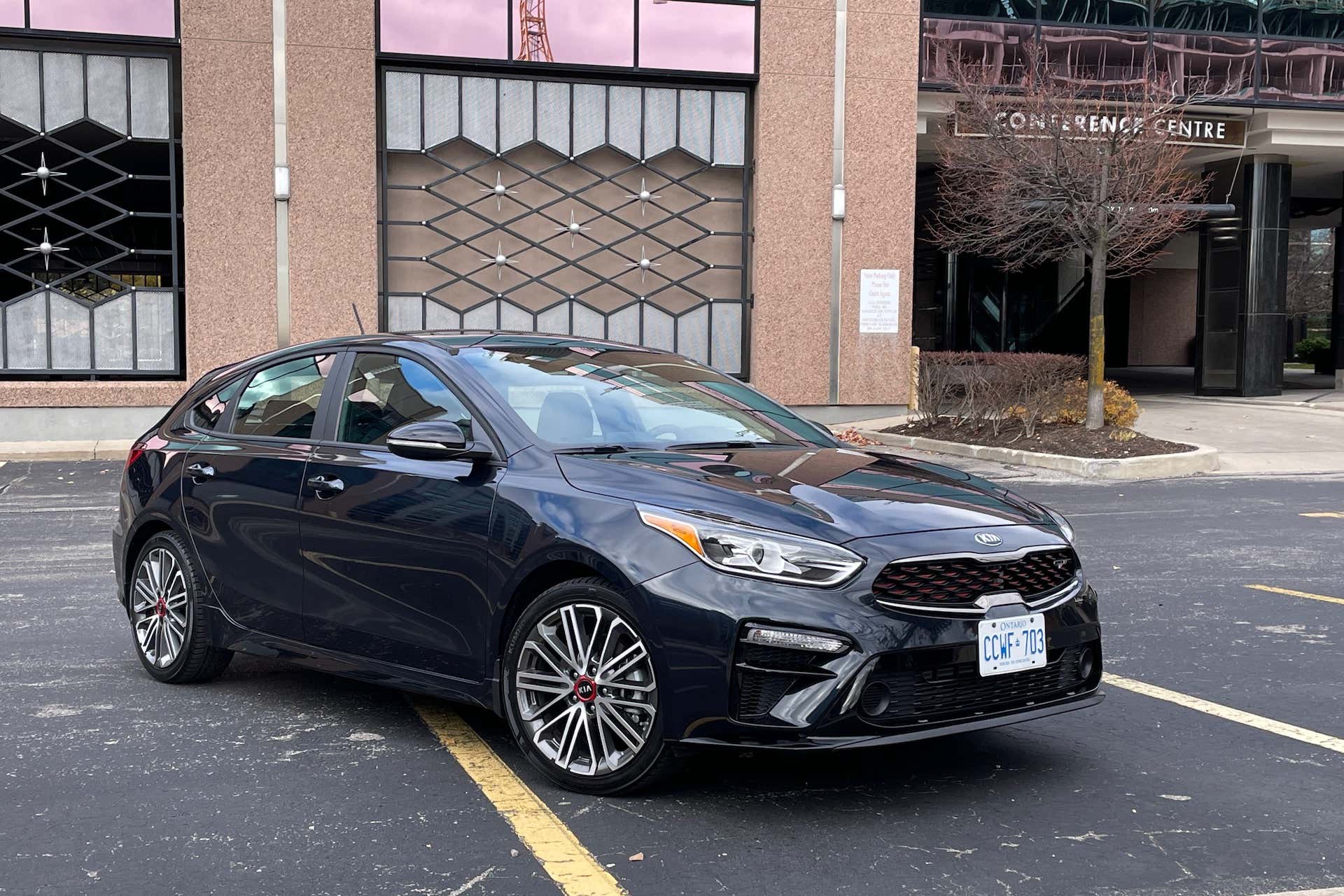 Given my enormous surprise with how much I liked the manual Sentra, I thought the manual Forte5 would bode the same. I was wrong.

Slotting above the subcompact Rio and underneath the mid-size K5, the Forte is Kia’s compact car, an alternative to stuff like the Toyota Corolla, Honda Civic, and Hyundai Elantra. The little 5 that comes right after its name sans space denotes the Canada- and Mexico-only hatchback option in North America. The hatch element not only makes the Forte a more practical car, but it’s also a way better-looking one as well. (If you are indeed Canadian, it’ll probably also be quite unique because even though the Forte5 is sold here, this press unit is the only one I recall ever seeing in the flesh.) 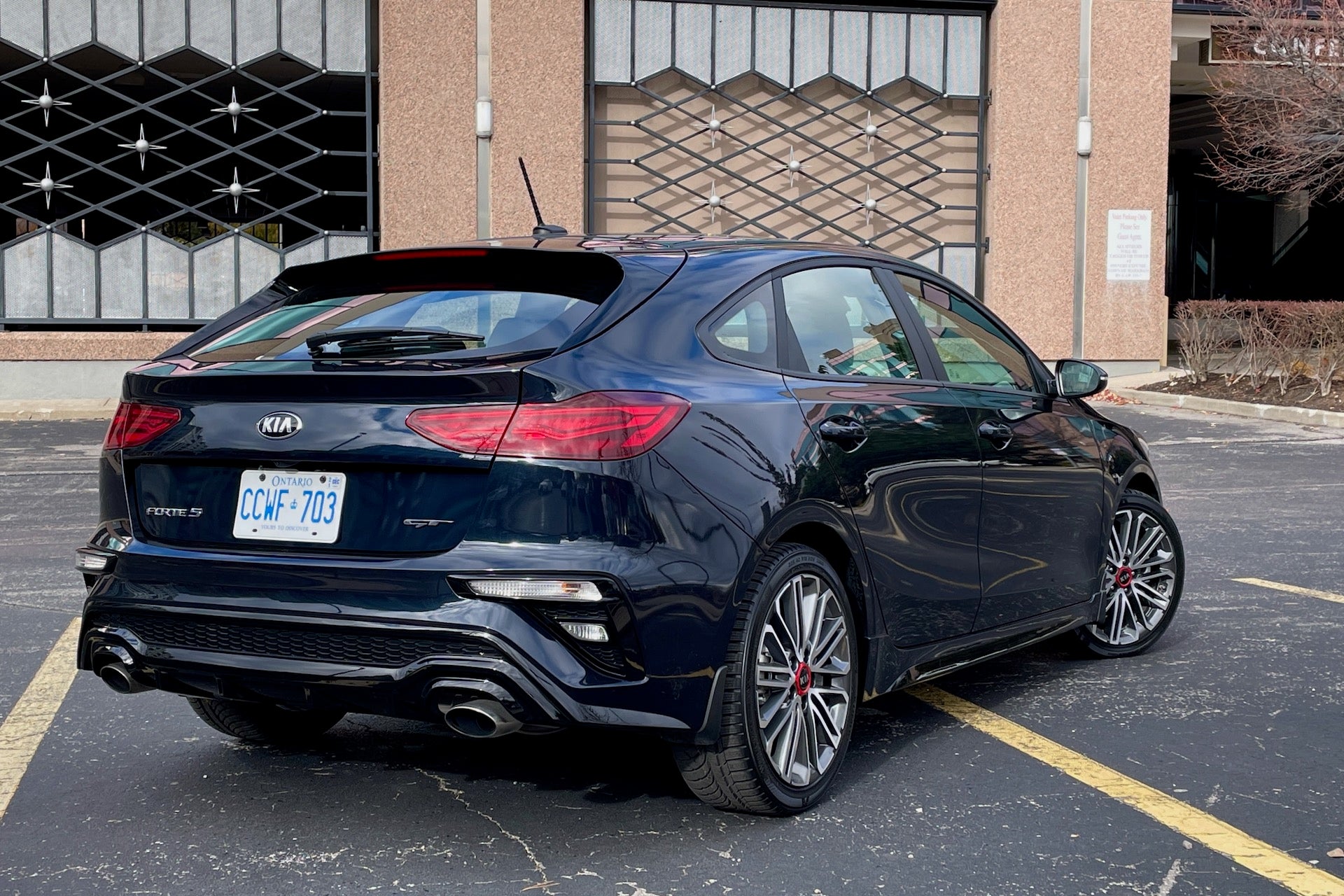 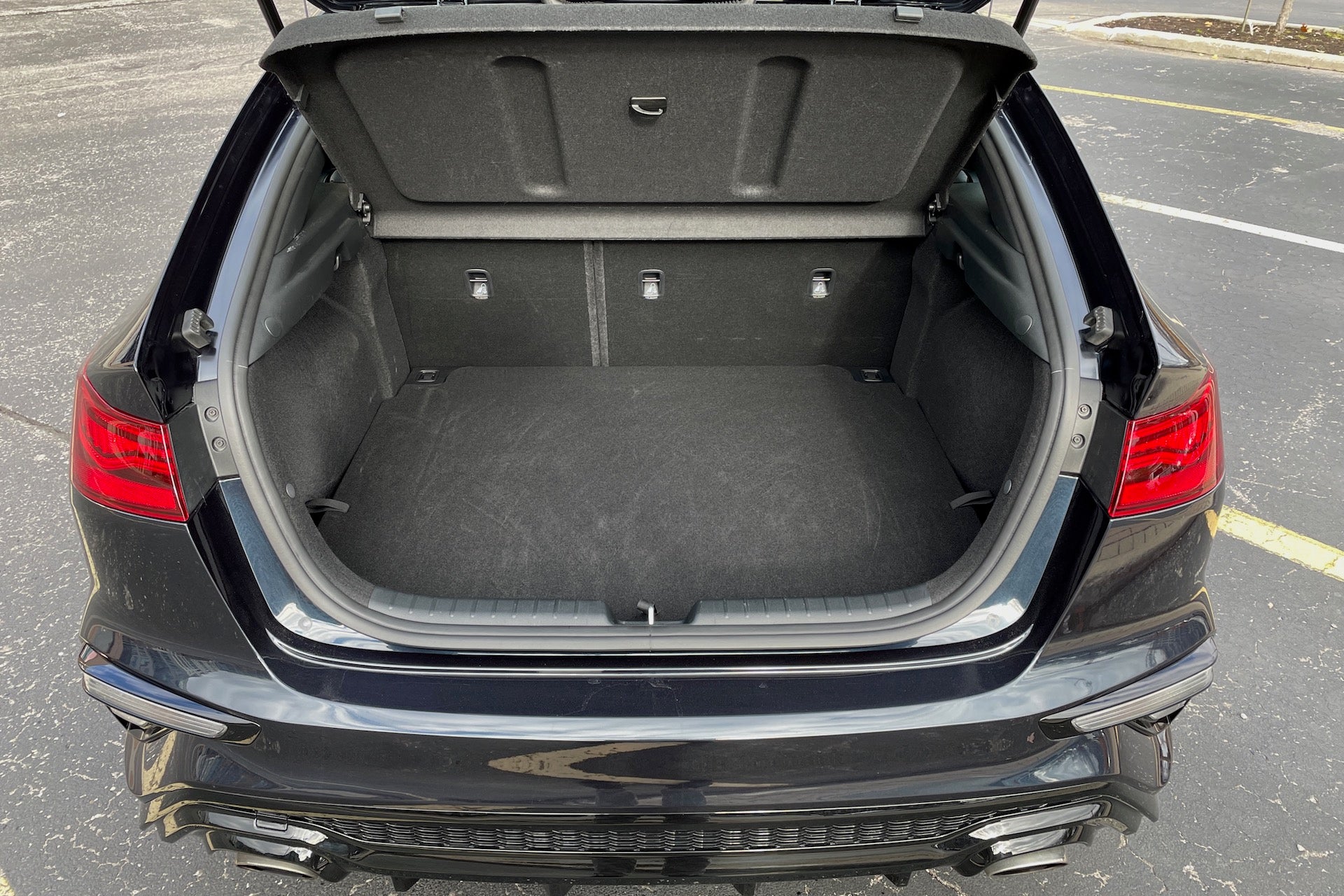 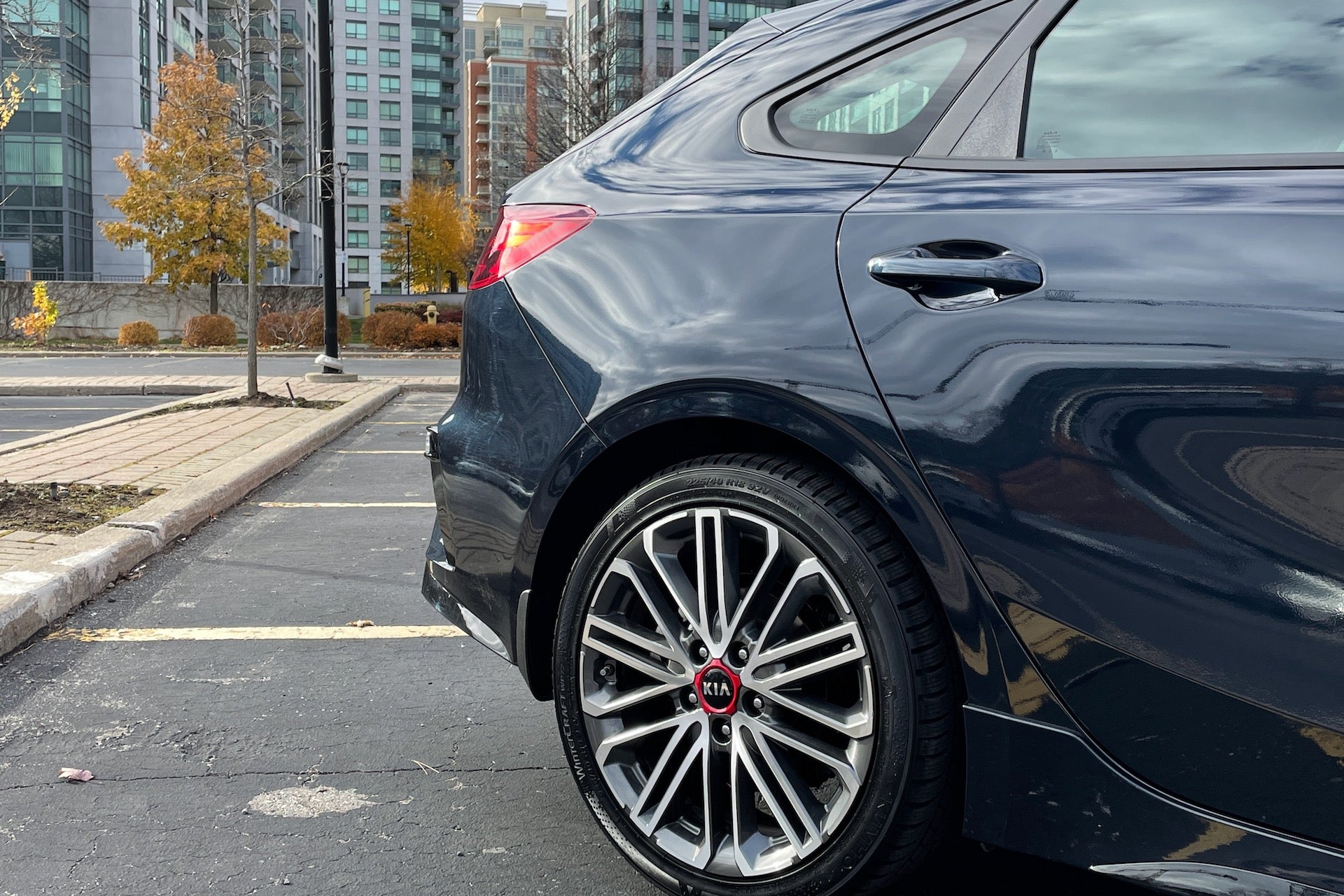 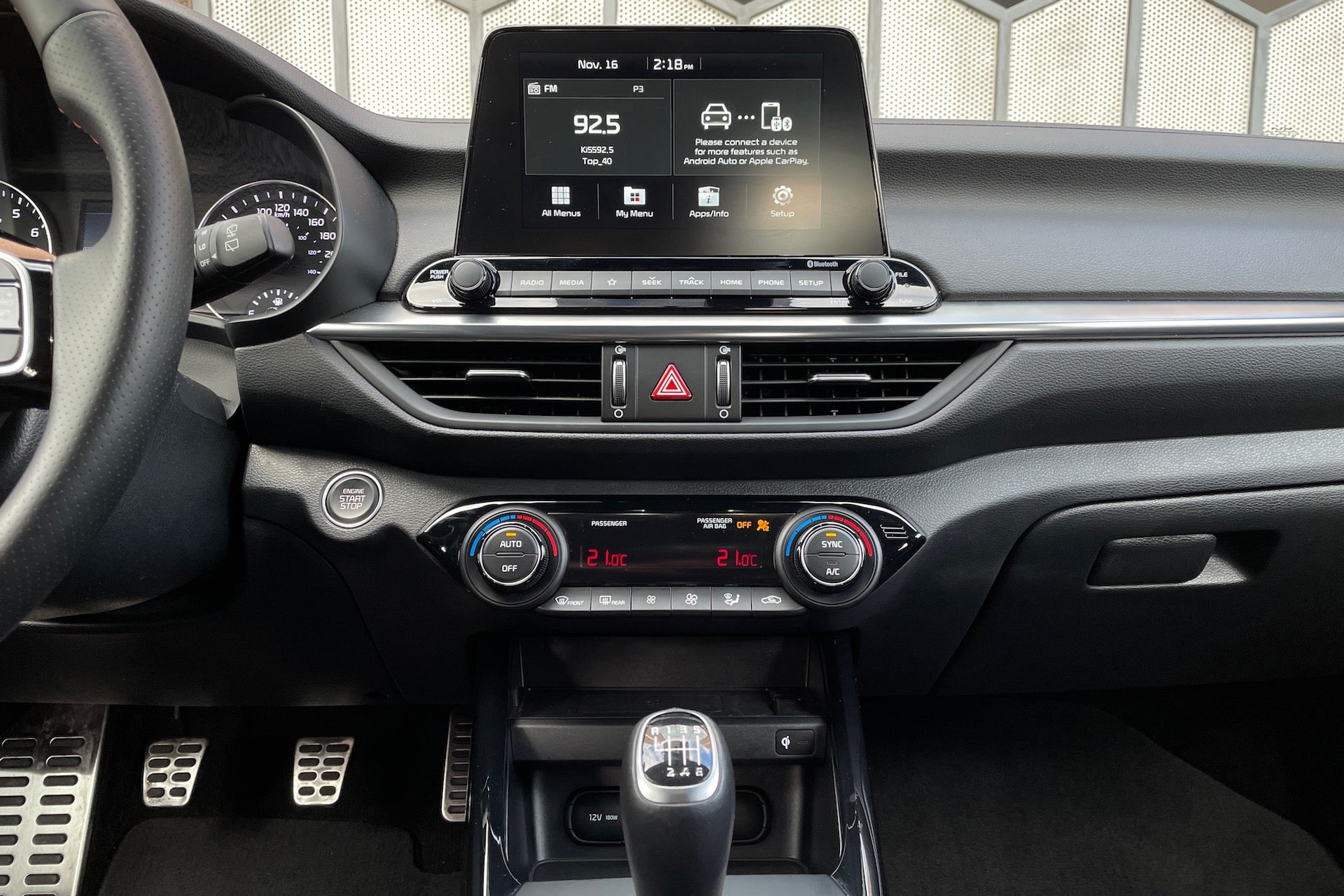 Kia has unveiled a 2022 facelift for the Forte that makes it look quite a bit sleeker but compared to most of its direct competitors, but the un-facelifted Forte, which is what the test car was, just sort of looks like a generic small car. This GT hatch model, however, gets red center caps and quite the aggressive-looking rear diffuser that give it some visual oomph.

There were a few interior features I enjoyed and want to call out. This being a Kia, it features the company’s very well-thought-out wiper setting display. The flat-bottom, leather-wrapped, and red-stitched steering wheel feels nice and suspiciously Stinger-esque in the hands. Additionally, I gotta tip my hat to any car that hangs onto a manual, rip-to-slide handbrake. Get out of here with those electronic parking brakes. And as one final transmission-adjacent observation, the car turns your music down when you put it in reverse so you can park with a clear mind, a bit like the Mercedes EQS.

Standard equipment for the Forte5 GT MT includes 18-inch wheels, a sunroof, Apple CarPlay and Android Auto integration (built-in nav and satellite radio, however, were noticeably absent), dual-zone climate control, a heated steering wheel, wireless charging, forward collision avoidance, blind-spot monitoring, and lane-keep. The only “optional extra” found on the tester was the Gravity Blue paint that incurs a $250 color charge that you’ll pay for any Forte5 that isn’t black.

Under the hood sits Kia’s turbocharged 1.6-liter four-cylinder, making a Civic Si-beating 201 horsepower and 195 pound-feet of torque and sending it to the front wheels. As a result, the Forte 5 GT boasts a decent amount of get-up-and-go on paper. 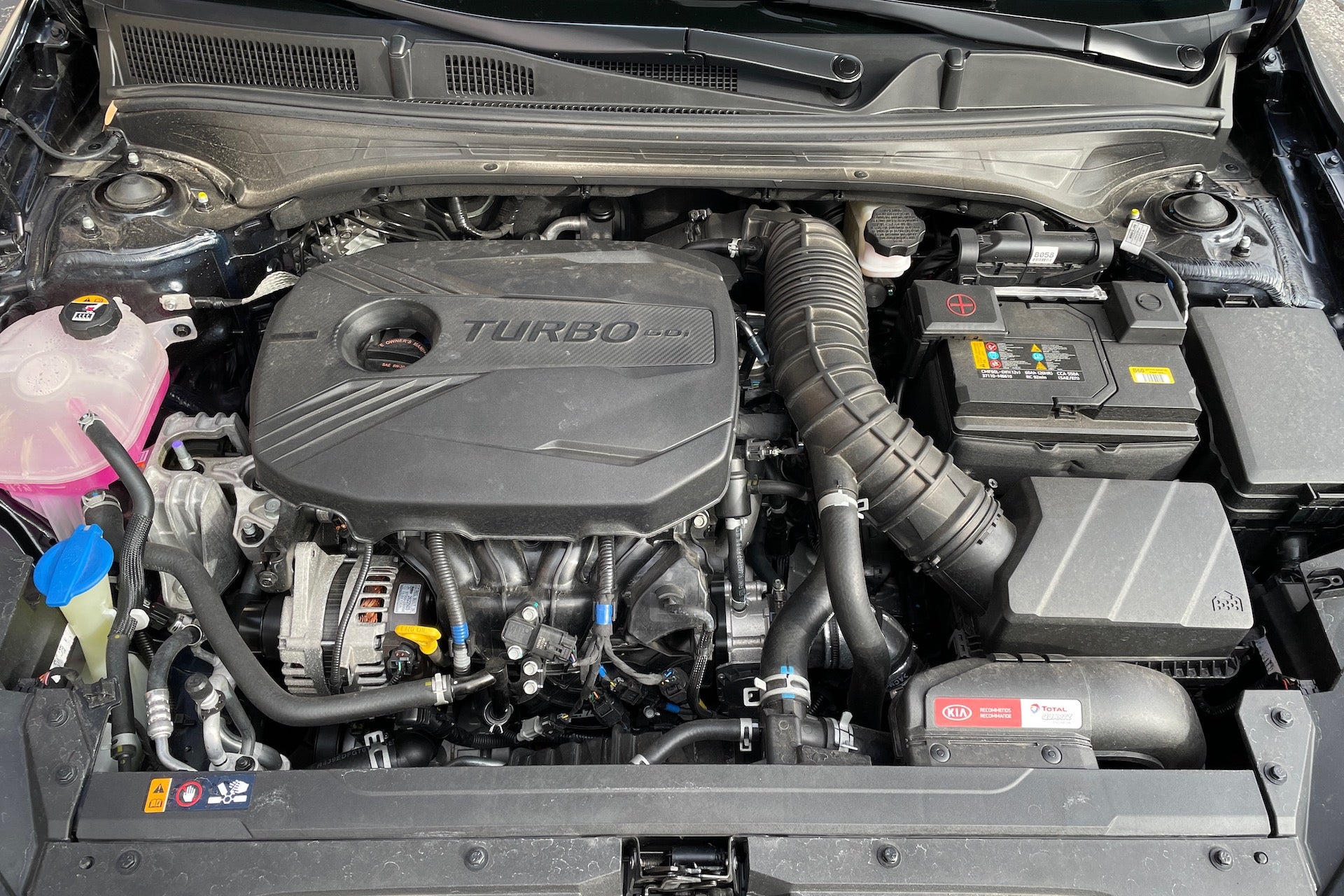 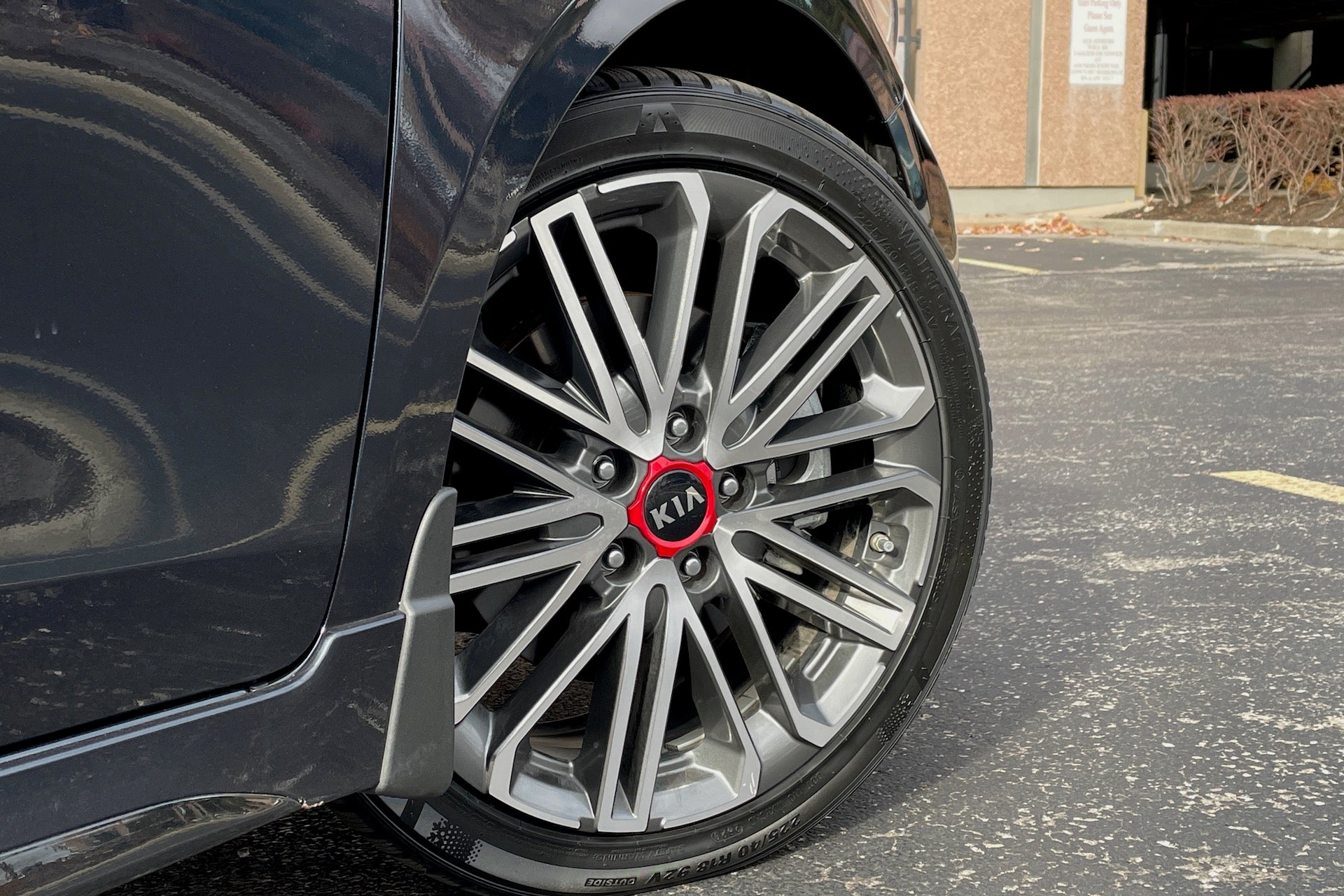 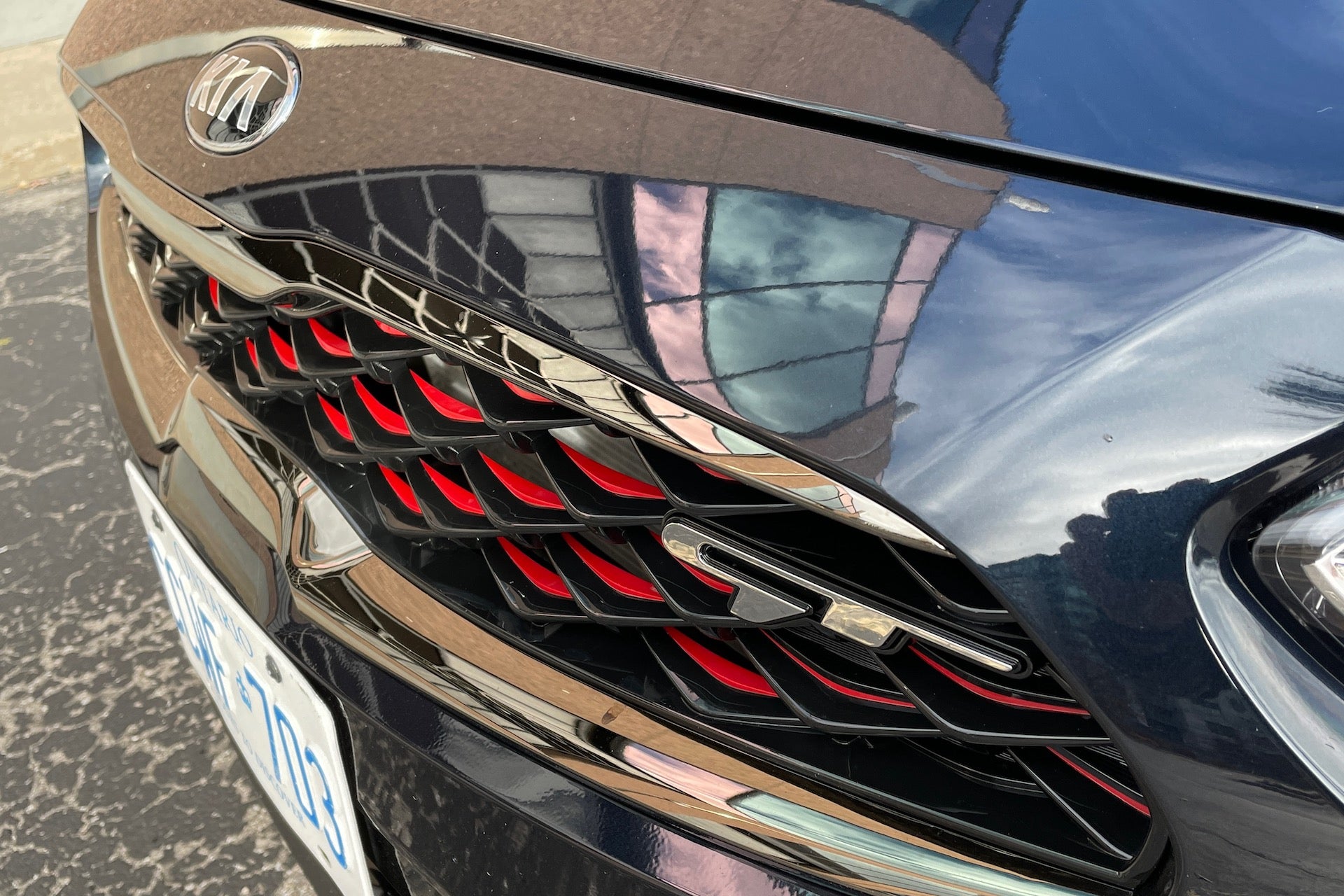 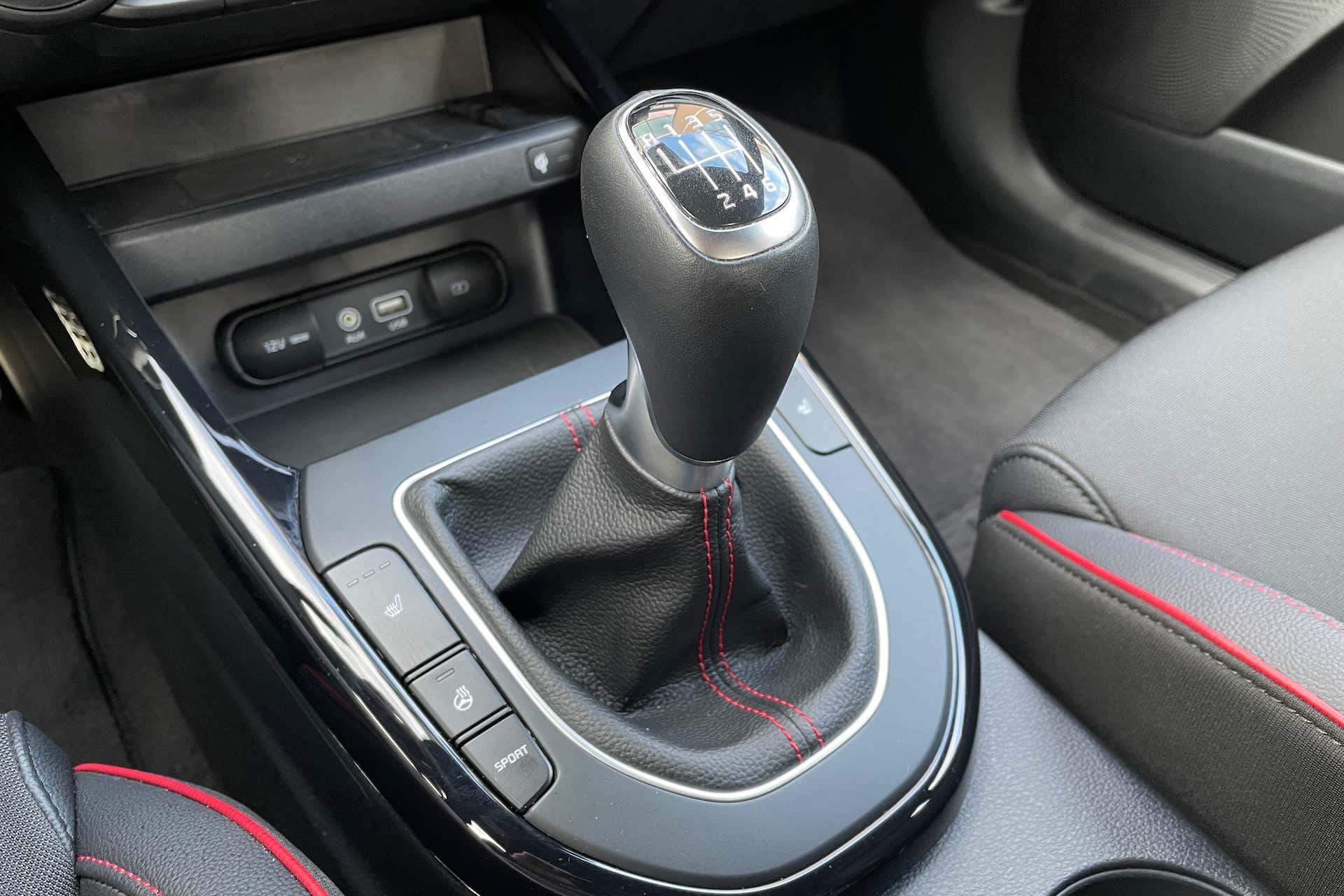 Unfortunately, however, the manual Forte5 wasn’t quite the sleeper hot hatch I hoped it would be. That row-your-own six-speed shifter, for starters, just doesn’t feel very good. The shift action is reasonably short but it also feels flimsy, cheap, and plasticky. Light but not in a good way, like the entire lever could easily snap off in my hand if I slammed it into fourth hard enough.

The clutch is fine, though, and has a very forgiving engagement curve—perfect for those learning to drive manual. (Although, I’m not sure this car’s meh shift feel will make ’em want to keep learning.) The transmission is also oddly geared. You’d think a manual economy car like this would have a tall top gear for more efficient and quieter highway cruising, but in sixth going just 60 mph, the Forte5 hummed along at a too-high 2,600 rpm. By the time I was done with it, the car’s trip computer indicated a not-stellar 28 mpg.

The steering is fine but, unlike in the Sentra, the chassis just didn’t feel like it enjoys spirited driving very much. Weighing approximately 3,000 pounds, the Forte5 isn’t necessarily bad at changing directions but doing so quickly just doesn’t feel especially amusing, especially compared to the more hunkered-down and nimble feeling Mazda3 and new Civic hatch. It may surpass the Civic Si on hp and torque but it, I suspect, is far from being in the same league when it comes to driving fun, considering the Kia can’t even match the manual version of Honda’s new Civic Hatch in terms of enjoyableness. 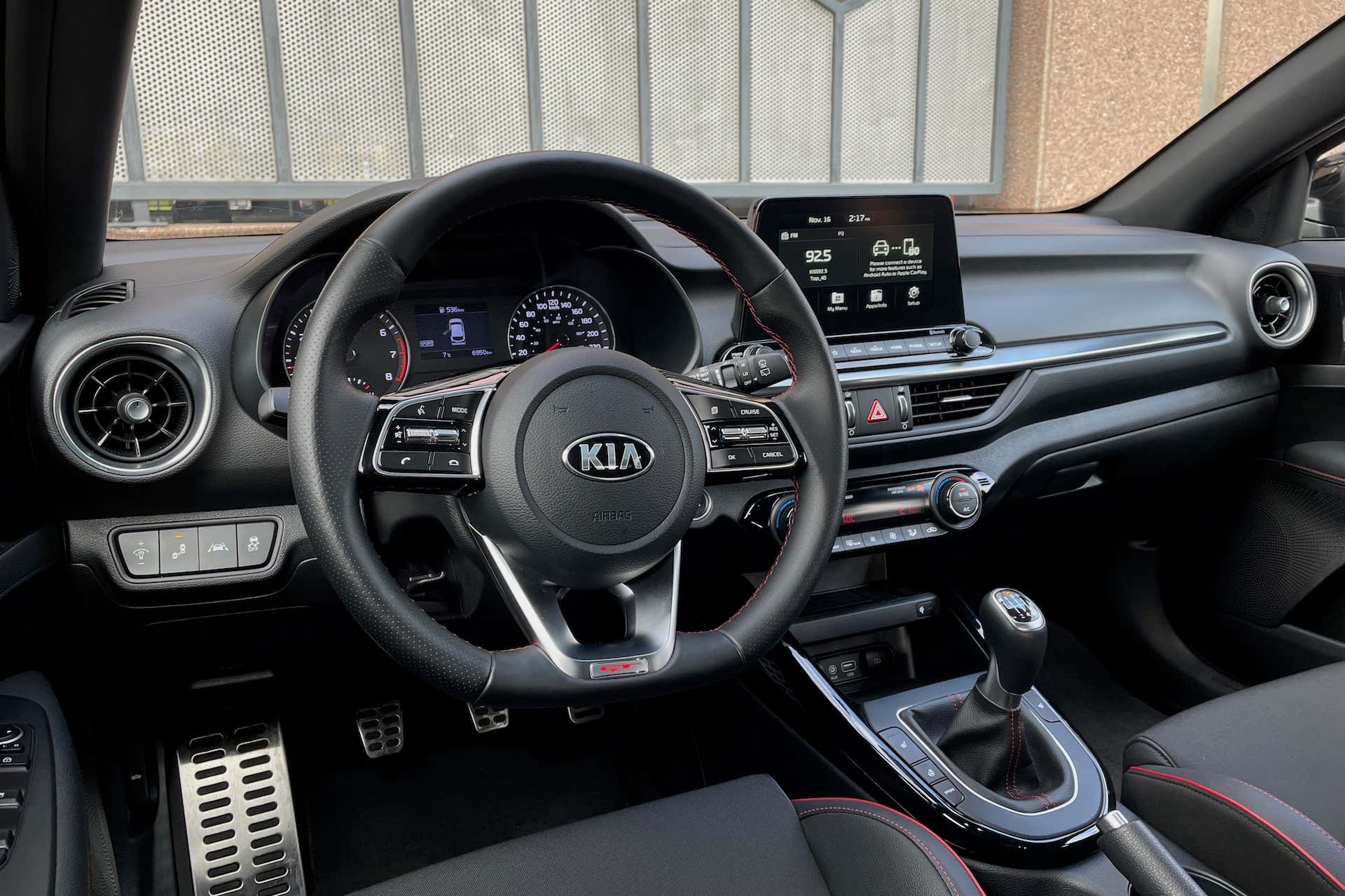 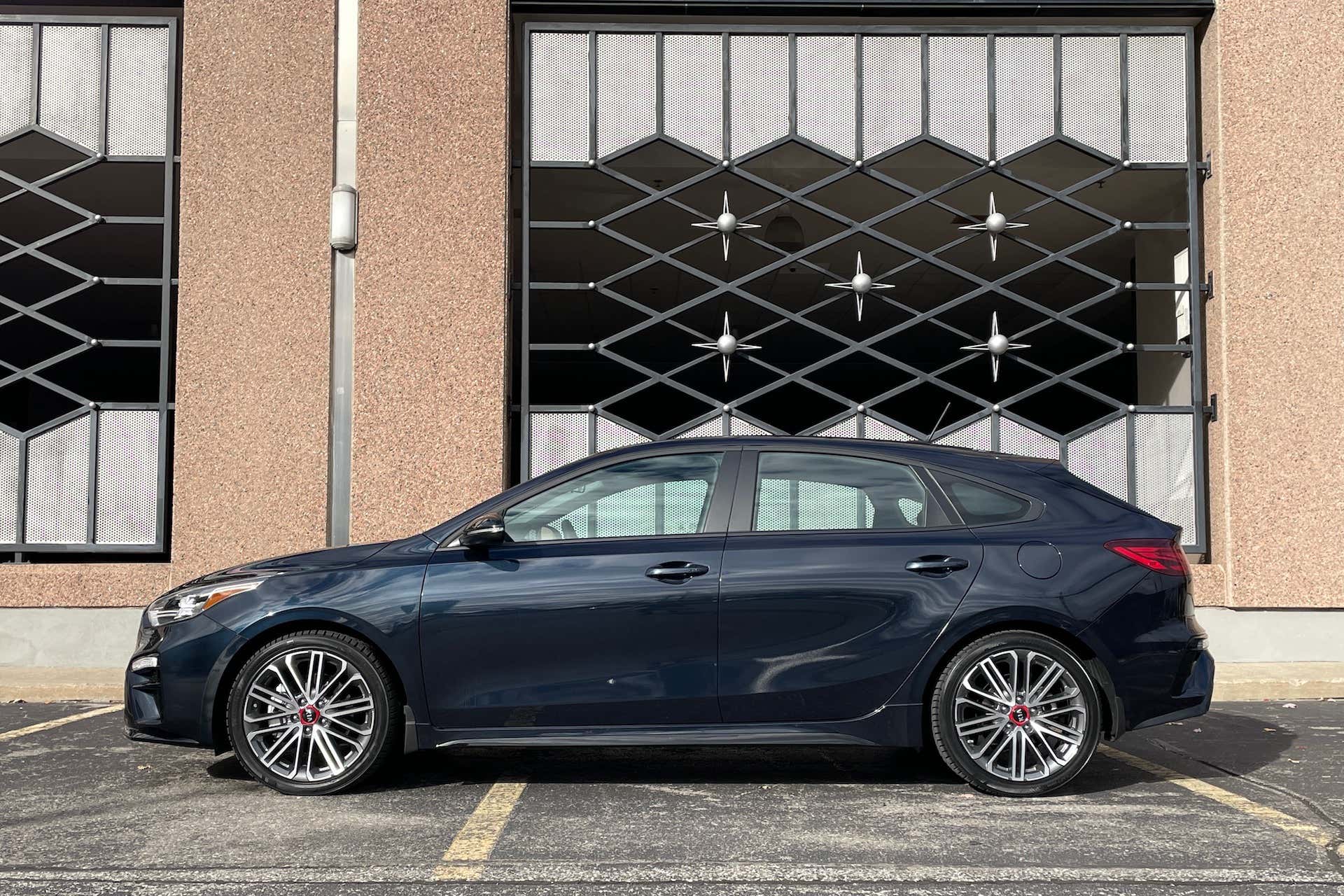 I had high hopes for the 2021 Kia Forte5 GT. But instead of the secret, affordable enthusiast hot-hatch that I wanted it to be, it’s mostly just an average compact car that happens to have a manual. In a darker timeline, perhaps the mere existence of this car with this transmission is worth celebrating but, given how many of its similarly priced competitors such as the aforementioned Mazda and Honda—not to mention the Toyota Corolla, Canadian-market Nissan Sentra, base Hyundai Elantra, Subaru Impreza, and VW Jetta—still offer a manual, I’m not sure it is. By my count, in fact, every single car in the Forte’s class is available with a manual up here in Canada.

In a weird way then, I guess the manual Kia Forte5 exists as a true economy car throwback. In those days, you bought a hatchback like this with a manual—not because you thought it would be fun, but because that’s the transmission you could afford. True, the $27,679 CAD manual Forte5 costs less than the $29,000-plus CAD CVT-equipped Forte5. But today, with automakers like Honda and Mazda selling manual hatchbacks to satisfy the driving enthusiasts, the manual transmission in the Forte5 merely makes do rather than offer something sporty, engaging, and fun.

I’m sure it’s the car for someone somewhere out there. But that person ain’t me. 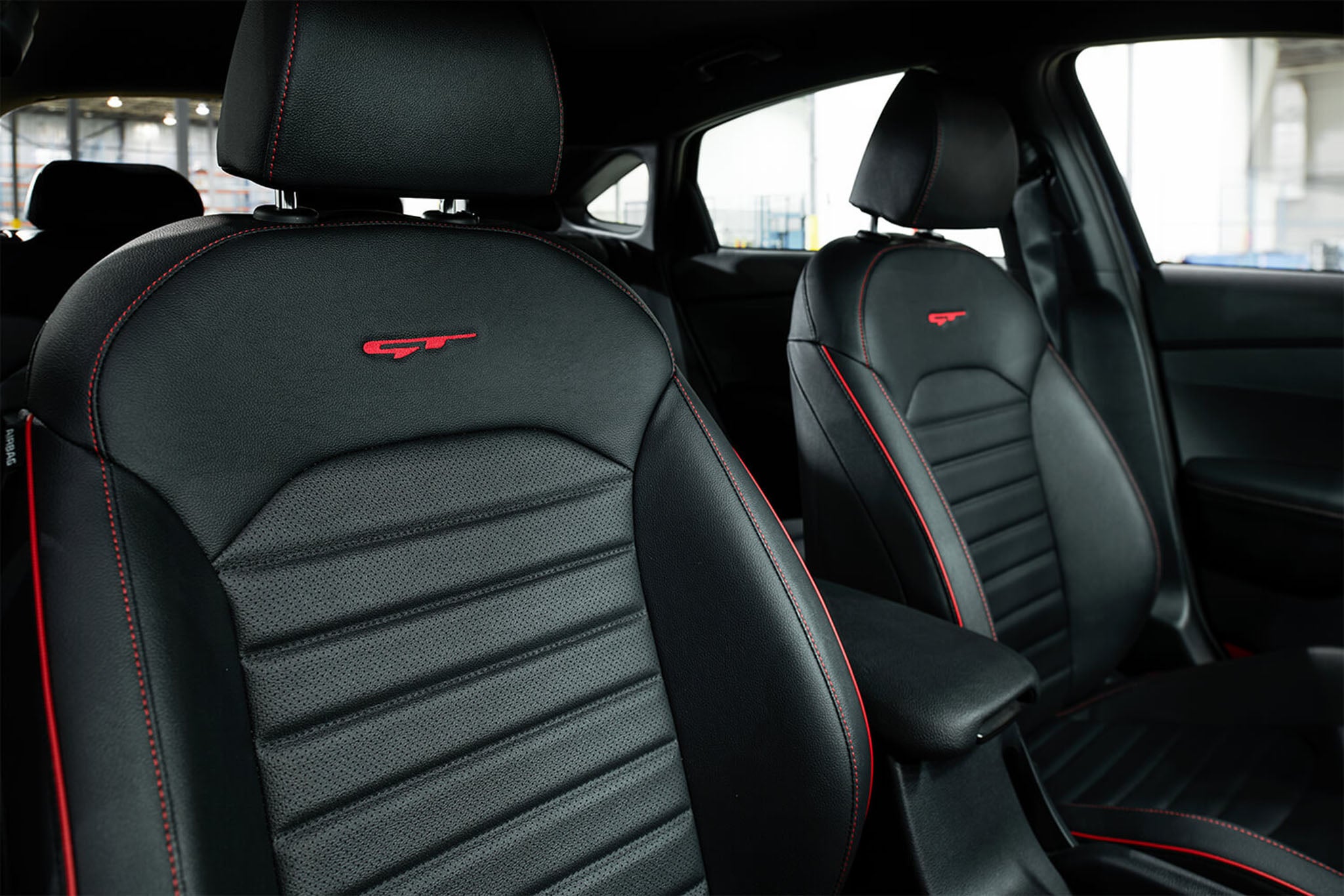 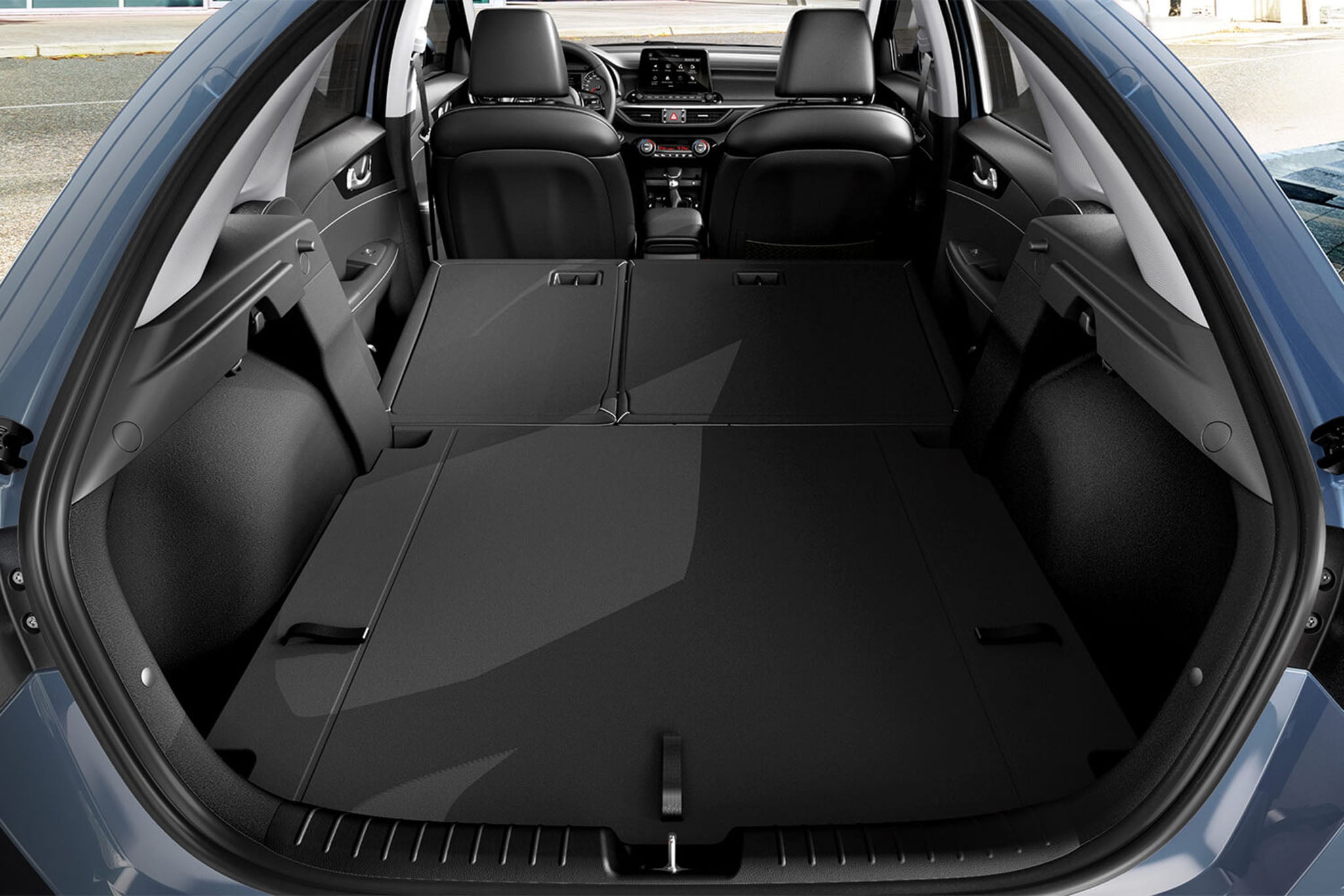 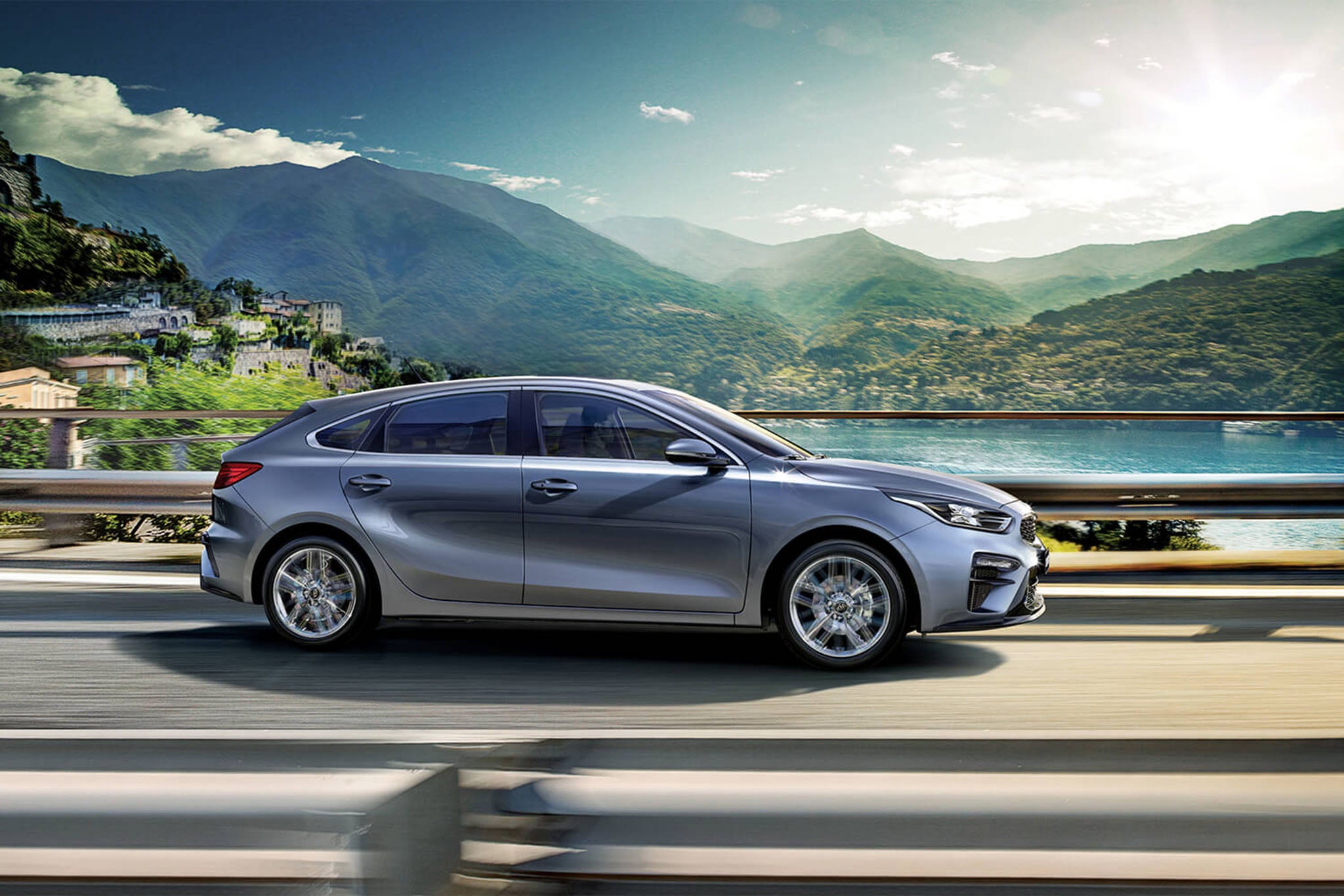 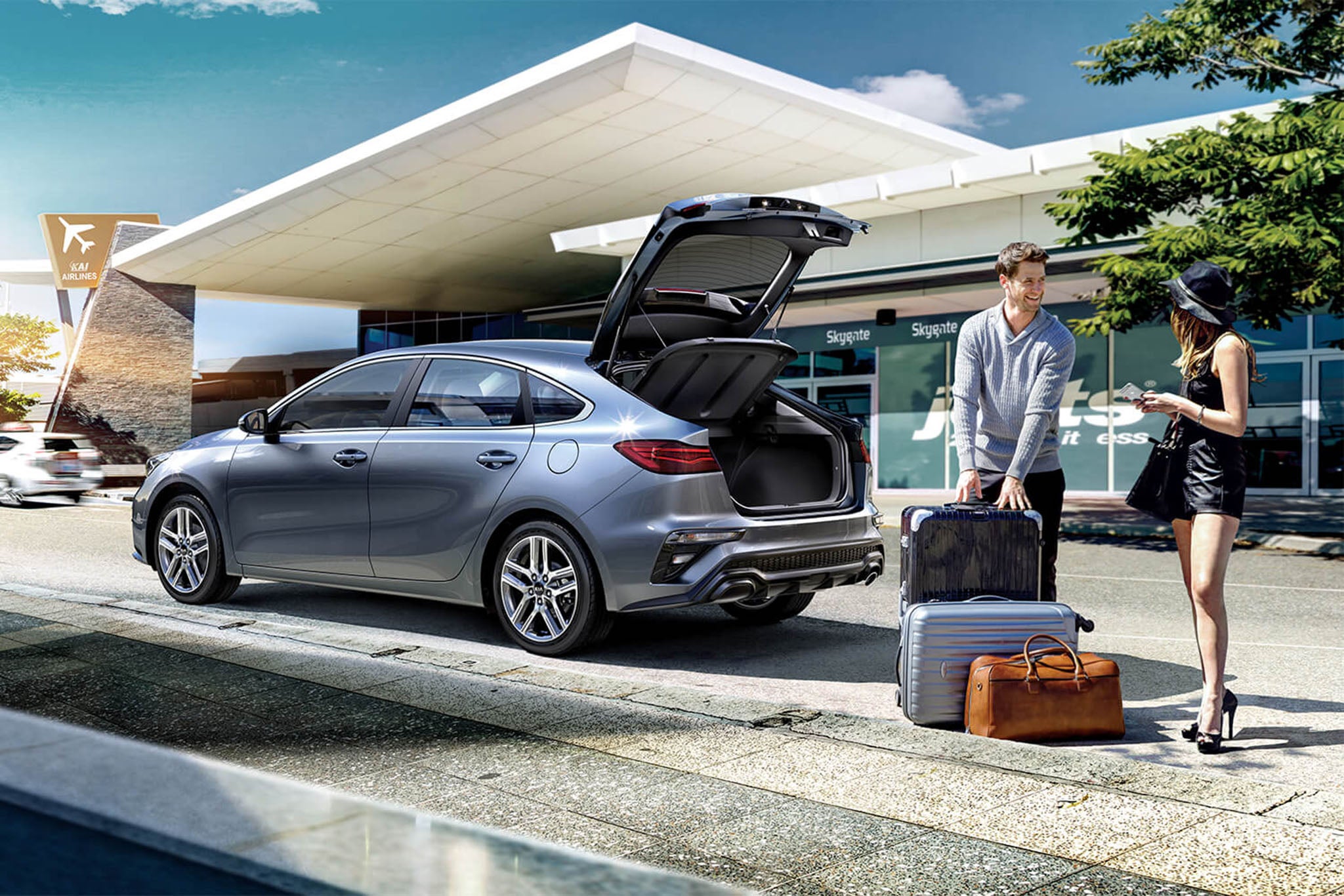 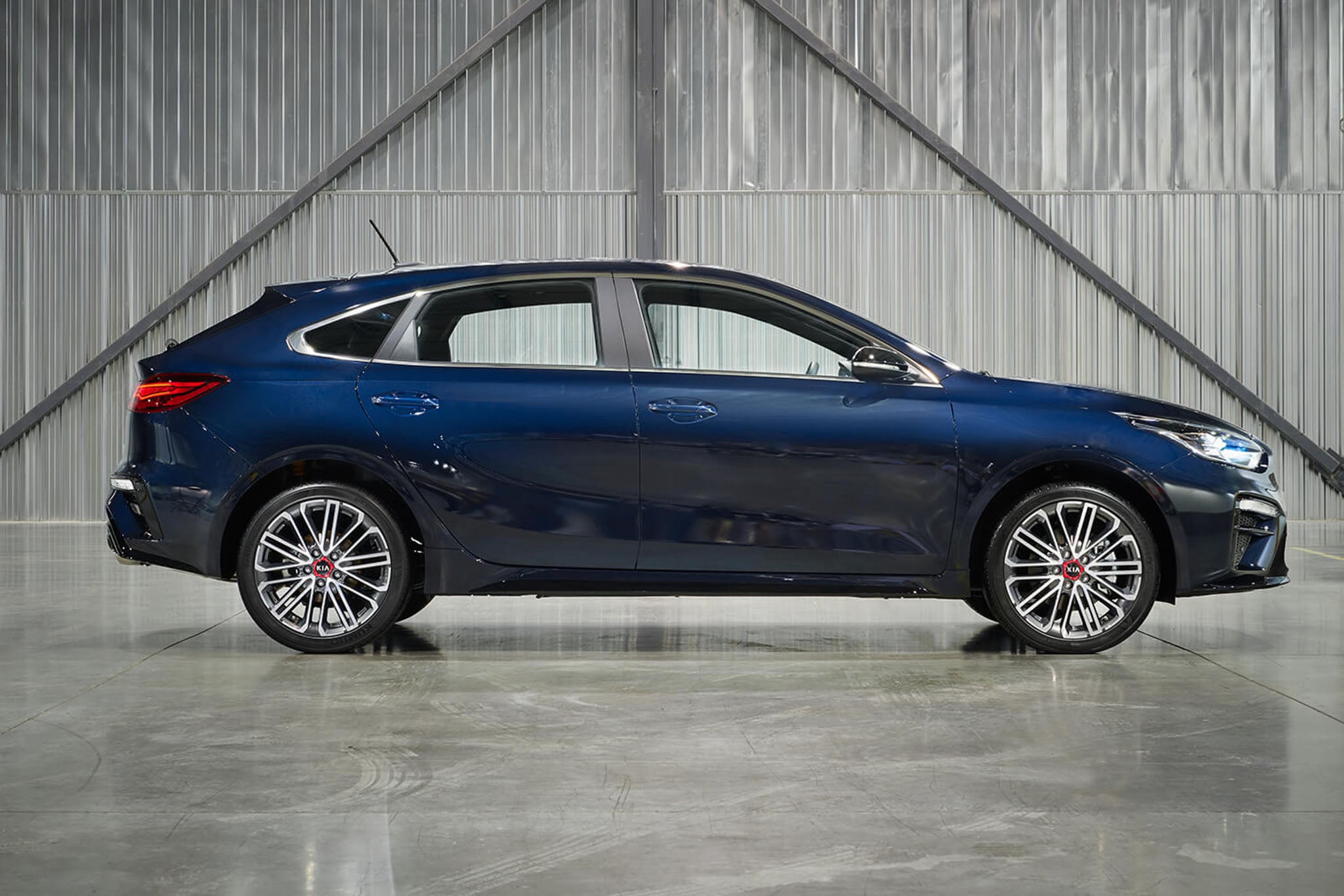 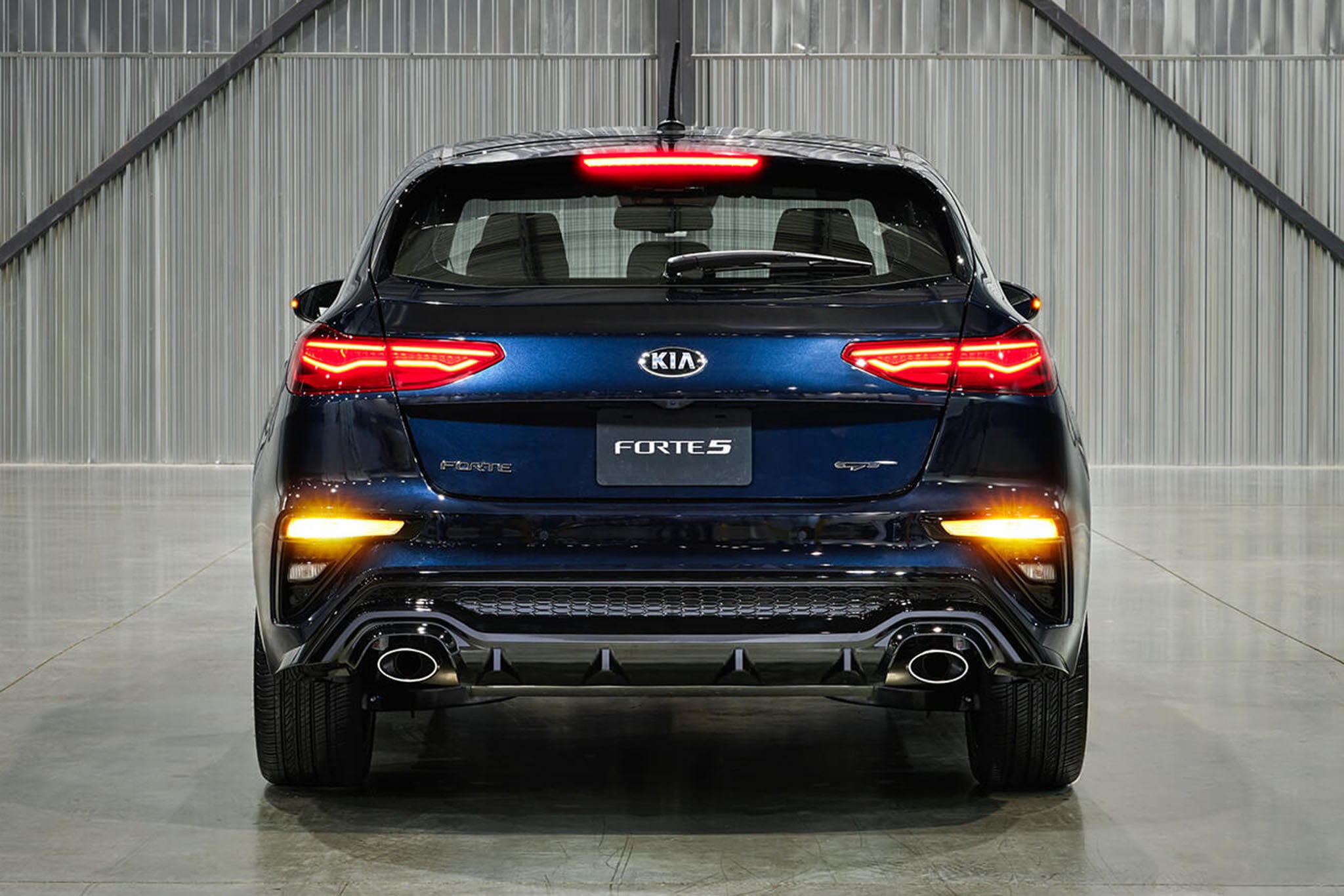 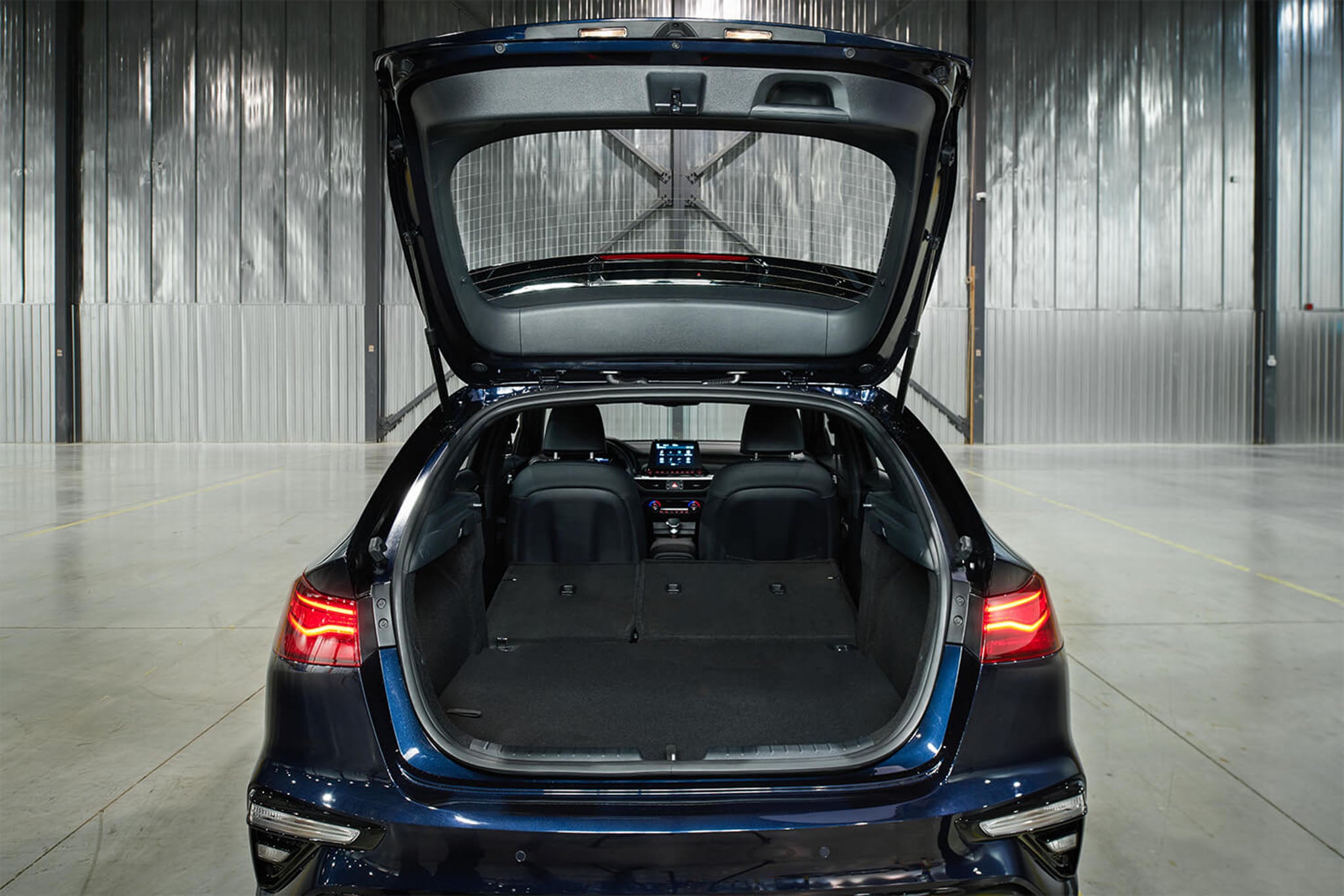 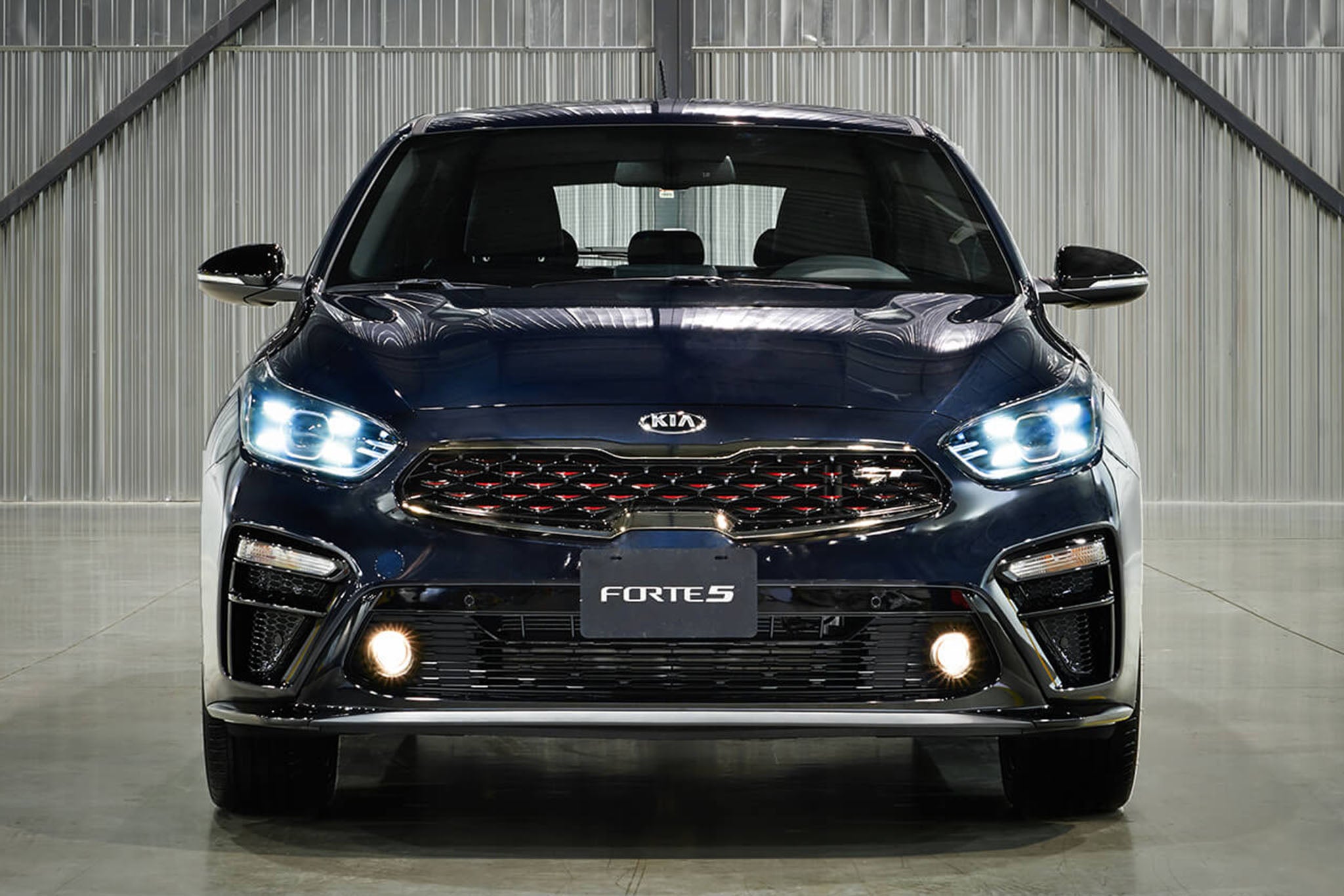 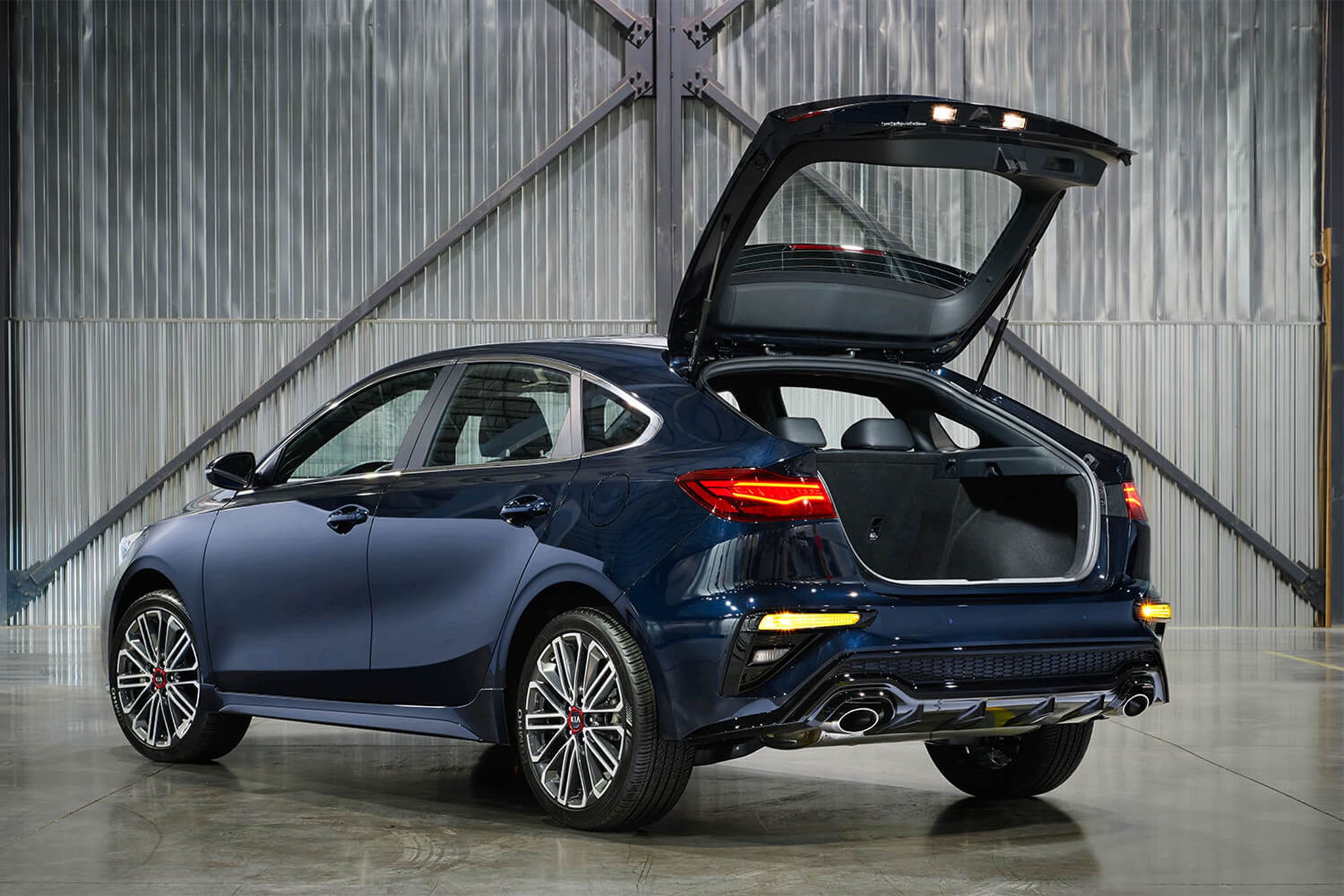 Got a tip or question for the author about the Forte5? You can reach them here: [email protected]