There are two things seemingly every car company is doing in terms of electrification: making SUVs and making them pricey. In announcing the 2022 Bolt EV and EUV, Chevrolet is making a cosmetic attempt at doing one of those while managing the opposite of the other. The new Bolt EV will cost a solid $5,000 less than its 2021 predecessor, despite tech upgrades to the interior and an extended range, and even its larger sibling the EUV will beat last year’s model by a few thousand dollars.

It’s deliberate; Chevrolet consciously set out to make the Bolt an affordable EV and it plans to keep whittling away at the price. At the new cars’ launch, Chevy said that production efficiencies and the experience of developing the Bolt since 2016 helped it find the savings to almost get below the price of a bog-standard Nissan Leaf. That’s all while wringing out another 30 or so miles of range compared to the top-trim Leaf, according to GM’s figures. 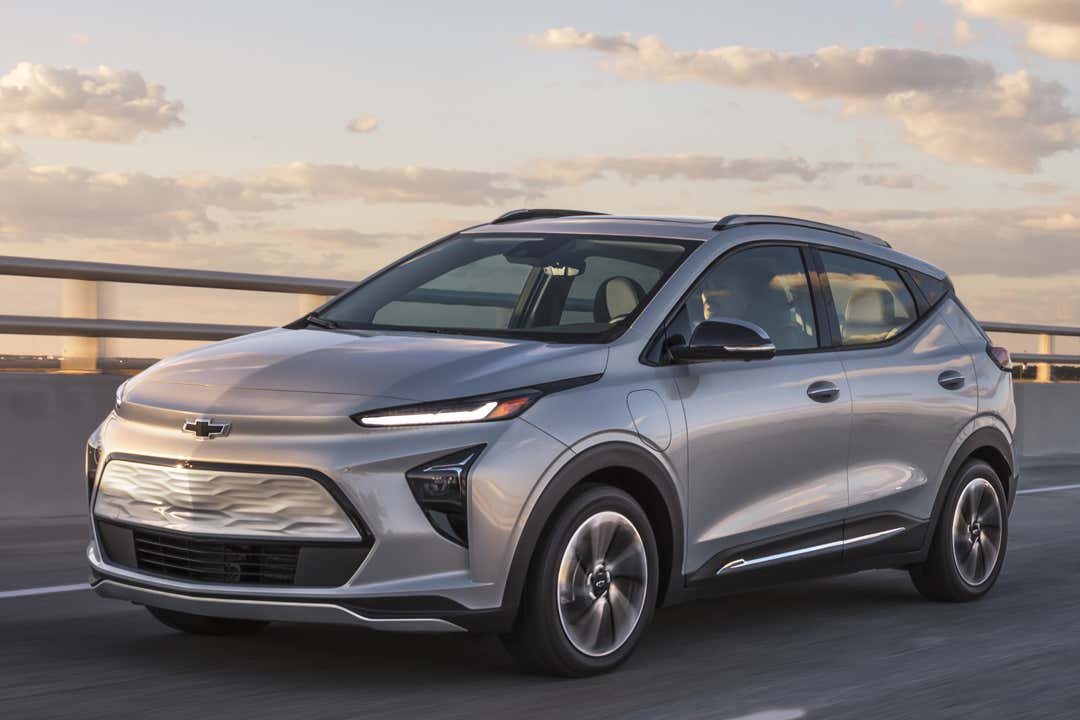 In terms of what the 2022 Bolts deliver, they’re clearly not aiming to be the next Porsche Taycan rival. Chevrolet has always marketed the Bolt as a long-range, budget electric vehicle, but calling its own estimate of 259 miles for the EV and 250 for the EUV “long-range” in 2021 feels a bit unambitious.

The Bolt’s ambitions aren’t in beating Tesla on specs, though—they’re about selling lots and lots of electric cars. The Bolt is for rivaling the Leaf and if you’re going to take on the world’s best-selling electric car, you better be planning to move a lot of units. Chevrolet is keen, however, to emphasize it’s a case of producing something mass-market and affordable, not per se cheap or compromised.

Both 2022 models use the same drivetrain and battery, a single motor unit equipped with the permanently excited magnets Audi was trying to sell us on the tech credentials of last week. That outputs a pretty average 200 horsepower or 150 kilowatts, the same as Formula E’s decidedly clunky first season. But the Bolt’s not a race car, so the fact it’s probably not the pick for a highly charged track day isn’t the point. It’s still got all the fun of electric torque and you can’t get away from the fact the 2022 Bolt EV will cost just $31,995. In terms of what’s been updated on the 2022 cars, a lot of it’s look and feel. The EV and EUV models share the same basic architecture, which is also essentially common with the last-generation Bolt. The EUV—that’s Electric Utility Vehicle, yes—is pretty much only aesthetically different from the regular Bolt EV while being a little roomier on the inside.

The standard Bolt EV has a 102.4-inch wheelbase and the EUV extends that by just under three inches, so the differences aren’t massive even where they exist. What’s really distinct about them is the bodywork, with the cars sharing no exterior sheet metal parts so while it’s pretty questionable whether the EUV is really a utility vehicle rather than an extra legroom edition, it does at least look different.

In SUV terms, the EUV pretty much isn’t. It isn’t all-wheel-drive and it has exactly the same towing capacity as the EV, which is the same as the 2021 Bolt. It’s got the same 65-kilowatt-hour battery pack as the EV and in terms of why it’s got a slightly reduced range, it’s only because the EUV is 90 pounds heavier than the EV rather than having any extra power demands. It’d be fairly reasonable to compare the difference between the two to upgrading your airline seat. Given it only costs $2,000 more than the EV, the EUV is roomier, has more trunk space and has a generally more luxurious feel inside, including upgrades to infotainment. That’s generally had an overhaul from the 2021 car, although car management updates will still need to be done at dealerships; infotainment will be over-the-air. A new 10.2-inch screen adorns the dash in both cars and they share a steering wheel, including a regen-on-demand pedal and toggle gears. There’s also a launch-exclusive premium version of the EUV for a cool $10,000 more than the base model that will come with some of Chevrolet’s more luxurious features like Super Cruise, the lauded advanced driver assistance system (ADAS).

The 2022 Chevy Bolt EV will start at $31,995 including destination while the EUV sees a slight hike at $33,995. Keep in mind, though, that’s before any state, local or utility incentives. Chevrolet says it’ll start production later this spring, with sales ready by the summer.