After unveiling the much-anticipated Santa Cruz pickup a couple of weeks ago, Hyundai’s mad march to diversify its portfolio continues with the 2022 Hyundai Kona N, the brand’s first performance crossover.

Here are the headline facts. The “racetrack capable” Kona N is powered by a 2.0-liter turbo-four producing 276 horsepower and 289 pound-feet of torque. That’s hooked up to an eight-speed wet DCT built in-house featuring three different selectable N shift modes: N Grin Shift (NGS), N Power Shift (NPS) and N Track SenseShift (NTS), set up for fun driving, max acceleration prowess, and track driving respectively. Hyundai made no mention of a manual option. Zero to 62 mph is accomplished in 5.5 seconds with Launch Control, which comes standard, and top speed comes in at 149 mph. It’s essentially a Veloster N for folks who’d like to sit higher and would rather not have to explain that car’s weird third door every time someone comes along for the ride. 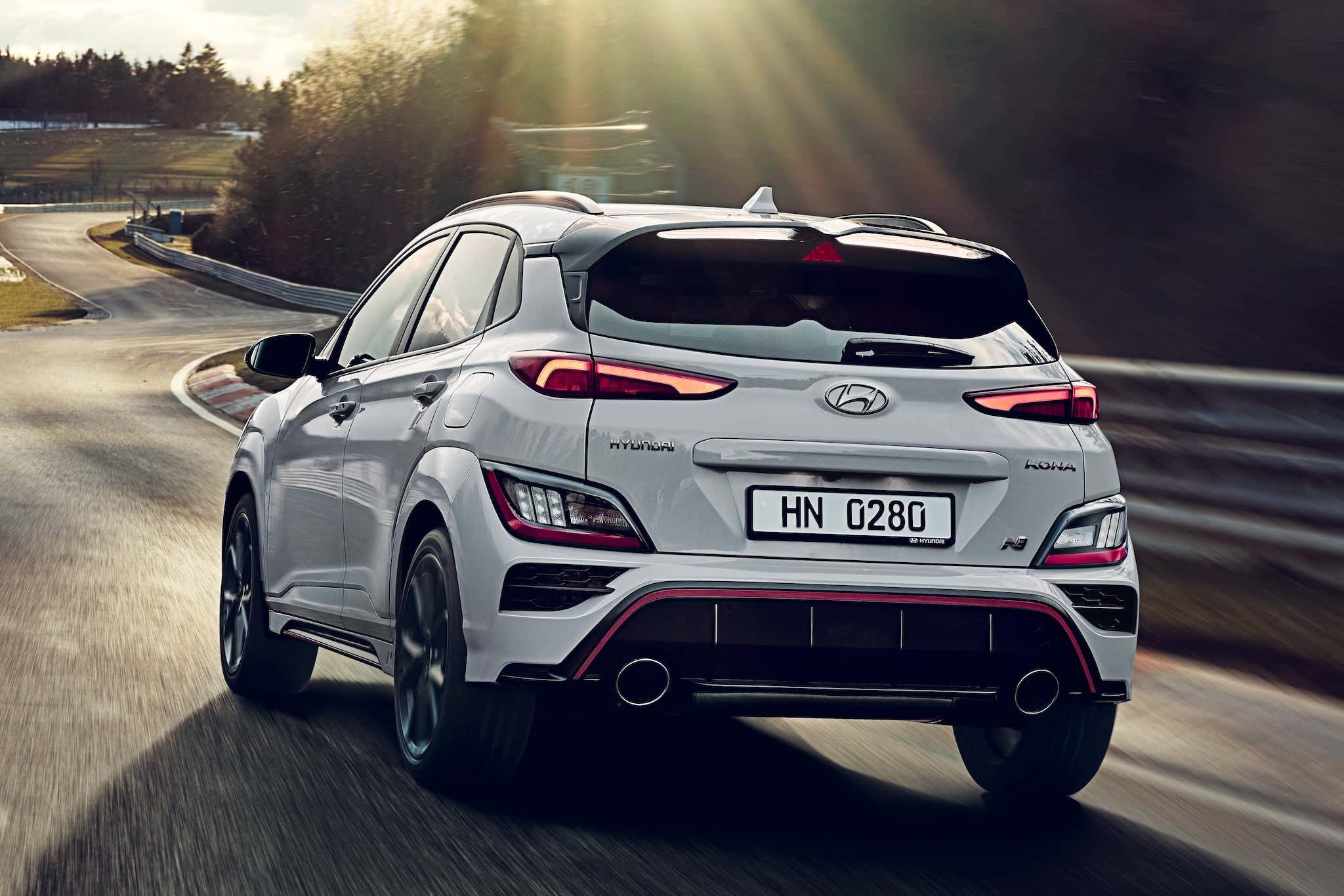 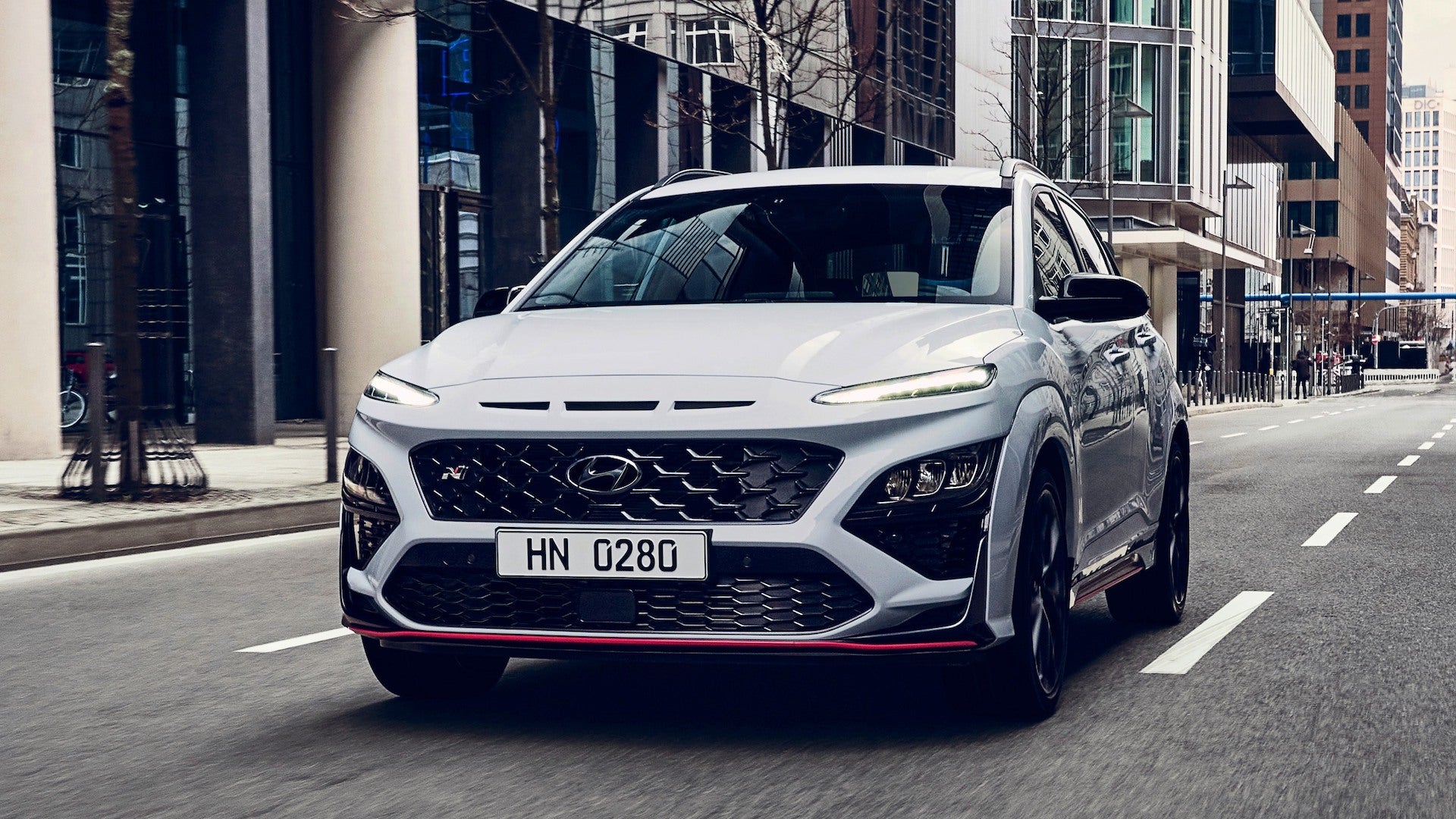 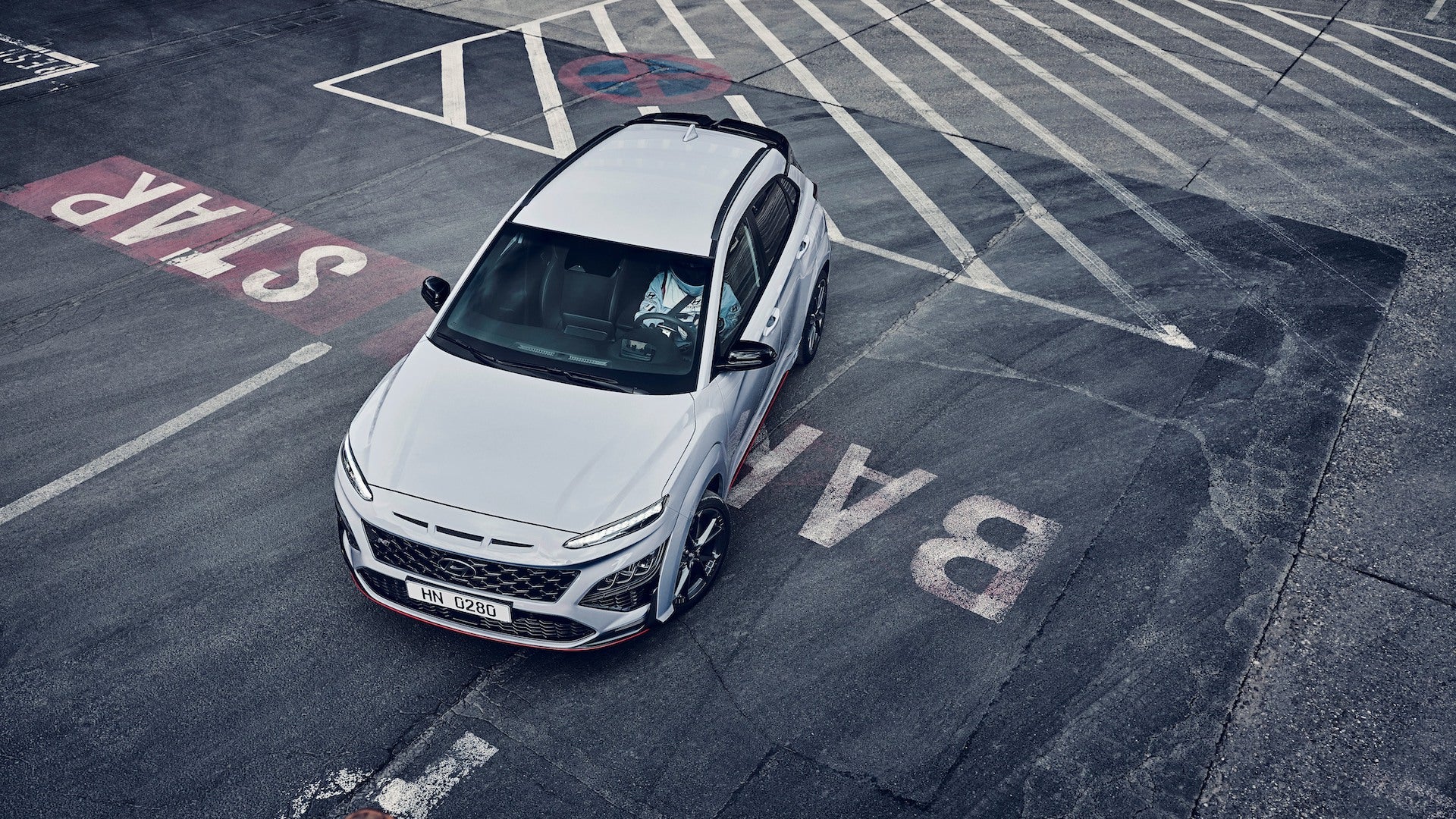 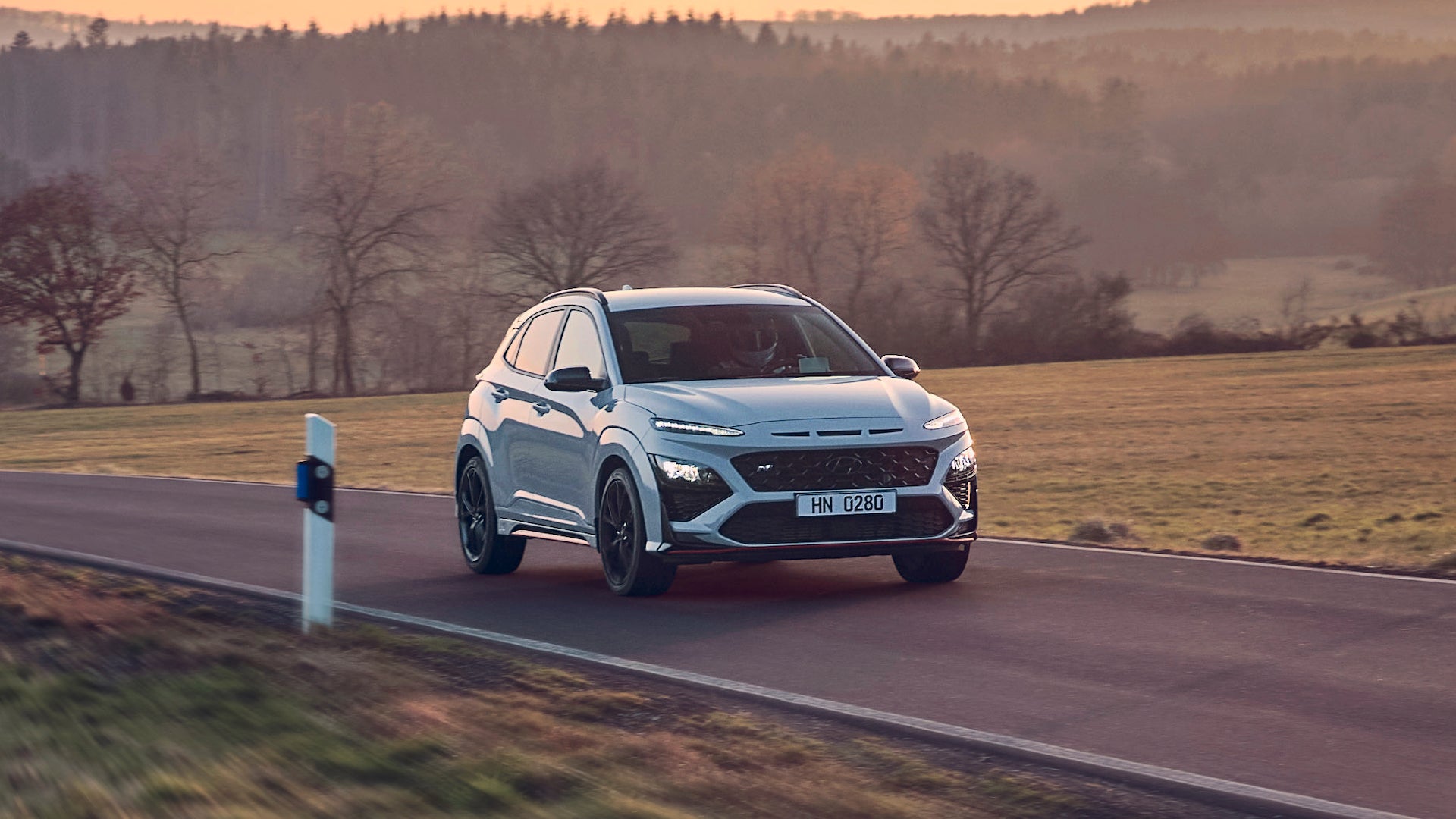 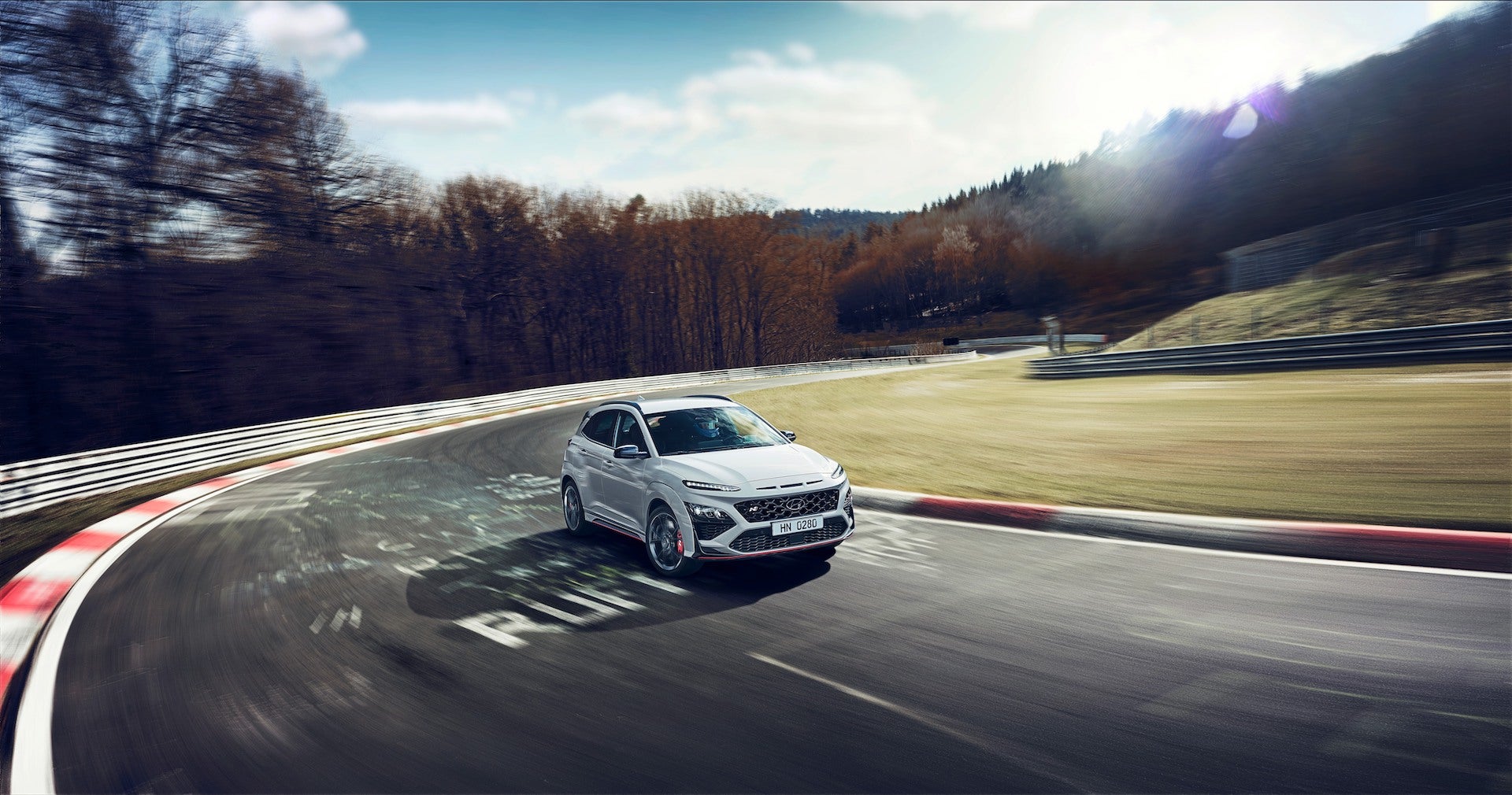 An electronic limited-slip differential keeps things where they should be while the Kona N meets the road via a set of 19-inch forged lightweight wheels with a wider track, upgraded tires, and brakes to match. Extra welding points in the body, an enhanced strut ring structure, and a reinforced, more rigid chassis combat body roll while five different drive modes (Eco, Normal, Sport, N, and Custom) alter the engine, ESC, exhaust noise, and steering. It all adds up to a curb weight of just over 3,300 pounds. 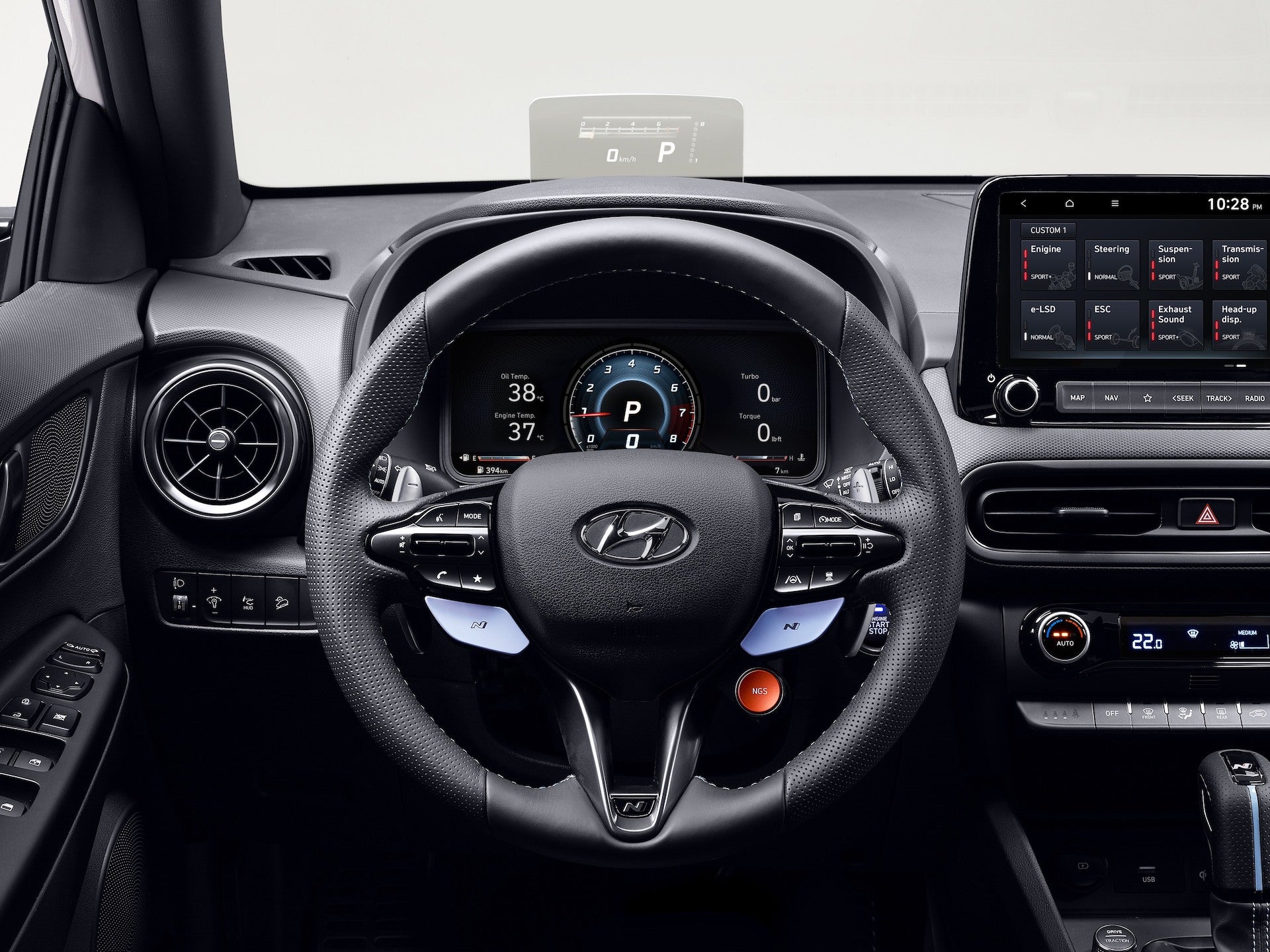 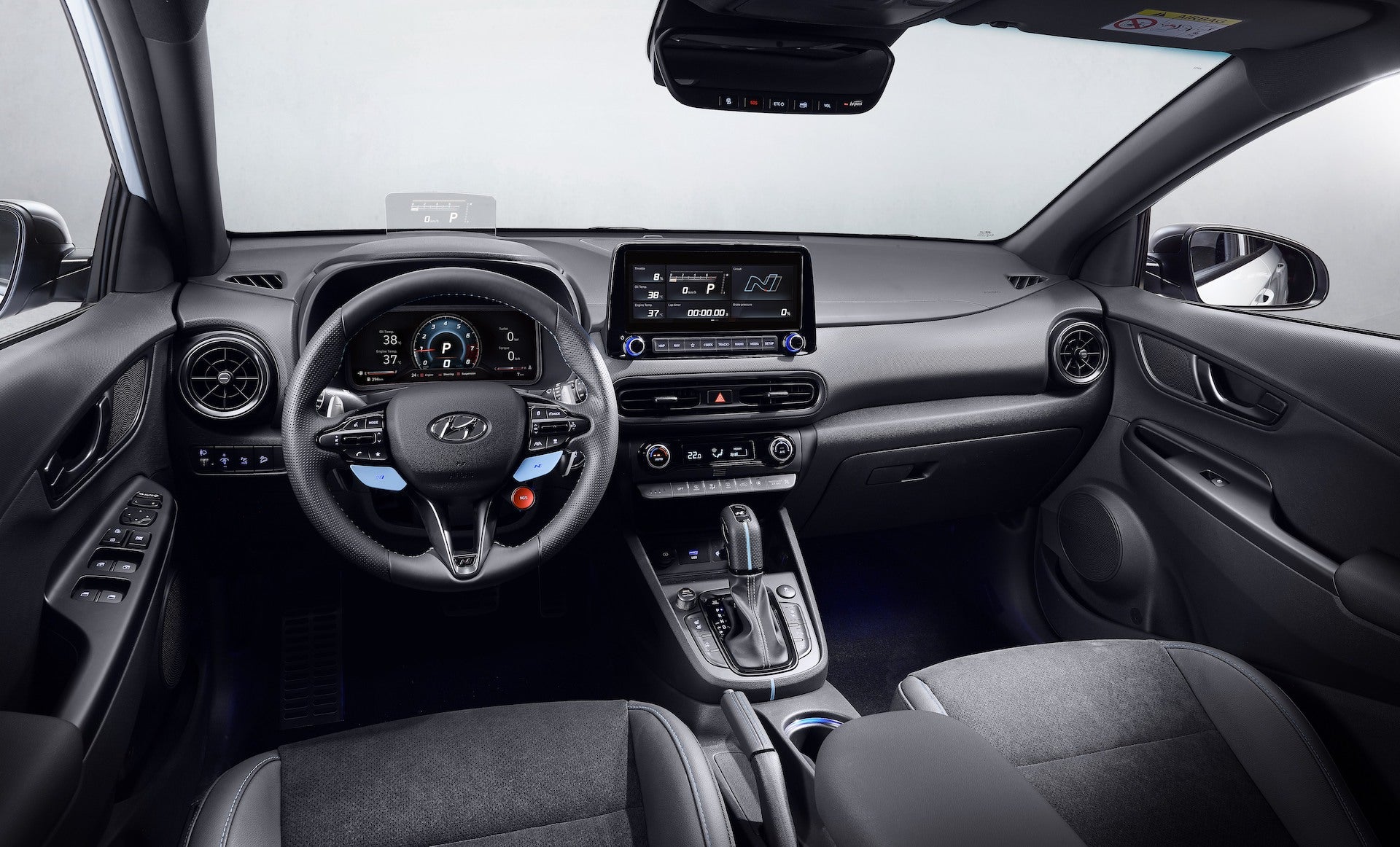 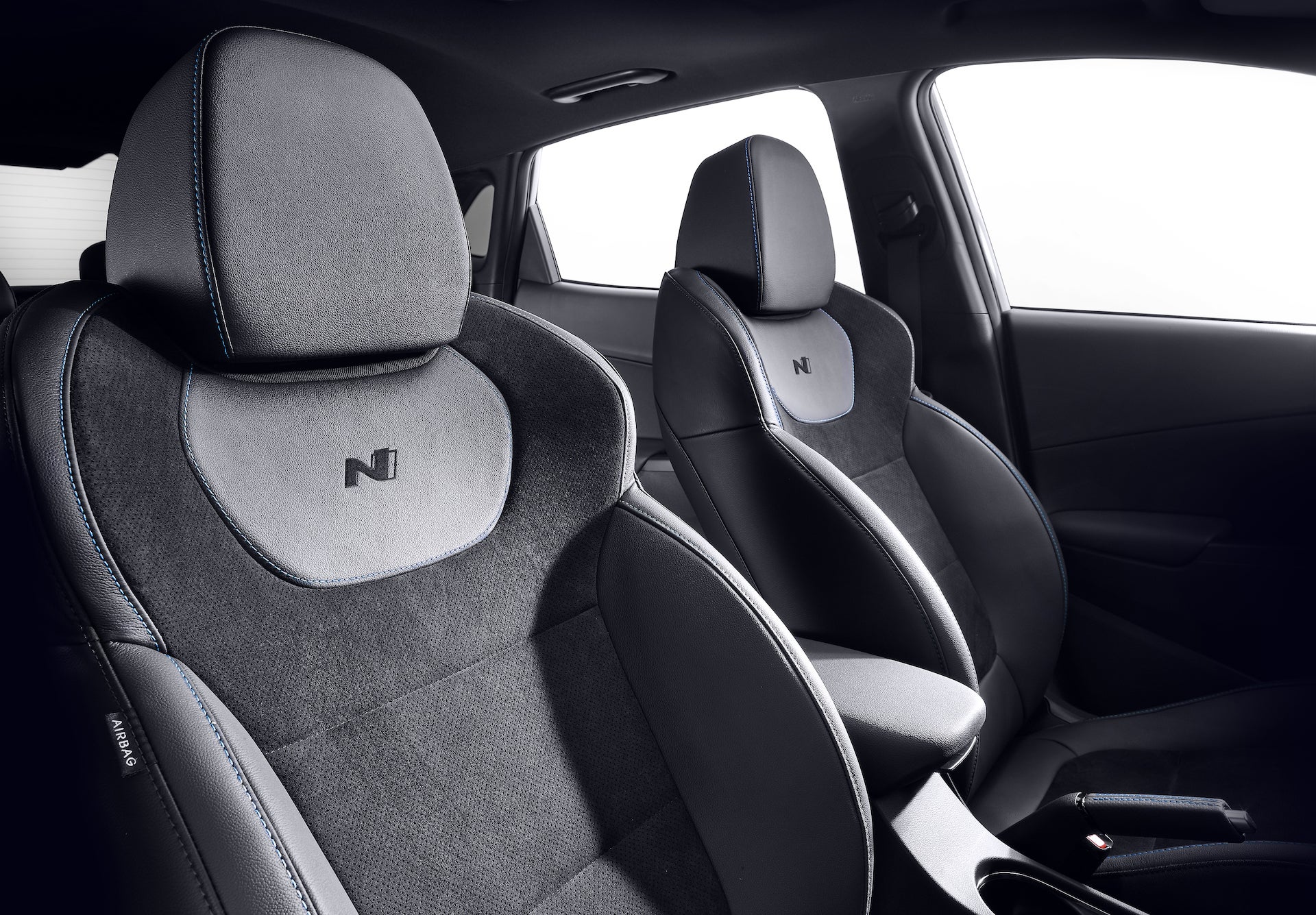 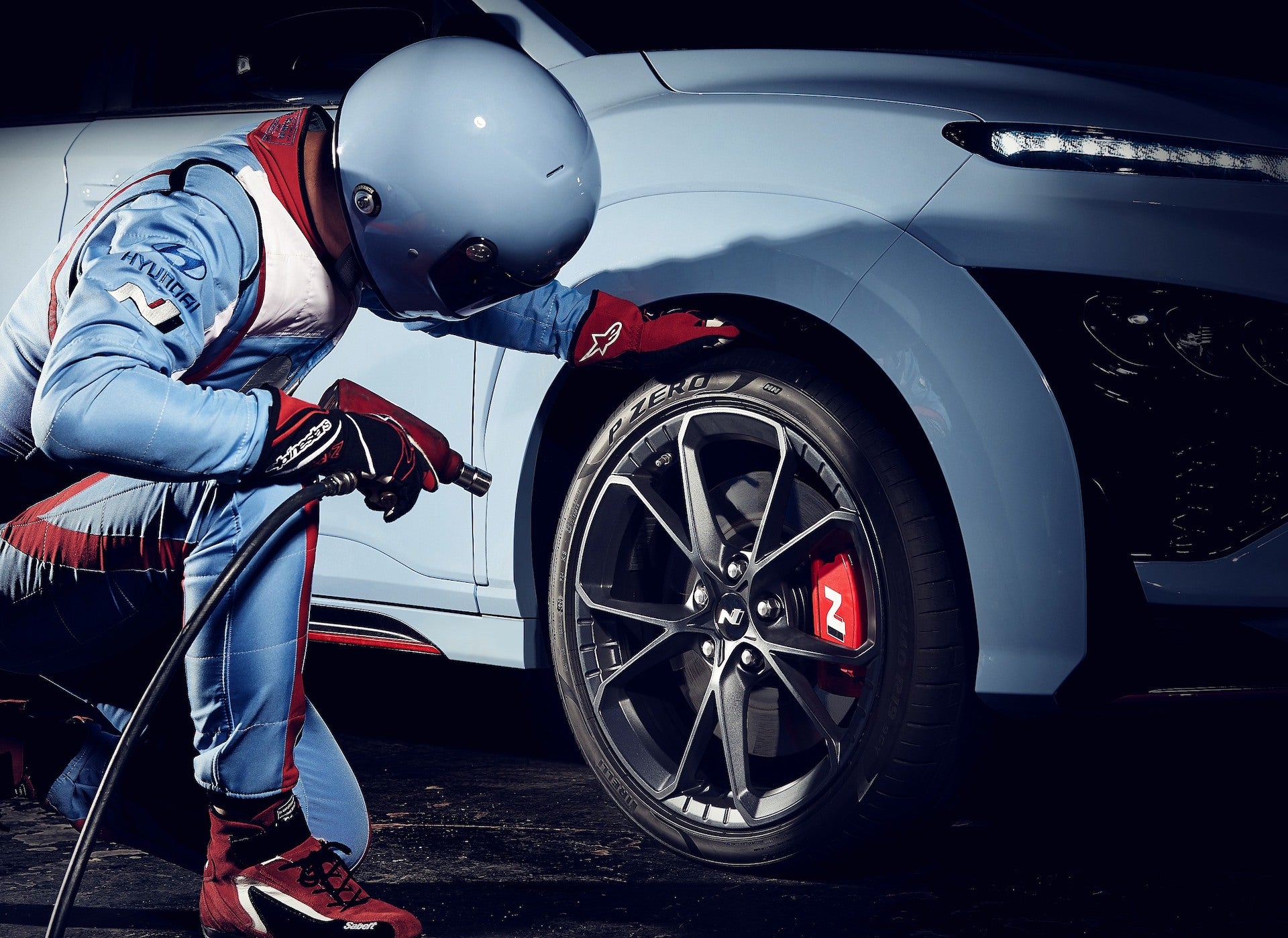 Behind the wheel, the Kona N introduces an exclusive, racing game-inspired HUD layout as well as performance-related readouts in the new 10-inch infotainment screen when the car is in Sport or N mode. Two dedicated N buttons on the steering wheel can act as shortcuts to custom drive modes, just like the M1 and M2 buttons found on the steering wheels of BMW M cars do. Hyundai’s rendition, however, can also toggle the lap timer.

For the European market, the Kona N will even come with something called N Road Sense which intelligently looks for double-curved road signs and recommends the driver put the thing in N mode when they come across one. It’s a hilariously cool use of what we’re presuming is the very same traffic sign recognition system that keeps tabs on speed limits and we’re kinda surprised nobody else thought of this sooner. This is very clearly the hooligan’s Hyundai Kona.

Despite what feels like manufacturers covering every and any niche these days, the Kona N will enter the market without much in the way of direct competition. There’s no such thing (yet) of a Toyota GR CH-R or a Honda HR-V Type R or a Ford Ecosport RS. The closest thing would probably be something like the Mercedes-AMG GLA 35 or the Audi RS Q3, the former of which is a lot more expensive and the latter of which isn’t even sold in America. Then you’ve got warmish crossovers like the new turbocharged Mazda CX-30 and the Chevrolet Blazer RS—closer in price, but not nearly as track capable.

Anywho, the Kona N’s official pricing and delivery timeline have yet to be announced, but expect that stuff to be released soon. 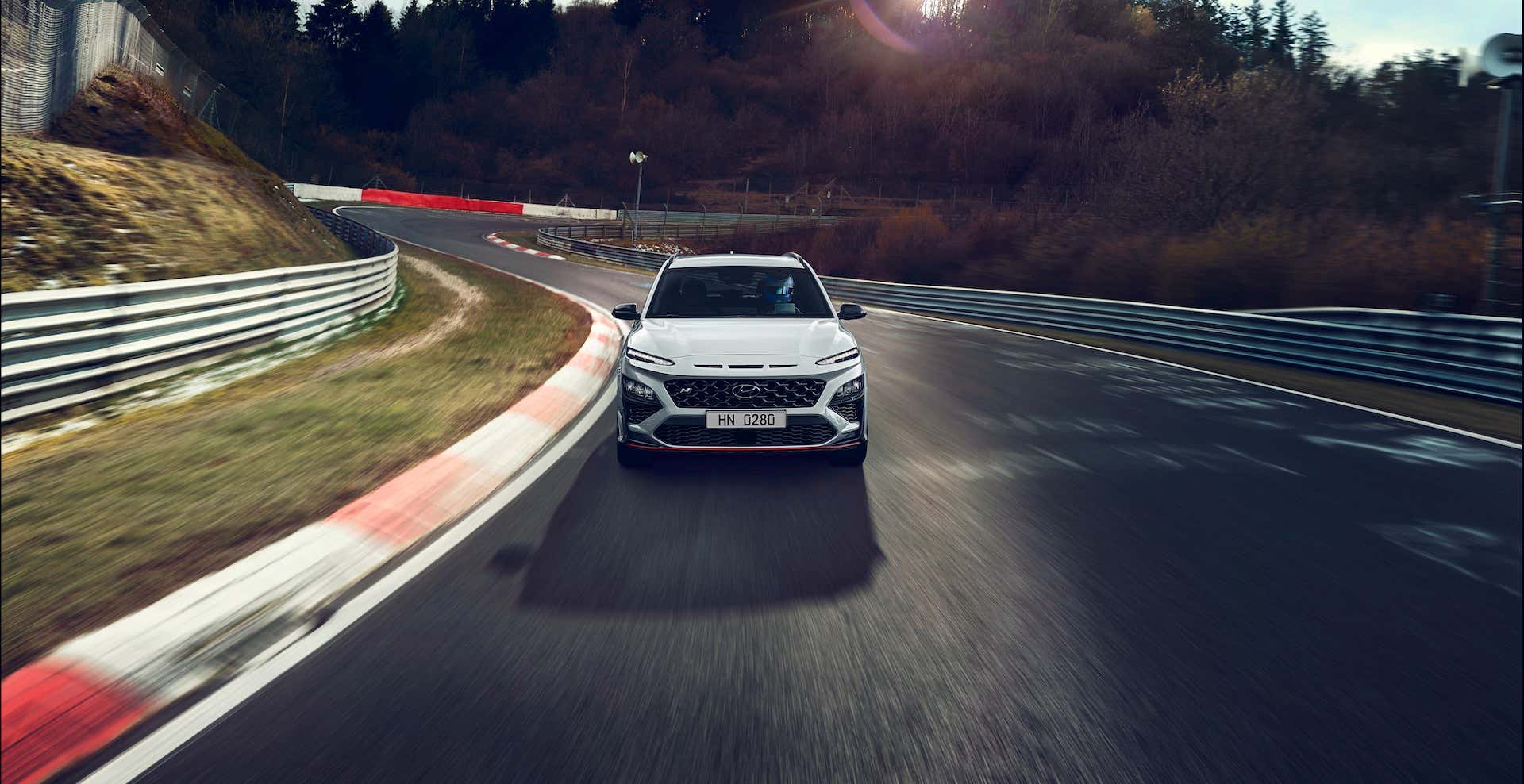