If you’re the sort of person who makes a beeline toward a Starbucks every time they need a caffeine fix, Volkswagen has the hot hatch for you. Well, two of them, actually: The redesigned 2022 Volkswagen Golf GTI and Golf R. Packing proven hardware and decidedly palatable and polished driving experiences, VW’s fast Golfs—the only Golfs available in the U.S. this time around, by the way—are the hot hatches enthusiasts go for by default.

It’s for the hot hatch driver who, when presented with slightly more distinct and offbeat choices like the Honda Civic Type R’s nitrous cold brew or the Hyundai Veloster N’s outrageous butter-filled keto coffee, will go with a Starbucks venti every time. The GTI and Golf R will get the job done—better than most, too—every time. You know exactly what you’re getting here. With more than respectable turbocharged power, near-luxury features and the classic, practical Golf hatchback body, they represent a value that’s nearly impossible to beat.

But like those annoying touchscreen ordering kiosks, however, this eighth-gen Golf’s all-touch, all-the-time interior has made life inside VW’s hot hatch quite a bit harder. Let’s unpack. 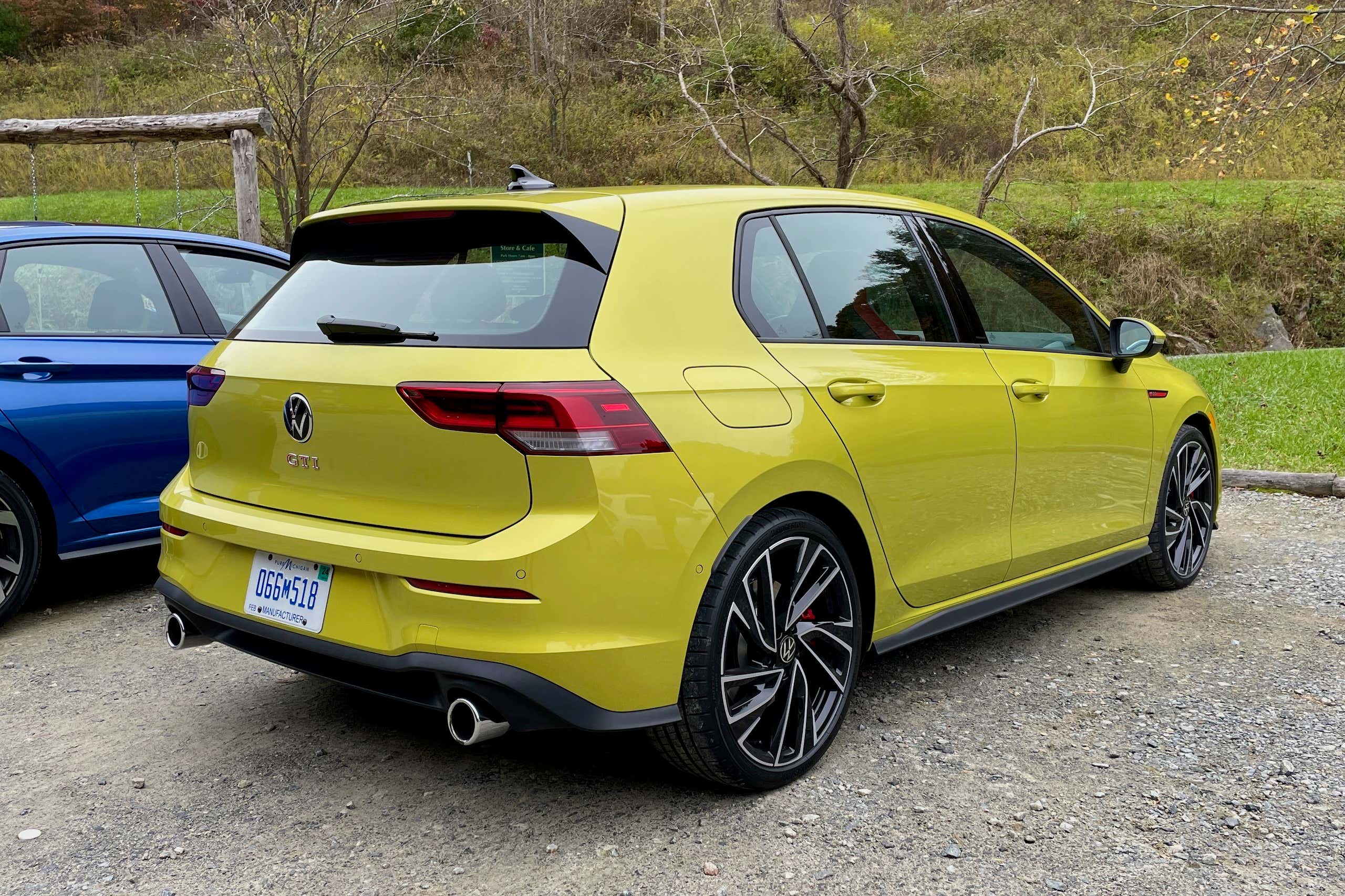 2022 Volkswagen Golf GTI: By the Numbers

2022 Volkswagen Golf R: By the Numbers 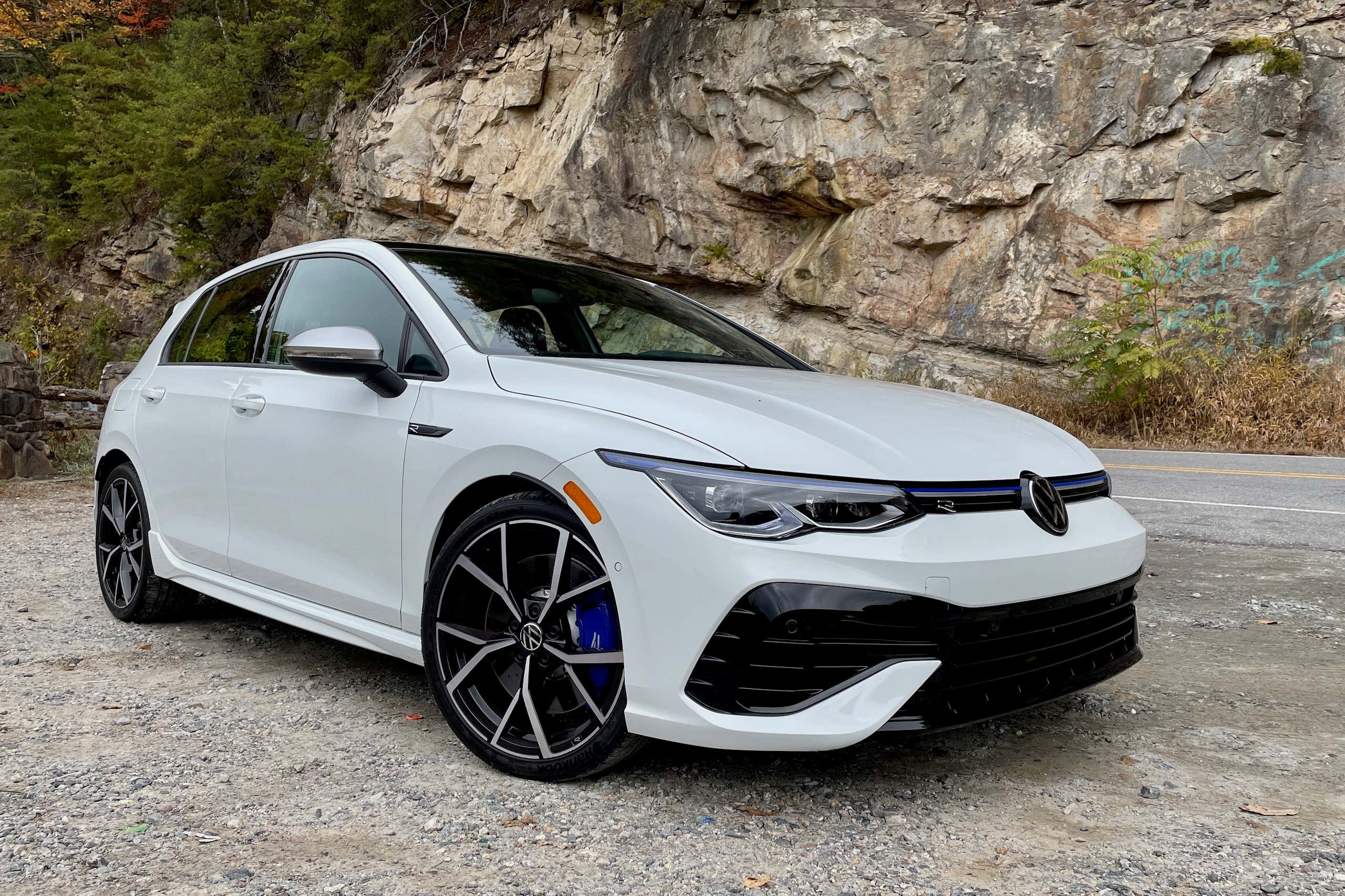 This eighth-generation Golf continues to ride on an evolved and enhanced version of VW’s long-running modular MQB platform while sporting a squintier, more chiseled exterior design. The wheelbase is unchanged versus the last generation but the car is longer overall by precisely 0.9 inches.

I’m a fan of the new look. It keeps things fresh without losing the Golf’s signature proportions and chill, Teutonic vibe. The “GTI” and “R” badges on the rear hatch have moved to the center with the hubris of an Apple product while the word “Volkswagen” hangs out nonchalantly at the bottom of the B-pillar, all cool and casual-like. 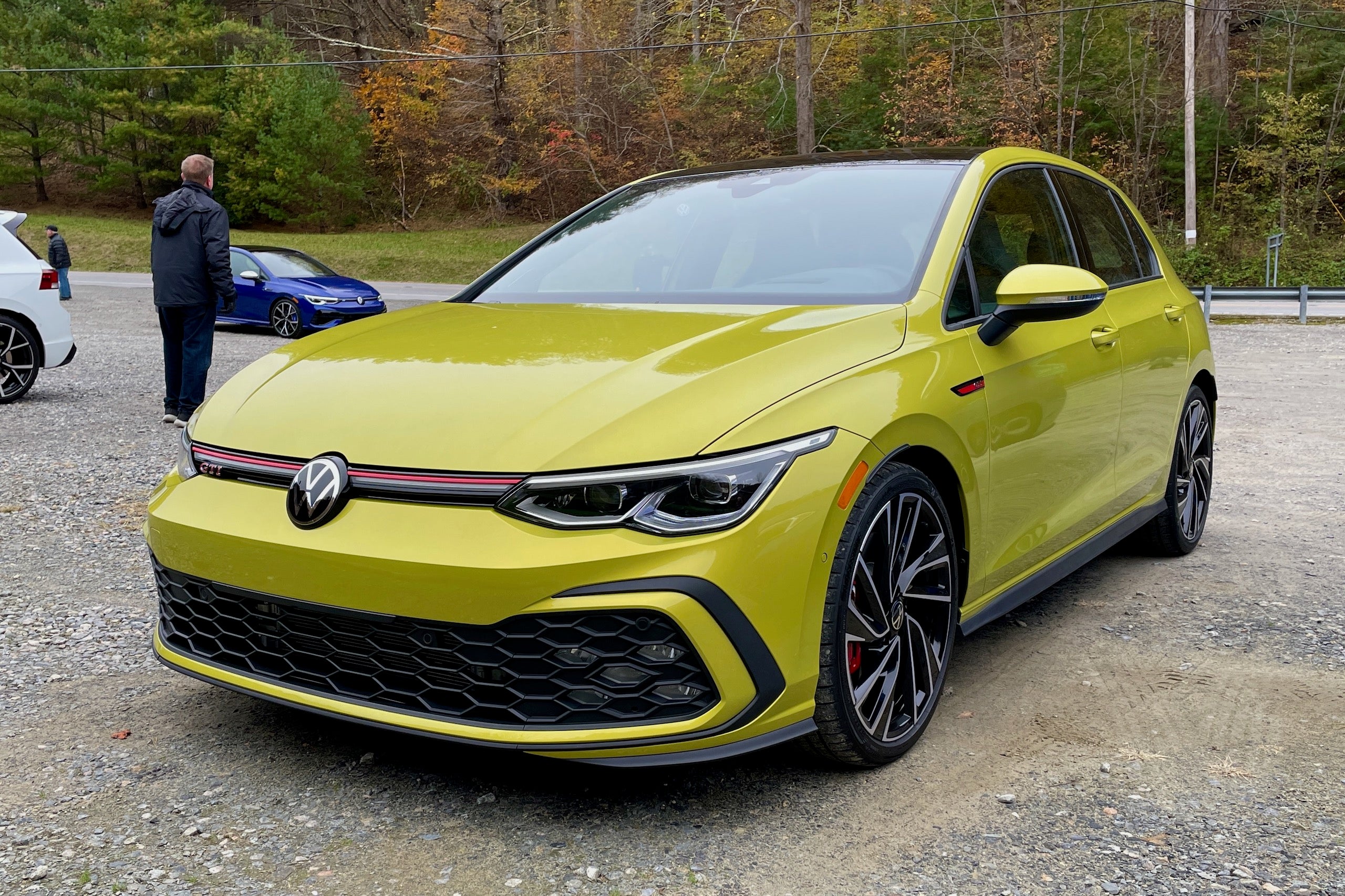 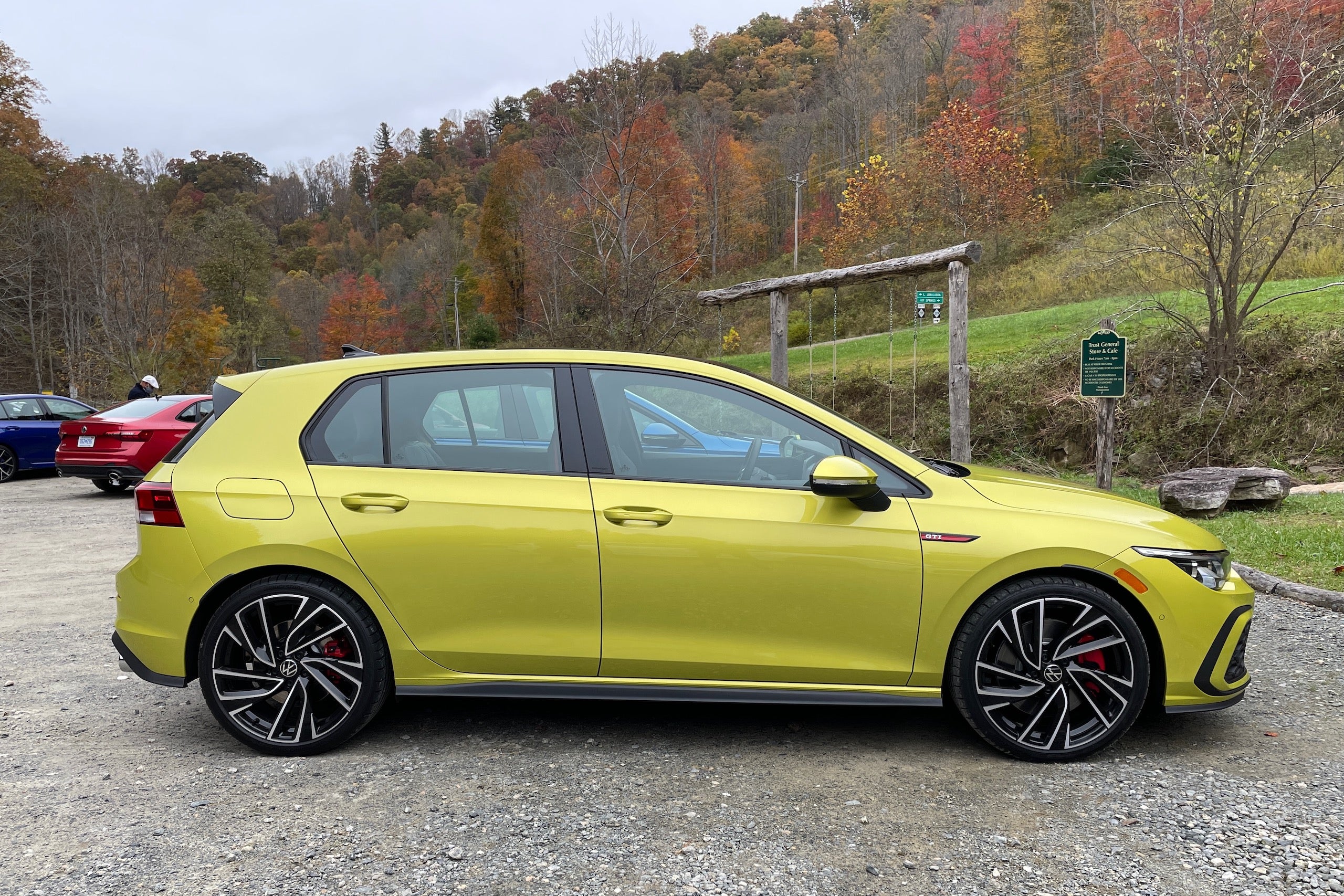 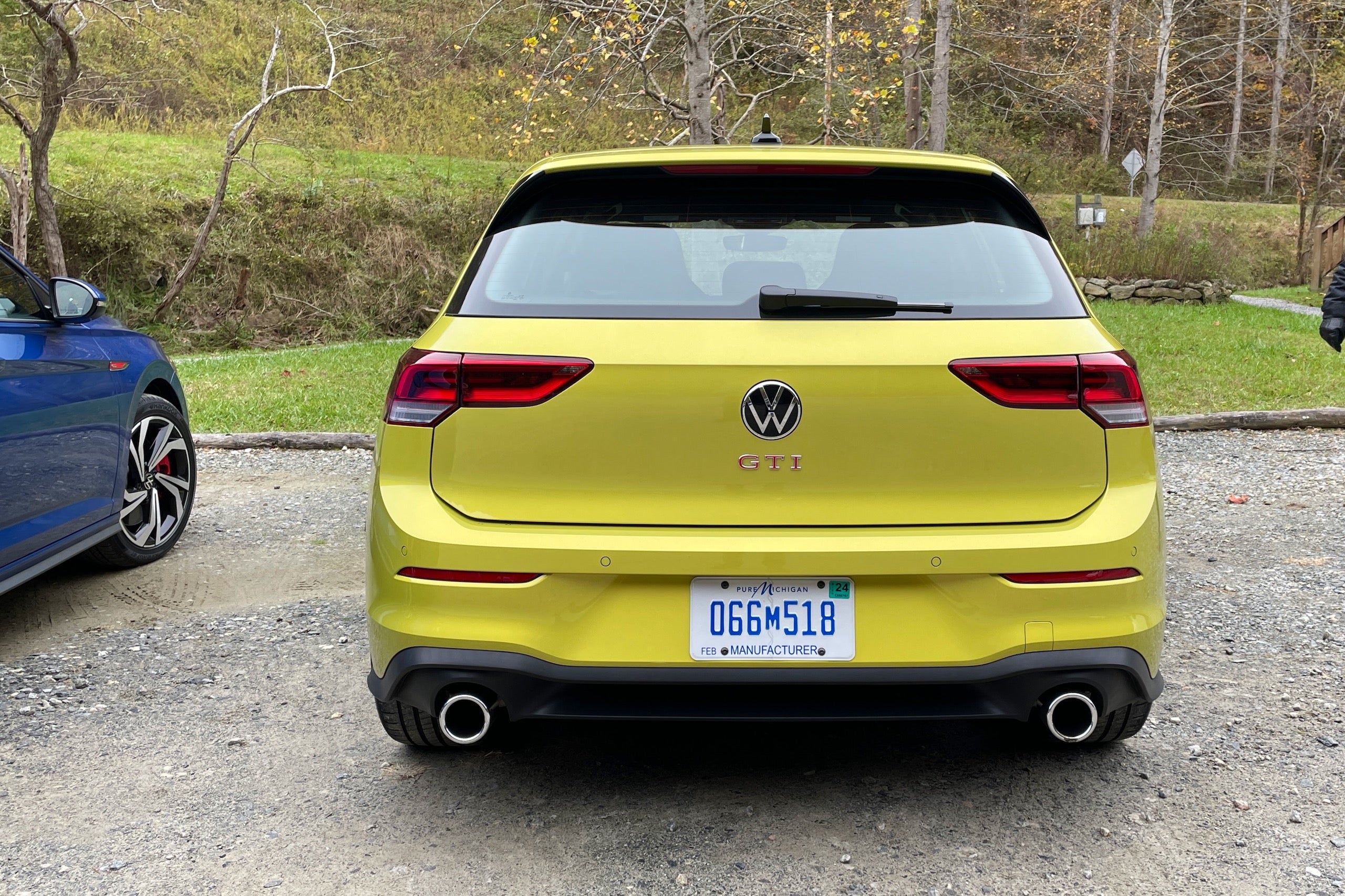 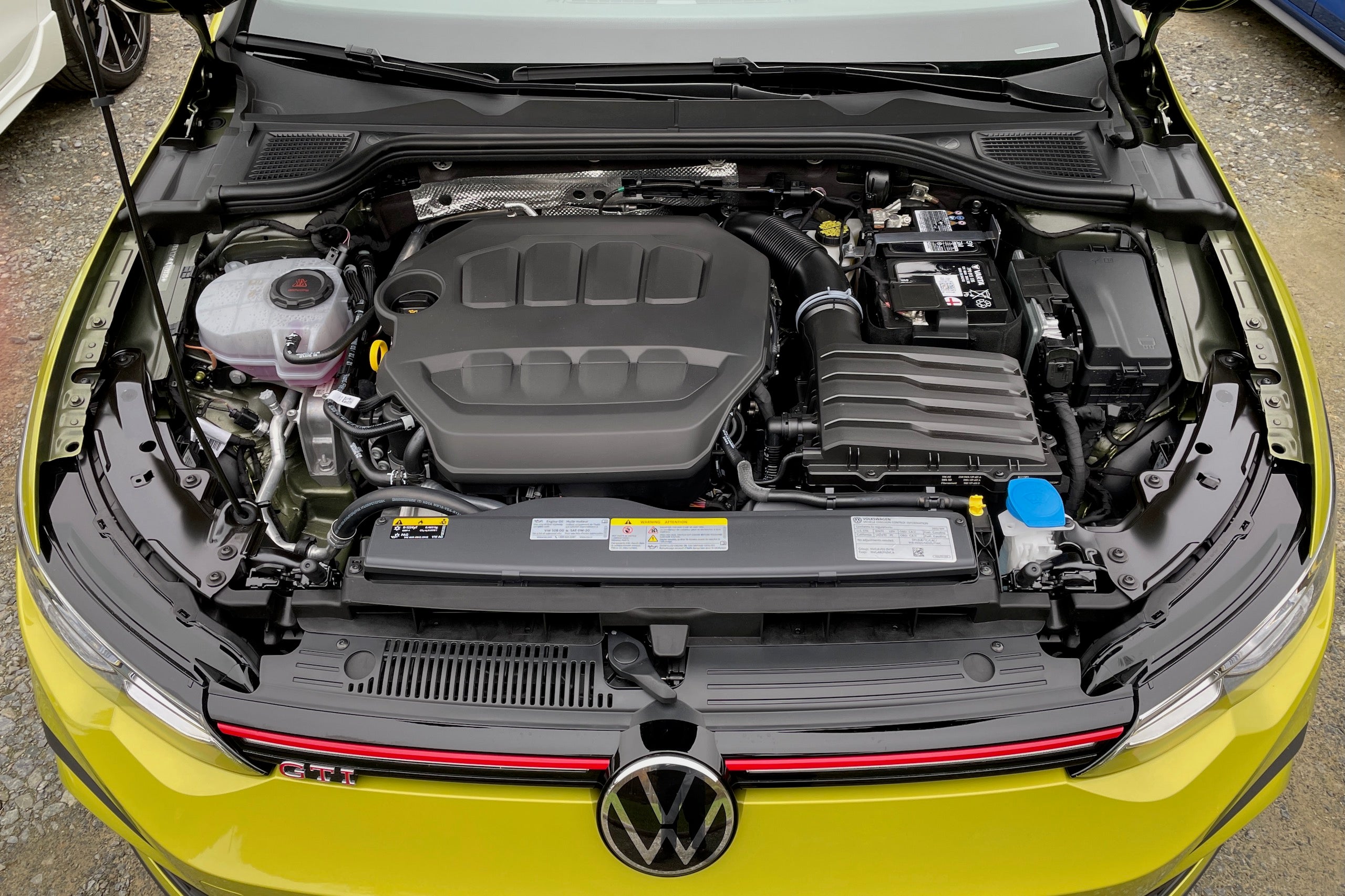 Both the Golf GTI and Golf R are powered by an updated version of VW’s immensely tuneable EA888 turbocharged, 2.0-liter four-cylinder, now producing 241 horsepower in the GTI and 315 hp in the R—up 13 and 27 hp, respectively—making the latter the most powerful production Golf ever. As with the platform itself, it’s the same engine as the previous generation, but with some significant improvements. Volkswagen says the engine has been tweaked to deliver fuel with more pressure than before while internal friction has been reduced, apparently leading to a broader torque band and improved sound.

And as before, the GTI is front-drive only while the Golf R features all-wheel drive. Up to 50 percent of the R’s power can be sent to the rear wheels while a new Ford Focus RS-esque drift mode directs 100 percent of that torque to either rear wheel. Spring rates have been increased by anywhere from five to 15 percent all around for both cars, while a new aluminum subframe has shaved seven pounds from the front suspension assembly.

Finally, rounding out this generation’s major changes, we have an interior with a whole lot of screen, a whole lot of touch sensitivity, and a whole lot of glossy black plastic. It replaces the Mk7 Golf’s immensely logical, button-and-knob-based interior design, and as I’ll explain in a bit, it’s hardly what I’d call an upgrade. 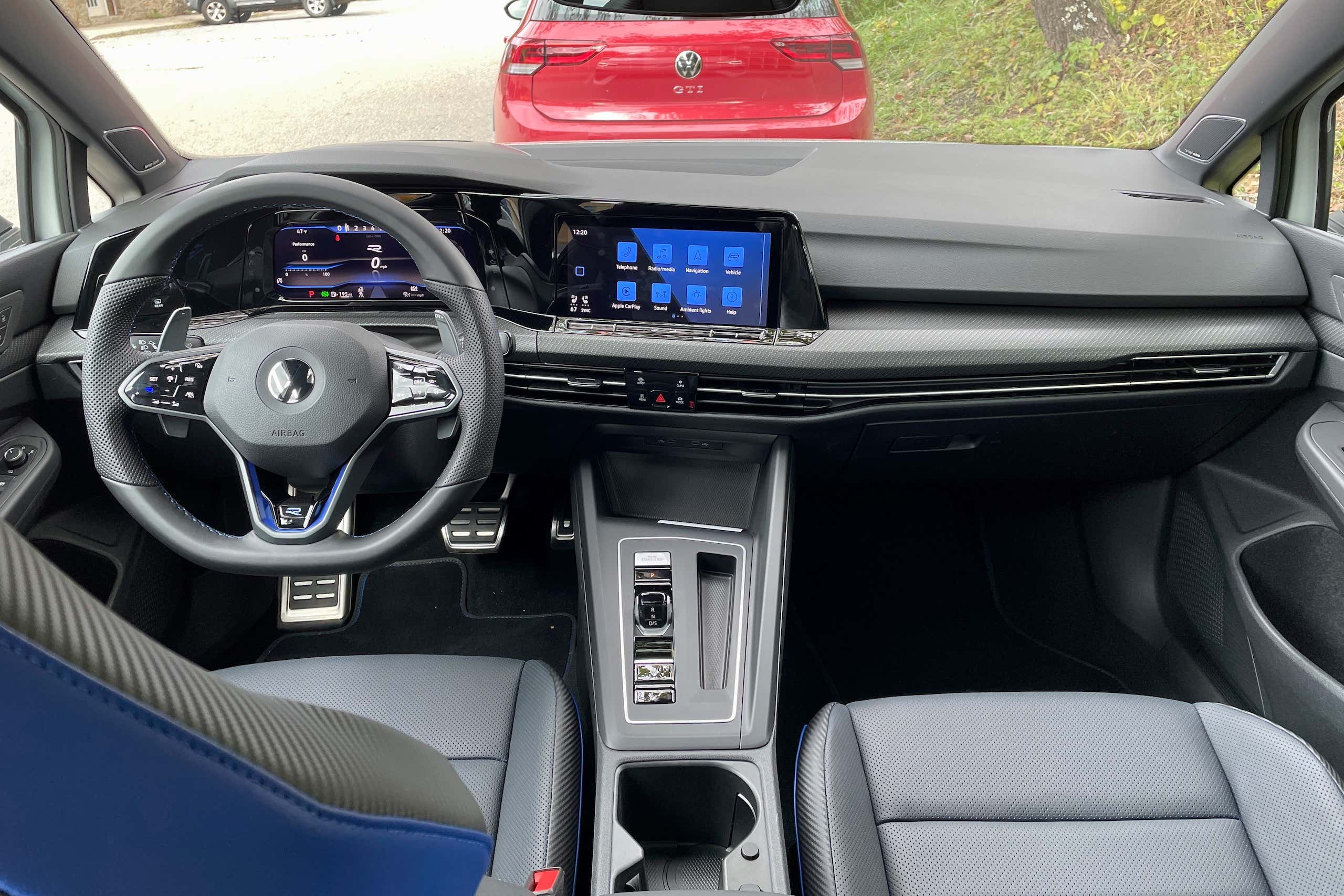 Before I moan about touchscreens, though, let’s talk hoon-ability.

Both the GTI and Golf R dole out more than respectable straight-line pace, with both models providing ample entertainment and speed around North Carolina’s delightfully twisty backroads. Turbo lag is scarce from both cars which means accessible torque from pretty much anywhere in the rev range, almost to the point of making manual downshifts unnecessary.

Speaking of, both the GTI and Golf R are available with your choice of either a seven-speed DSG automatic or six-speed manual gearbox. The latter option does indeed provide an additional level of engagement that should satisfy purists but leaves room for tactile and ergonomic improvement. The clutch pedal, for example—while decently weighted for both spirited and everyday driving—is positioned a little too far to the right, causing my shoe to get caught on a piece of trim on the left while letting the clutch out on multiple occasions before I adapted to the driving position. Not ideal.

The gearshift action, meanwhile, is reasonably hefty and notchy but doesn’t feel significantly better or more special than the manual shifter you’d get in, say, a regular-ass Honda Civic or a Canadian Nissan Sentra. 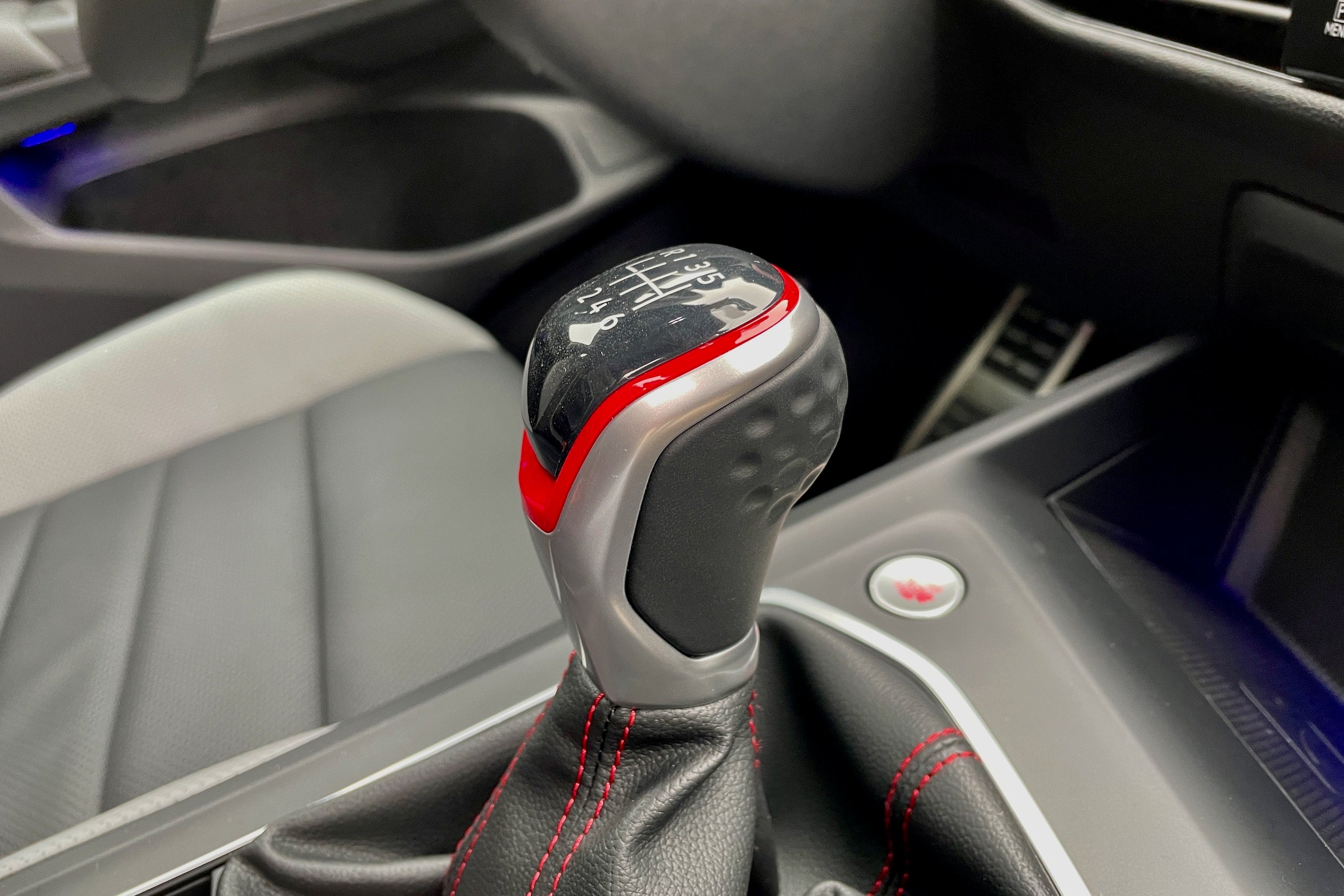 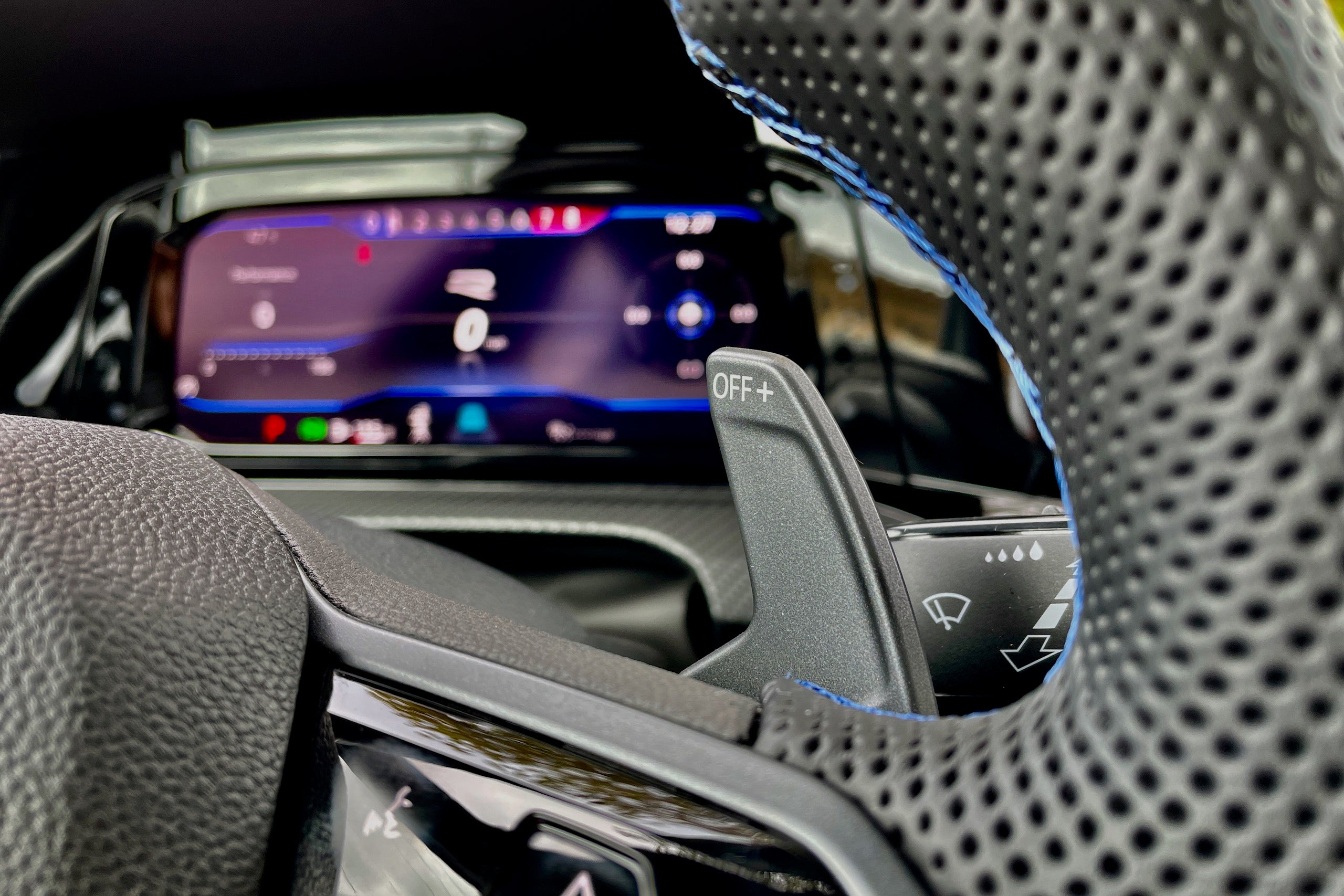 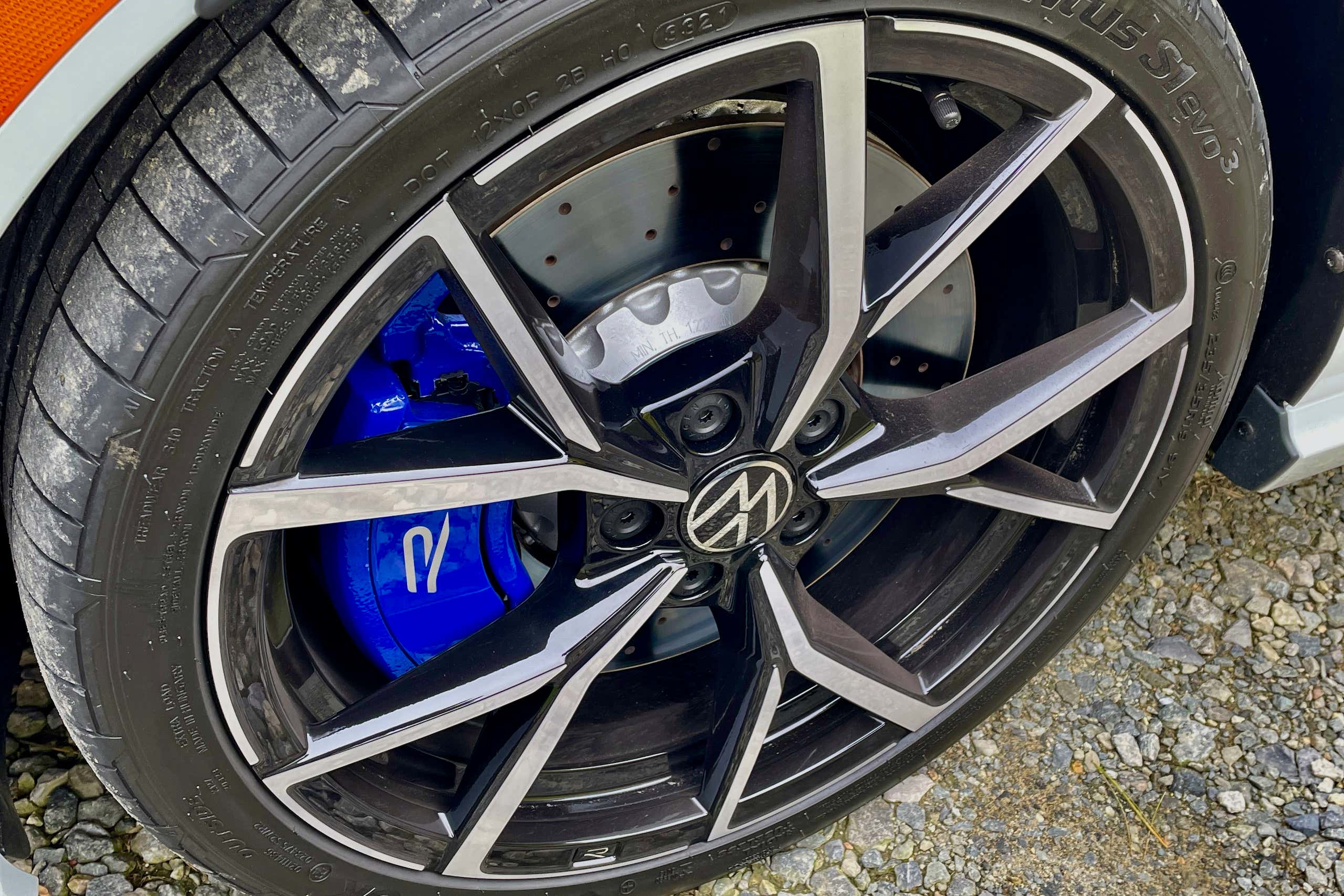 Similarly, the DSGs are also solid, but the competition is finally starting to catch up. Volkswagen’s dual-clutch auto does its thing smoothly, smartly, and with little complication when left to its own devices but paddle-operated manual upshifts don’t happen quite as quickly as they do with other dual-clutch ‘boxes out there like, for example, the ones in the Hyundai Veloster N or the Mercedes-AMG A 35 AMG. Like those other hot hatches, both the GTI’s and Golf R’s exhausts have been programmed to periodically spit out little pops and burbles on upshifts and throttle lift-off to give the cars a nice albeit artificial splash of character.

When faced with corners, both Golfs exhibit a great sense of balance and response while steering is well-calibrated. None of it is quite as aggressive or visceral in personality as much of the competition but Volkswagen’s pair of hot hatches can definitely do the dance while remaining completely comfortable to live with. 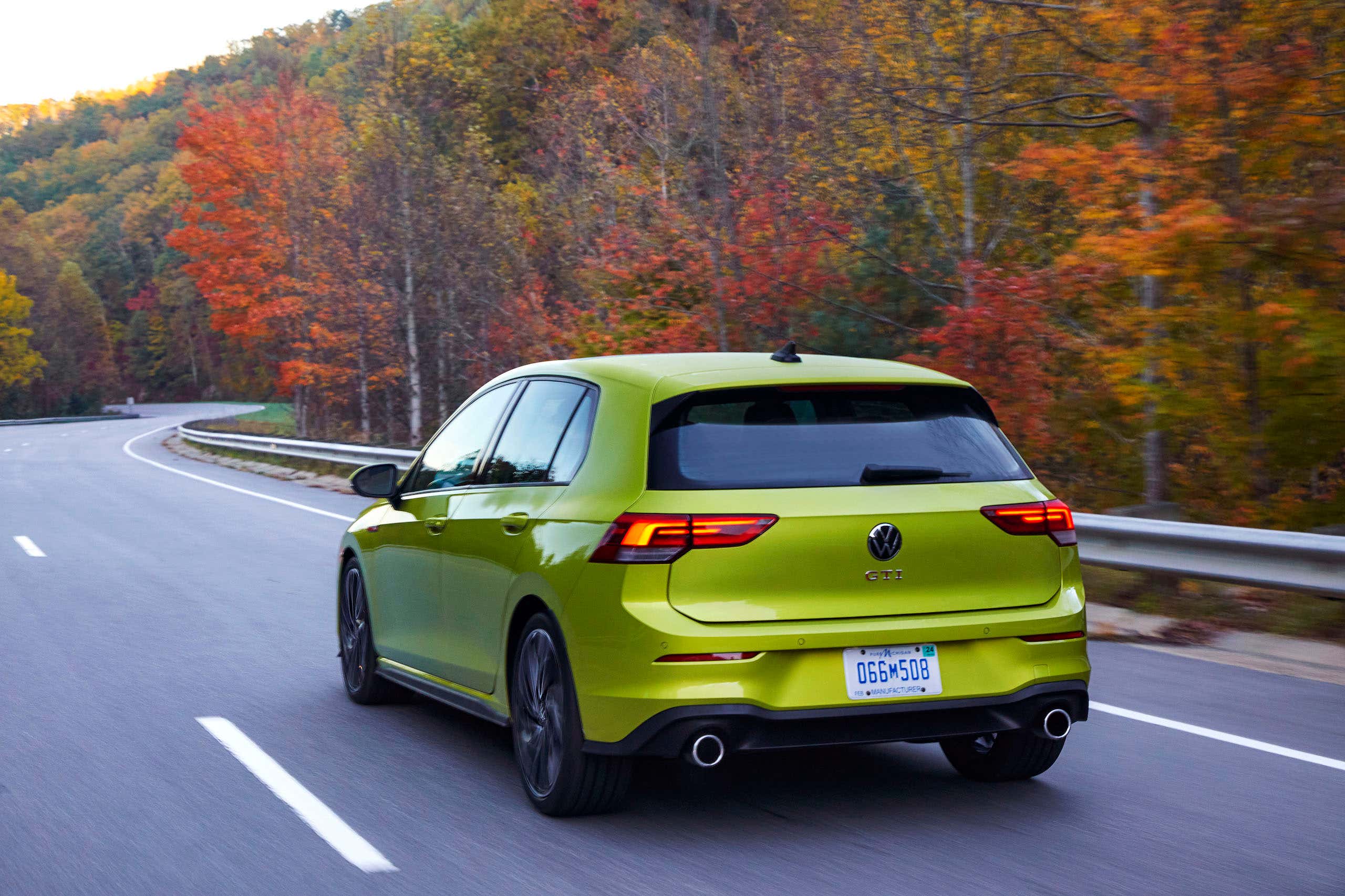 Somewhat surprisingly, the difference between the two did not feel as significant as I expected. With the R being all-wheel-drive, it definitely blasts out of corners with a higher degree of confidence than its front-drive GTI sibling, while the lighter GTI changes direction with a smidge more eagerness than the R. But truth be told, these disparities weren’t exactly night and day.

Golf R fans with inferiority complexes really aren’t going to like hearing this, but this relative lack of differentiation extends to the sheer speed on tap as well. At autobahn speeds, sure, the 315-hp Golf R is a certifiably more capable car than the 241-horse GTI.

But on anything tighter and slower—like, for example, the extremely twisty and enjoyable backroads of Asheville—low-down torque is the key metric and how the GTI keeps up with its more expensive, blue-trimmed twin. The GTI, with either gearbox, makes 273 pound-feet while the manual R is good for 280 and the DSG 295. Hardly a huge difference and, as anyone with a good grasp on grade school math will have already figured out, the torque gulf between the GTI and manual R is actually smaller than the gap between manual and automatic Golf R. 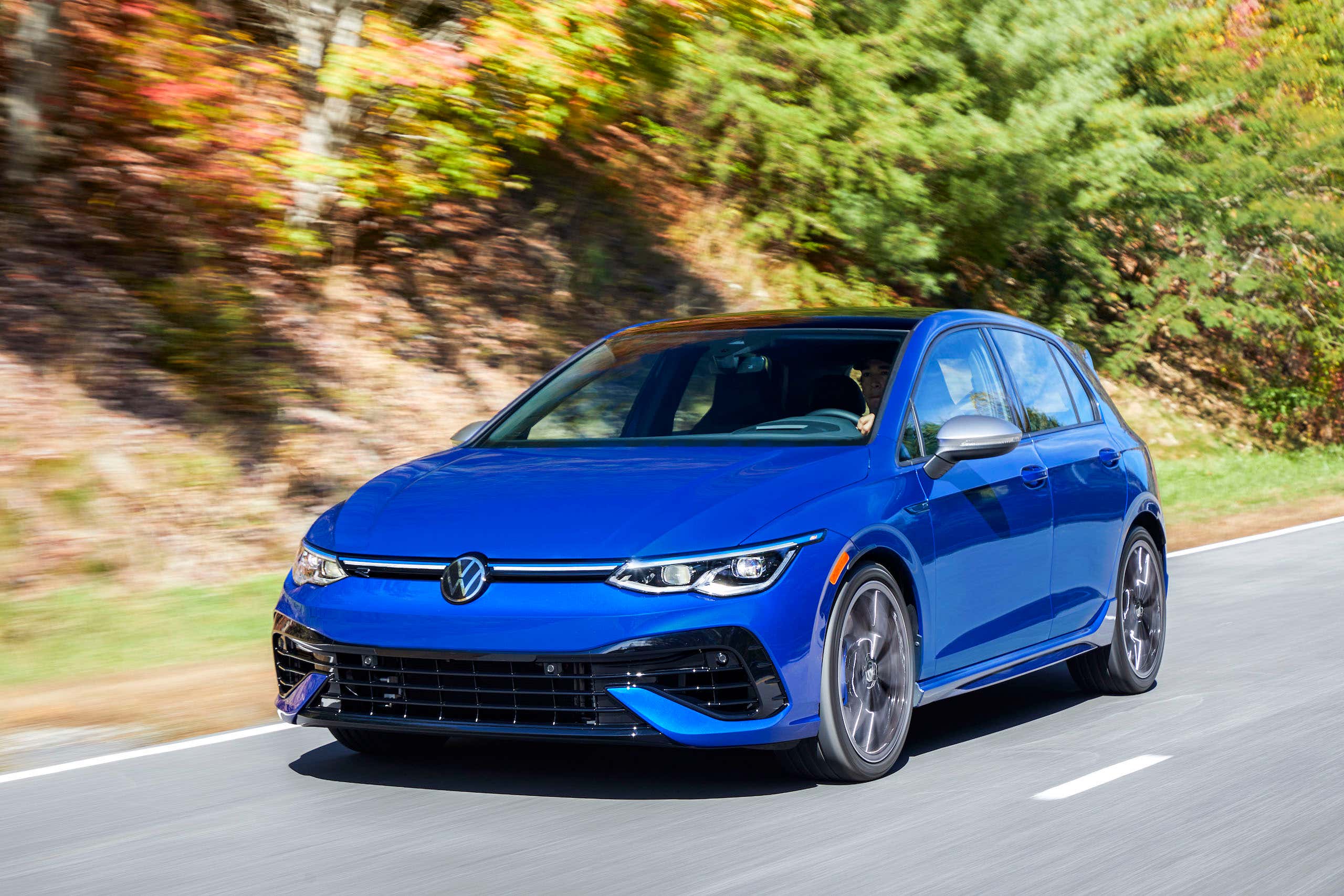 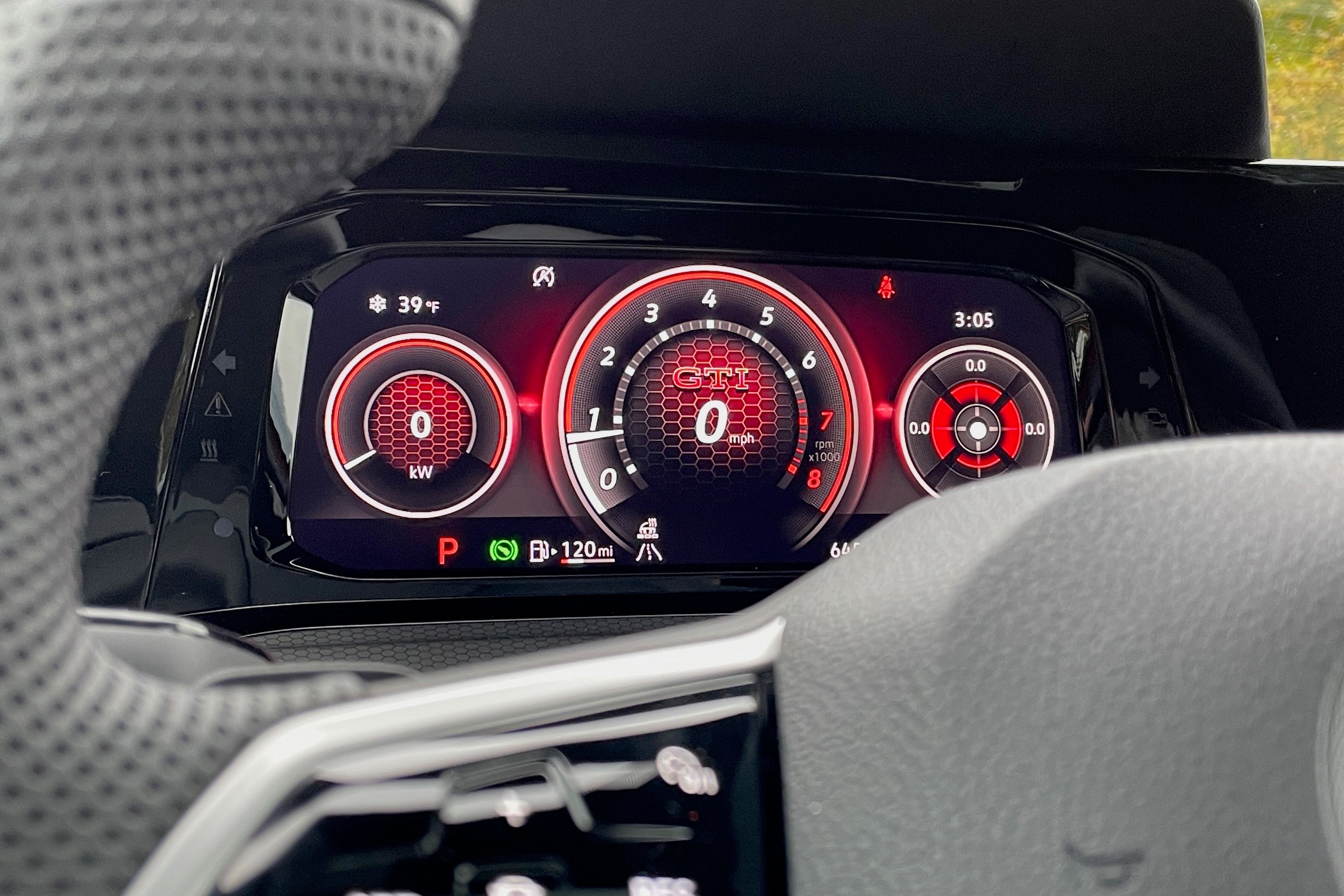 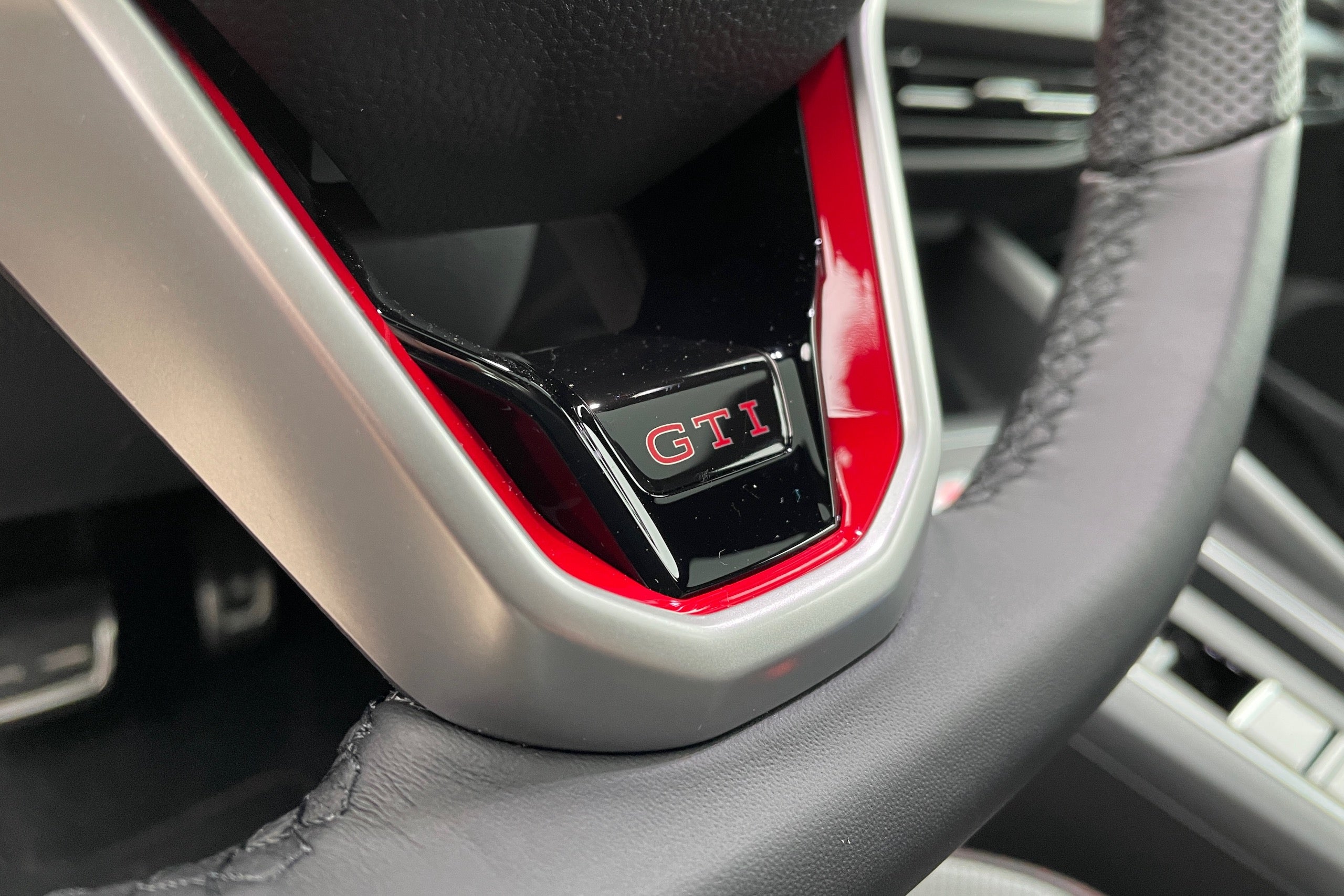 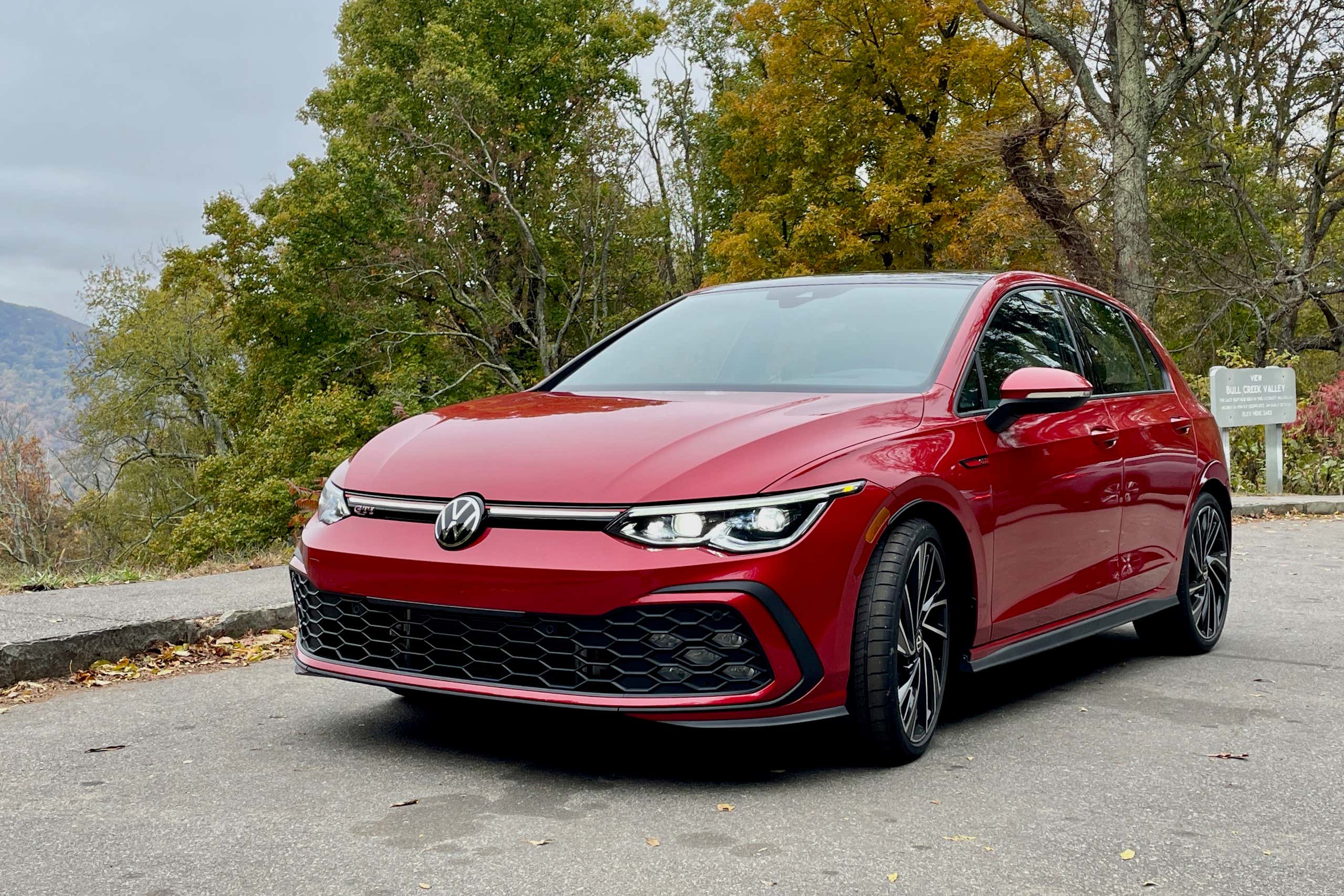 As for which one I’d take between the two, you really can’t go wrong with either. But if it were my money, a manual GTI would be the one I’d park in my garage. It’s pretty much just as quick as the R in most real-life situations, feels lighter on its feet in the corners, and costs significantly less money. Its aesthetic is also more whimsical than the more serious and sterile-looking Golf R, what with its dimpled golf ball shifter, red front-grille lipstick, and plaid seats.

On the subject of the interior, it seems like every notable new car these days launches with its fair share of mild controversy. The Mk8 Golf is no different, including the fact that the base, non-performance model isn’t even offered in this continent. Enjoy it, Europe. VW wants us in a Tiguan or, better yet, an ID.4 instead.

Even worse, to the dismay of what feels like everybody who’s encountered it, the new Golf features an extremely touch-dependent, minimalist interior that—while quite clean and good-looking in brochure photos—is kind of a pain in the ass to use in real life.

Integrated into the same glossy black plastic piece as the standard 10.25-inch digital gauge cluster is a 10-inch infotainment touchscreen. Pretty standard stuff for a nice-ish car made in 2021, and that main screen is reasonably easy to learn and navigate. But then you have the touch-sensitive bar underneath that encompasses volume control and temperature control. And the touch-sensitive shortcuts beneath that that bring up the screens dedicated to driving assists, detailed climate control, parking assists, and drive modes. On the left-hand side of the gauges, you’ve got lighting and window heating buttons that are, you guessed it, also touch-sensitive.

Most egregiously, however, Volkswagen has even opted to have all of the steering wheel controls be exclusively touch-dependent. 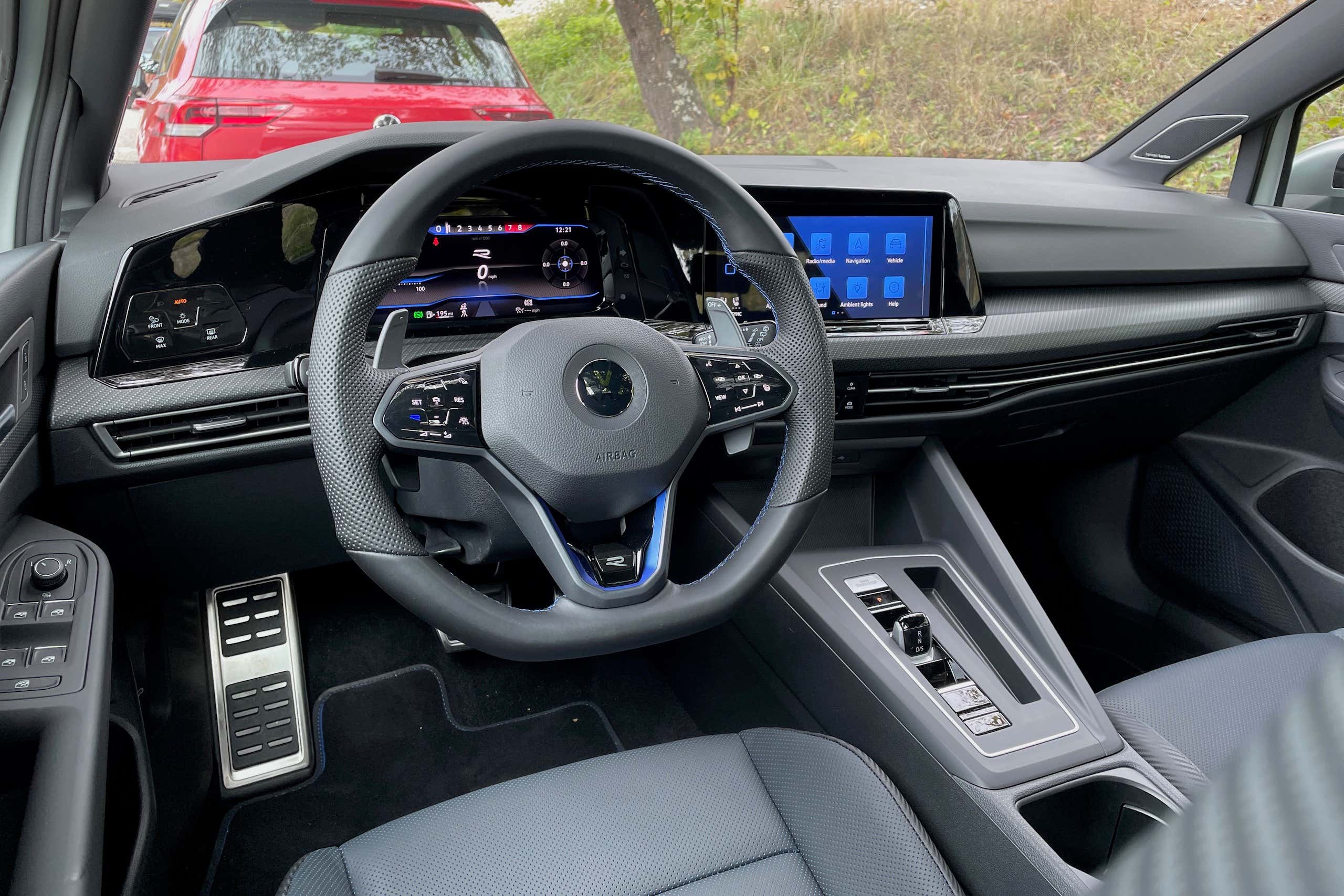 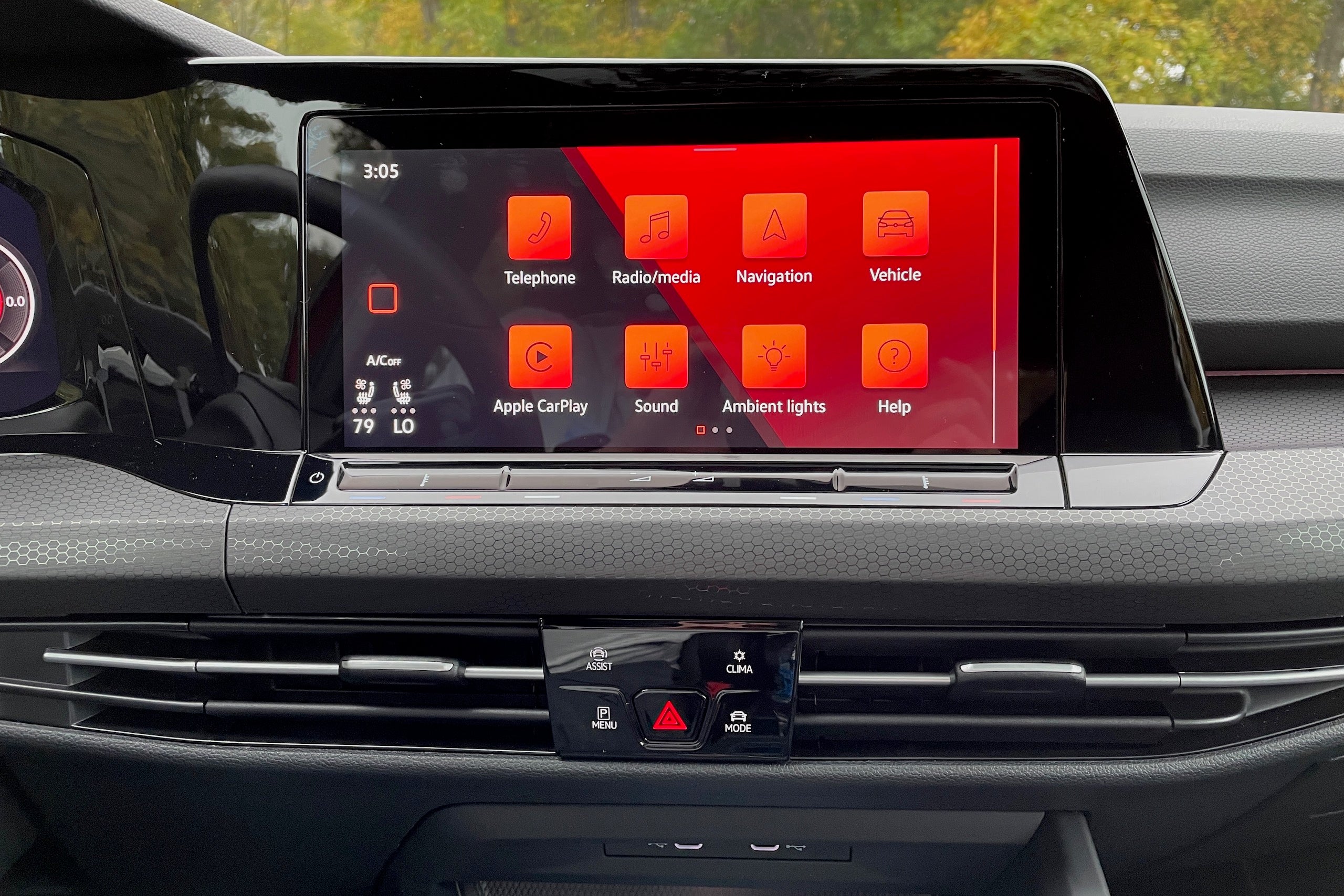 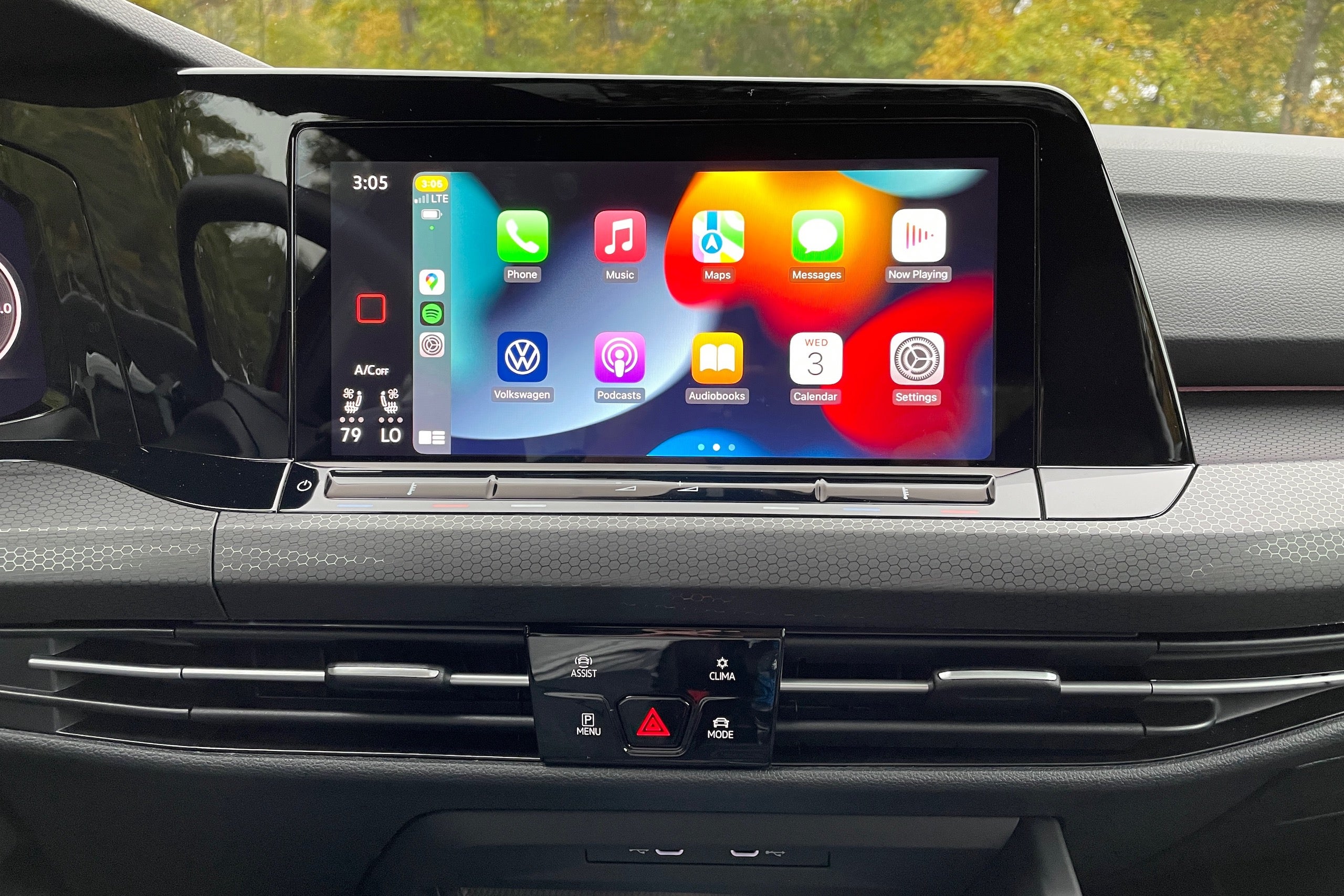 At this point, we shouldn’t have to explain why relegating this much to touch controls in a car is bad but we’re going to anyway for posterity. Because of its lack of tactility, touch controls are inherently difficult to use without looking at ’em and if a car requires the driver to look away from the road for even a second to, say, turn Spotify down a notch, this is objectively a flaw.

Look, I get it. Touchscreens and touch buttons feel fancy and shiny on the dealership floor to the Average Jane or Joe who hasn’t set foot inside of a new car showroom in the past 10 years. They associate clean, black mirror surfaces with New Hotness while traditional buttons and switches are Old and Busted. It’s also cheaper to manufacture one screen than to produce and install several buttons.

More positively, though, build quality inside of Volkswagen’s new hatchbacks remains high with the Golf’s piano-colored screen panel exhibiting exactly zero creaks even when pulled on quite hard. Relatively thin A-pillars and a no-nonsense greenhouse mean outward visibility is also good and despite the nonsensical touch elements, I quite like how the subtly chiseled and three-stage heated steering wheel feels in the hand.

The front seats, with newly fixed headrests, are decently bolstered and comfortable although softer material where the knee touches the center console would’ve been appreciated especially during copious amounts of hard cornering. The rear seats, meanwhile, are reasonably spacious with a generous amount of headroom for a small car like this. 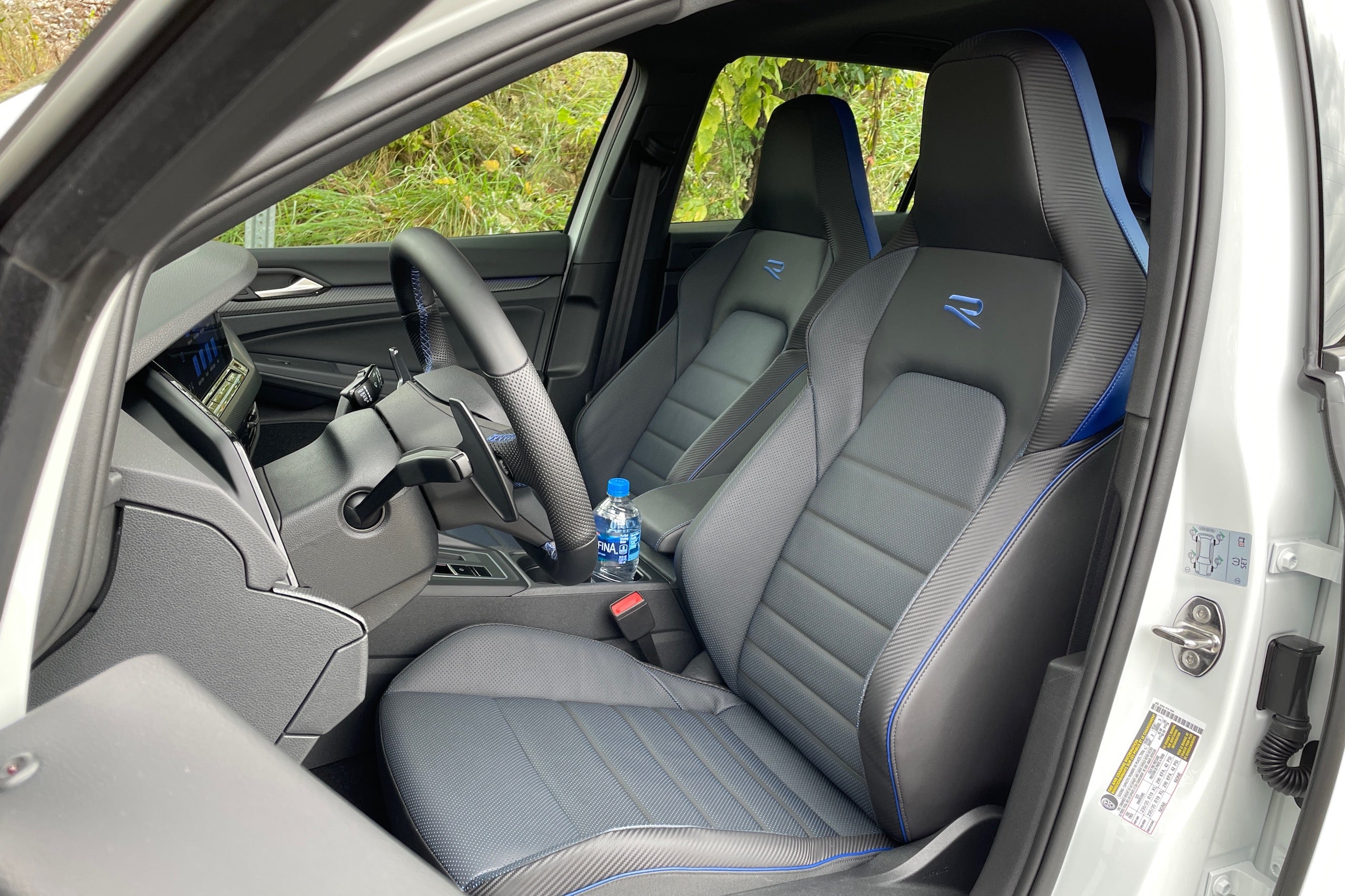 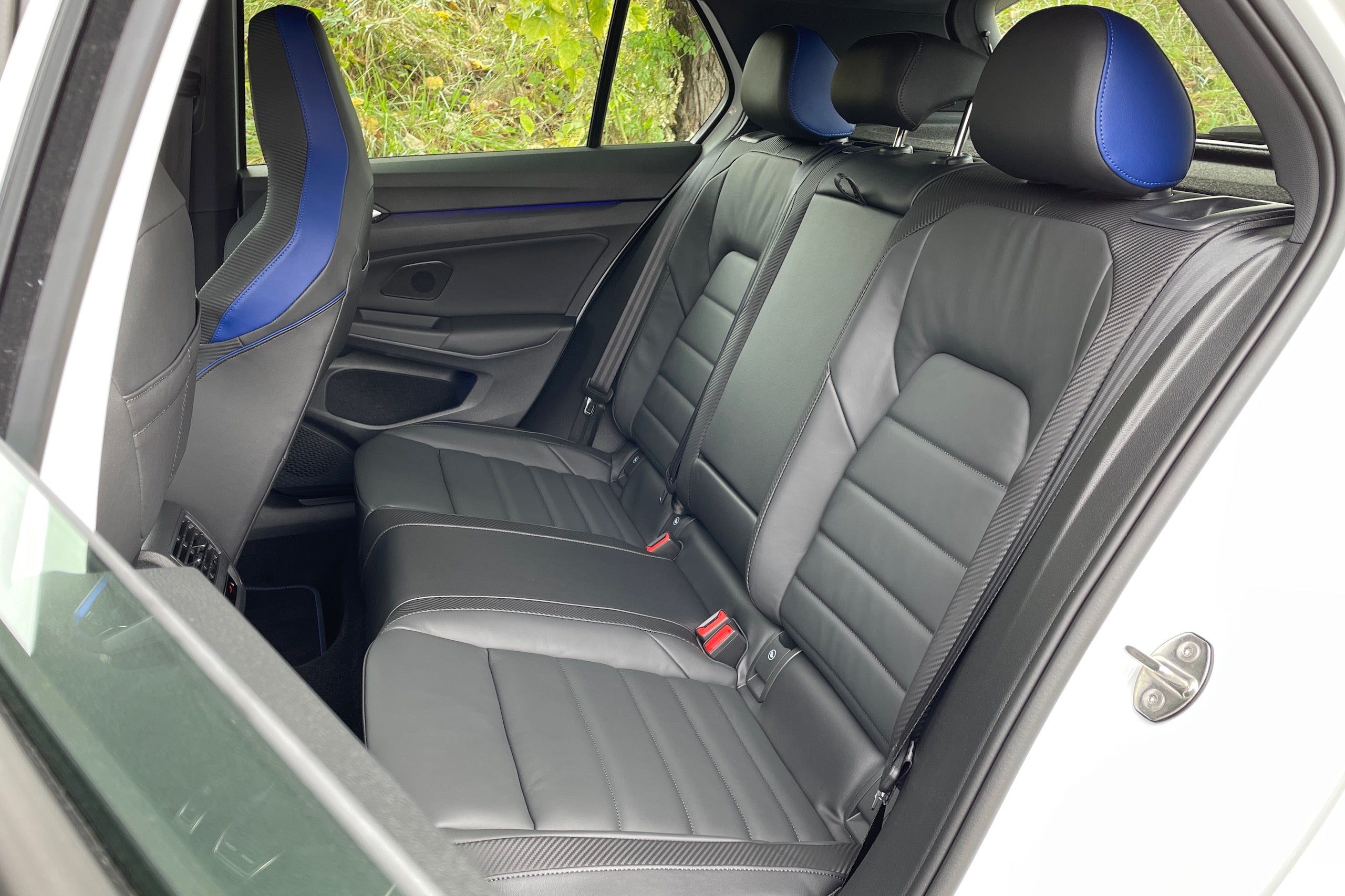 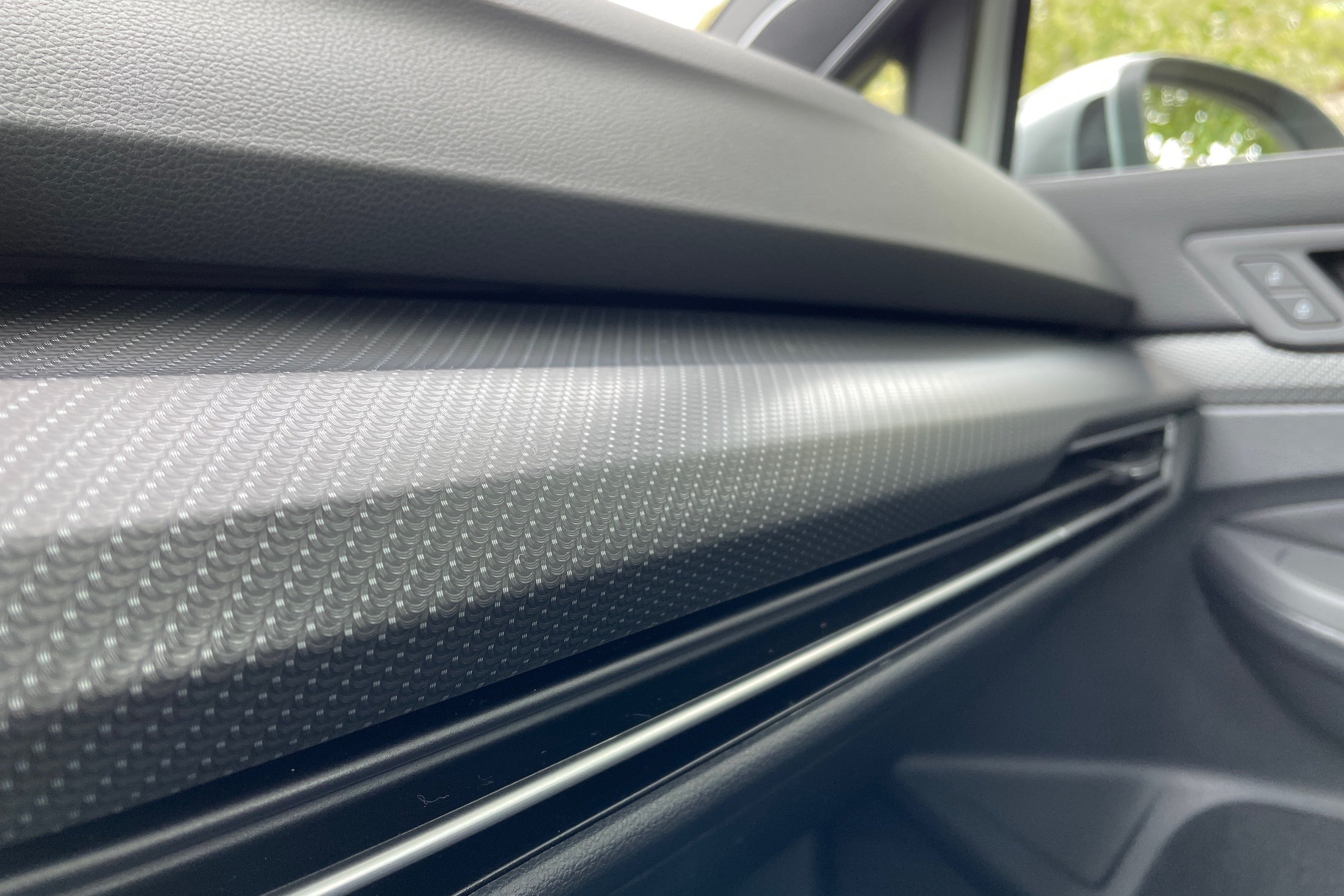 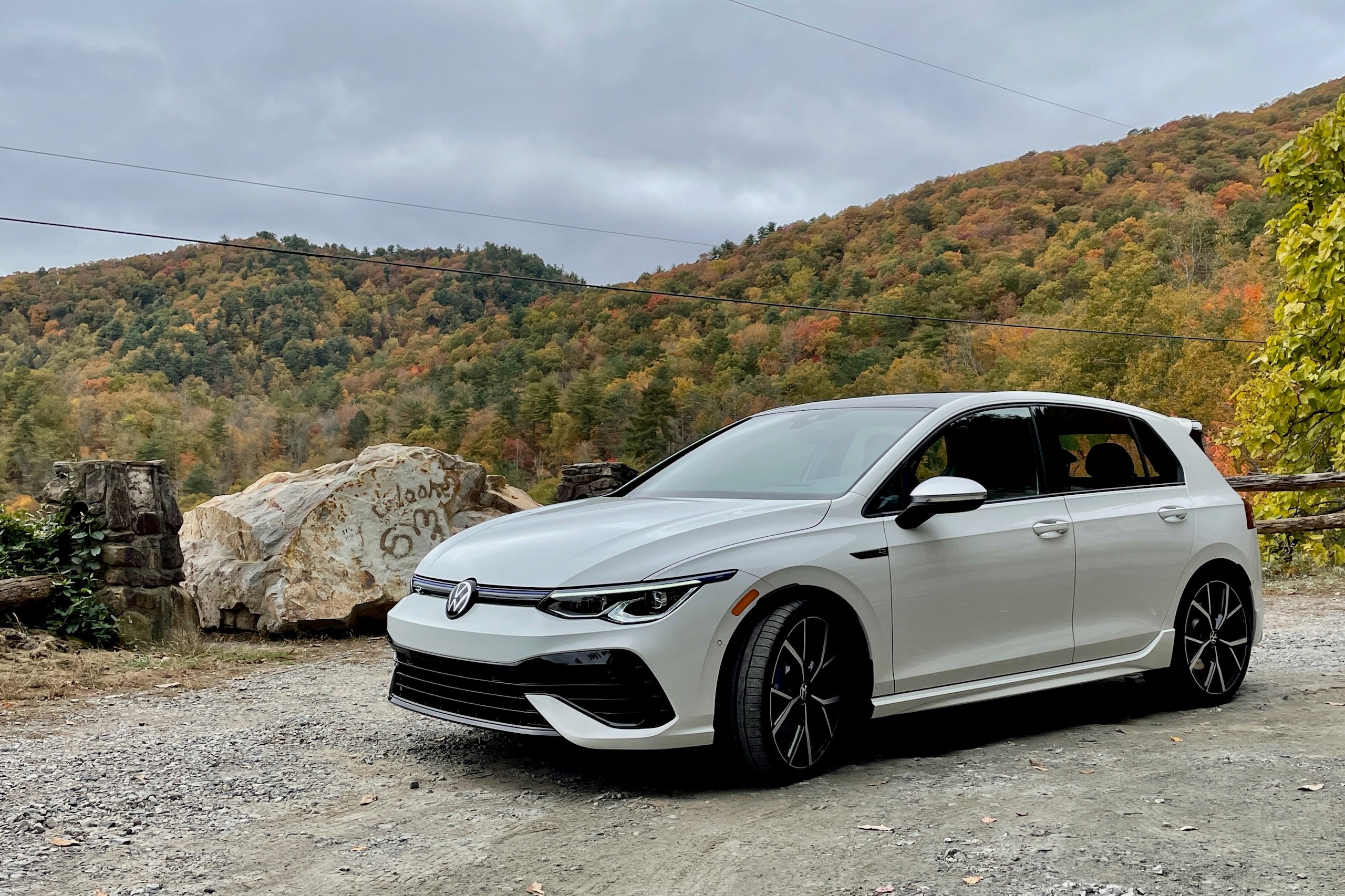 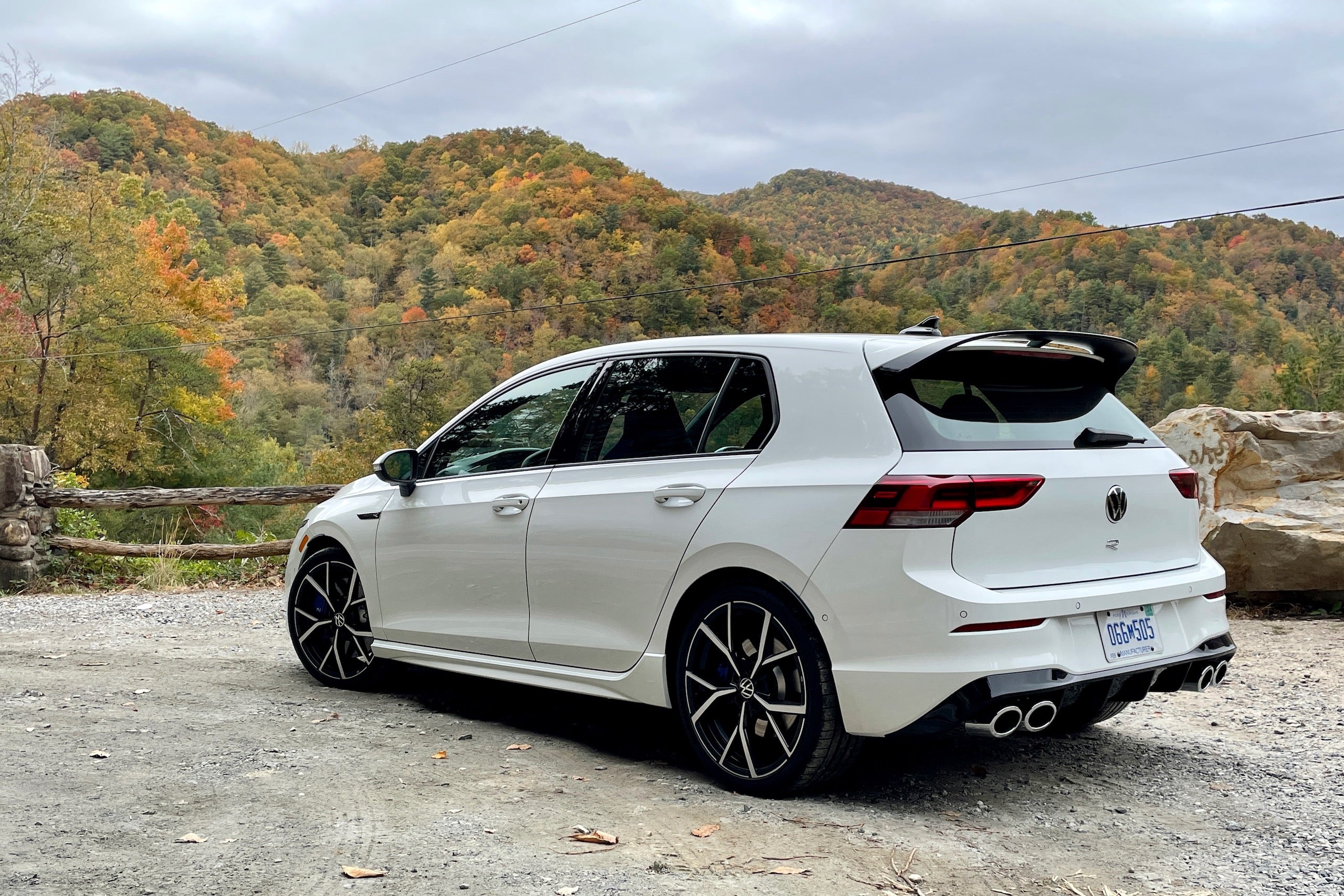 If you can get used to, or at least forgive, all of the touch-sensitive shenanigans—and that’s a huge ask on VW’s part—and focus on the drive, the new 2022 Volkswagen Golf GTI and Golf R are both very good cars.

Acceleration is brisk, handling is predictable, inputs are responded to quickly and smoothly, and they both make their drivers smile exactly as bona fide hot hatches should.

For better or worse, though, there also isn’t a single factor that truly stands out to make these cars especially memorable, such as the Civic Type R’s manic, weapons-grade turbo engine and maybe the best manual gearbox of all time. Or the Veloster N’s more hardcore, always-on personality and quirky three-door body.

The Golfs are too mature and well-engineered for any of that. They don’t exactly rub their hot hatchy-ness in your face very often but they’re also always fun enough to keep things from feeling sterile. On the other hand, they’re a great way to enjoy yourself and still look like a reasonably respectable adult, which is a harder task on the Civic, the Veloster, or even those four-cylinder AMGs.

It’s just a shame VW has chosen to mar one of the most well-rounded driving experiences money can buy with some very shoddy controls. I’d hope for a mid-cycle refresh with some actual buttons, but considering this is the interior setup for VW’s big-deal electric car lineup too, I’m not holding my breath. Maybe the next hot GTI mod will be a steering wheel from the seventh-generation car? 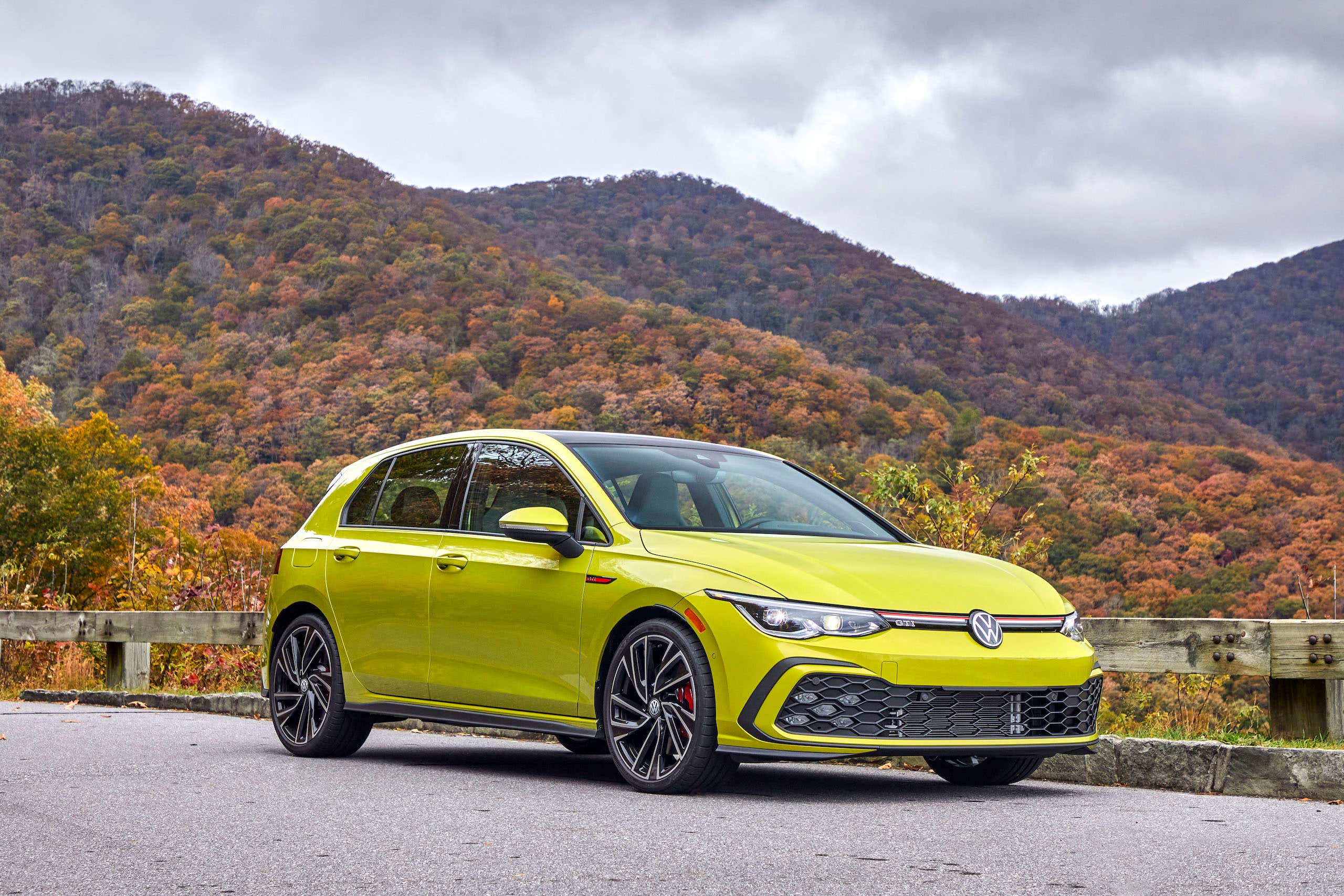 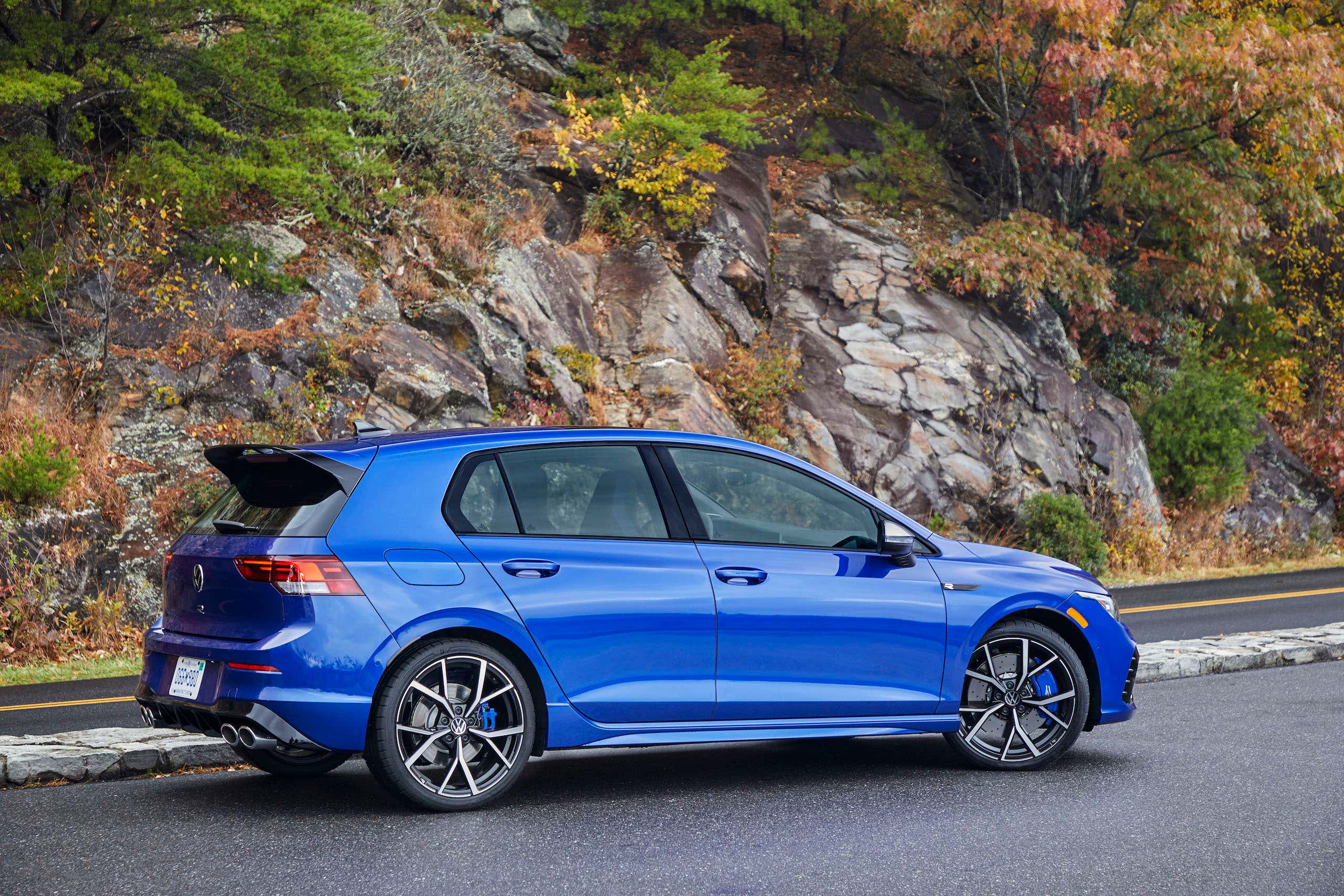 Got a question for the author about the new Golf GTI and Golf R? You can reach them here: [email protected]