Conflicting news floating around about Vistara being merged into Air India or not.

BHPian V.Narayan recently shared this with other enthusiasts.

It has been a year since Air India was taken over by the Tata’s. It would be most useful to all for passengers to share their views on whether quality of service has improved or not or worse gone down in this one year. Has Tata taking over added value to

Would love to hear your feedback out of general interest in all things aeronautical.

Conflicting news floating around about Vistara being merged into Air India or not. News says yes. Then Vistara CEO says no. Not unusual. A merger would make sense only if the regulator DGCA permits the main back office department – CAMO & Maintenance & line management to merge. In case of an earlier merger of Jet Airways with Sahara the DGCA in its infinite wisdom did not permit a merger of the back office thus resulting in duplication of costs, management and effort that contributed, but by no means were the main cause, to the demise of Jet Airways.

Here’s what BHPian vigsom had to say on the matter:

I flew Air India to Delhi after 3 years.

What I found positively different

What I liked – typical Air India

The aircraft was an A321 which arrived on time, left on time and landed at Delhi on time. After many years of flying only Indigo, I was pleasantly surprised to see red and yellow livery, business class seats, and the feeling of sinking into a soft cushioned seat in Economy Class. The Captain’s announcements were top class, and I also found the engine spool up, and take off roll way different and better executed.

Cabin crew were neatly turned out, but their safety demo and instructions were devoid of energy. Cabin service was quick – a jumbo cheese sandwich and a bottle of water was all we got. Overall, a good experience. Landing was very well executed – typical Air India style. The only grouse was that for the first time in my life, I took a bus at Terminal T3. However, it was a very short walk from the arrivals gate to the exit. Here are some shots View of the cabin – front Here’s what BHPian Turbanator had to say on the matter:

Time flies, it looks as if it was only a couple of months ago only. Given the unionised workforce and otherwise work culture, only Tata could have handled them (they too have now almost government-like culture )

The very smooth switchover, not many complaints by anyone, and the government is not losing month to month. They are not bothered if Tata earns or not and Tata, too, is a giant; if they keep on losing for a few more years, it won’t hurt them. I don’t know about the financials, but if I see the prices and availability on the overseas routes, they must be minting money. Delhi- Toronto/ Vancouver/ New York segments are always running full, with economy seats going more like business prices of 2020. War with Russia implied Air Canada and US carriers have to take longer routes/ stop the flights, and Air India could still go the shortest and price their tickets right against Air Canada and similar.

I booked Delhi- Vancouver segment in August but had to cancel it at the last hour. Booking and cancellations were easy as their new website is very fast and easy. Though the cancellation charges were very high as they charged cancellation on both onwards and returns, like what’s a norm on domestic but on International, if you cancel before the first flight, it’s just fixed on the ticket. The refund came next day itself.

I flew to Chennai last week and booked Delhi- Chennai due to a favourable time of departure, and my experience was positive. They took off before time and landed early too. The meals seemed nice. With an overall positive experience, I booked the return on Air India too.

They now start boarding almost immediately even as the Aircraft is being cleaned, more like IndiGo. A couple of people (looked government officers) complained about why they had to stand so much time in queue  The aircraft took off on time and landed almost on time as there was congestion in Delhi.

However, they still don’t take good care of the Aircraft, in fact, it’s a problem with all the airlines in India. If you travel on a 10-Year-old Lufthansa or Air Canada plane and a 2-Year-old Domestic plane, one can see the differences. VN can comment better on this aspect.

Here’s what BHPian shankar.balan had to say on the matter:

Air India and Vistara probably cannot merge ever, because of the SIA holding in Vistara. And you are absolutely right about the fact that for a merger of this kind to succeed and add value, one of the big ticket items is cost optimisation which means all the common services and back office services need to get consolidated.

I cannot for the life of me understand why we even have DGCA meddling in these things. Yes, certainly let them regulate all safety standards and other rules and regulations, but let them not meddle and interfere in the efficient running of a company, because none of those babus are qualified to do that!

Here’s what BHPian Akshay1234 had to say on the matter:

I had to fly to Delhi for a day, and Air India had a flight at 10am and that too an A321 where the emergency exit row has huge legroom. I thought I’d try to see if anything has changed (may have flown Air India 3 years ago and swore I’d never fly it again). I booked my ticket on their website, and even paid 1k extra for the seat.

Just before I left for the airport, I tried to check in online and got some kind of an error. I didn’t think too much into this and figured I’d just go to the counter at the airport.

And boy, was I in for a surprise when I got there. The counter told me my ticket was non existent . So I was taken to the ticketing office, who put their hands up, and gave me some email IDs to escalate too. They said had I been there 90 mins before the flight they may have been able to help me.

I then booked an Indigo flight which was to depart in 1.5 hours and carried on with my journey, a little later but a little wiser too. Never again.

Here’s what BHPian CrAzY dRiVer had to say on the matter:

Had my second worst in-cabin experience last month (the worst being a now discontinued airlines called Paramount, where the ac stopped working) with Air India. The aircraft in question was AI 801 from Delhi to Trivandrum on the 10th of September 2022.

The aircraft was very badly maintained and stinking, quite literally. During boarding, maintenance crew was seen walking around with air fresheners – but soon the captain apologized and said that they have received multiple complaints on this and have reported the same to the authorities, and in turn have been told to observe for one sector and report. He was quite apologetic.

Overall the aircraft looked very badly maintained otherwise as well. Was an old Airbus 321, I suspect transitioned from international to domestic service.

Will prefer Indigo and Vistara over Air India if the choice exists for that sector.

Here’s what BHPian boniver had to say on the matter:

My last AI flight was from DEL to CCU last Wednesday, and I was pleasantly surprised to fly in their 787 Dreamliner. I got quite a bit of legroom (which I’m deprived of, on other flights), and we had infotainment screens in front of us. Minor irritant: my screen’s remote control didn’t work, so although I saw everyone else on the flight enjoy various movies, I didn’t even get to scroll through the system to see what was on offer. I didn’t complain to the cabin crew either since I was working on my laptop, but there were several empty seats and I’m sure they would’ve accommodated me elsewhere had I wanted to use the infotainment. The flight took off and landed on time, and my suitcases arrived undamaged. The non-veg meal was fine too. All in all, worth the premium I paid for AI over other carriers. 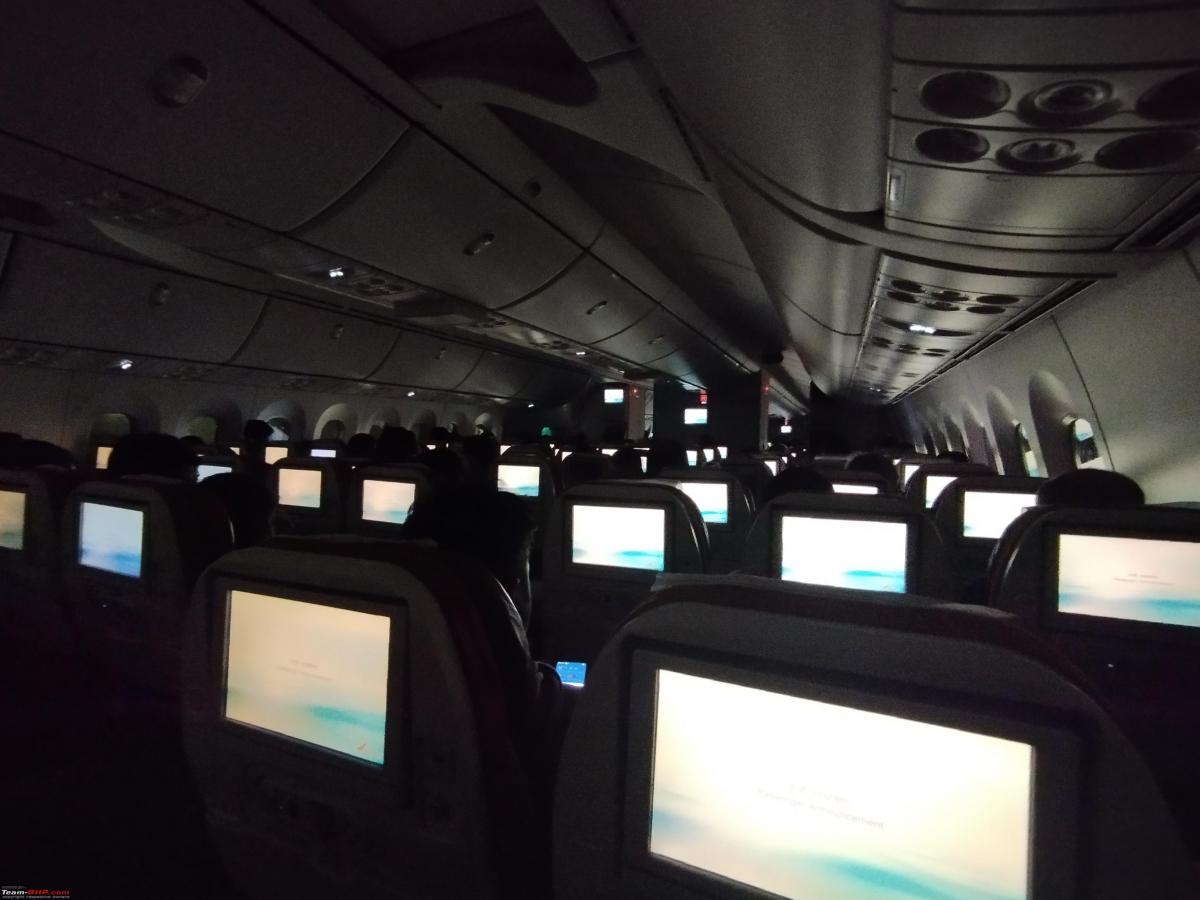