I managed to borrow jumper cables & a guy helped me with his car but for some reason, it didn’t work.

BHPian Jeroen recently shared this with other enthusiasts.

Yesterday evening I was driving home in the Jeep. I had just entered the motorway when I noticed the voltmeter had dropped to zero and red light check gauges had come on!

Problems with the instruments and lights on the instrument display is a well-known problem on these old Jeeps. I have had multiple failures. But I thought I had fixed it earlier when I cleaned the two connectors on the back of the instrument display. Since I had no problems. Also, when there are problems, lights and gauges usually don’t indicate anymore. The light “check gauges” and the non-working voltmeter was something I had not seen before.

I did not think too much of it. Car still drove fine. But after 20 minutes or so, I got tired of looking at this problem. So I pulled over at a petrol station to see what was wrong. Unfortunately, this is the one car that does not have any tools in it (yet!). First thing I did was checked the owner’s manual. Sure enough, this exact problem was mentioned. So it was likely to be more than just a loose display connector.

I tried to restart the engine, but it was immediately apparent the battery was almost dead!! Managed to borrow some jumper cables from somebody and he helped me with his car. But for some reason, it would not work. Also, the jumper cables got very warm very quickly. I double-checked I had them connected correctly, which they were.

So in the end I called my insurance roadside emergency number. A mechanic arrived within 35 minutes. He checked the battery with a multimeter, about 11.5V. So too low. He had one of these huge booster packs with him. Engine fired up immediately. Checked with the multimeter and it looked like the battery was charging too. Volts were back on and the “check gauges” light was off.

So I just drove home. This morning the Jeep still managed to start and I drove over to our local Euromaster, one of these quick fitters (tires, exhausts, batteries).

I told them what had happened and could they please do a proper battery test for capacity. Sure, they were just going to drive it into their workshop, but it would not start. Battery dead again. So they brought the battery tester outside and hooked it up to the Jeep’s battery. Within 10 seconds it had diagnosed a broken battery cell. Which we thought explained all the problems.

Unfortunately, they did not stock this type of battery, but a car parts store a few kilometres down the road did. The plus and minus are swapped compared to regular batteries. And the cables in the Jeep are too short to fit, so you have to have one of these batteries with swapped poles. 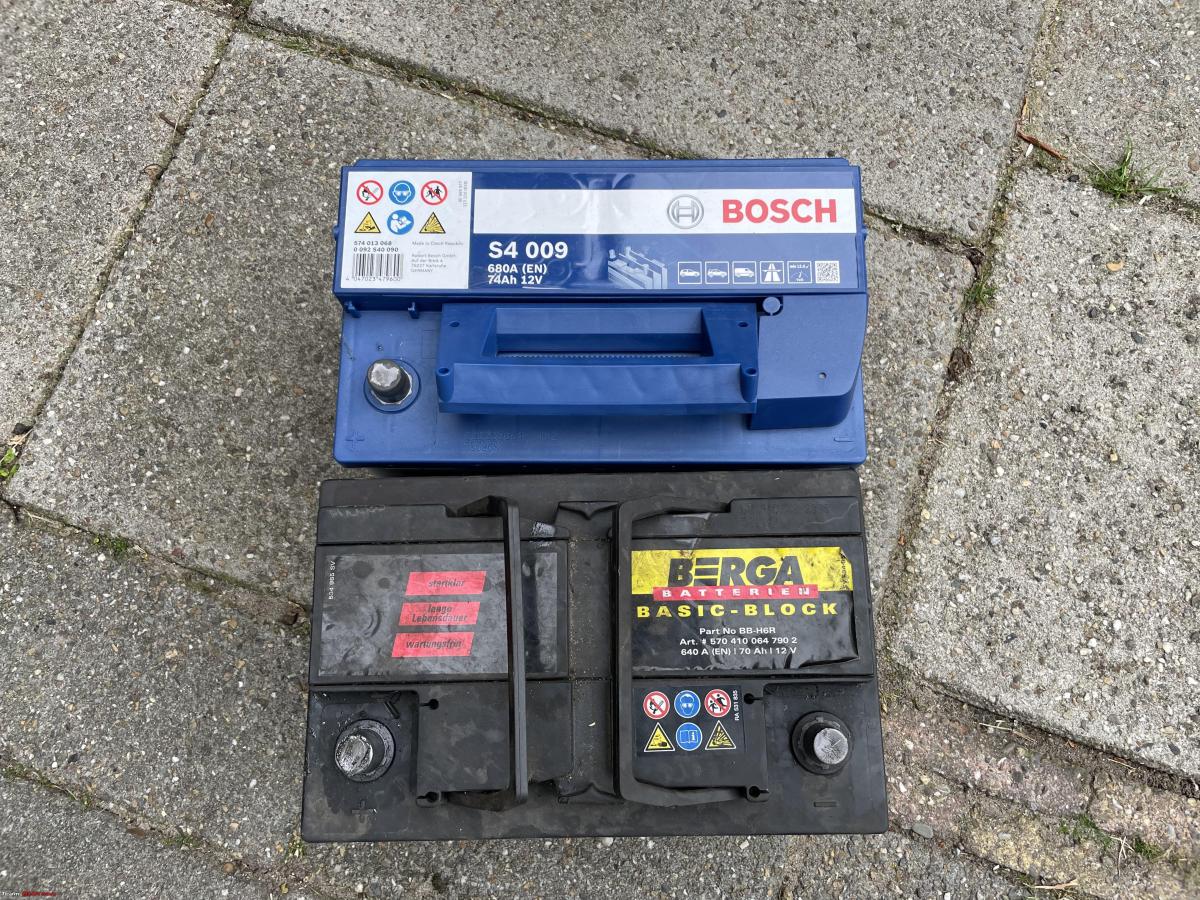 I checked the battery tray, typically you will find a lot of rust here. Not so much, well it’s plastic, there might be rust beneath it. But I did notice that the old battery had pinched some of the wires! Not broken yet, but I will keep an eye on it. New battery installed, the engine fired up right away, and all looks good. So I load up the Jeep with some of the old parts and used liquids to be disposed of and to return the old battery. You pay a Euro 10 deposit on your new battery, which will be returned when you hand in your old battery. Dumped all the old stuff at the Council tip and returned the old battery. I was driving home happy! I was just on the phone to spanner mate Peter to tell him what happened when I noticed the voltmeter had dropped again to zero and the blasted “Check Gauges” light had come on again!! I quickly drove home and checked the battery with my multimeter. Just 12.5V, so no charging happening!! So I checked the manuals, I also called my Jeep specialist Martin. The alternator on this Jeep has an external voltage regulator which is part of the PCM. Can’t replace the voltage regulator by itself. But with no charging at all, the most likely problem was the alternator and in particular the brushes.

So I decided to take the alternator off and take it from there. Shuffled my cars around and the Jeep back into its usual spattering position. Removing alternators can be a bit of a pain on some cars. It wasn’t to difficult on the Jeep. Still, it took me the better part of two hours. But then again, I am very slow these days.

Here you see the top bolt just right of the battery tray. 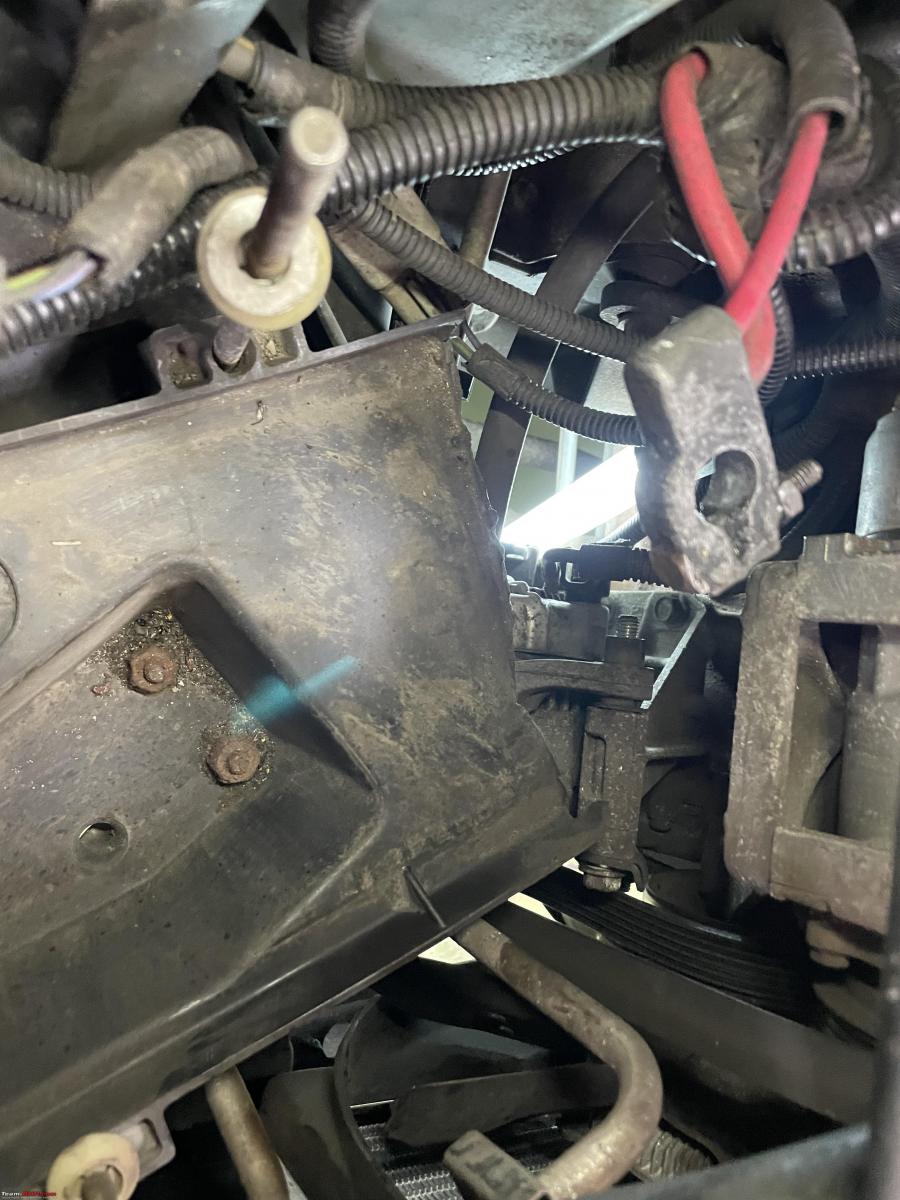 Here the alternator from below the engine. Once I had removed all the wiring and the various bolts (Had to take the battery out to get access to the bolts), it took me about 10-15 minutes to pry it out from underneath the engine and all the various hoses, tubings, brackets and so on. In a nearby little town, Leerdam, I knew a company that overhauls starters and alternators. So I took my alternator over to them. The guy opened it up right away and there was definitely a problem with the bushes. Almost none left and therefore not sufficient pressure on them anymore. He could overhaul it for me, but he double-checked for the price of a new one. And it was about the same price as the overhaul might have cost. So we ordered the new one, which should arrive tomorrow hopefully!!

I spend the afternoon cleaning up bolts and wires. I also took off the ground connection and cleaned them.

It is these two studs behind the loose wiring in from of them. Poor grounds can cause all sorts of problems, so better safe than sorry. Once everything was clean I applied di-electric grease liberally. The di-electric grease works better than just vaseline I find. Especially in this spot as it is likely to get a bit wet. We will see. Hopefully, the new alternator will arrive tomorrow!!