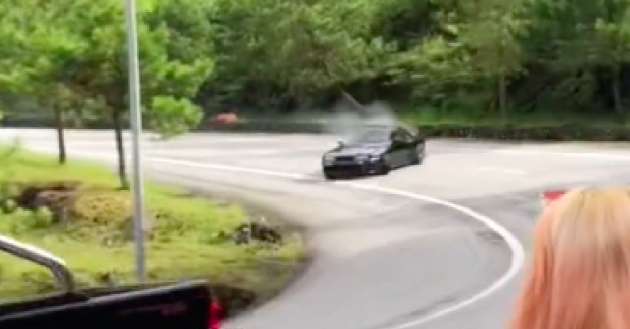 For motoring enthusiasts in the greater Klang Valley area, the hills of Genting Highlands in the neighbouring state of Pahang is home to some of the most accessible public roads that offer an extended ribbon of twisty tarmac for those who want to revel in the joys of basic vehicle control inputs of applying throttle, brakes and steering.

Attracting the spectrum of enthusiasts as it does, the twisty roads leading to and from the hillside tourist attraction inevitably includes motorists who aren’t reserved about overstepping the grip limits of their machines, as demonstrated by this TikTok footage of a modified car coming downhill from Genting Highlands, in a fashion that would be formally described as a “sustained loss of traction”. 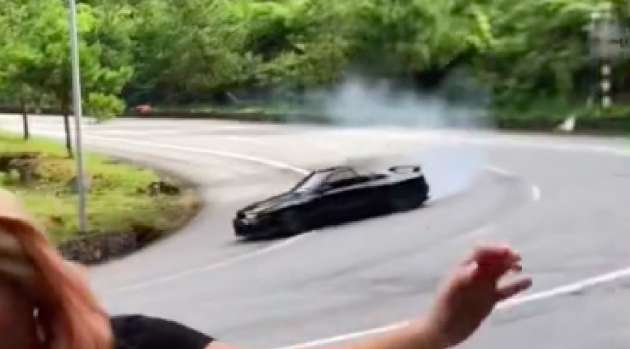 What might be the issue, one may ask, considering that the driver of this black modified car appeared to be in control throughout the vehicle’s drift through the right-hand turn; the driver even appeared to gather up the drift without too much corrective input, so ‘no harm, no foul’, right?

The thing is, this remains a public road, and regardless of the acreage on offer, corners on hillside routes with a larger hard shoulder tend to be where travellers will want to stop for pictures and take in the scenery.

When there are bystanders and stationary vehicles present, a vehicle driven particularly vigourously presents a much higher crash risk, and one that could well involve others who want nothing to do with a hard-charging vehicle that may or may not remain under control.

As it is in the video here, the black Toyota Hilux in the forergound appeared to pull over to the hard shoulder on the left, and rejoined the road after the drifting car had passed.

The law is clear on the matter – Section 43 in Act 333 of the Road Transport Act 1987 states that “A person who drives a motor vehicle on a road without due care and attention or without reasonable consideration for other persons using the road shall be guilty of an offence,” and can be punished with a fine of not less than RM4,000 and not more than RM10,000, and be liable for imprisonment for a term of not more than 12 months.

Beyond the letter of the law, common sense should also be in order when enthusiasts are thinking about exercising their vehicles in public; whether we like it or not, anything that attracts attention to any group of motoring enthusiasts reflects in some way on the enthusiast community at large, be they modified vehicles, exuberant driving or riding, or how one carries themselves around said vehicles.