Right now there are three lunar rovers from the U.S. parked on the moon. Someday soon they will be joined by several more. General Motors and Lockheed Martin have announced they “…are teaming up to develop the next generation of lunar vehicles to transport astronauts on the surface of the moon, fundamentally evolving and expanding humanity’s deep-space exploration footprint.”

Exactly what those lunar rovers will look like isn’t known yet, but if you poke around at NASA.gov you can get some ideas. The craft will be part of the enormous NASA-lead Artemis Project that seeks not only to return humans to the moon but to set up habitats and start mining operations.

To do that requires, among many other pieces of new technology, moon buggies. Officially they’re called lunar rovers. According to NASA, there will be two basic types of rover: a Lunar Terrain Vehicle, basically an open dune buggy that astronauts will sit in wearing pressurized space suits to ride around in; and the habitable mobility platform, essentially a big lunar motor home that will be pressurized and can be driven on long-duration trips away from base camp. 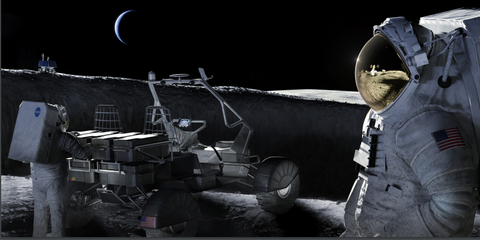 One thing to understand about yesterday’s announcement from Lockheed Martin and GM is that they don’t have a contract yet to build moon buggies. In fact, NASA’s RFP won’t even go out until sometime this fall, when both GM and Lockheed Martin will finally know the parameters for the rovers that NASA and its moon-centric Artemis Project will want. Last month Toyota and the Japanese Space Agency JAXA announced that they, too, would be working on a rover, though Toyota insisted it will use fuel-cell technology for its moon rover, which seems a little inefficient since there isn’t any hydrogen on the moon, while there is plenty of sunlight to recharge batteries.

Other entities will surely enter their own designs before NASA picks a winner. 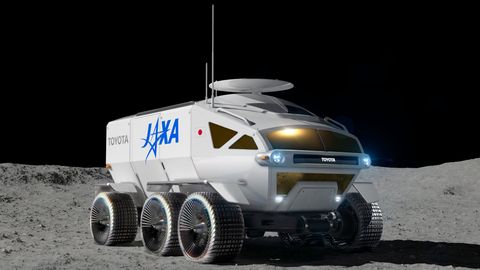 The whole thing is being done as part of the aforementioned Artemis Project, the big NASA-led program to return humans to the moon. Specifically, to the moon’s south pole, where there may be more interesting features more conducive to habitability. The plan is to send robots to the moon next year, send astronauts within four years, and establish a long-term presence on the lunar surface by the end of the decade (“…before this decade is out…”)

Initial crews will live in what will be called the Artemis Base Camp, the surface habitat that will accommodate four crew members. Artemis also calls for many other new designs, including space craft to get people to and from the lunar paradise.

But back to the rovers.

“Think of it as a pickup truck on the moon,” said Jeff Rider, vice president of growth and strategy at GM Defense.

Any speculation about what the rovers will look like, or what they’d be capable of, is just that, speculation, since NASA hasn’t listed the criteria for any rovers yet. All GM said was that any new moon buggies would go farther than the three that went up with Apollos 15-17—those traveled less than five miles each on the lunar surface.

“Our next-generation rovers will help NASA astronauts safely go farther and faster as they perform high-priority science on the lunar surface,” said GM CEO Mary Barra. “At GM, we are ‘all in’ on electric vehicles, and this opportunity is just another way that we are shaping the future.”

“GM has a proven history of supporting NASA and working with the space industry for over 50 years,” said Alan Wexler, senior vice president of innovation and growth at GM. “We’ve manufactured, tested, and integrated the inertial guidance systems for the entire Apollo moon program.”

GM made the wheels, suspension, and motors for the first lunar rovers, while Boeing did the chassis and assembly. Those first electric-powered lunar rovers had a GVWR of 1080 pounds and operated at temperatures nearly twice as hot as the Sahara and twice as cold as the Arctic. Expect the new rovers to be better in every way.

In the meantime, what can we gather from these design sketches released by NASA?

“What you see here is lots of potential applications,” said GM’s Rider. “When you see numerous headlights in the background there, that’s infering that we’re likely to see more than one vehicle, perhaps, right? There’s a lot of different missions that astronauts are going to have to perform and there will be lots of times where the vehicle will be operating autonomously… We see lots of different applications for mobility, and it’s what makes the mobility part of the Artemis program so important and such an exciting opportunity for us. In terms of where we are in the process, until we see the details of the request for proposal, these are really just a glimpse of where we see the opportunity playing out and what that operation might look like. But as we get closer to the RFP stage of this we’ll be able to offer a lot more details.”

In the meantime, prepare for liftoff, Buck Rogers!

Share your thoughts on lunar rovers and the Artemis Project in the comments below.