With an electric Range Rover on the way and EV conversions of older Land Rovers now available from multiple specialists, the future certainly looks quiet and electric. But what if you wanted to update an original Range Rover to return 25 mpg and get into Ultra Low Emissions Zones, along with other ULEVs?

That’s just what a new conversion program from Kingsley Cars will offer customers, as part of a bare metal restoration that will update the Range Rover on the inside.

The impetus for such a restoration is something that classic car owners in Europe will have to contend with en masse in the near future: the expansion of Ultra Low Emission Zones (ULEZ) zones in cities like London, and outright bans on older vehicles in other city centers. Kingsley Cars’ answer to this is the ULEZ-compliant Range Rover, featuring a choice of reengineered and fuel-injected 4.0-liter V8, good for 220 hp, or a 4.6-liter V8 good for 270 hp, paired with a ZF 4HP22 automatic gearbox and a rebuilt Borg Warner transfer box.

The result of the restoration—along with modern touches like an infotainment system, iPad integration, an upgraded suspension, and a seven-speaker Kingsley JL Audio 700w audio system—is fuel economy of up to 25 mpg, thanks to modern fuel injection and an efficient transmission. That’s an upgrade that’s sure to be appreciated by all UK residents, given current gas prices. Kingsley will also offer the option of an upgraded braking system with four-pot billet rear calipers and six-pot front calipers and larger discs, forged aluminum wheels, a backup camera, wireless smartphone charging, Apple CarPlay integration, and electric power steering among other modern details. 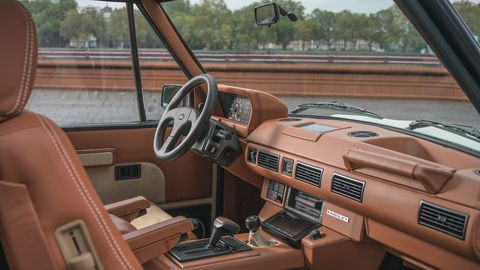 “Having been around classic Range Rovers for most of my life and after building a business around these vehicles, it was crucial for the company to come up with a way to not only continue to restore classic Range Rovers and Land Rovers but to enhance them for modern use,” says Damon Oorloff, Founder of Kingsley Cars. “And so, our classic Range Rover Reborn series was created. Designed for fans and enthusiasts of the classic model, it ensures that when driving in London, road users will not be hit by the ULEZ charge following its expansion to both the North and South Circular roads.”

The price? It starts at £125,000, which translates to about $170,000. But this does include a bare-metal restoration of an original Range Rover, after all, which is hardly inexpensive these days, now that there are several shops specializing in concours-grade restorations of old Rangies.

Kingsley Cars has restored over 400 Range Rover Classics by this point, in addition to updating several Ranger Rovers to Reborn spec with modern luxury features.

More importantly, the debut of these types of restorations points to a growing trend: Classic cars being converted to EV drivetrains or more efficient gasoline engines, to be permitted in certain cities. This is currently much more of a concern in Europe than in the US, as several cities are in the process of enacting or planning internal combustion bans in certain districts, but it’s clear this trend isn’t going away anytime soon. This could leave owners of classic vehicles with some difficult choices, depending on where they want to use them: sell, move to the countryside, or upgrade their rides. 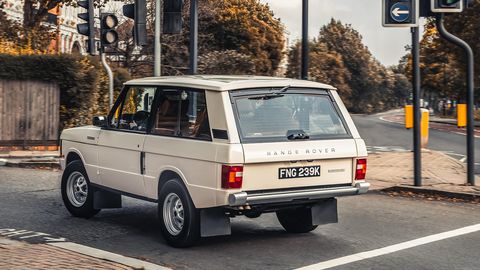 If this sounds like a niche industry at the moment, recall that Aston Martin itself is already offering EV conversions for its classic cars, before any particularly serious bans have been enacted.

“It’s so important for businesses like ours [Kingsley Cars] to keep classic cars on the roads, they are real head turners on the commute,” Oorloff adds. “As a team we want to establish our vehicles as the alternative to modern Range Rovers and SUVs, by offering our customers modern technology that fits seamlessly into their everyday lives and enhances the usability of our cars, while retaining the vintage look and charm that comes with owning a classic.”

If you have a classic car, would you opt to have it updated to modern emissions and fuel economy standards absent government mandates? Let us know in the comments below.