One thing that I enjoyed the most during this journey was the absolute power of the mHawk engine. Specially after driving the underpowered Linea Multijet for 10 years.

BHPian Sommos recently shared this with other enthusiasts.

Last time I did a long journey on my car was in May 2019 to Pune and December 2020 to Durgapur-Kolkata. Even after the purchase of the new car, I was engrossed in my day-to-day office duties and mundane activities of life. Finally one evening I decided that I need a break and made a plan to use the Durga Puja holidays to go out. Till now all vacations and outings were usually planned as per my son’s college vacations, but this time he was not available. Mentally, this was tough to digest for both of us, but this is the truth of life – eventually, as parents, we have to let him go his own path. So we started making plans for our first vacation without our son. The initial plan was to go to Varanasi – but our son wanted to visit that place too and hence Varanasi had to be kept aside for the future. The next place that came up on the list was Agra and we thought to bundle Bharatpur-Mathura-Vrindavan in the same trip.

The distance from Bhilai to Agra was 1080 km approximately and as per Google maps would take around 19-20 hours and the distance from Bhilai to Bharatpur, RJ was 1100 km and would take 20 hours. There was a lot of discussion between my wife and son on the topic of whether I can still cover this sort of distance at one go, since I have not traveled for three-four years and also had Covid in between. The result of all the discussion in the house somehow managed to dent my confidence level and on top of that I now have a brand new car (XUV700) and social media is abuzz with all sort of negative feedback about the car. Finally, it was planned that we would start as usual at midnight and try to cover the distance at one go, however, we will be flexible and comfortable throughout the journey and halt at Jhansi or Gwalior for the night, if so required. Meanwhile Orion was running well without any major issues (touchwood) and had a customary check-up at the MASS on 29-09-2022 and was ready for the journey.

On 01-10-2022 I had a good amount of sleep both before and after lunch. We had our dinner by 07:30 in the evening; again had some rest for three hours. By midnight, bags loaded on the car, fuel tank filled both Orion and myself was ready for the long journey ahead.

After locking the house and the gates, we started at 12:15 am and took NH53 up to Nagpur. It was Navratri time and there is a famous Maa Bamleshwari Temple in Dongargarh, where people visit throughout the day and night. There was heavy rush of such visitors on the road resulting in minor jams and this continued for some 60 km. Such jams were crossed from the left side muddy shoulders as the loaded trucks and smaller vehicles would not dare to venture there. Rest of the journey till Nagpur ORR was casual and we crossed Nagpur at 03:50 am and proceeded towards Seoni on NH44. A few km towards Seoni we saw a man just opening his tea stall and we stopped there to have tea and had some rest. To cut the story short, we crossed Seoni at around 06:00 am; Sagar at around 09:00 am, Jhansi at around 12:10 pm and reached Gwalior at around 01:15 pm; a distance of around 930 kms. We located “Cocina Highway Retreat”, a decent restaurant with clean toilets on NH44 and stopped for lunch. On the route we stopped for fuel at Lakhnadon and Jhansi and also for homemade breakfast at around 09:30 am somewhere after crossing Sagar. Gwalior to Bharatpur was another 3 hours journey and after having a relaxed lunch we started at 02:30 pm and reached Bharatpur around 05:30 pm after crossing Morena and Dholpur. There was heavy traffic from Gwalior to Agra on NH44 till we took a left turn on NH21 towards Bharatpur. We had a little trouble locating our hotel “Laxmi Vilas Palace” in Bharatpur but finally reached there with some help from the local traffic police. Thus we covered somewhere around 1130 km in a span of 17 hours and 30 minutes, including breaks.

The roads, throughout, were mostly in good condition inspite of the prolonged monsoon this year. Both NH53 and NH44 are four lane highways and maybe it is now time to extend both the highways to six lane, specially NH44. There are innumerable tolls on NH44 and I lost count of the number after some time. NH44 crosses over some of the prominent rivers of the country namely the holy Narmada, Betwa and Chambal (which is the boundary line between MP and UP and MP and RJ). We also crossed some rivers, the names of which I have never heard before, namely Kawari (near Morena), Asan river (near Chonda/ Chondha), Sindh river, Pahuj river, Dhasan river and Shahzad river. We could also see many lakes / dams on both sides of the NH and we stopped for a while at one such dam called the Govind Sagar Dam on Shahzad River just before Lalitpur. The road crosses over another dam called Shahzad reservoir, which actually is huge in size, after crossing Lalitpur.

This was the first long highway drive with “Orion” and I had some doubts about the capabilities of the car or how it would behave. The bonding between the car and myself was yet to be cemented and was still at a blooming stage. I have mentioned in my initial post that I sorely miss the steering feedback of the Linea. This was an opportunity to push the XUV700 to its limits and verify it’s capabilities. I will list my observations one by one:

The first 60 km the roads were crowded and it was just coasting around, but after that, I slowly but steadily started accelerating from 70 till 90-95. Since it was dark all around I decided to keep the speed below 100. The first thing that I noticed was that the throw of the lights was adequate. The high beam plus high beam assist (extra lights that come up as the speed crosses 80 kmph) lit up the road ahead up to a sufficient distance to give you the confidence to drive at triple digit speed.This can be viewed from the videos attached with the post. Also the impact of the high bean assist can be clearly seen.

The steering wheel, which is feather touch in normal city driving, does weigh up in the highway drive as the speed increases. At 90-95 kmph speed it does weigh-up maybe around 70-75% of the Linea’s HPS but the steering feedback was still absent. This is no HPS and it would be foolish to expect the precision feedback from this steering wheel. The 18 inch tyres and the FSD do a beautiful job of keeping such a heavy and high GC vehicle stable by controlling the body roll and the car glides over the broken patches of the road.

At the same time, I must say that the car maintains its composure even at high speeds and cutting across lanes to overtake the trucks was easy. Only during some sharp turns on the elevated highway over Pench Jungle reserve did I feel slightly nervous. In the daylight the car was driven mostly at 115-120 kmph and it continued to maintain it’s composure.

Tested the ADAS and the ACC with stop and go function during daytime and loved the feature. Pressing the brake pedal overrides the ACC but there is no need to actually use the brake manually. The ACC was set at 100 kmph and the car was driving itself maintaining the lane. When a vehicle was sensed ahead, the car would slow down to adjust with the speed of the vehicle ahead and maintaining a safe distance between the two cars/ vehicles. The driver has to engage the indicator and change lane and the car would accelerate on its own till it attains the set speed. I used this feature for more than 100 km continuously but then I started feeling sleepy and I disengaged the feature.

I tried the ACC again on the Yamuna Expressway, on our way to Mathura, and after some time I started feeling sleepy. I did not try to engage the ACC on the return journey from Agra.

One thing that I enjoyed the most during this journey was the absolute power of the mHawk engine. Specially after driving the underpowered Linea Multijet for 10 years, I enjoyed the power available on tap. This is my first automatic and I clearly do not understand which gear the car is in; I only make a guess from the speed of the car. The Aisin auto box is perfectly in sync with the engine and the car responds even to slight pressure on the accelerator. But when the car is at moderate speed of around 50 kmph and the accelerator is pressed hard for a quick overtake, there is a slight lag of one or two seconds before the car starts to accelerate. The XUV can smoothly drive around at 120 kmph all day – I prefer this speed because beyond 120 kmph, the buzzer rings constantly and causes irritation. First cup of tea for the day: 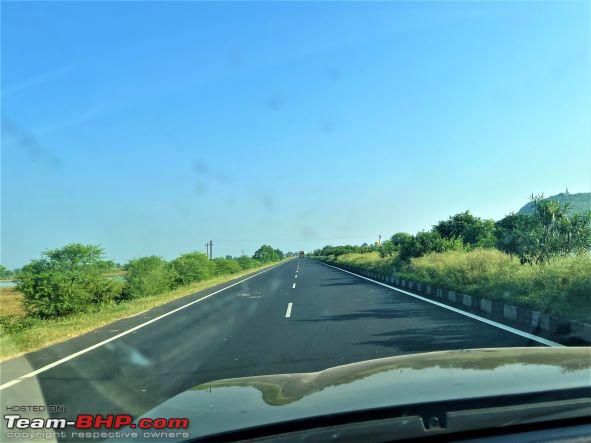 Breakfast under a shed: After a lot of dilemma over three months I finally decided to fix the Stainless Steel rear guard. Though I know that this may not be the right thing to do, finally heart won over the mind and this was done from the showroom just three days before the journey.

Orion also got the AWD batch and magnetic window shades on all seven glasses before the journey.

I forgot to start the trip meter from home and did the reset just after crossing Nagpur. So please add another 230 km distance and 3.5 hours journey time: