The interior of the one-off custom road-going version of the 1968 Charger Dom drove in the ninth installment of the Fast & Furious franchise is fairly raw, so there is not much between the driver and the engine. It’s extremely fast and it is absolutely thunderous.

SpeedKore is known for starting with B-body muscle cars and modifying the stuffing out of them, but the F9-inspired Hellacious is different. The custom shop packed a 6.2L Hellcat Hemi V-8 right behind the seats, making for a visceral driving experience that surely rocks your whole body and jostles your brain. 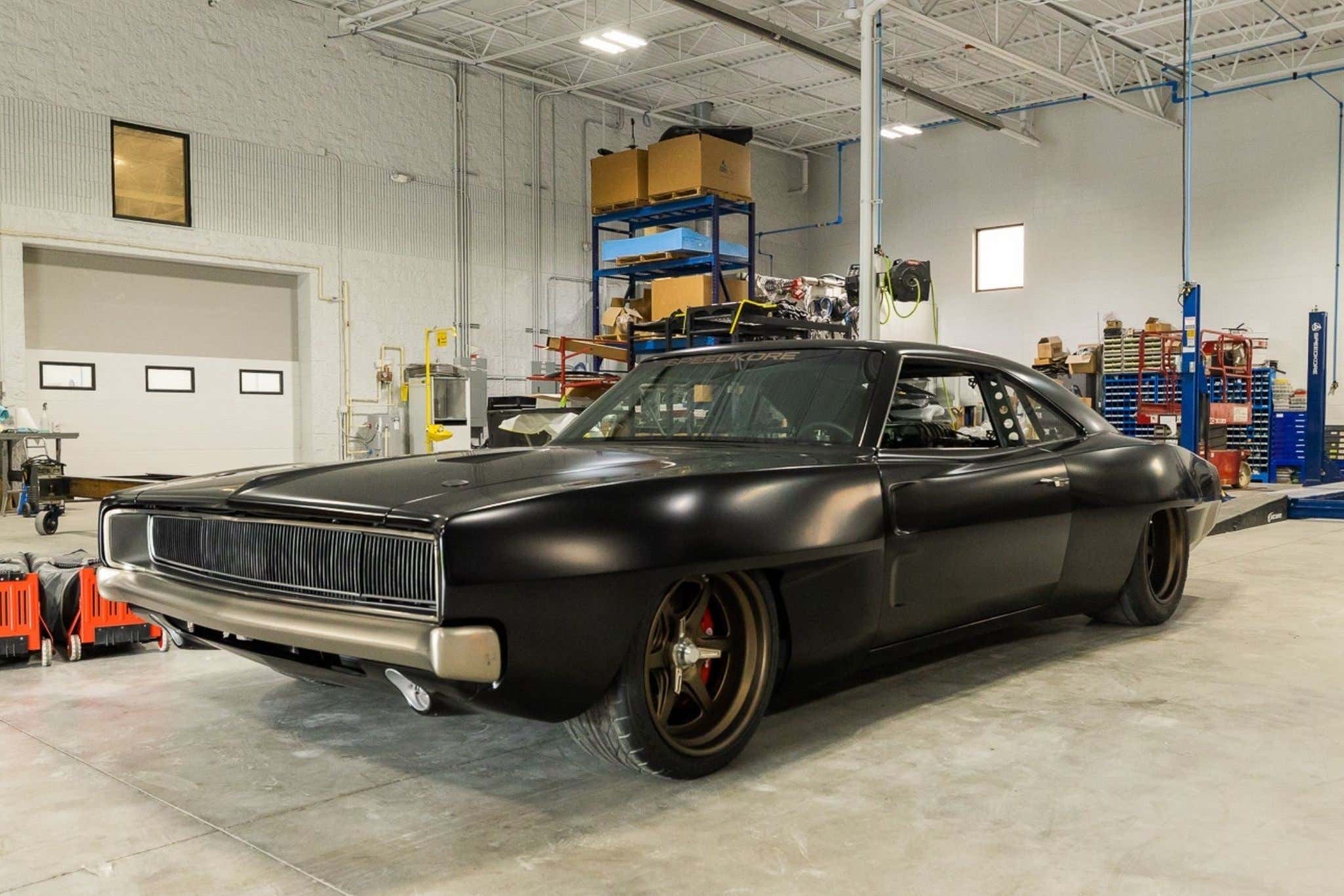 I had a chance to interview SpeedKore master designer Lyle Brummer and engineer Tom Porter about the build, and they revealed what it’s really like to get behind the wheel of this monster.

“It’s so loud!” says Porter. “It’s awe-inspiring. The sheer sound of having a 707-horsepower engine right next to you reminds me of vintage racing. It hearkens back to that raw era of early McLarens. All of your senses are on high alert when you’re driving it.”

Brummer agrees: “This is a manual car with a drift brake. Because the engine is right behind you, you’re going to want to put in earplugs.” 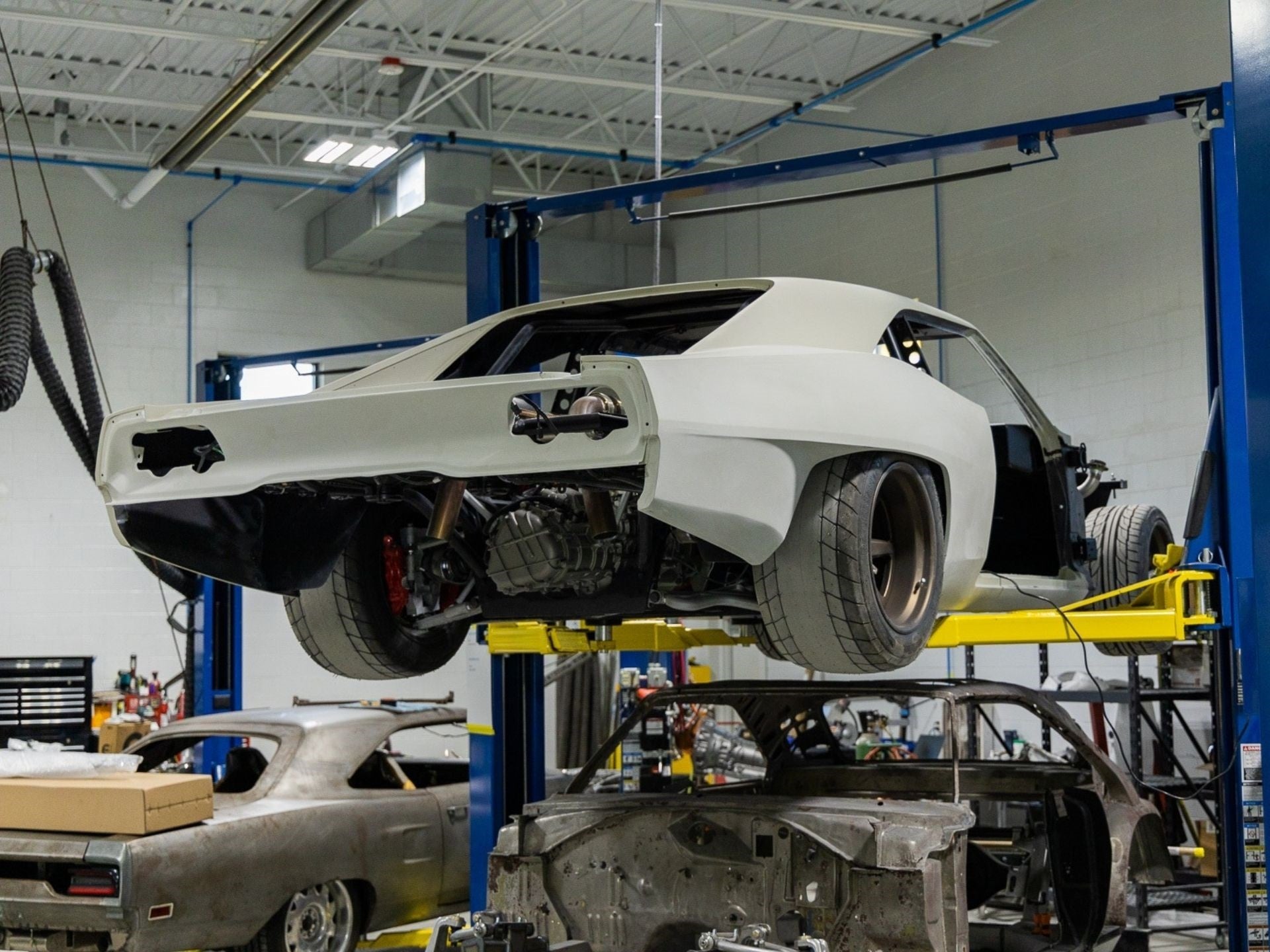 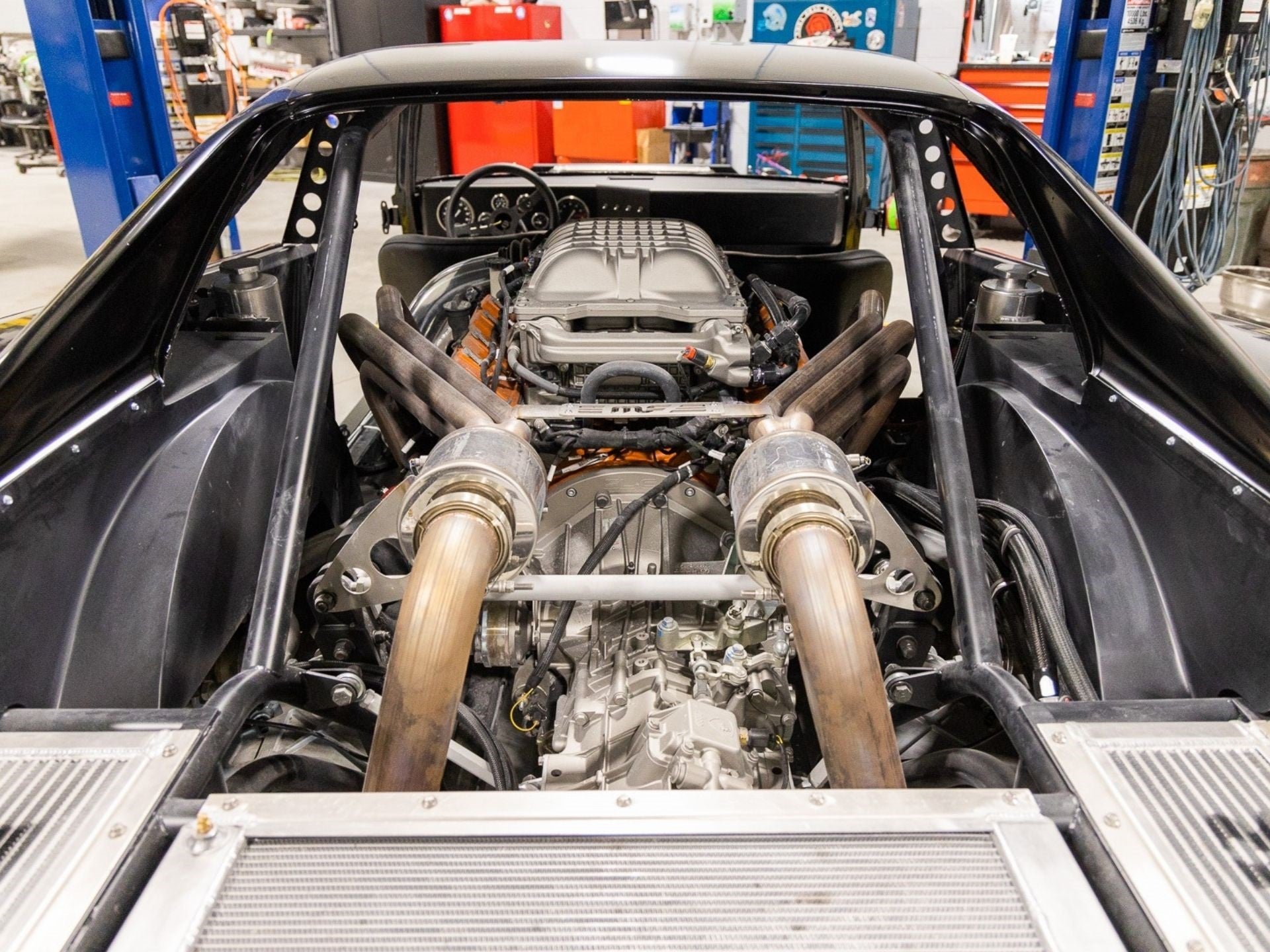 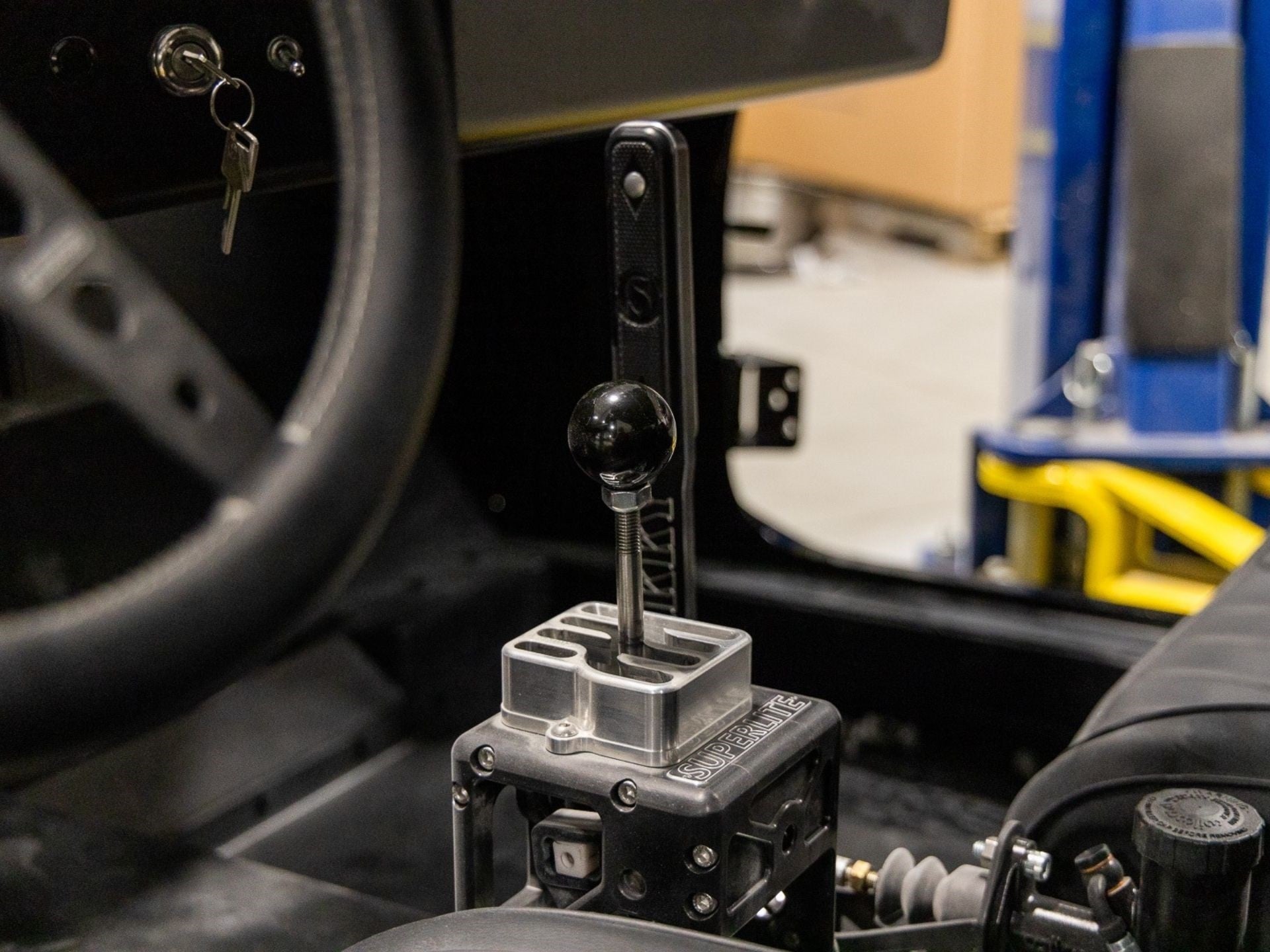 Technically, Hellacious is a 1968 Dodge Charger, but with carbon fiber body panels, an aluminum space frame, six-piston Brembo brakes in the front and four-piston calipers in the rear, four-wheel independent suspension, a six-speed Lamborghini Graziano transaxle, and, of course, the namesake mid-mounted Hellcat engine. This is not your dad’s Dodge.

The shop worked with renowned muscle car designer and stylist Sean Smith to lay out the road map from a visual and mechanical standpoint, then they use a boatload of technology, including 3D scanning and printing, Brummer says.

“We go through iterations of concepts then we start building in foam and clay,” Brummer says. “We spray it up so see how it might look, then we take some pictures, make revisions, and make more changes. This is a very iterative process.”

Typically, that process takes about two years. In this case, the build had to be completed in less than a year. Considering the sheer amount of carbon fiber in this Charger, that is a Herculean feat. 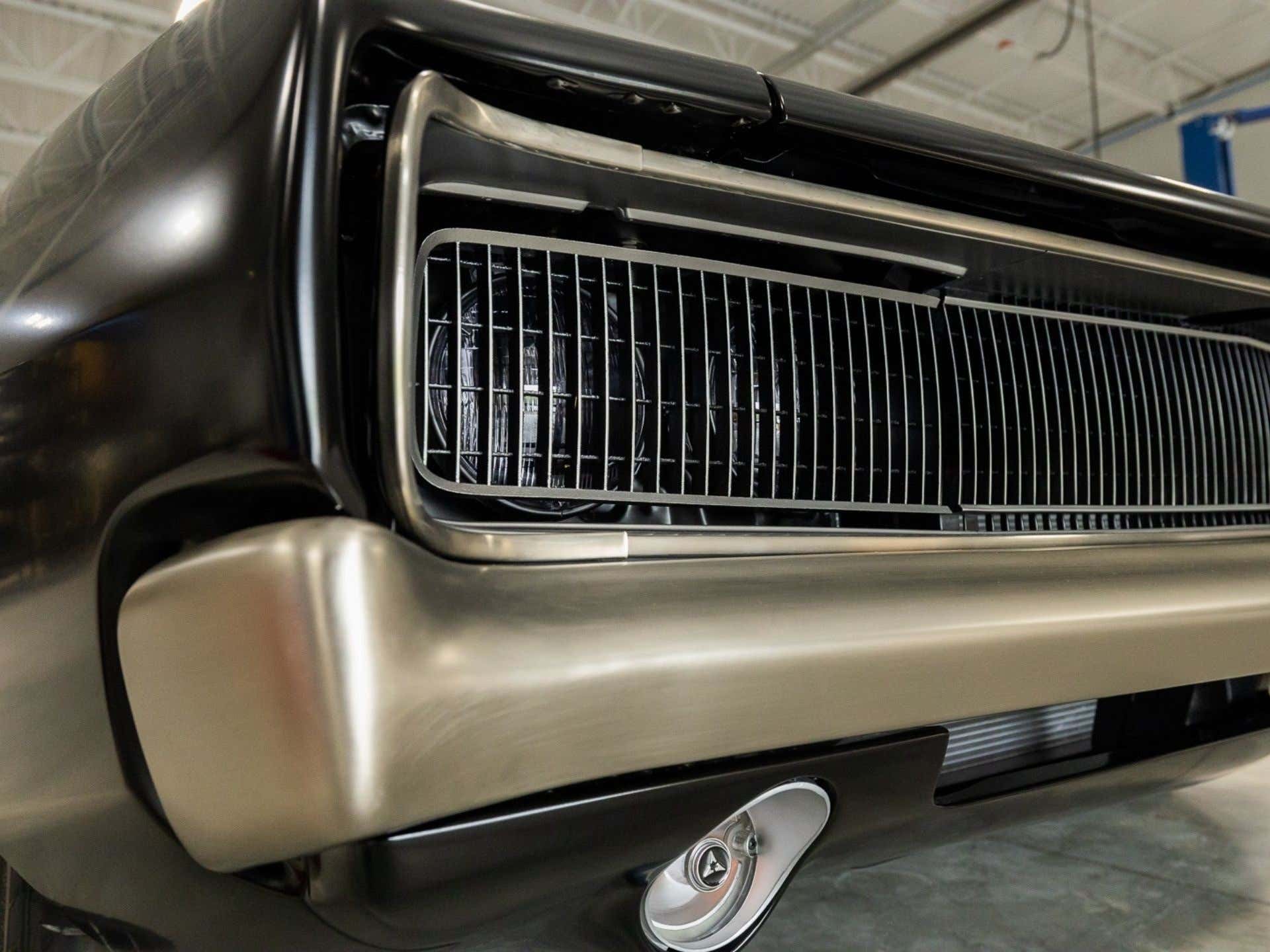 If you’ve ever installed wallpaper, you’ll understand the challenge of matching up lines and seams. Take that intensity and multiply it with a material made from spun crystalline filaments of carbon in a very expensive and time-consuming process; that will give you an idea of the difficulty of cutting and laying carbon fiber on a vehicle.

To start, the team scanned an original Charger. For every eight-inch triangle, a stunning 12 to 13 million data points are generated. From there, it’s clearer how much material they need to cut. Then they flatten the data and export it to a Zund digital knife machine, which vacuums the material down and cuts that flat shape of carbon off the roll.

SpeedKore uses prepreg (carbon material impregnated with a polymer matrix) carbon fiber purchased in 50 to 100-yard rolls. The carbon fiber is laid out and the components digitally oriented to ensure that nothing is wasted. It’s like making very expensive gingerbread cookies from a roll of dough, except that you can’t re-roll the scraps. That part alone explains why the cost of a custom vehicle from SpeedKore, according to Brummer, runs anywhere from $500,000 to $750,000. Who needs a house when you can have a one-of-a-kind car? 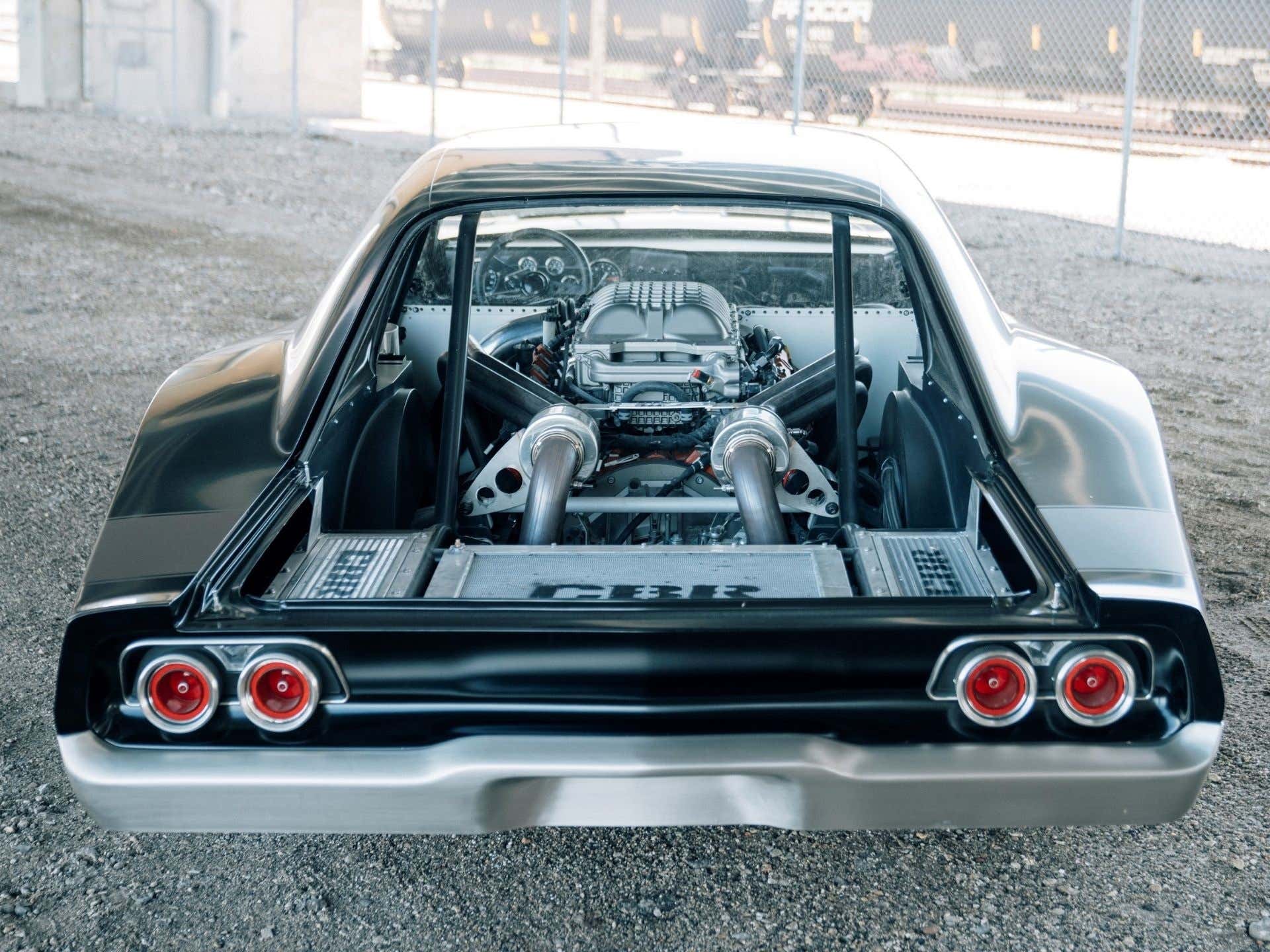 “Carbon fiber is very expensive, and you want to make sure you get it right,” Porter says. “Measure twice, cut once. It’s similar to using leather hides.”

Perched on top of the lightweight body is a transparent hatch that shows off the Hellcat.

“As a team, the glass rear hatch was something we really liked,” says Porter. “It still has the great DNA that B-body cars have but with the Lexan enclosure; it’s pretty iconic. If you want to access the motor and driveline, you have to remove the hatch (it’s not hinged) and it’s much easier for one person to remove it if it’s plexi instead of glass.”

All of that work netted an unforgettable result, much like Dominic Toretto himself. Keep your eyes open for any Hellacious sightings; it recently made an appearance at a minor league baseball game in Wisconsin and could roar into a town near you.