An imported Land Rover Defender a little rough around the edges won’t surprise many on U.S. streets these days, thanks to nothing short of a second British Invasion that has taken place for the past two decades aimed at finding old Defenders in the British countryside and herding them on to RoRo ships bound for Mu Mu Land.

Indeed, the Defender Industrial Complex has allowed thousands of Defenders to emigrate to the U.S. and Canada, thanks to the 25-year-rule. As a result, the numbers of old Series Land Rovers and later Defenders have swelled here in recent years, with a cottage industry of Land Rover importers and outfitters supporting them.

But in a few weeks a special Defender is going up for auction, one with a more exciting history than having been on a farm in the Midlands its entire life.

In early December Bonhams Auctions will offer a 1992 Defender that early in life was a support vehicle in the legendary Camel Trophy. 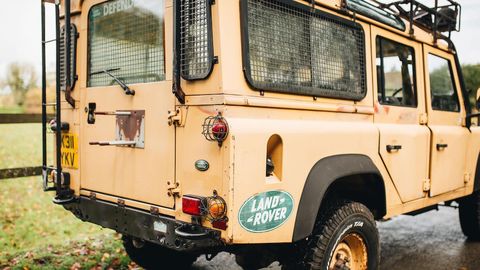 An event that ran for 20 years, from 1980 till 2000, the Camel Trophy brought together teams from many different countries to the least accessible and least paved places on Earth, in a competition testing men and metal. Jeeps ran in the event’s first year, but from 1981 onward they were different models of Land Rovers and Range Rovers. The automaker specially prepared them for the event with lots of rugged off-road gear including roll cages, additional fuel tanks, snorkels, winches and just about every other off-road tool you can imagine. In addition to the team vehicles Land Rover prepped support vehicles for each year’s event, and this Defender is said to be one.

This particular 1992 Defender includes a snorkel, winch, two fuel tanks, an external-to-internal roll cage, two batteries and a a Brownchurch roof rack. The SUV was prepared by Land Rover’s Special Project Division, known as Special Vehicle Operations (SVO) these days. Equipped with a 2.5-liter diesel engine, the Defender is now reportedly on its third gearbox, having been to India and back three times according to the auction house. The SUV is now said to run and drive well with 110,200 miles on the odometer, but obviously includes a variety of imperfections inside and out. Most graphics it wore during its support vehicle role are gone now, but there are traces of them around the vehicle. Those who know Land Rover history will recognize its faded sand color and will figure out what it had been up to early on in its life. 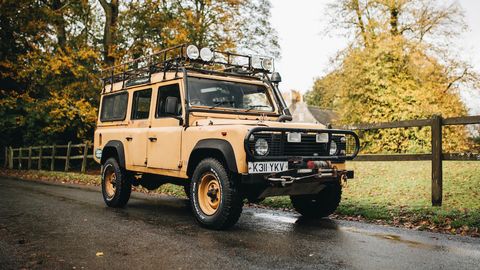 The auction house is silent regarding its mechanical and cosmetic needs, even though the listing includes a seller’s assessment. Perhaps much about its condition can be inferred through the photos in the listing.

Bonhams estimates this Defender to bring between £16,000 and £22,000, or $21,000 and $29,000. If it lands anywhere in the estimate range (and makes its way stateside) the Camel Trophy history could perhaps be said to be thrown in for a bargain, because freshly-imported vintage Defenders from this era trade in this general range at the moment.

Needless to say, the Camel Trophy is a big deal in vintage Land Rover circles. Just about all vehicles with any connection to the event are sought after by enthusiasts and collectors. The Camel Trophy was after all among the last, big expedition-type off-road events of the past century with plenty of danger involved for the teams. 1989 alone saw more than a million applicants try to join just over two dozen participating vehicle teams. While the Camel Trophy might have faded a bit from popular memory, items from the event have become collectibles. The auction house doesn’t mention whether this vehicle comes with any period photos from the Camel Trophy or any kind of history file from its time in Land Rover service. 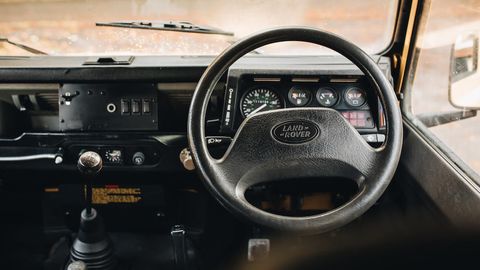 The question with this example is whether to preserve it as is and tend to any mechanical needs, or restore at least some of the graphics and other equipment.

It’s a shame most of the graphics were removed as it settled into a civilian life with three owners, but even without the graphics Land Rover enthusiasts might recognize what it is. The important thing is it doesn’t appear to have been been repainted or had the major off-road equipment removed, diluting some originality. If its new owner chooses to advertise its participation a little more heavily, it can be fitted with some reproduction vinyl decals.

Sign up for comments and let us know what you think about Defender mania still gripping this country.