At one point nearly a yearly franchise, the people behind Forza have not blessed us with a new game since Forza Horizon 4 way back in 2018, presumably taking those last handful of years to transition towards the new generation of Xbox Series X and Series S consoles. But the Forza drought is almost over because Forza Horizon 5, the franchise’s first entry into this console generation, is set to launch on November 9. And after my brief hands-on encounter, I can already tell that Forza Horizon 5 is set to continue the series’ ongoing legacy as what is arguably the greatest arcade racing series of all time.

Because getting to drive cool, new cars before everybody else in real life just didn’t feel like enough privilege, I decided to secure myself an early taste at some of the virtual ones featured in FH5 from the comfort of my own home. (For an idea of just how long ago 2018 was, the preview event for Forza Horizon 4 was in-person. Not a mask was in sight; it was just a bunch of people gathering in one place, playing video games, freely mingling less than six feet apart, living in the moment. What a time to have been alive.)

In the spirit of transparency, the media preview granted to me allowed for exploration of the full map—we’re in Mexico this time around, by the way—but only contained about the first hour or so of semi-structured gameplay. So the following impressions are initial.

If you’re unfamiliar, the Forza Horizon series is an open-world offshoot of Microsoft’s more serious and circuit-based Forza Motorsport franchise of racing games. Set against the premise of the “Horizon” car-and-music festival (essentially Gumball 3000 meets Coachella), Forza Horizon takes Motorsport’s car assets and physics engine, simplifies the latter for a more forgiving, arcade-feel, and throws it all into a gorgeously rendered open world. 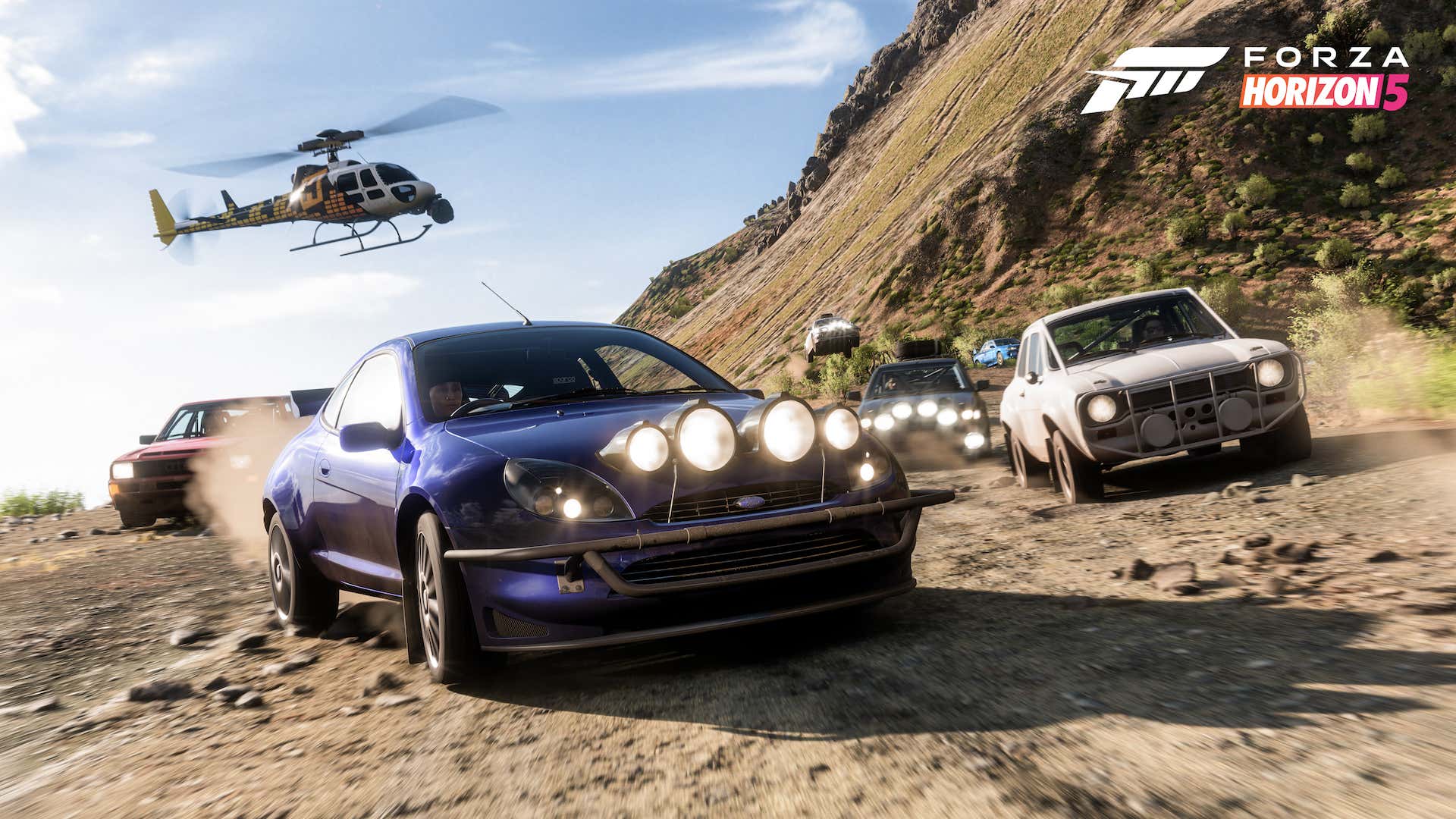 How gorgeous? During lockdown, one player put together a 78-page mock issue of Evo magazine using nothing but Horizon 4 screenshots. Horizon 5 only promises an even more beautiful environment.

Moving away from that game’s conspicuously un-rainy interpretation of Britain, this fifth Horizon Fest takes place under the aforementioned and (mostly) sunny virtual skies of Mexico. Just like previous installments did for the UK, Australia, southern Europe, and Colorado, the environment has been meticulously recreated to reflect Mexico IRL. According to developers, the terrain, infrastructure, and even sky have been replicated in such a way that someone who actually lives in Mexico could play the game and feel right at home.

Making a return from FH4 are changing seasons, which sees the entire map switch through autumn, winter, spring, and summer over the course of a month (changes happen weekly for all players). On top of the obvious visual changes, each season also alters how certain surfaces are like to drive on and has been crafted to reflect what an entire year’s worth of weather actually entails in Mexico. So, no, don’t expect a bunch of snow during winter. 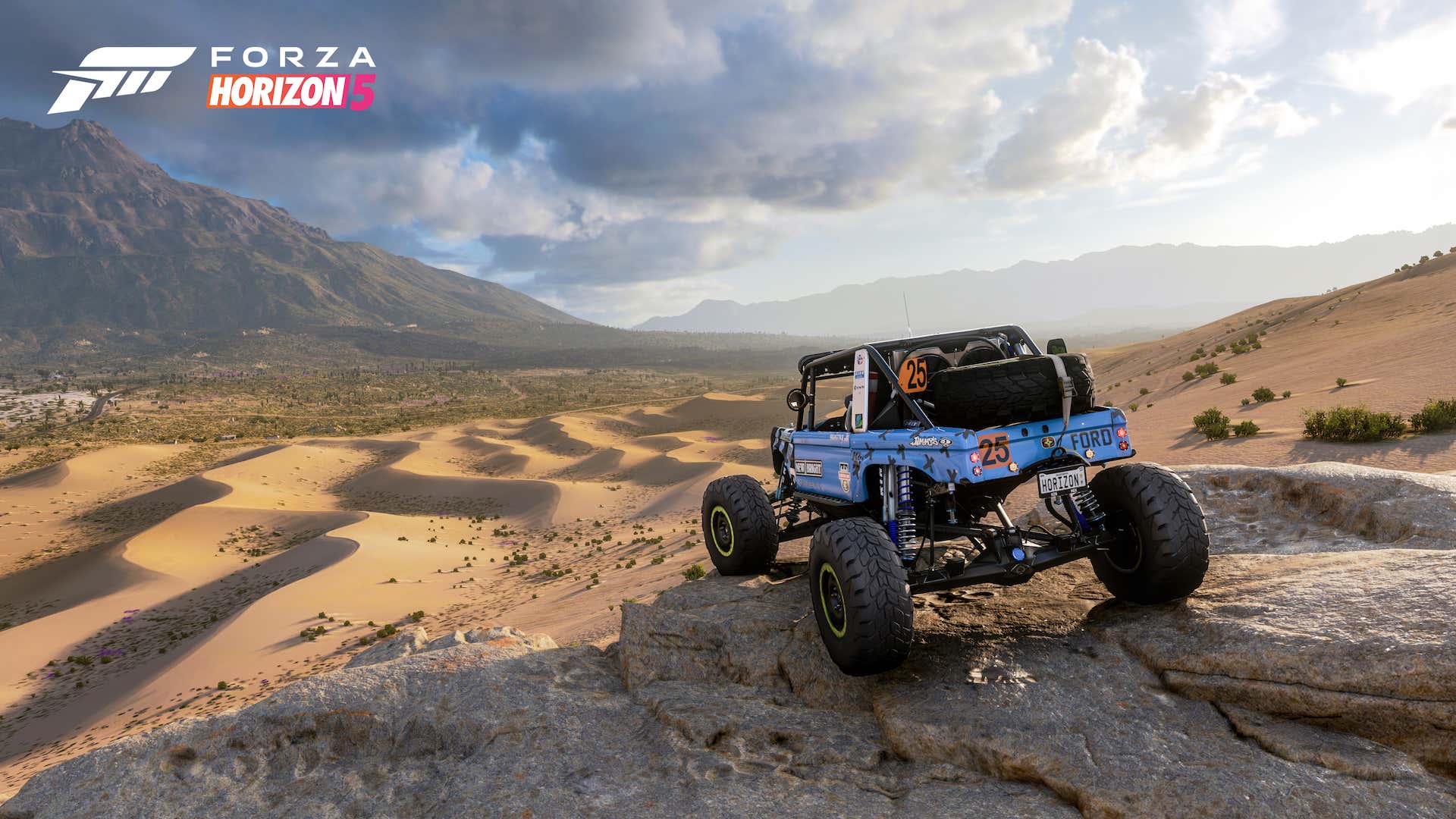 Instead, the Horizon team has recreated stuff like torrential rain and wild dust storms. Within the first five minutes, in fact, you are thrown into the eye of one of these dust storms in a widebody C8 Corvette… right after jumping your way down an active volcano in a Ford Bronco Badlands that, like the ‘Vette, was dropped out of a cargo plane Furious 7-style.

Shortly after, prepare to get literal goosebumps as this game’s cover car, the Mercedes-AMG One, is not-so-gently loaded off of that same cargo plane and wastes no time in absolutely tearing ass down a Baja California highway. (No parachute entrance for the $3 million AMG hypercar, though. Even the Horizon Festival’s insurance policy has its limits, I guess.)

Is That as Fun as It Seems?

In a word: Yeah. The actual driving and gameplay feel pretty much the same as before, which is to say quite fantastic. There’s a great sense of speed and controllability; the cars feel distinct even playing with a controller rather than an expensive wheel-and-pedal setup, and different terrain types require different approaches to traverse successfully.

It’s also extremely approachable for new and/or less-than-coordinated players. As always, the game’s difficulty is immensely customizable. Not only can you adjust how fierce your computer-based opponents are, but you can also toggle traction and stability controls, ABS, assisted-braking, and on-road driving lines. As an incentive for players to challenge themselves, the more talented the AI and the fewer assists you use, the bigger the post-event payouts will be. However, the gulf in reward is not so great such that newbies or butterfingers would feel penalized for playing on easy-peasy mode. Go ahead and make it as forgiving or demanding as you want. The game just wants you to have fun.

And Forza Horizon 5 is set to be an absolute boatload of fun. At launch, the game will ship with at least 440 cars with more to come in the future, ranging from racing game mainstays like Lambos, Mustangs, and Subaru WRXs to trophy trucks, the all-terrain Mercedes Unimog, Ford’s Crown Victoria Police Interceptor, and the M12S Warthog from Halo. Whatever stripe of car enthusiasm you happen to identify with, Horizon 5 probably has something up your alley. Toyota and Lexus, by the way, are back in full force right out of the gate—this time with the fifth-gen Supra, in fact, showing up early as one of the cars you can choose to explore the map with after completing those epic initial drives in the Bronco, C8, Safari 911, and AMG One. 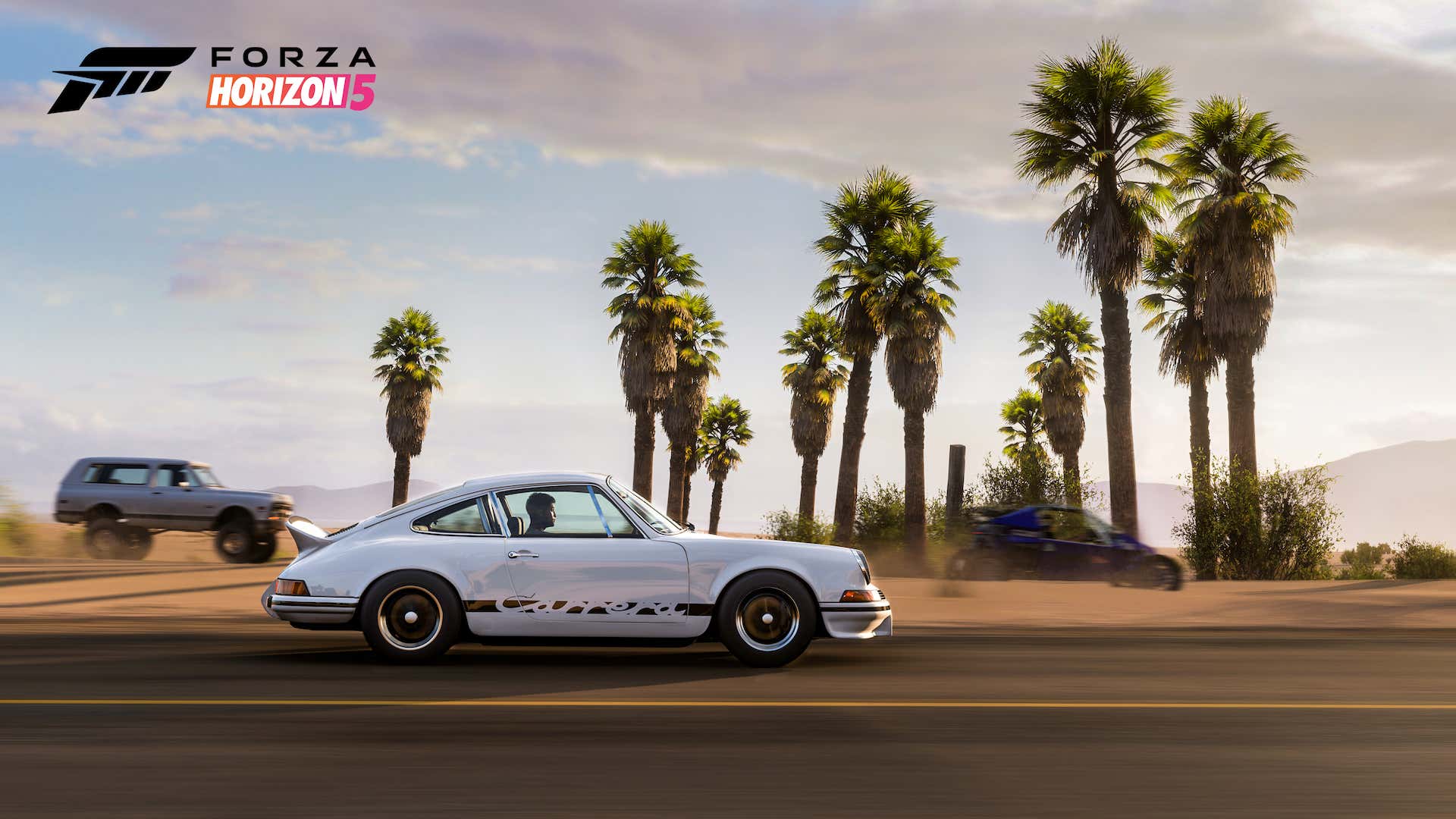 As the first Forza game made for the current crop of Xbox consoles, the graphics are a step up from before. Even playing on the less powerful Xbox Series S, Forza Horizon 5 looked stunningly realistic. Its three-year-old predecessor was already quite the looker, but this next-gen version upped the on-screen pixel ante even more, featuring more detailed environments and crispier-looking cars.

As for game enhancements gleaned that may not show up in a splashy trailer, character customization is a magnitude more involved this time around. At the beginning of the game, you’re prompted to pick from a noticeably bigger roster of base human avatars and can then choose from a wide selection of hairstyles, hair colors, prosthetics limbs, and—get this—a male or female voice. Yes, unlike the mute protagonist of previous games, the person you play as actually speaks now.

On the subject of sound, here’s a car audio demo showcasing how some of Horizon 5‘s most exciting rides will hit the ear.

What’s more, car-collecting is now gamified, with the game offering mystery rewards for owning all of the available cars from a given make. Car customization, meanwhile, is as deep as ever. Slap a widebody kit on your McLaren, throw off-road tires on your Jeep Gladiator, or, if you’re a heathen, engine swap your Lexus LFA. You can even paint your brake calipers to whatever color you’d like. 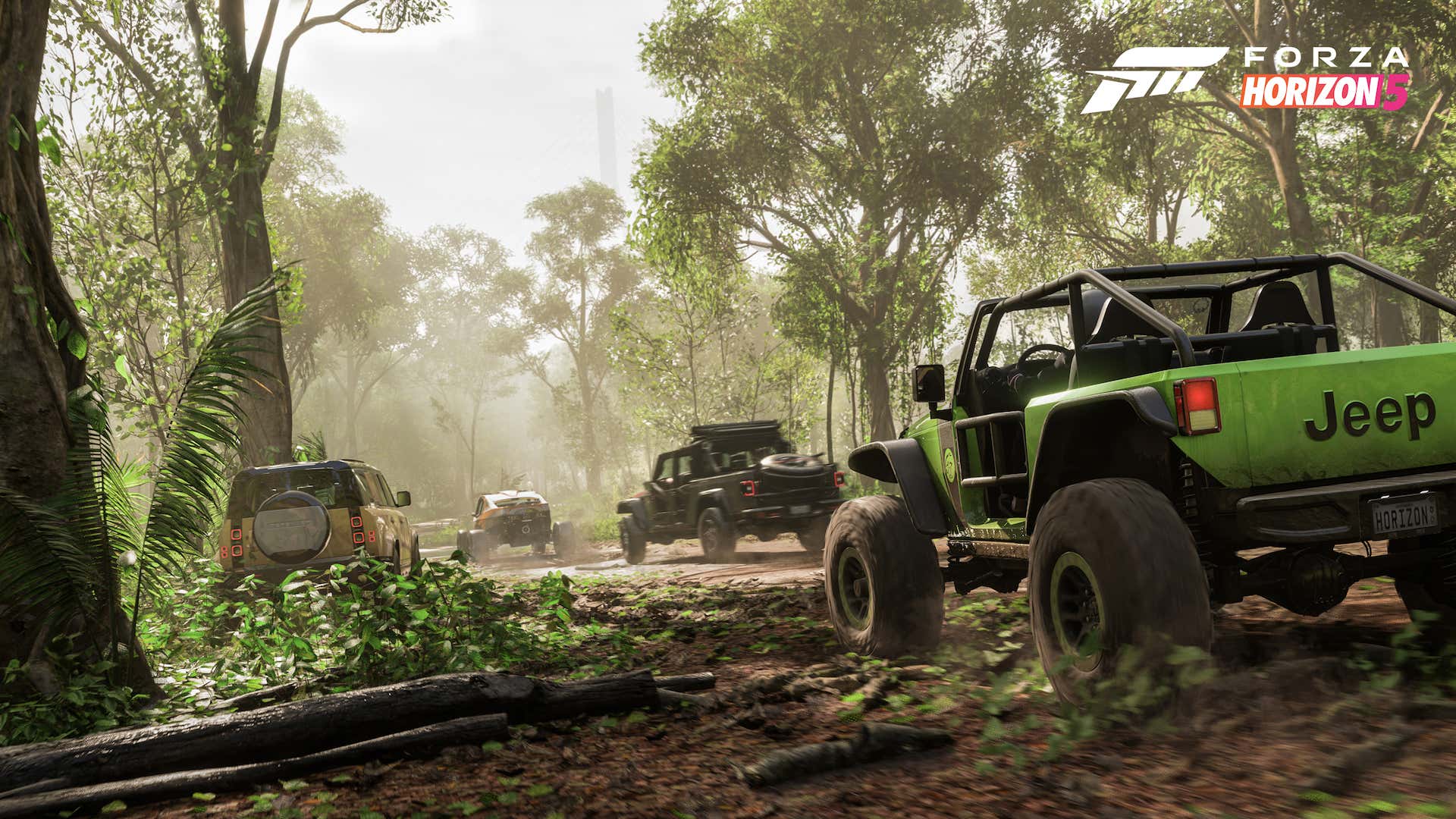 (Oh, and as a Canadian person, I’d like to give a shoutout to the developers for finally taking the first step in improving how units of measurement work in this game by making power units independent of everything else. In previous iterations, you’d either be stuck with the default American units, all imperial, or all metric. Now, though, I can now have distance displayed in kilometers while having all of the cars’ power outputs in good ol’ horsepower instead of kilowatts.)

When and How Can I Play?

Forza Horizon 5 will be out for individual purchase or as part of Xbox’s Game Pass subscription service starting November 9 for Xbox Series X, Series S, all of the Xbox One consoles, and PC. 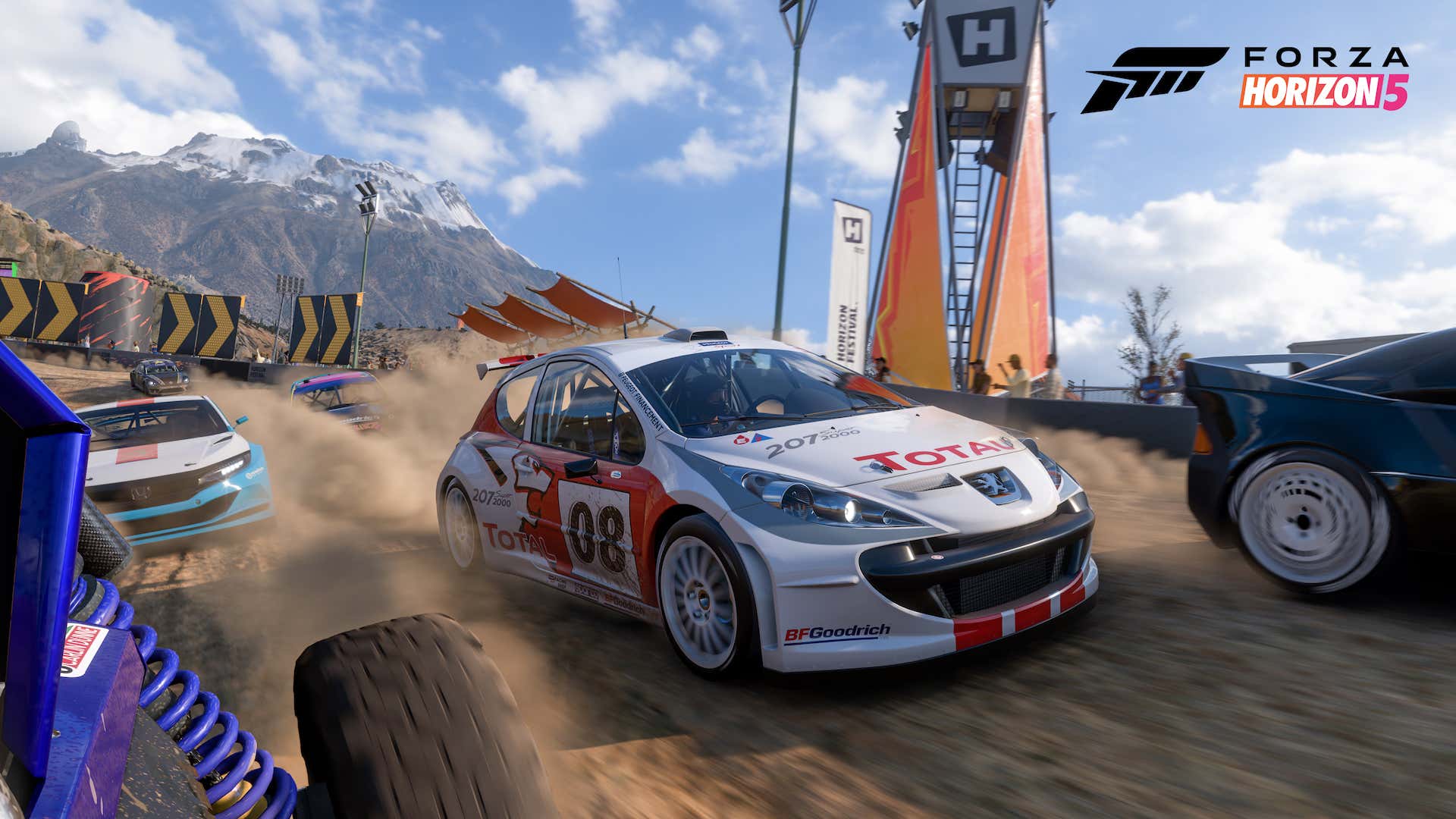 And because I know this sort of thing matters to the people who have read this far, both the Xbox Series X and Series S versions of the game will feature two video modes: a smoother 60-fps Performance Mode or a less smooth but more detailed-looking 30-fps Graphics Mode. Regardless of which you choose, the Series X will run Horizon 5 in 4K while the Series S projects it in 1080p. As for the last-gen consoles, 30 fps is the only framerate available for all three Xbox One models and there are no graphics processing modes to choose from. Resolution-wise, the One X renders in 4K while the One S and OG Xbox One are good for 1080p. HDR is possible with all machines except for the original Xbox One, while Forzavista ray tracing (the only section of the game where ray tracing has been implemented) can only be experienced with Graphics Mode on Series X or Series S.

By now, the Forza Horizon formula is known and a solid bet when it comes to fun. Judging from just the first hour or so of gameplay, Forza Horizon 5 is set to continue that trend, offering the same casual-yet-gleefully epic car festival experience we know and love. I’ll have more to say about it in a full review closer to release but, for now, FH5 feels like it’ll be an immensely entertaining timesink. 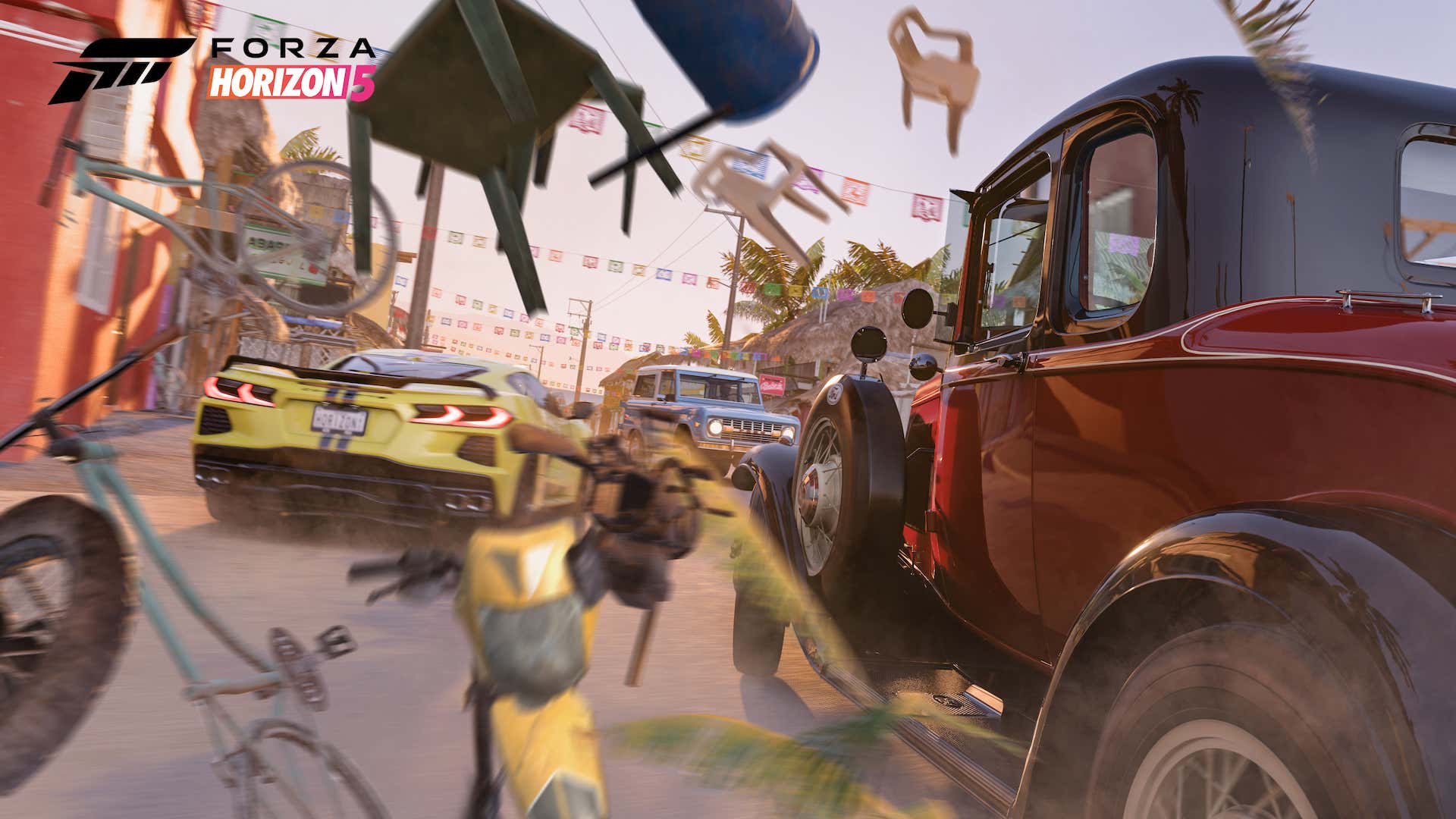 Got a tip or question for the author about Forza Horizon 5? You can reach him here: [email protected]