The car proved its mettle on a stretch with craters so deep that it would tear the sump of most sedans or hatchbacks.

BHPian Tygerman recently shared this with other enthusiasts.

It’s been 2 months (Nov 6th) since I bought my Renault Kiger RXZ Turbo Xtronic CVT variant in a ravishing stealth black color scheme. Though I had done my research before buying it, I was skeptical about how the car would perform on long highway drives, over mountainous terrain and over broken countryside roads. But now that I have spent enough time on the road with the car and after having driven it for about 5000 kms, I wanted to share my honest opinion about this compact, but extremely capable and underrated crossover SUV.

I love to drive to the great outdoors. All this while I have been doing my trips in sedans and hatchbacks. But off late, I have been feeling the urge to own a car with good ground clearance, good power and torque figures to go places where I have been hesitant to go. I wanted a VFM car that’s able to tackle bad roads, with some cool features like drive sense modes, cruise control, a proper automatic, a turbo engine, wireless Andriod Auto and a higher driving position. I had shortlisted Renault Kiger RXZ Turbo CVT, Kia Sonet (HTX DCT) and the Brezza ZXI+ variant.

Though Renault Kiger was my first love, the only deal breaker back in the day was the lack of cruise control, bland interiors and the funky exterior colours. I went ahead with Kia Sonet in a black colour option. This was at the beginning of 2022 and the waiting period for the Sonet was just outrageous.

After 6 months with the delivery not in sight, I booked the newly launched Brezza ZXI+. I expected the car to be delivered in under 3 months based on what the sales advisor said. Then came October, and the sales advisor kept tossing me around with no car in sight (after 4 months). That’s when I glanced back at Renault Kiger MY2022.

The already attractive Kiger had become a better proposition with some smart updates in the mid of 2022. It now had cruise control, a smart-looking interior with splashes of red and piano black, a wireless charger, sporty upholstery and an amazing black colour option.

10 days later, I was owning one! The car-buying experience was just great. I hardly did anything and the Sales Advisor kept his word. Let’s strike through the not-so-pleasant ones out first.

My likes outweigh the dislikes by a huge margin.

My first long drive on the Renault Kiger was to Bandipur National Park and onward to my home in Kannur, Kerala. I did the following route. The entire trip was fun. Reaching Chitradurga fort took some effort. Google Maps showed a route through the old city with lanes so small that even autorickshaws could not negotiate freely. There was some serious traffic too.

At some point, the only narrow road I was following was dug up and I was lost. I hired an auto and asked him to pilot my way to the place I was staying. I could negotiate the tight corners with ease and the CVT gearbox was a boon. I just had to focus on the obstacles. From Belgaum to Chitradurga, the drive was absolutely effortless. I was in ECO mode with Cruise enabled.

The next day’s drive was even better. It was mostly a 2 lane road after a right turn to Kunigal from National Highway 48 and I stuck to the Normal mode for the sake of overtaking. Overtaking in ECO is difficult. Somewhere after Kunigal, before I merge to the Nelamangala – Srirangapatna state highway, on a service lane there was a bombed-out stretch with craters so deep that it would tear the sump of most sedans or hatchbacks.

There were some cars already that were stuck there. I evaluated the craters and then drove through it. I must have slightly scraped the bumper but nothing serious. My happiness knew no bounds. In my Dzire, negotiating some stretch like that would have been impossible. But Kiger took it in its stride and proved its mettle. Rest of the trip was smooth sailing. I camped at the Bandipur Safari Lodge for a couple of days and did some safaris. That’s where I ended up with a dent after banging a tree in reverse. Fortunately, the dent did not impact the tailgate lock.

Though I had a shorter route via Muthanga range of Wayanad wildlife sanctuary, I chose the longer route home. I continued on the Ooty road, crossed Mudumalai and the beautiful little town of Gudalur. This route is childhood nostalgia. Devarshola is also a beautiful town with tea estates all around. The road to Sultan Bathery is very twisty and I put the Kiger to the test. It did give me decent mileage even on those roads. I had a light foot on the accelerator and braked only when necessary. I also tried descending in the Low gear and it works well. This will help you to descend steadily and you will not have to work your brakes often. I finally reached my home via Sultan Bathery and Mananthavady.

On my return leg, I drove to Pune via Mangalore, Kumta, Yellapura and Hubli. I started early at 3am to avoid the road repair and traffic from Kannur to Mangalore (NH17). The morning breakfast at Udupi is something I always crave for while on this route and a scenic tea break at the Maravante beach. It was a relaxed drive all along and I was enjoying 1980s Synthwave on the Arkamys surround system. It has a great sound quality and coupled with the wireless Andriod auto, it is a pleasant experience. The cabin was quiet all along.

With not many ownership experiences out there for Renault Kiger, I am sure my experience will help some users to simplify their car buying decision. I must have missed a lot of other information that some of you might be looking for, but feel free to ask in the forum section. I will try to answer them. I will try to pen down some of my trips too as a travelogue going forward.

The large boot swallowed all the luggage with enough space for a few more small bags. The cabin did not have any luggage strewn around and also the dual glove box came in very handy. Enroute Chitradurga, we had a breakfast pitstop at Sai International 30 odd kms from Kolhapur.

The crowded streets of Chitradurga. A breakfast pit stop after Kunigal The dent at Bandipur Traversing the Wayanad ghats to reach the coastal town of Kannur The Kiger resting at my home after a maiden long drive 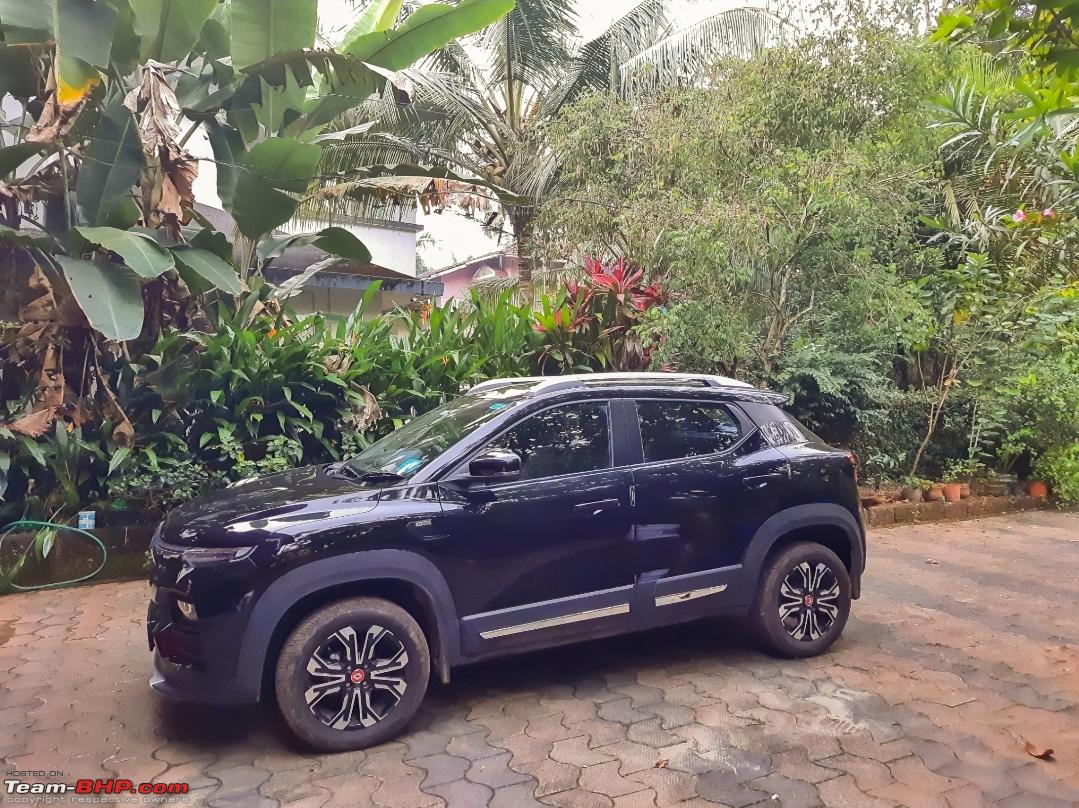 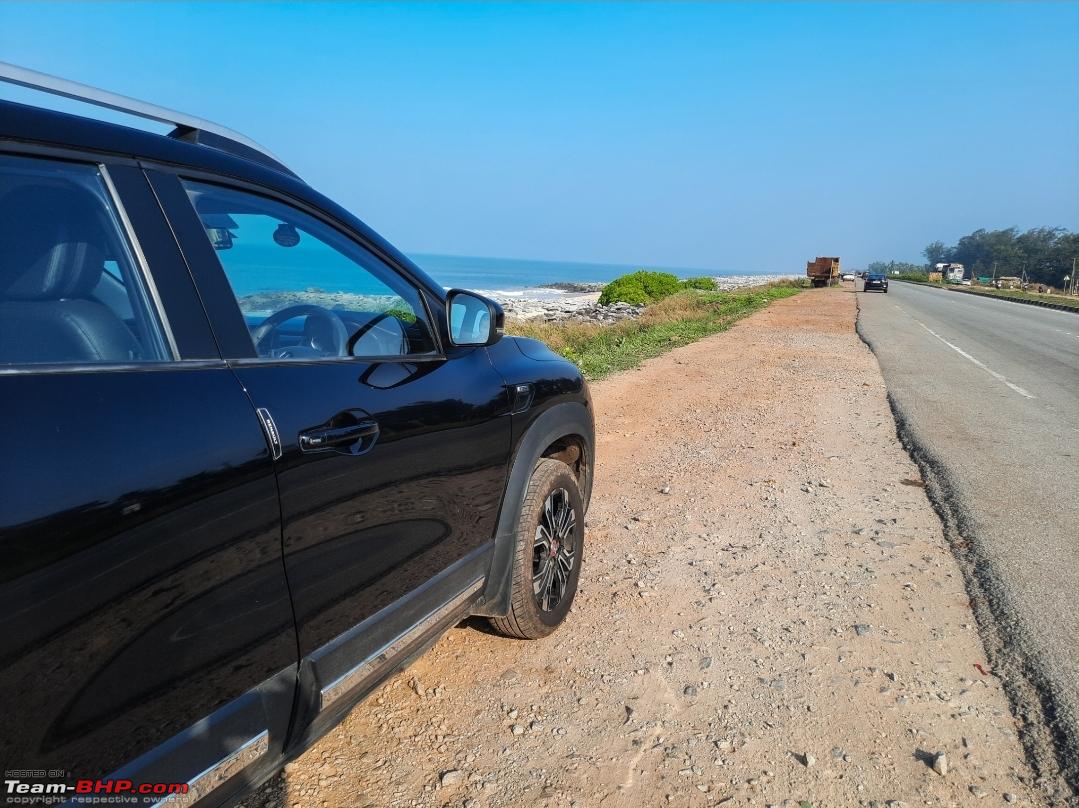 Finally back to the base 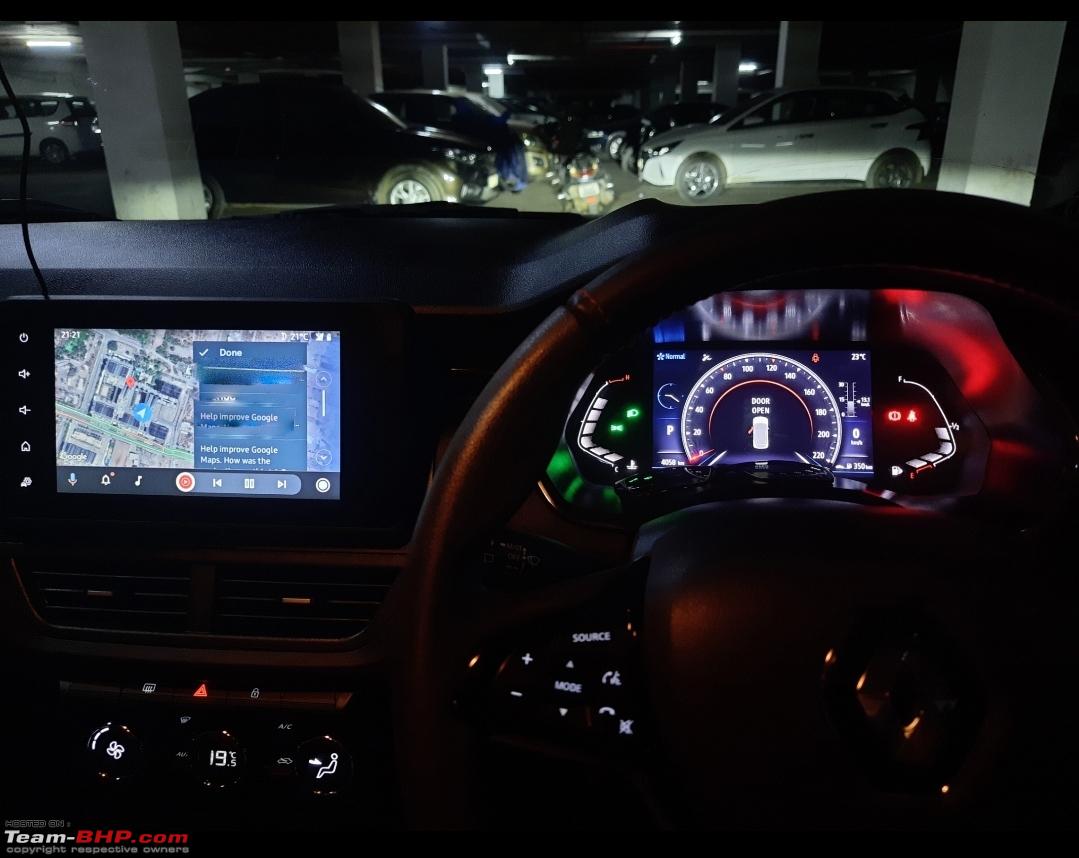