With my Toyota Hiace triumphantly repaired by the legends at World Famous 4×4, risen from the ashes of rust, and my purpose discovered and my mental health restored, I wasted no time getting the hell out of Los Angeles. In my time spent wiling away hours, anticipating the completion of her frame surgery, I began to loathe being stuck in that city. This wasn’t entirely its fault—after all, I still stand by my love letter to the city where the possibilities felt endless—but the experience of LA is profoundly different when homeless and directionless.

Los Angeles is a city where the amplitude of American daily life has been ratcheted to the highest levels mentally tolerable. It is constantly active, which is incredible when ambitions and moods are high, but living there while your life has been paused is like trying to walk through Pacific waist-deep surf in a straight line. Stop moving and the sand starts to erode beneath you, as the sky-high cost of living begins to decimate any money or any stability you had. Enjoy the views for too long, and the surf has pulled you deeper towards drowning; the city constantly churns through businesses and events and work that you’ve missed out on. The only way to continue wading through it is laser-focused straight ahead, constantly moving and disregarding any potential distractions you might find. While I was stuck there, my career did indeed advance—I got a few more press cars, I lined up some more classic cars to drive and photograph for my retro reviews, and I even went to my first-ever first drive, but all I wanted was the ability to rest, and LA does not allow for rest. 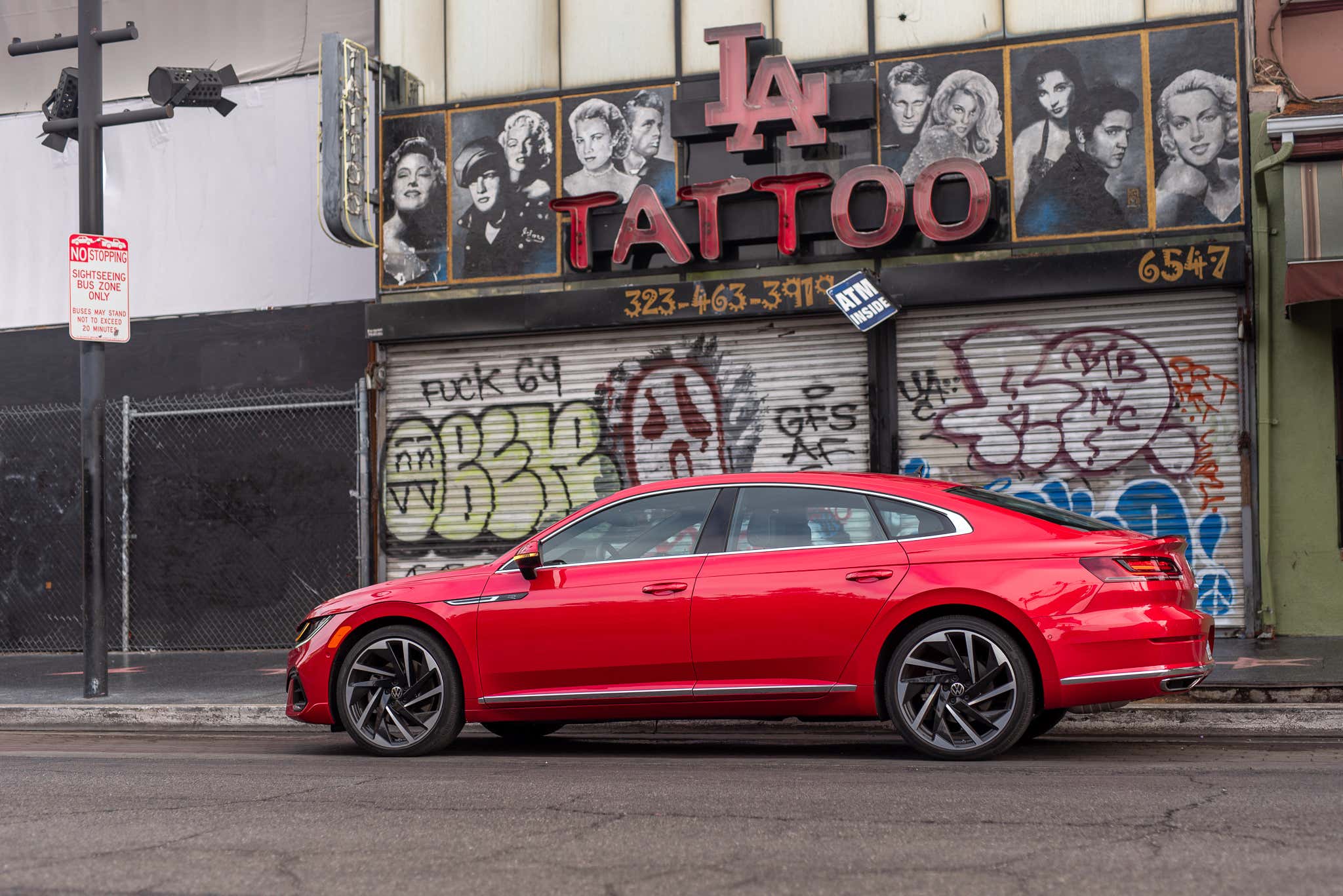 [Editor’s note: Writer Victoria Scott is taking off to travel the country this year and explore car culture in a JDM 1995 Toyota Hiace, and we’ll be chronicling her adventures through a series on The Drive called The Vanscontinental Express. It’s natural to yearn for the open road at a moment when it feels like the world is waking up from a yearlong daze. But as a trans woman looking for her place in the world, Victoria’s journey is anything but your average road trip. This is part 13; you can read parts one through twelve here.]

Perhaps it was the spiraling bleakness of my mental health as I waited for Marsha to return, unsure of my journey’s future, but the most memorable random encounters I had while stuck in Los Angeles were ones that vastly changed my outlook on the city and how I belonged in it. The first was with a trans woman outside Starbucks at the corner of Hollywood and Vine. We chatted for a while; she was unhoused, and tired, and did not know where to turn, and we stood at one of the most iconic intersections on the Walk of Fame, with the stars for the astronauts of the Apollo landing under our feet. The baristas would not give the two of us—disheveled, tired, and clearly just doing our best—a pen so I could jot down a phone number, the only thing I could offer her. The powerlessness I felt in such a patently absurd scene—an iconic corner of the most famous city street in America surrounded by untold riches, unable to even borrow a pen—made me question what I was offering to the world in general, much less a city as indifferent to suffering as Los Angeles.

The second random encounter that seared into my memory was when I was trying to use the bathroom at the beach. A man spotted me, realized I was trans, and proceeded to follow me, shouting insults. It ended up being fine; I evaded him and he didn’t attempt to physically harm me, but the feeling of security I had in my existence there was instantly shattered. It was one random guy, of course. I never crossed paths with him again, and I was safe. It could have happened anywhere, and I am thankful it was an isolated incident and I escaped serious harm. 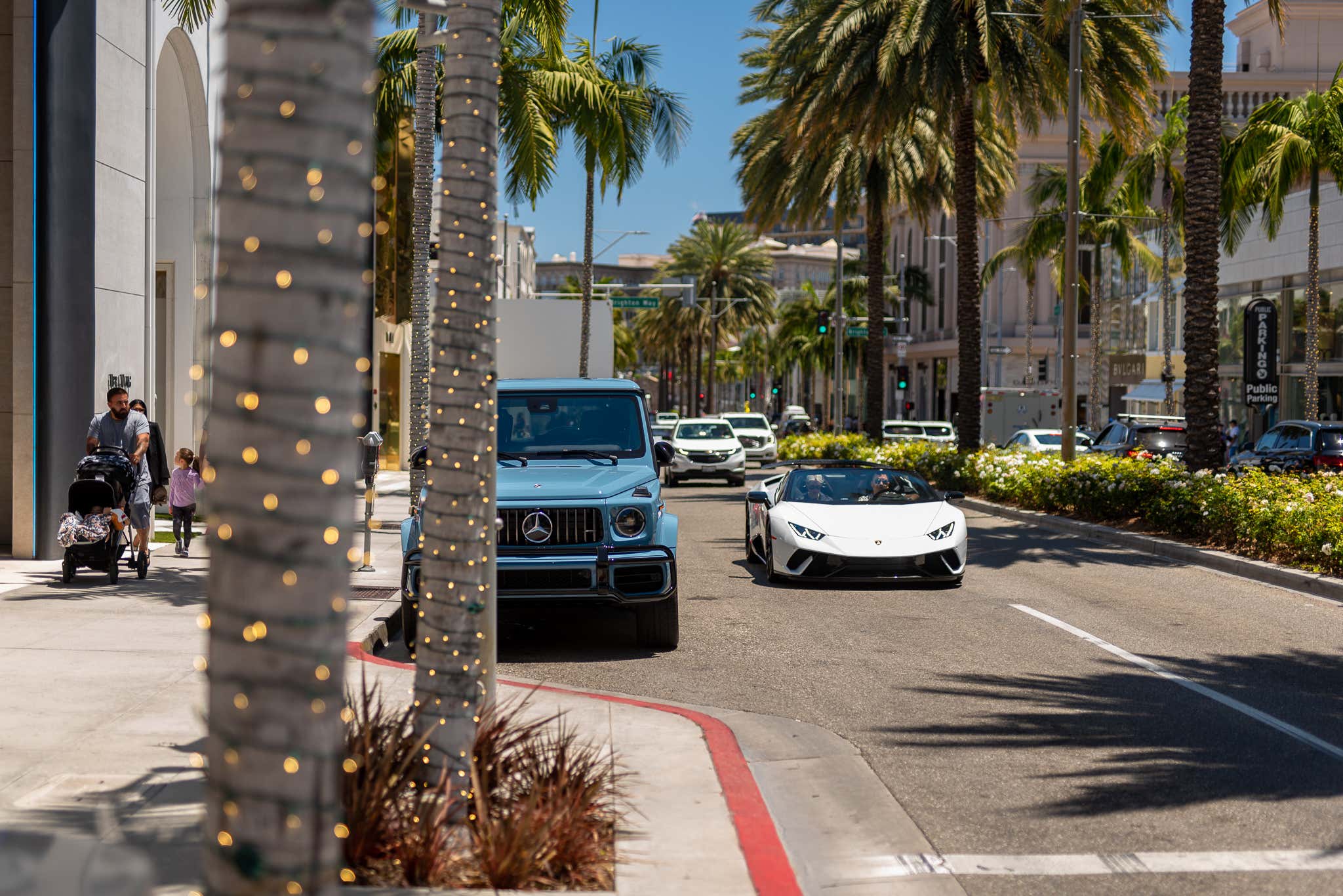 But from there—as protests about the Wi Spa incident broke out, and Proud Boys marched on City Hall—it made me realize that my sense of safety I originally felt came as much from presenting as wealthy than from any inherent character of Los Angeles. I got to feel desirable as I cruised Rodeo in that bright China Blue G-Wagen because it cost $187,000. I did not, and do not, belong any more or less in the city than I have anywhere else on my travels in the absence of a fancy car or nice clothes. I am just another trans woman: Some people will respect me, and some will not, but without the projection of wealth, they will not fake any courtesy they don’t want to.

All of this said, I still do enjoy the city, and I am fortunate to have met the people I now know there, whose kindness was the only thing that kept me grounded through such tumult. But I am in a part of my life where I need to slow down and self-actualize who I am and what I truly want, and in a city like Los Angeles, where reflections of storefronts are the strongest form of self-perception and the constant hustle of progressing drown out all other thoughts, I lived a life antithetical to the entire goal of my trip. 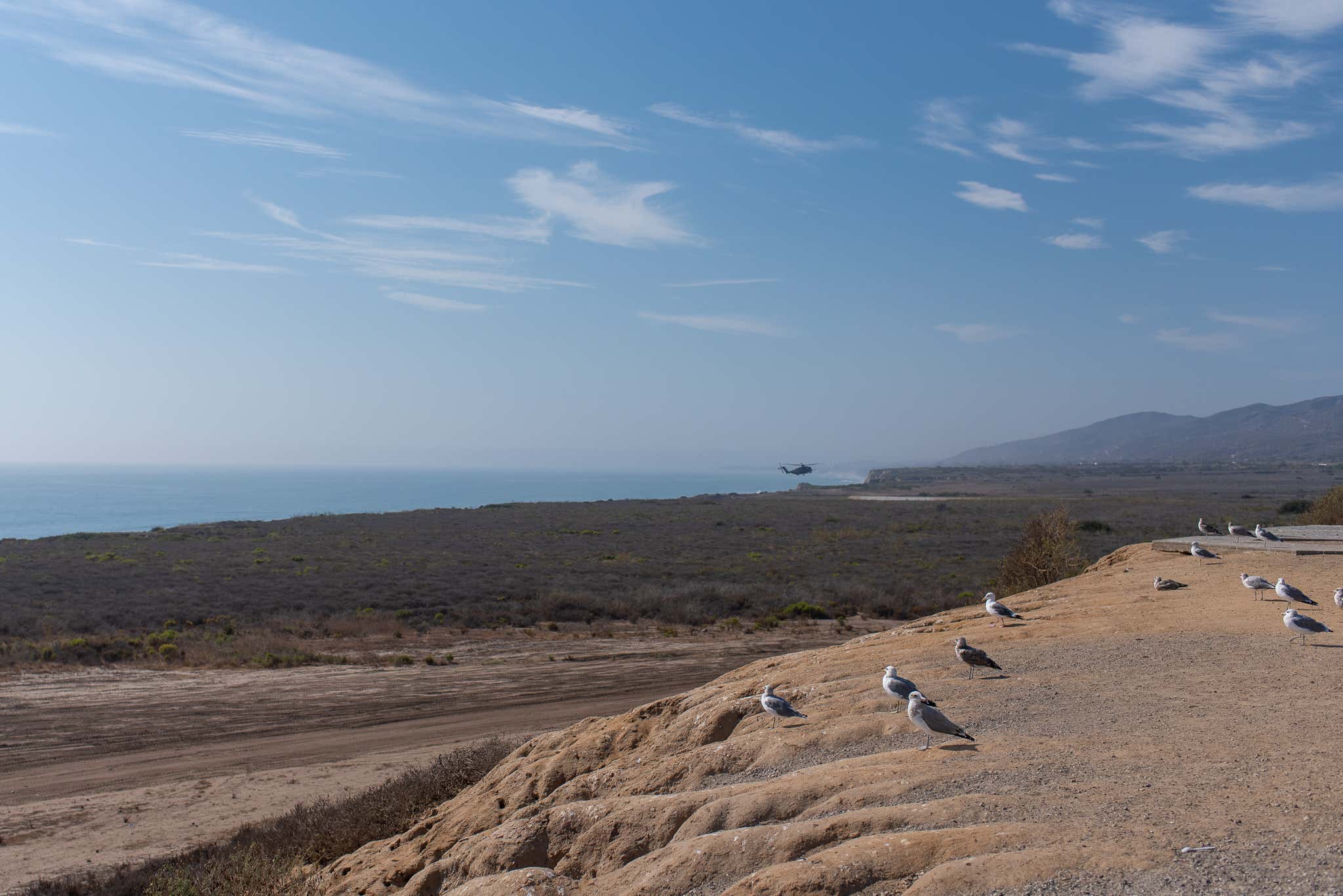 So with Marsha mobile once again and my autonomy restored, I blasted down the southern coast of California to Oceanside. My friend Eri—the one I had talked about when I first got to Los Angeles—had been having a bit of a rough time, and I wanted nothing more than to finally feel like I could offer someone I cared about some comfort. The detachment of LA had done as much damage to my psyche as withdrawal from SNRIs had, and the ability to help in whatever way I could restored my sanity at least a bit. 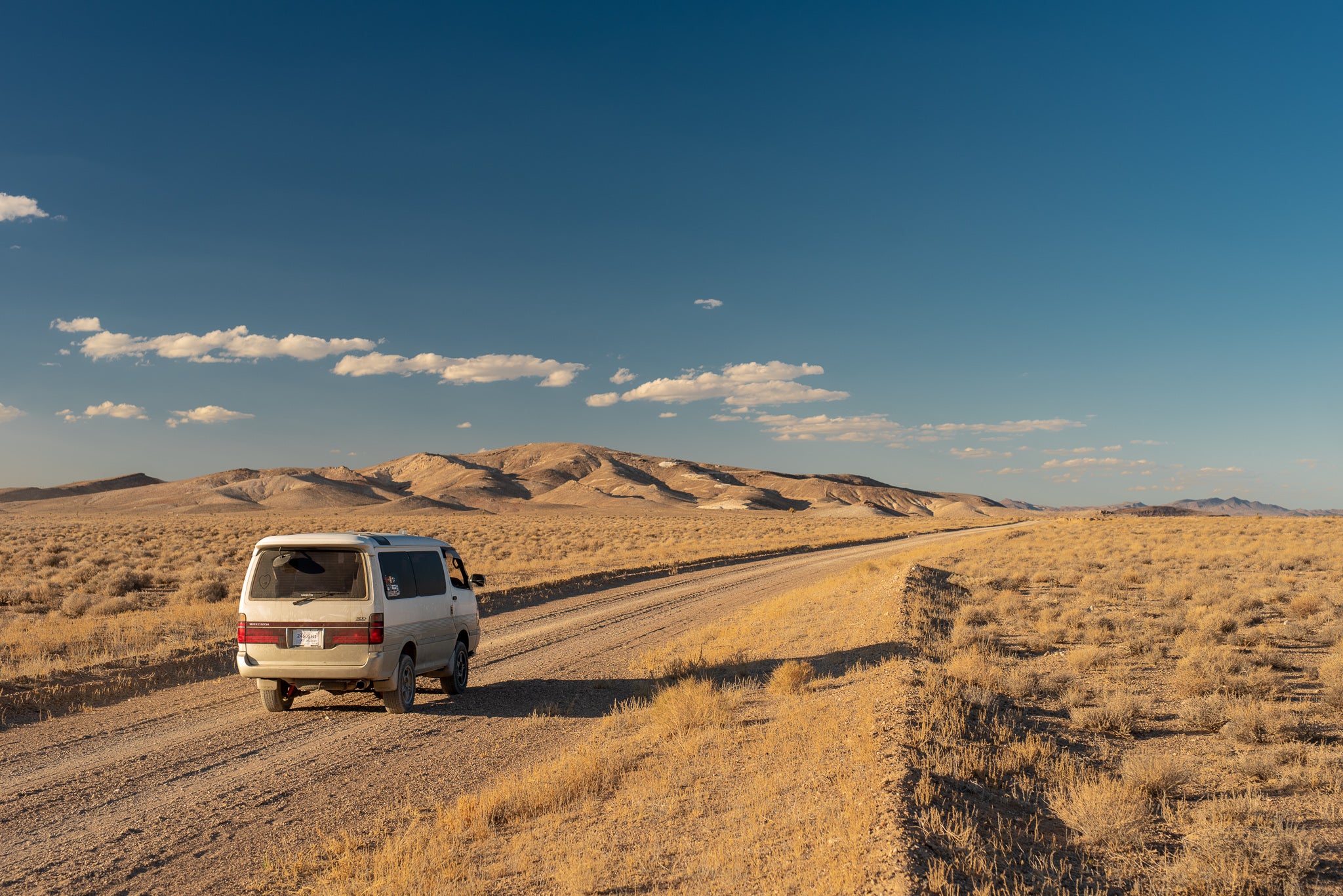 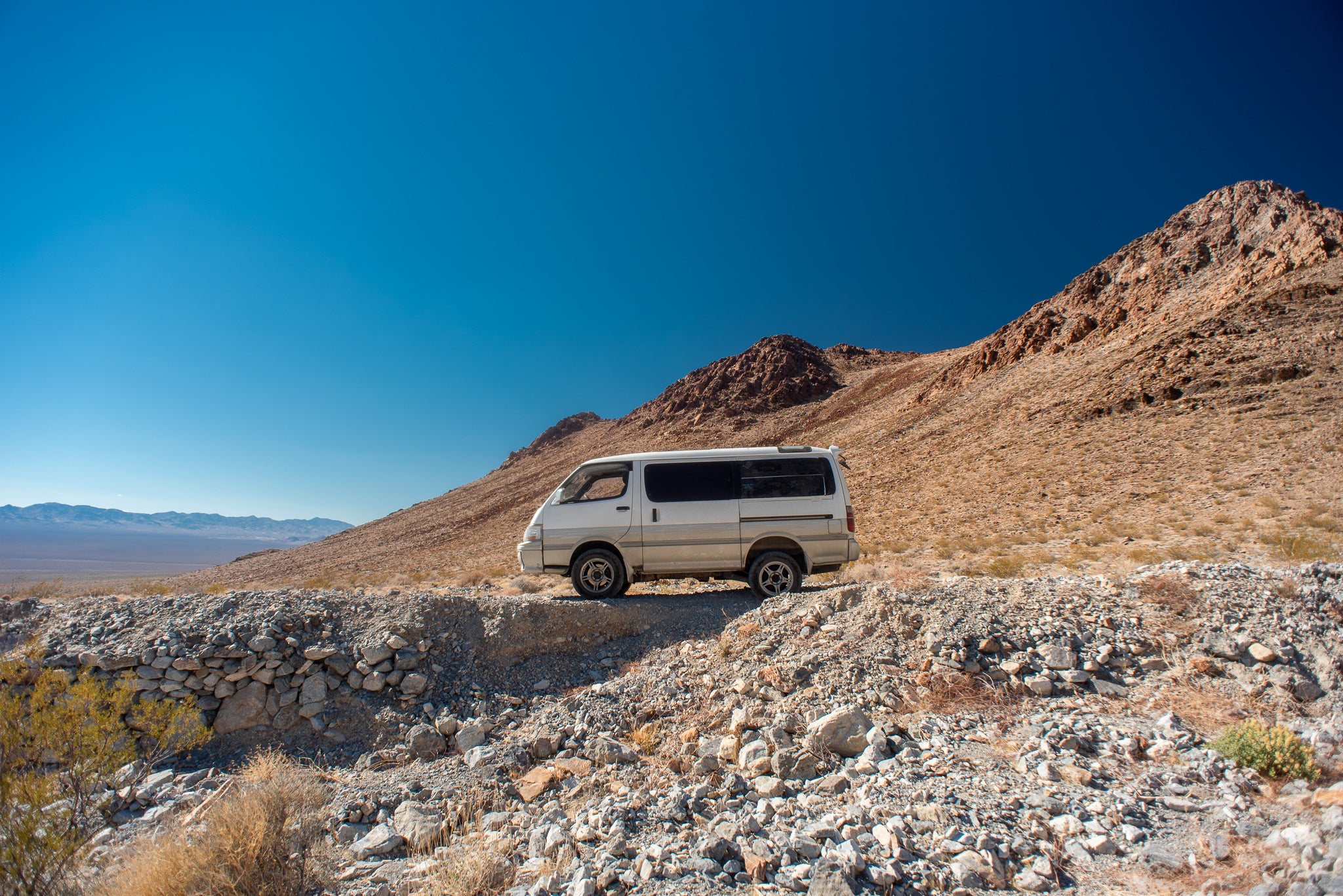 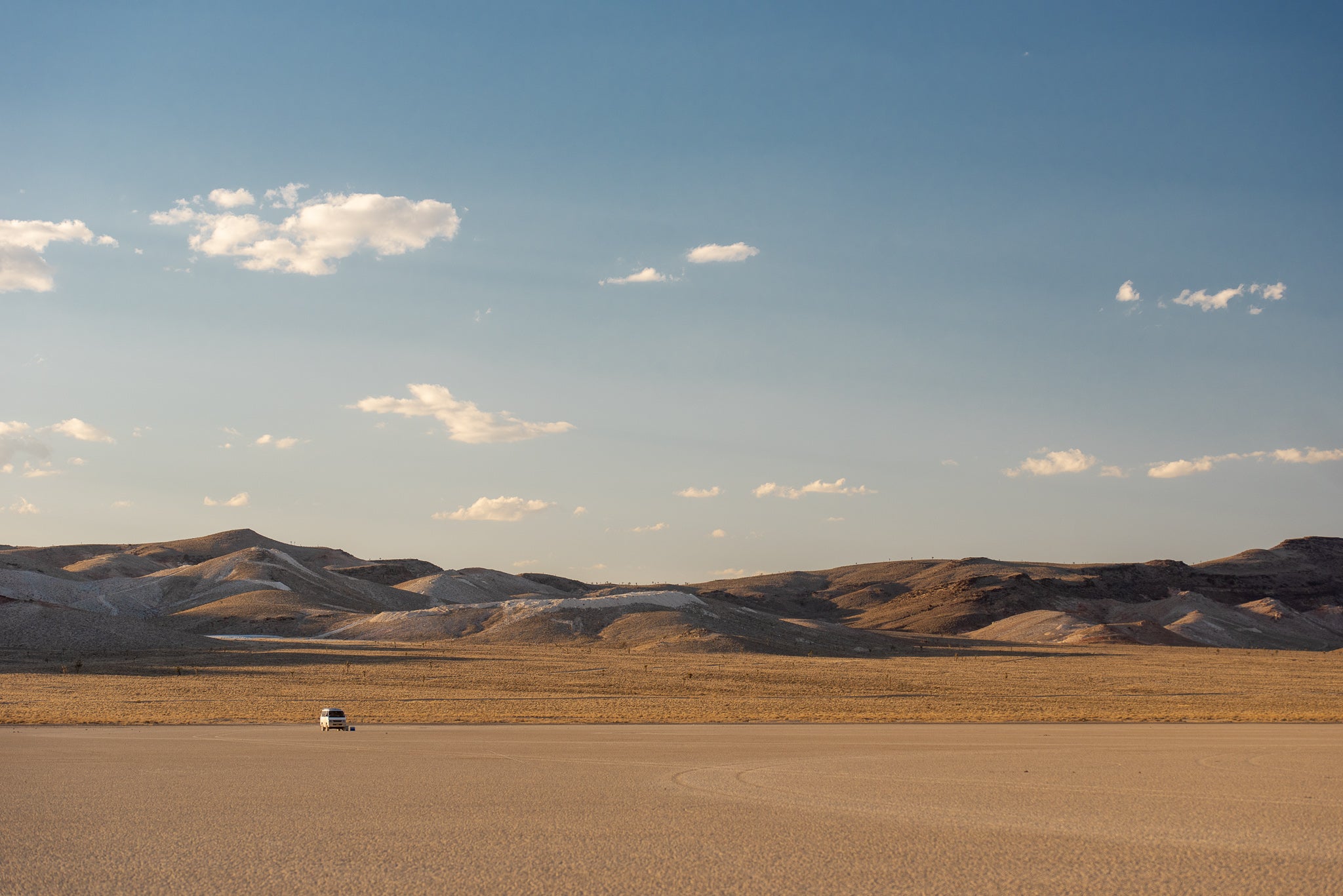 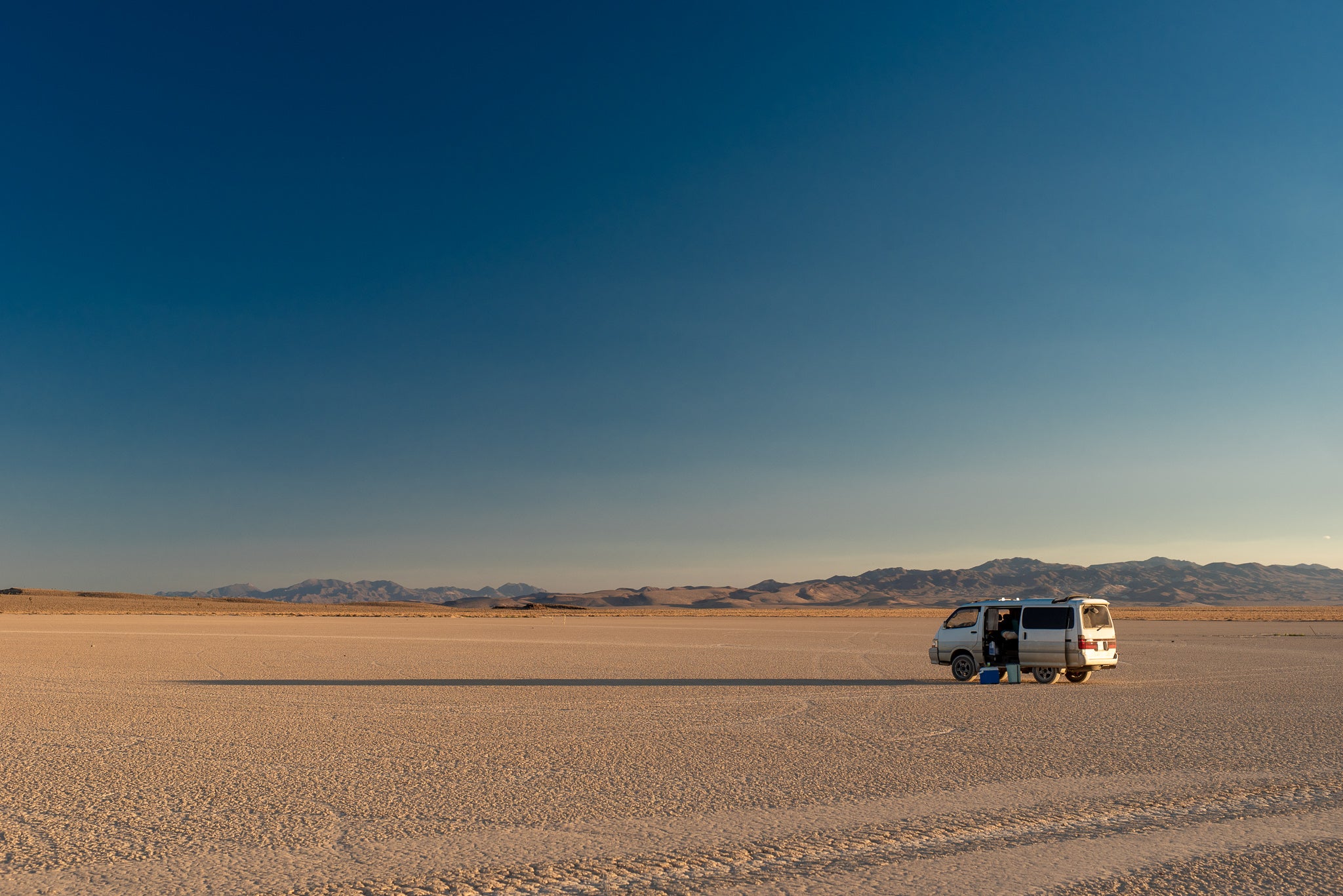 From there, I booked it back to the desert. I drove through Mojave, Death Valley, and then eventually the massive chunks of BLM land that surround U.S. Route 95 through the vast emptiness of Nevada. I stopped taking interstates again, just like I had in New Mexico; I was desperately seeking peace like I had felt then, and I rapidly found it. The desert is, of course, still gorgeous to me, but with the novelty gone and Los Angeles a fresh memory, the reason it speaks to me became apparent. 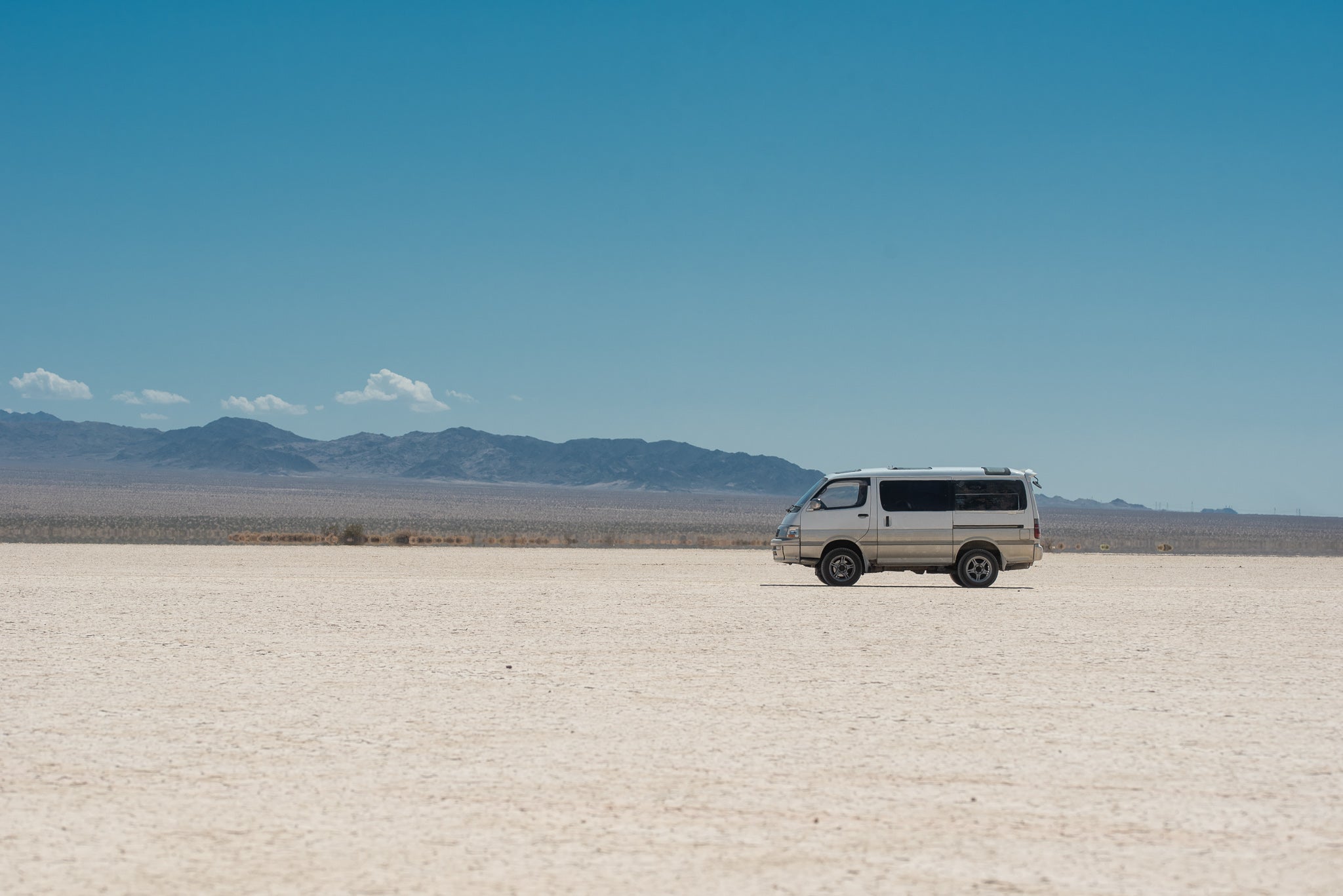 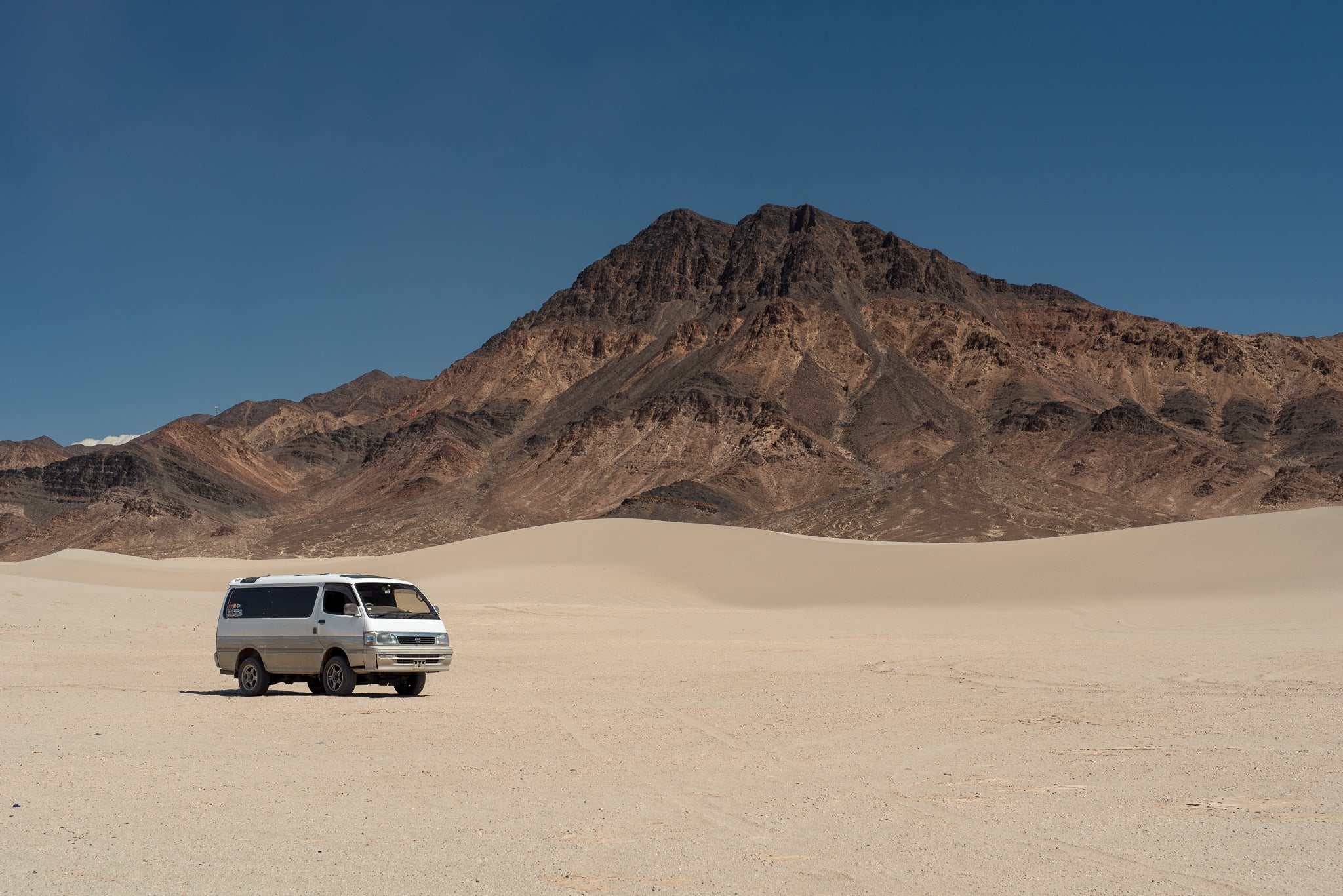 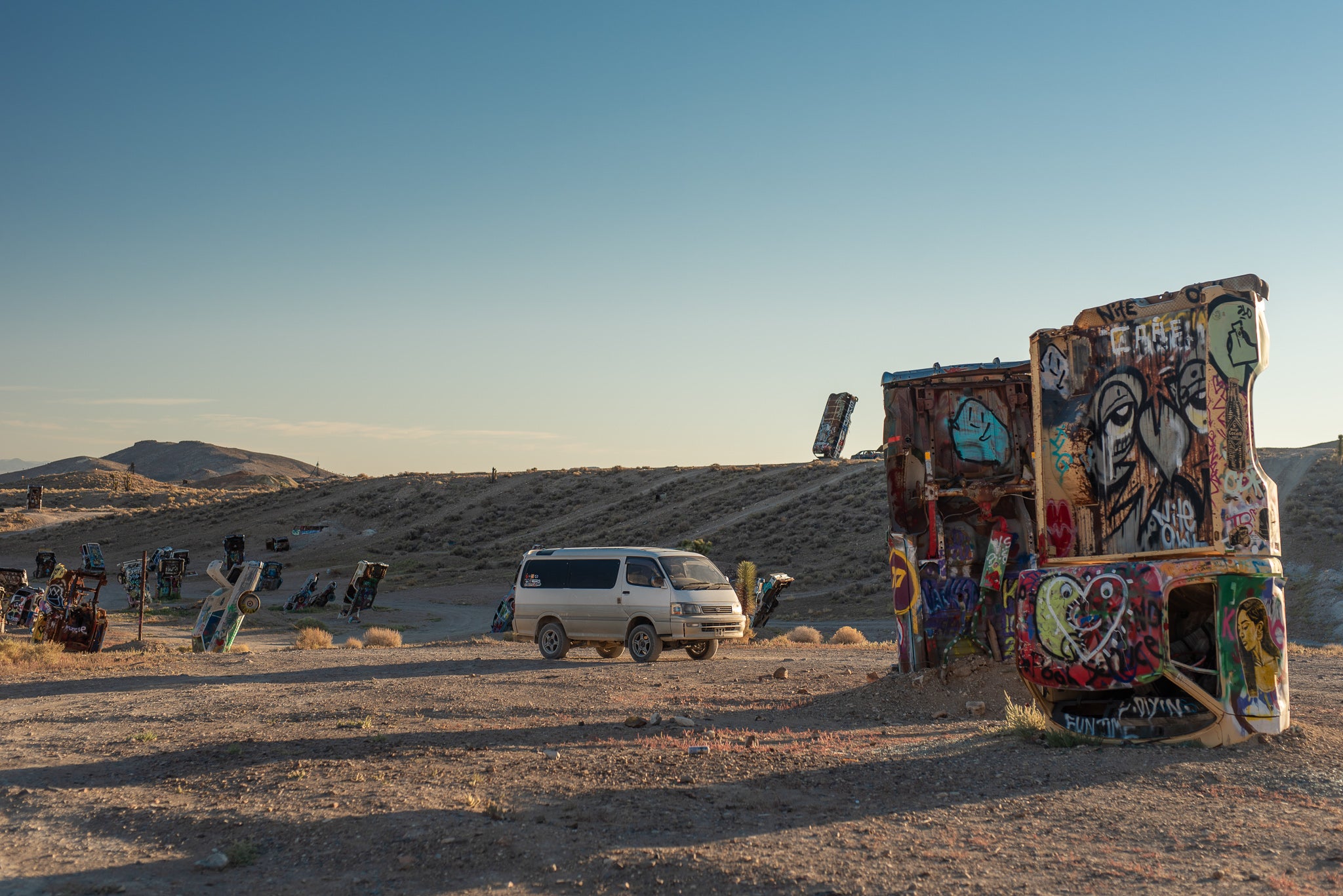 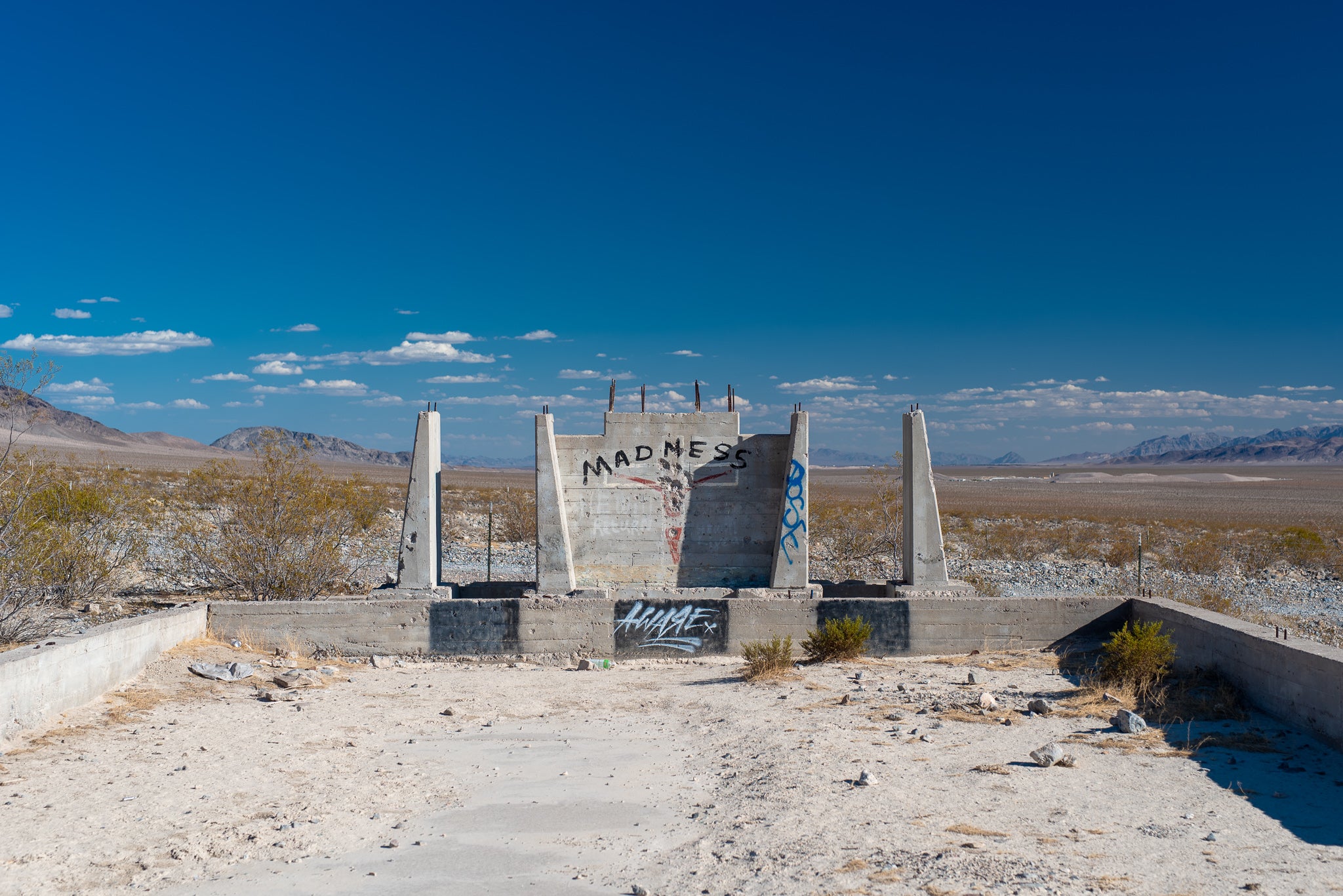 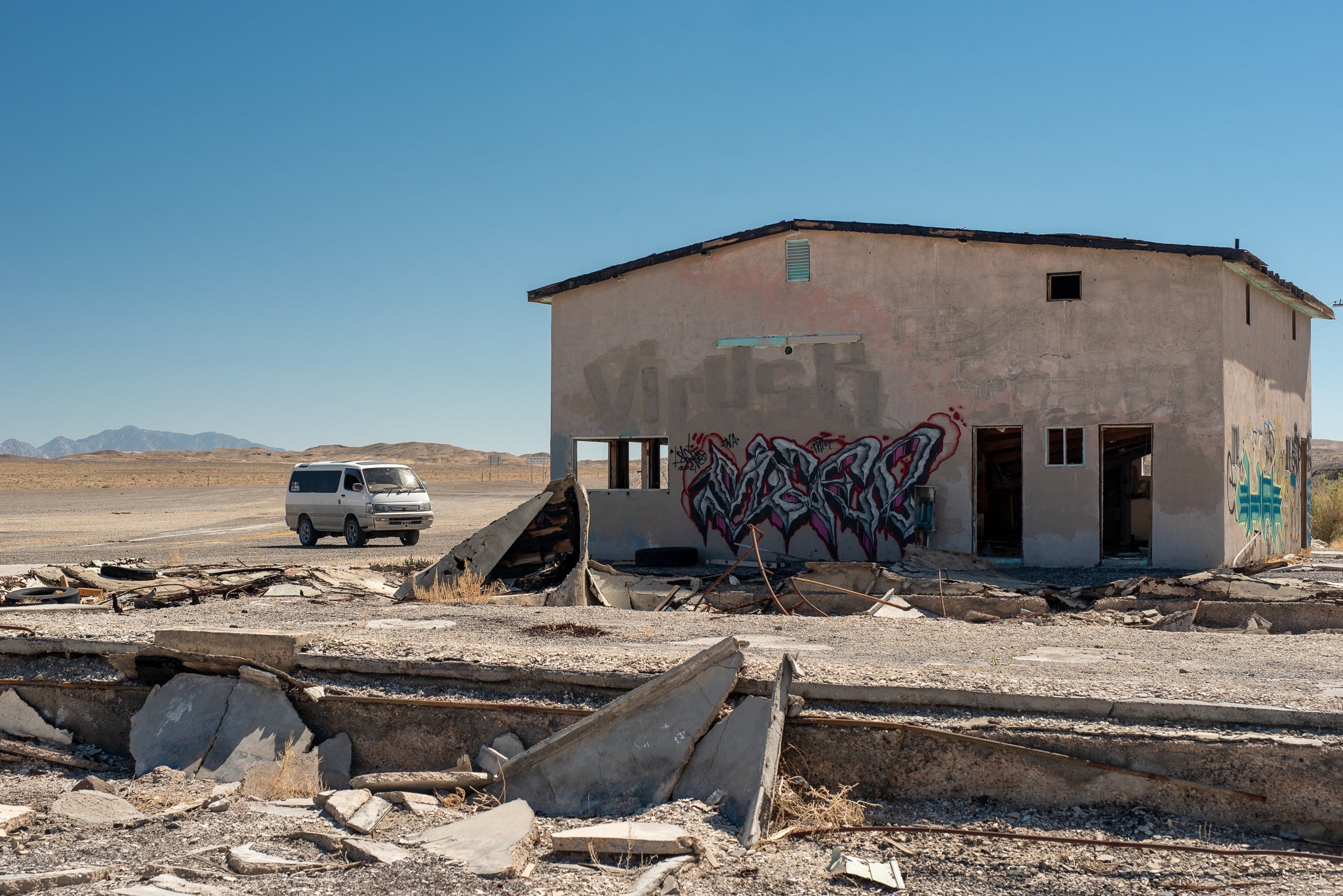 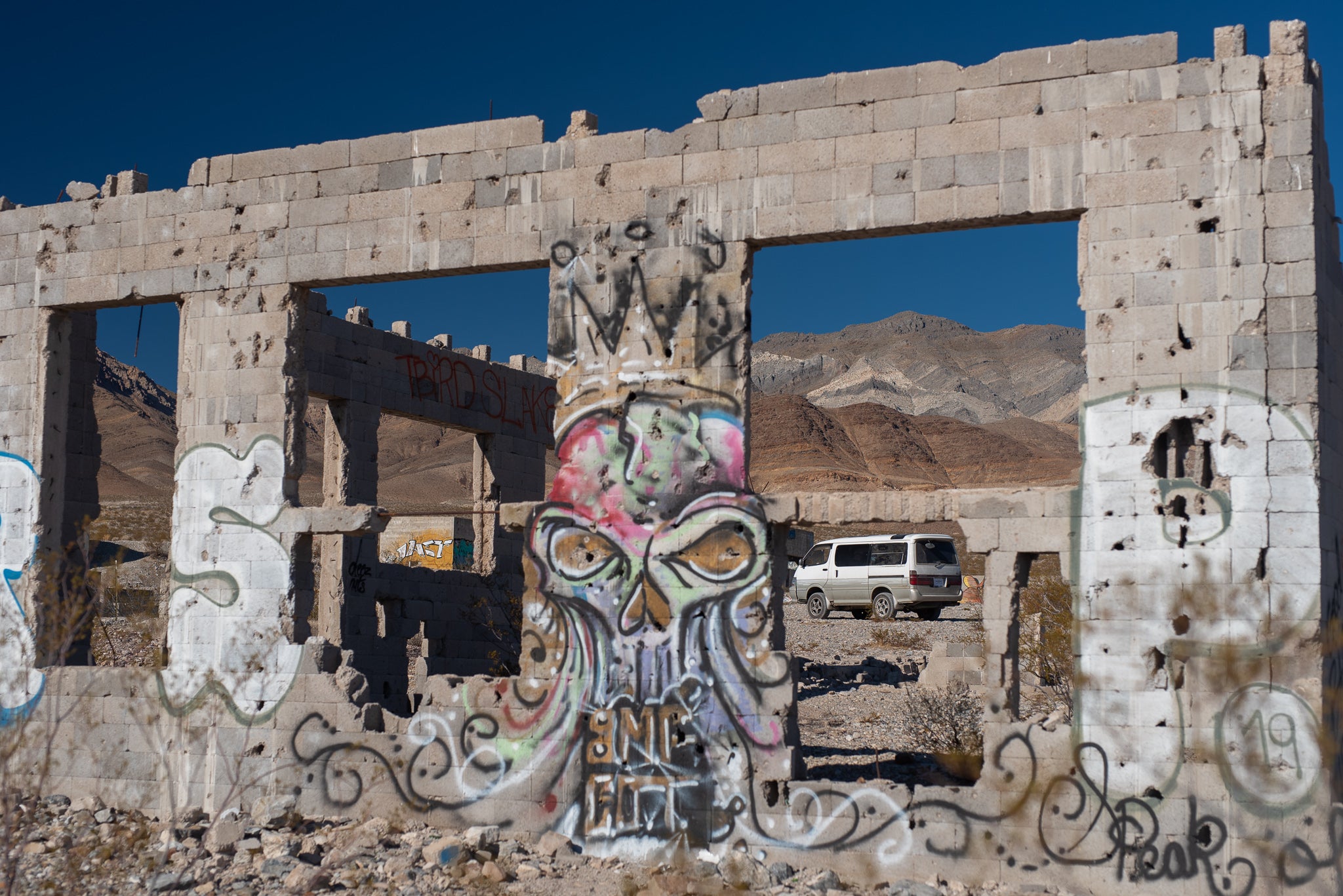 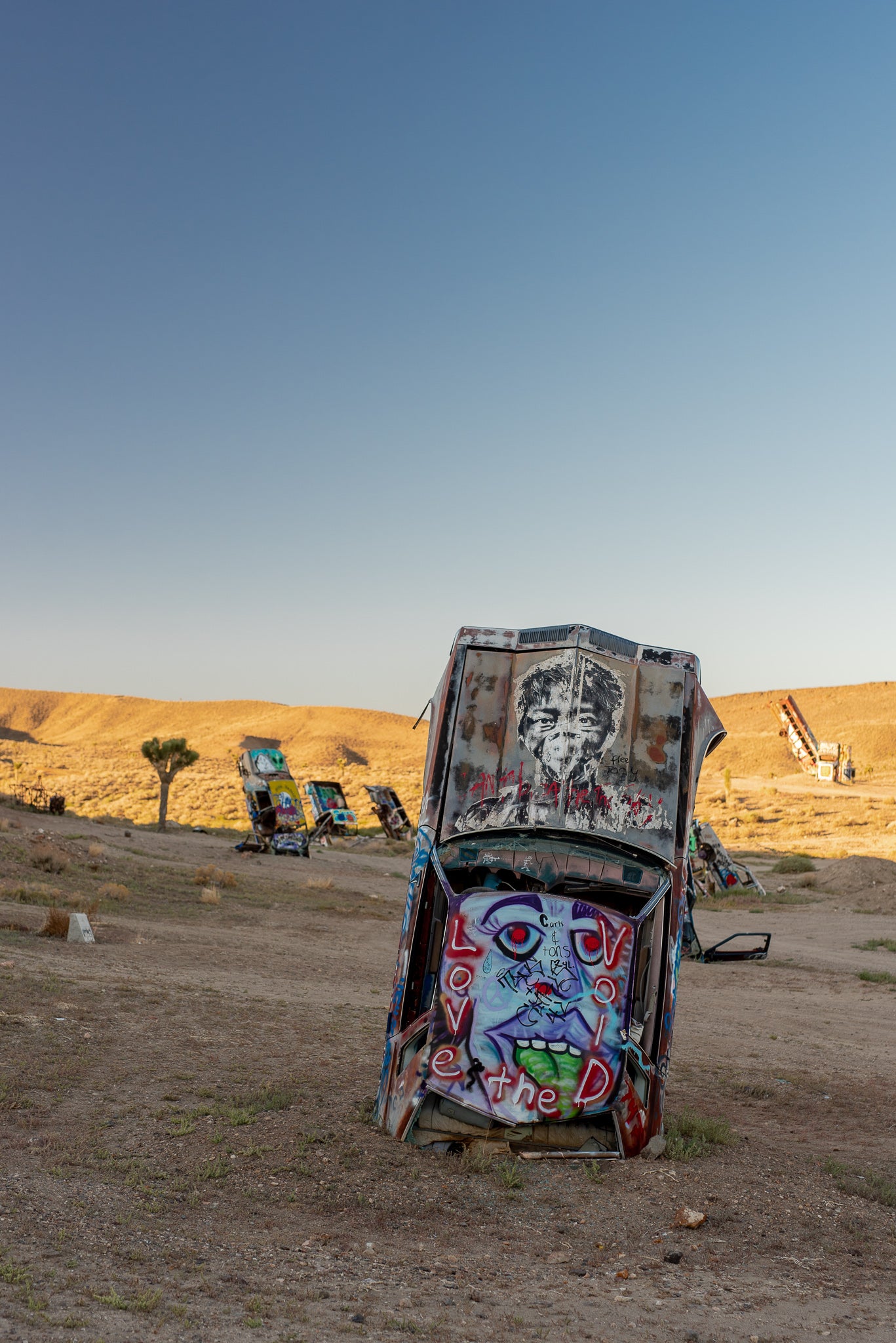 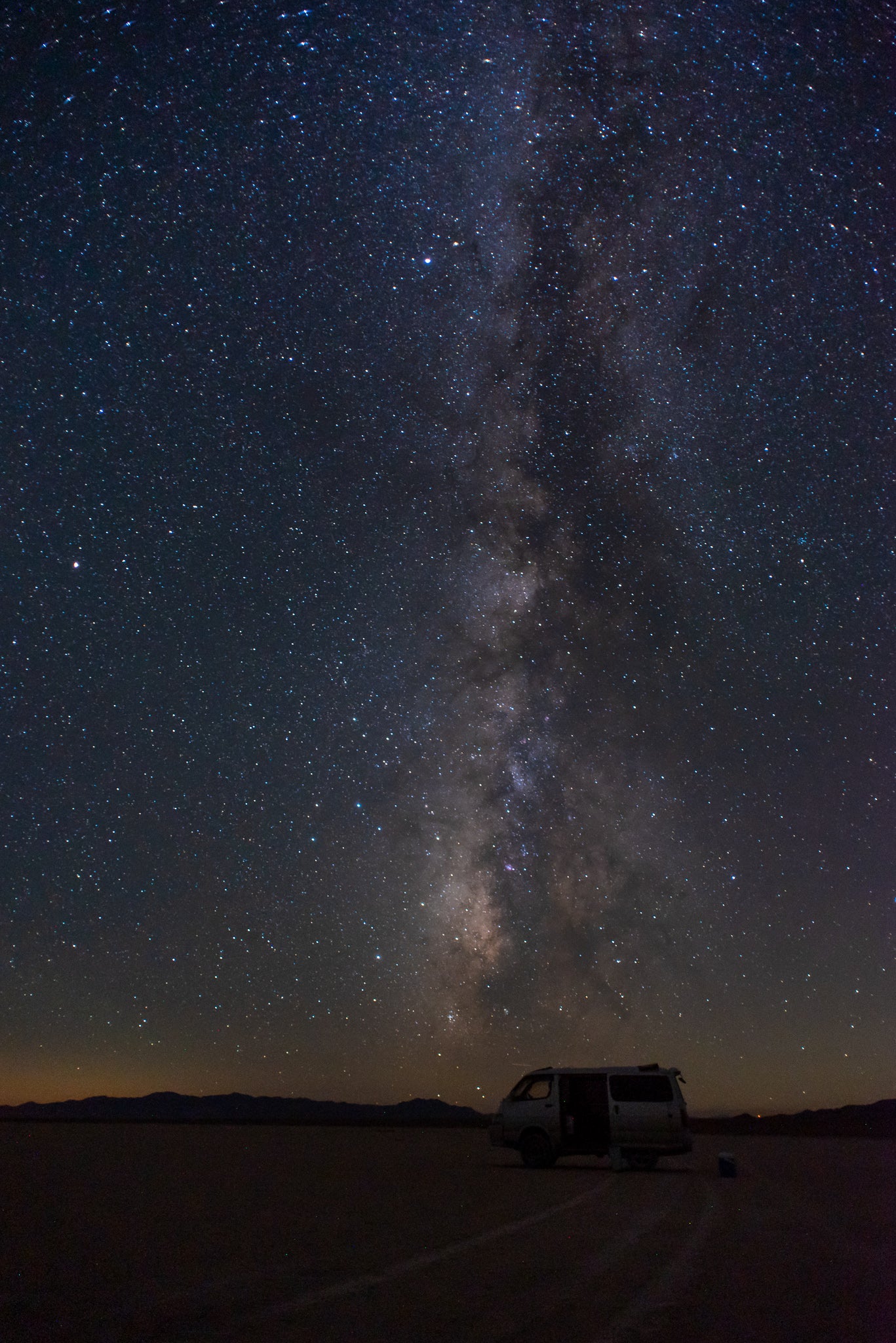 The vast stretches of barren land are ageless in a way that relaxes me. The sense of timelessness is overwhelming. I gazed at the same stars that every human being since the dawn of time has stared at, and I walked on 25,000-year-old dunes. Even the decay of man-made things is gorgeous out here; they are a fleeting moment in a land defined by eternity. As I drove past cars frozen into the dirt like tombstones at the International Car Forest of the Last Church or pulled into abandoned buildings covered in tags from random artists that had visited in the previous decades, even deterioration felt beautiful and I felt fortunate to witness it. 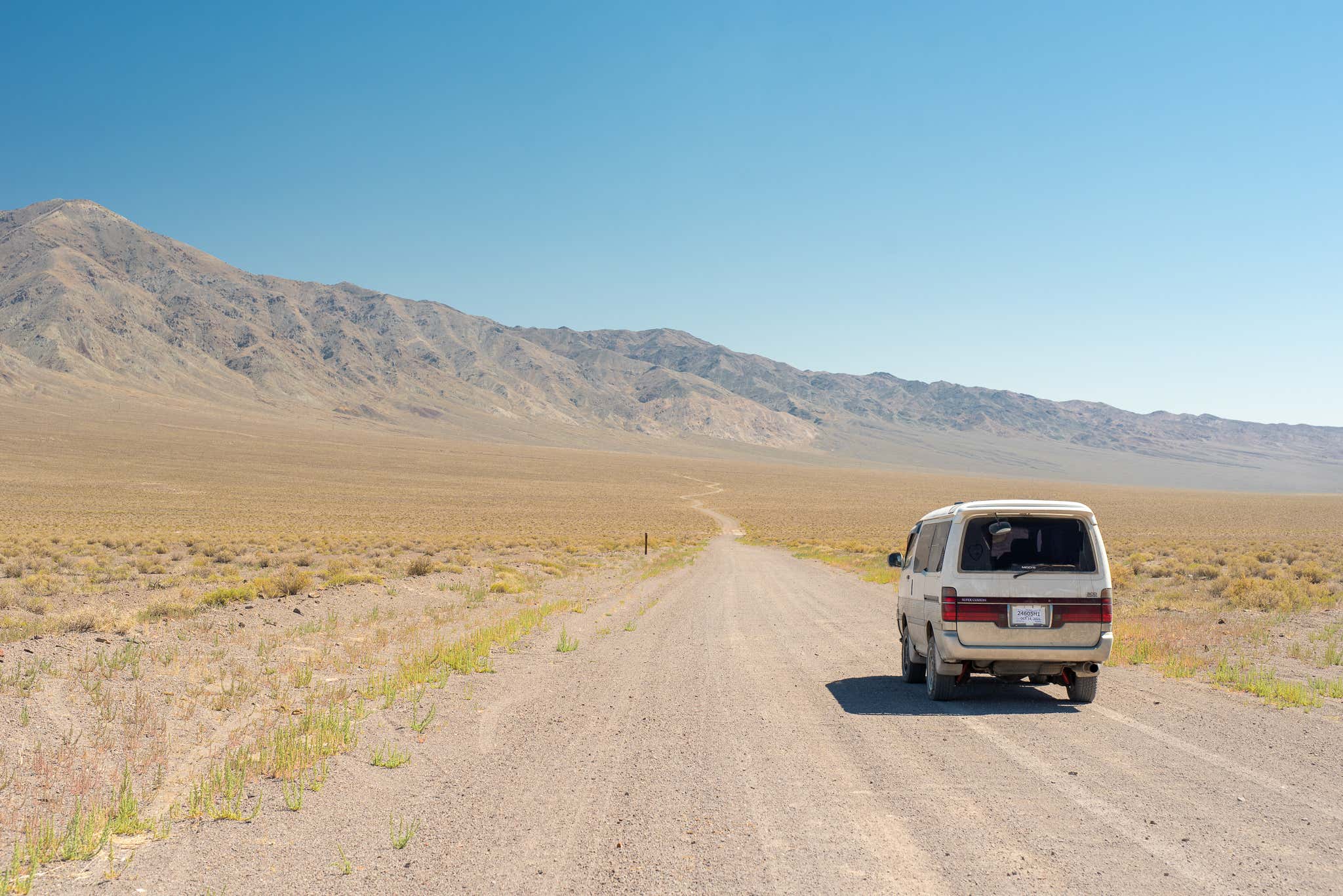 And with an infinite stretch of sand in front of Marsha and an infinite sky above me, the powerlessness that caused me anguish in Los Angeles became a source of strength in the desert. As I blasted along stretches of 95, I found an intriguing mountain trail that snaked through a canyon miles in the distance and that my maps told me led to a 9,200-foot mountaintop, an entire mile over the desert floor I was driving on. I, of course, headed for it.

I had nowhere to be, and I still love to summit mountains, and with Marsha’s new impressive lift kit, she can make short work of trails that used to be a struggle. I wound through canyons in awe of the beauty, diesel steadily chugging up the 10-percent or so grade as I drove vertically nearly a mile in the span of 10. 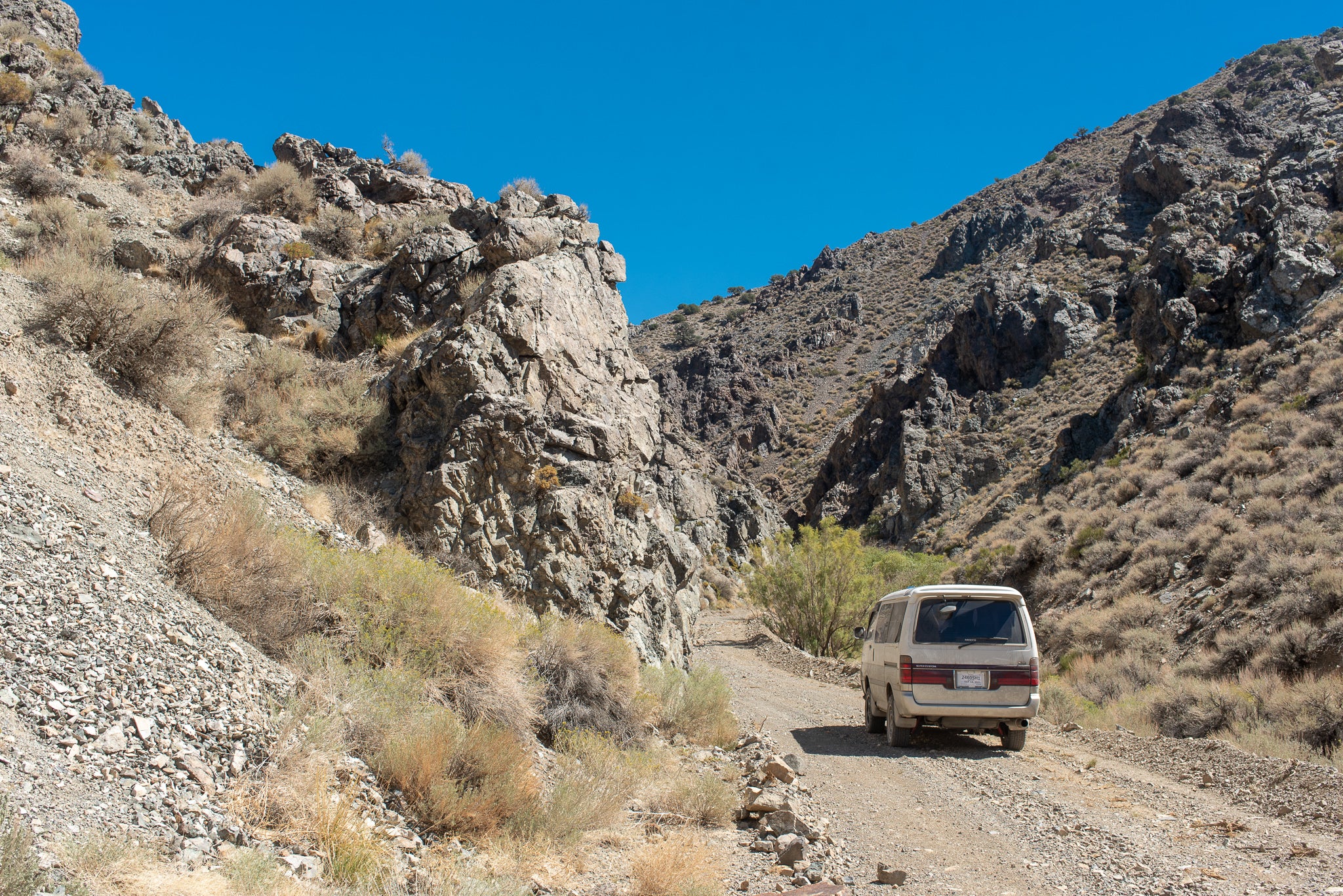 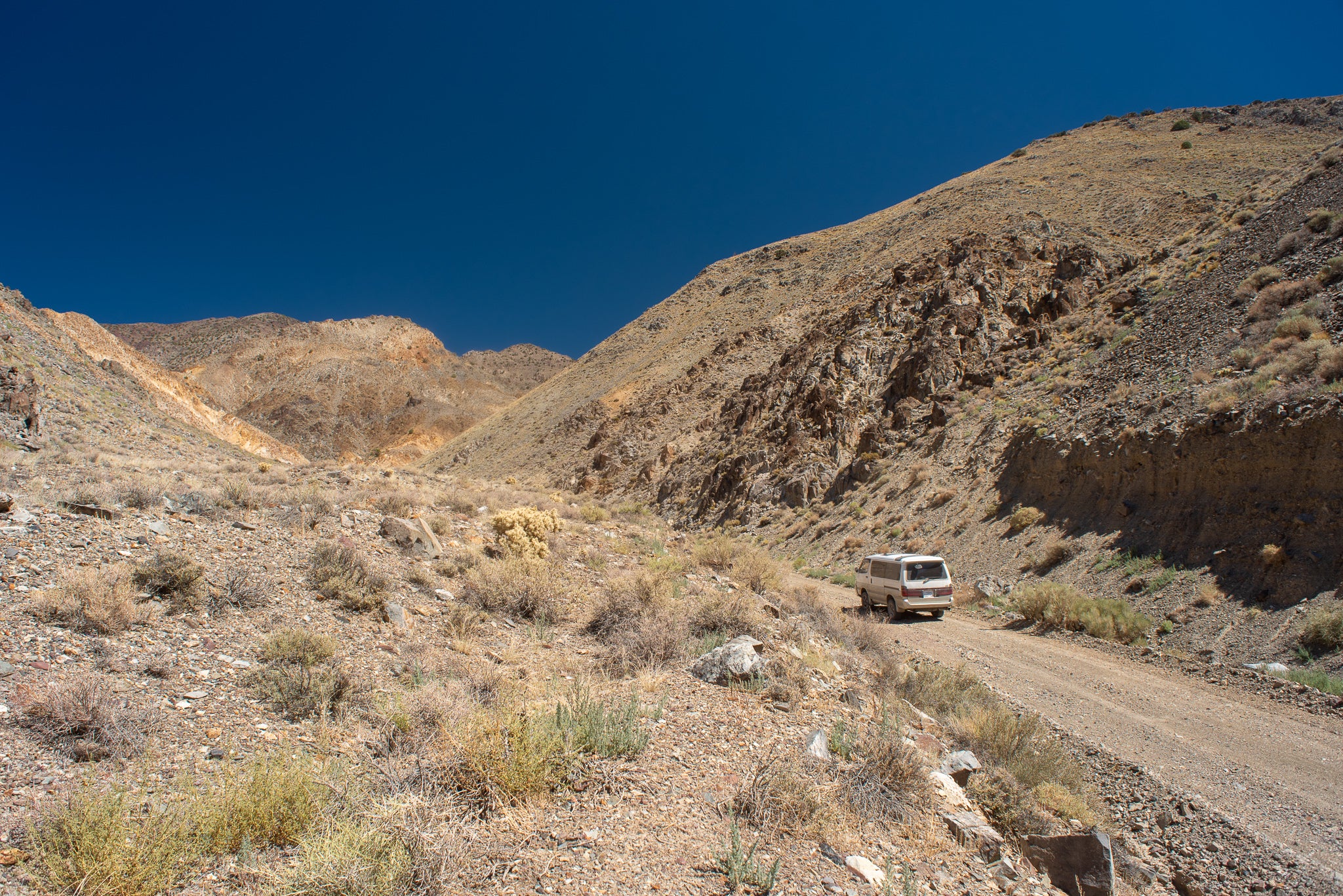 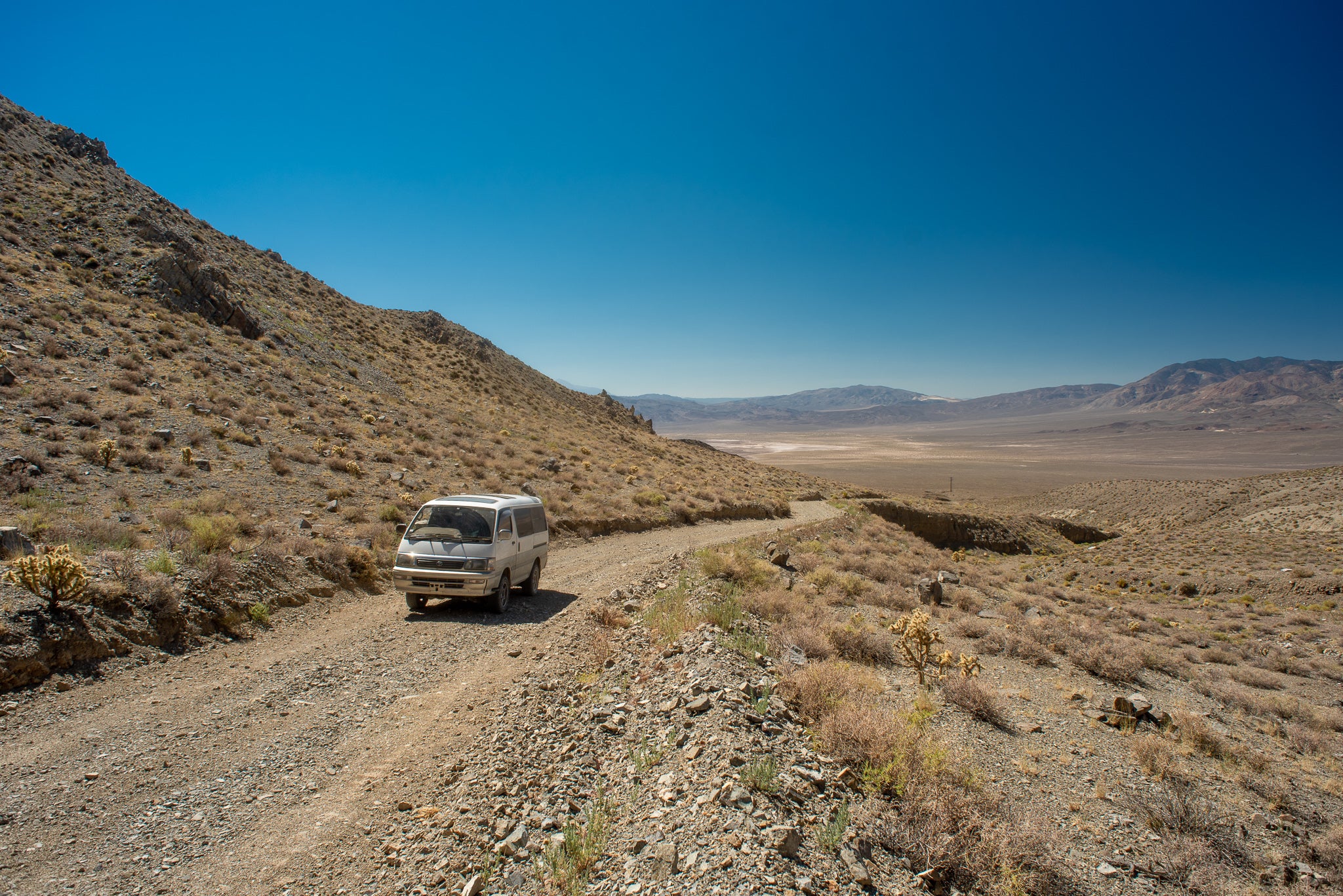 As I approached the top—and the views and feeling of success it promised; I hadn’t summited a mountain since Cuyama Peak, and we all know how that went—the A/T temperature light came on. I had been ripping up the stony canyon road in low gear for so long, Marsha had finally started to overheat her transmission. I let her sit and cool, and pushed on. I rounded a bend, and I could see the peak ahead of me, beyond winding switchbacks, and the light illuminated again. I was tantalizingly close, and her light turned off fairly quickly after letting her sit in park. But I turned around, and drove back to U.S. 95. I couldn’t risk her again. 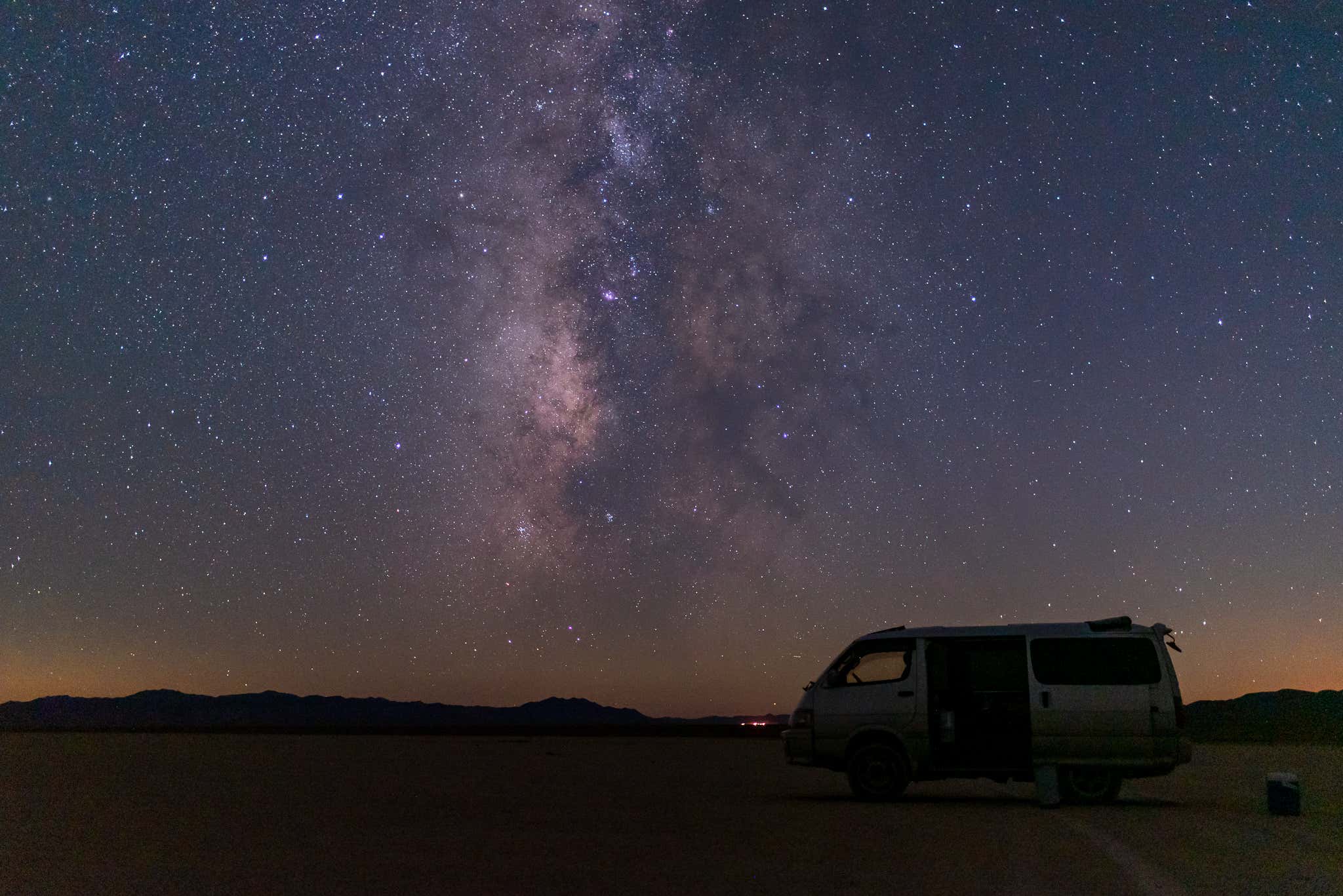 I left satisfied nonetheless despite my failure to reach the top. The mountain will still be there for as long as I and Marsha live. We can try again, or maybe we won’t; perhaps other mountains will call to us instead. No matter what the future holds, I cannot summit every mountain on one road trip, just as I cannot fix all my own faults in the span of one summer, or discover my fullest potential or true purpose through one series of stories. For the first time, I felt an undiscovered future before me, one that allowed me to falter and stumble before I found success, whatever shape that takes. And sometimes, powerlessness—and the beauty of it—is a good reminder that we can only do so much alone.

You can follow Victoria’s journey in real time on Twitter here. Got a tip? Send us a note: [email protected]