General Motors and Ford have taken decidedly different approaches to their electric trucks. Yesterday, Ford released its electric F-150, the Lightning. It’s relatively cheap for an EV at around $40,000, but its standard range of 220 miles is a bit lacking. On the other hand, GM’s new six-figure Hummer EV has a gargantuan 200-kilowatt-hour battery which guarantees 350+ miles of range, even if the truck weighs more than 9,000 pounds in its debut trim.

GM will come out with an electric version of its Silverado soon, but the company’s decision to debut the Hummer ahead of a mass-market pickup is an interesting one. Ford, in stark contrast, has yet to release a six-figure battery-electric pickup and its unclear if it ever will. As it sits, it’s halo truck versus handyman. 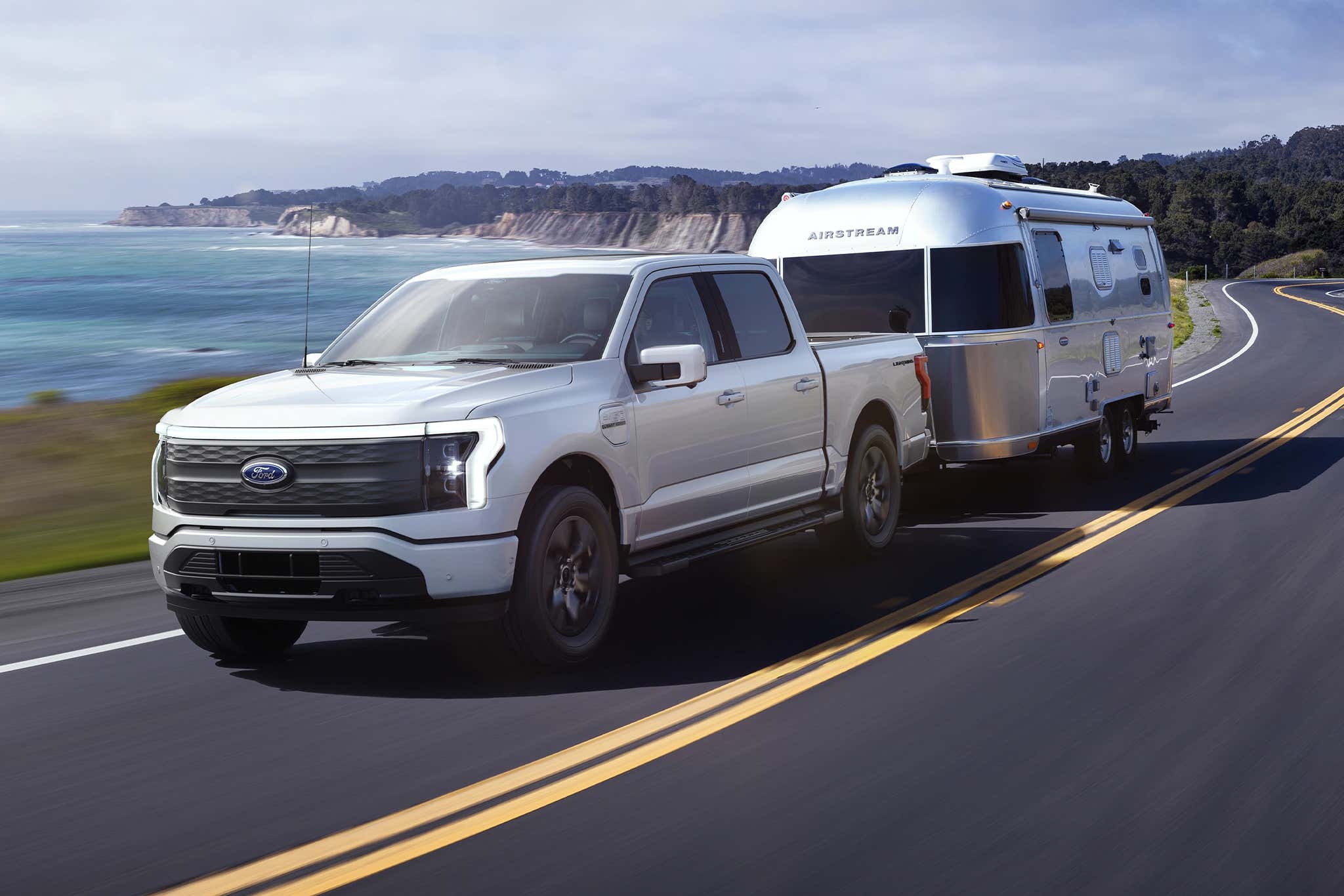 Reading the specs, you can see how different these two trucks are. It’s difficult to compare them head-to-head, but we can compare the methodology of the two company’s approaches.

The Hummer is nearly three-times the price of the Ford, although it has twice the horsepower of the base truck and isn’t marketed as a traditional pickup. It’s a pickup in form and maybe even by definition, which is why GM’s marketing refers to it as a “super truck.” It’s far from a work vehicle, though, and as such GM claims it will hit sixty in just three seconds despite its reported 4.5-ton curb weight. Its 200-kWh battery is also the largest of any passenger EV yet. 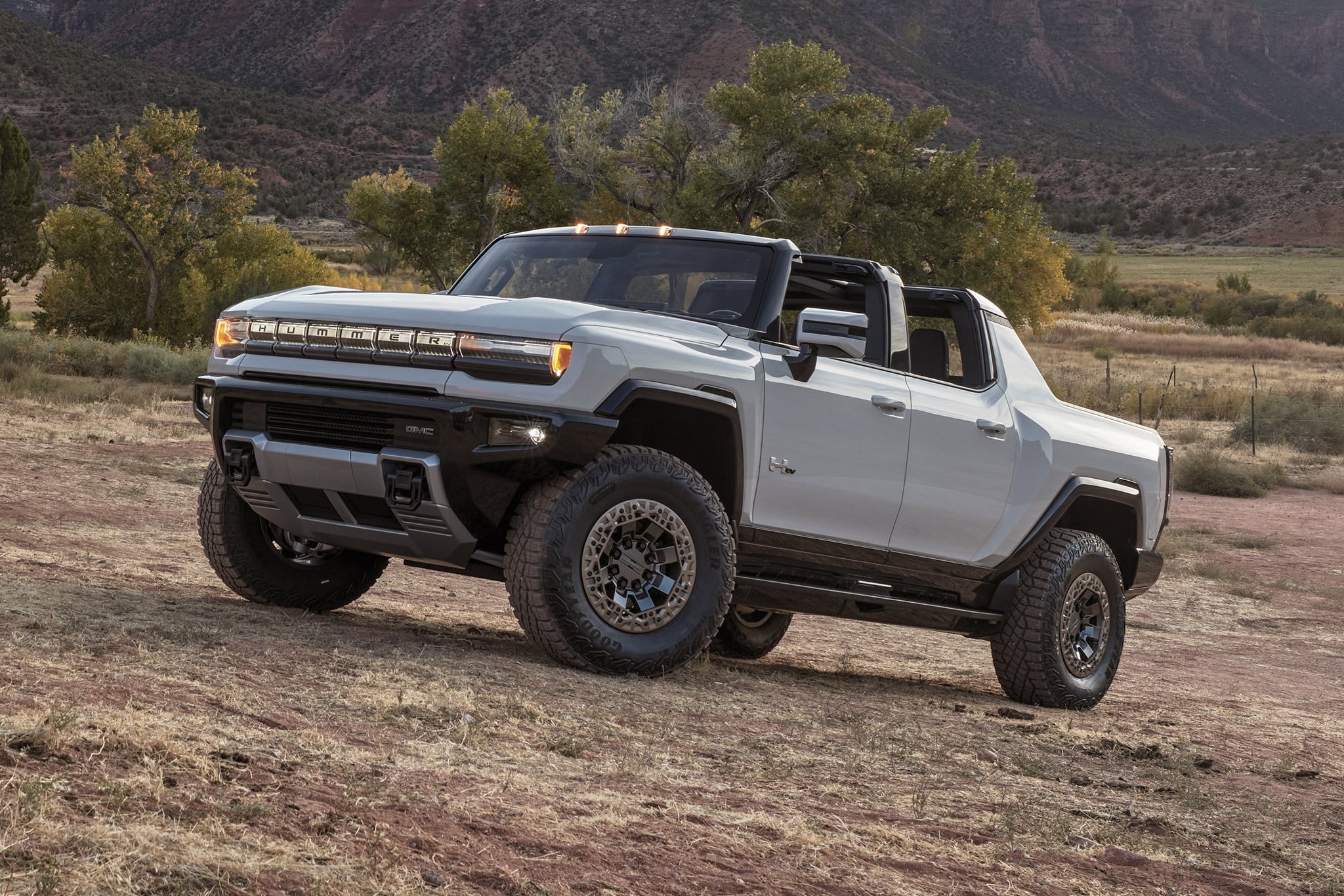 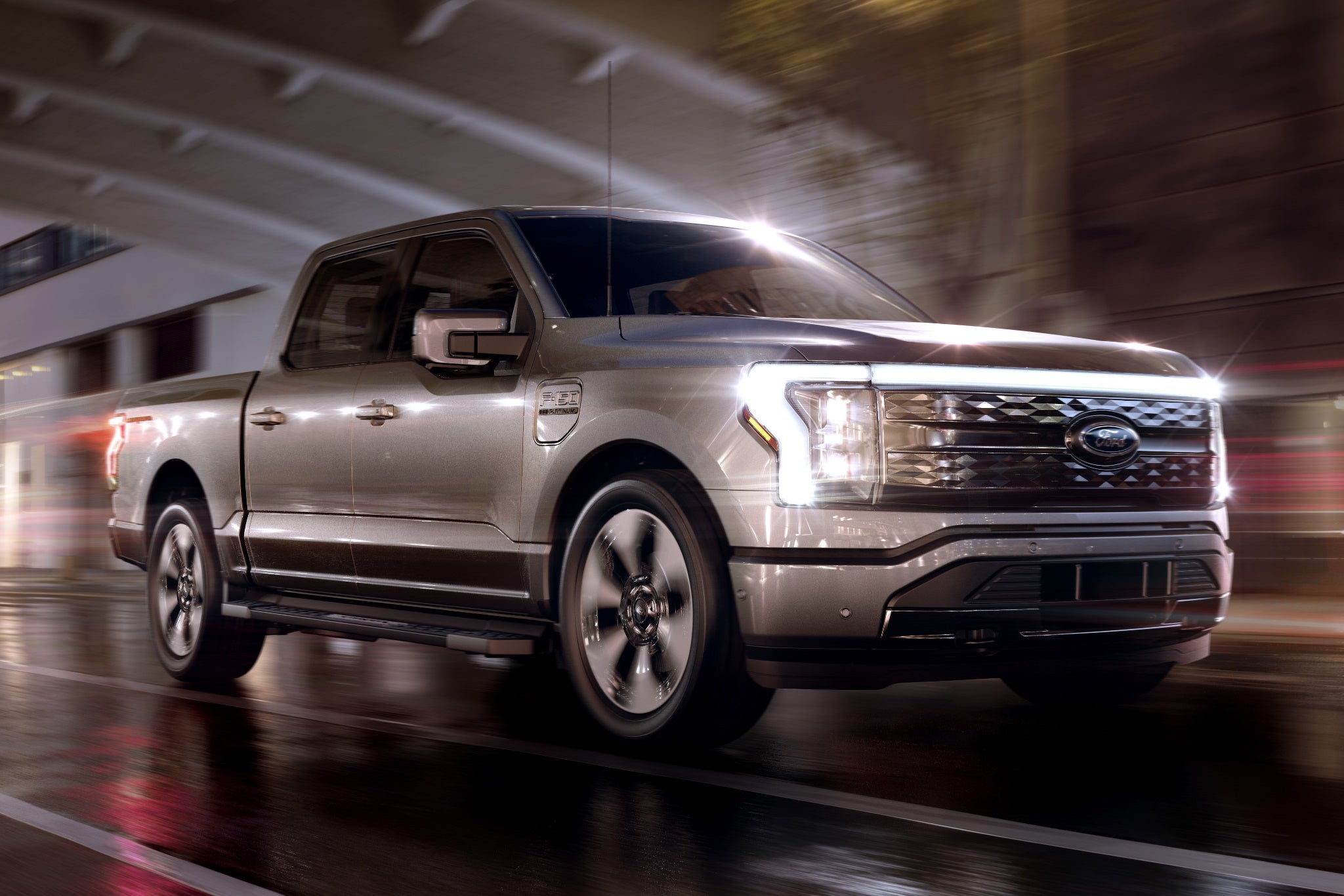 Choosing a high price tag for your debut EV products is nothing new, of course. Electric drivetrains are still expensive compared to those found in conventional, internal-combustion-powered vehicles. Tesla laid the groundwork for offsetting the cost of the electric drivetrain by packaging it in a higer-margin luxury car, the Model S. That may well be what GM is trying to do here. The company is investing billions in EV development, so a return on that investment would be welcome sooner rather than later.

That’s not to say GM can’t make a cheap EV—the company just isn’t doing so in the country’s most popular auto segment. The latest Bolt starts at $31,995, nearly ten grand less than the F-150 Lightning, and it’s clear GM has a lead on battery tech. After all, its first battery-electric car, the first-gen Bolt, debuted in 2016 a full four years before Ford’s first mass-market BEV, the Mustang Mach-E. 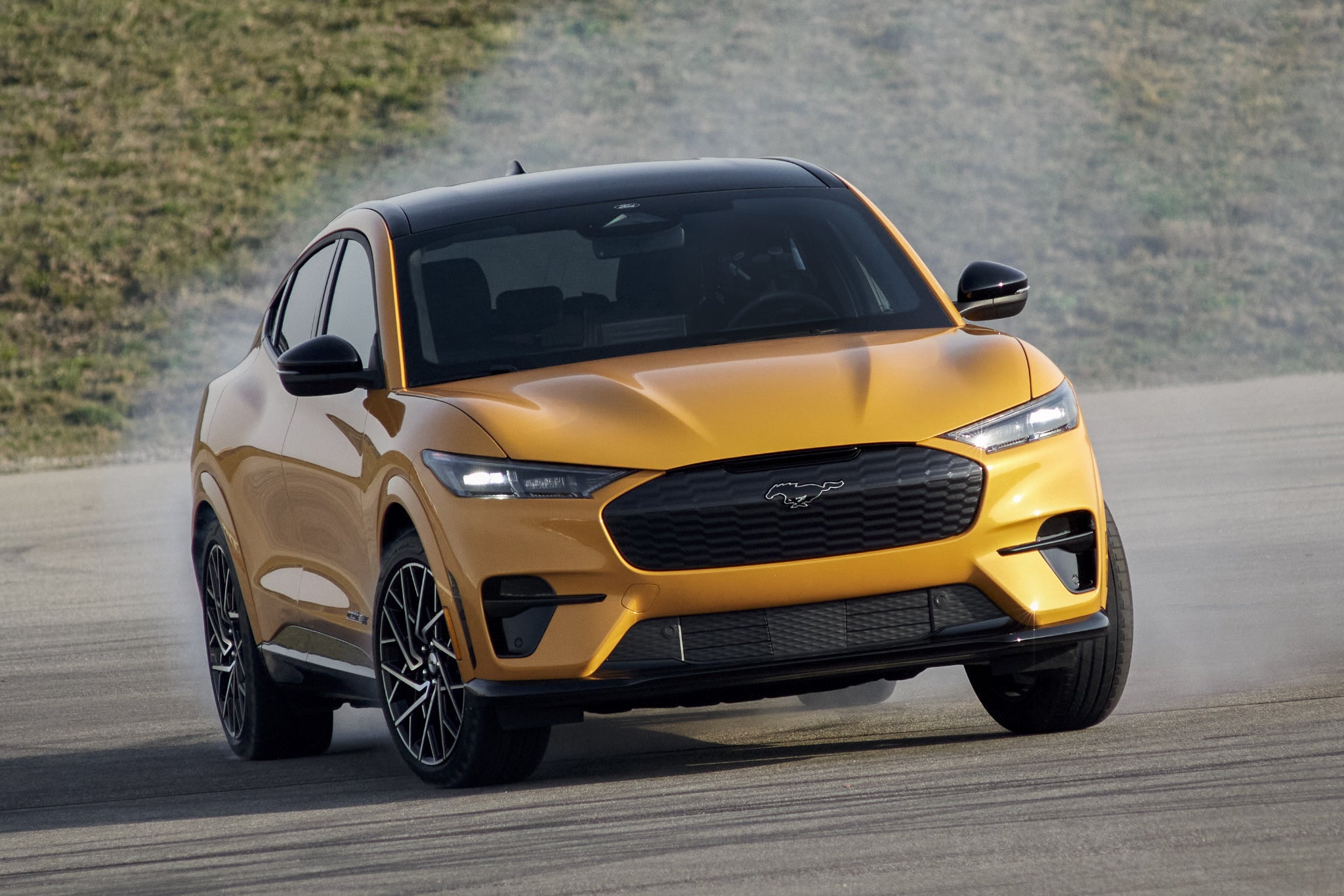 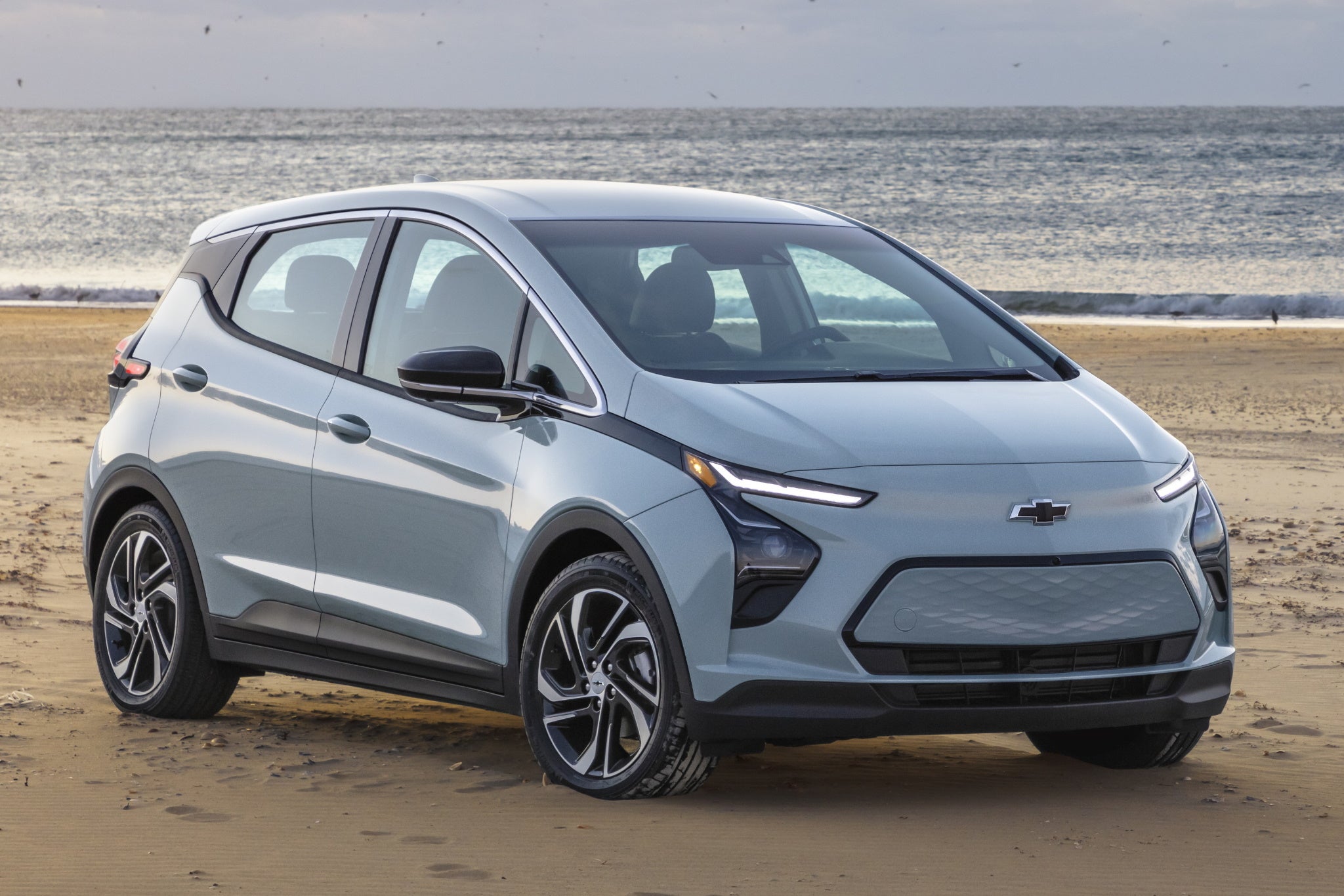 And as the Dearborn automaker’s second attempt at an electric icon, the F-150 Lightning has some of the typical growing pains; relatively short range and a curb weight that’s doubltlessly nearing or above 6,000 pounds, to name a few. The price is impressive, though, and the gas-powered F-150 is the best selling vehicle in the country, period. Even convincing a small quantity of potential F-150 buyers to purchase the electric model could mean a large number of units sold.

The electric F-150 also has a slew of options and trims above the base model, so the margin is there. You can spec one up all the way to $90,000 and people like expensive trucks—that’s a fact. The take rate for higher-trimmed Lightnings is yet to be seen, of course, although Ford describes the base model electric truck as just that: a very basic version of the vehicle. It’s unlikely regular truck consumers will be pleased with a short electric range and limited amenities so they’ll splash for the luxuries that usually come with high-trimmed F-Series pickups.

The real head-to-head test between the two automakers will come when Chevy unveils its electric Silverado. It’s claimed to have a 400+ mile range, which while likely boosting the price, would also make it more appealing. Consider also that, while the cost may be higher, that difference in monthly payment might not be too extreme if financed. In the meantime, though, it’s interesting to watch various automaker’s approaches to riding the EV wave.