The EQS will be the model that will be coming to India immediately, and the EQB Crossover is expected to follow later this year.

BHPian vb-san recently shared this with other enthusiasts.

In the not-so-distant past, we used to say that EVs are the future, and before we could realise it the future has arrived. Major auto manufacturers have jumped onto the EV bandwagon and technological advancements are so rapid that the high initial cost, range anxiety, and lack of infrastructure are becoming a thing of the past. Governments and administrations across the globe have introduced incentives and support schemes to accelerate the cause and have set ambitious EV transformation targets for the next decade and beyond. The current geopolitical scenario also majorly plays to the need for electrification and less reliance on fossil fuels.

Mercedes-Benz has been leading the luxury auto industry in India for a while, and now they are looking to cement their position by deep diving into the luxury EV space in the country. The launch of their flagship EV, the new EQS, is just around the corner, and the company expects to create a new benchmark in electric mobility with this locally produced model.

As a prequel to the launch, Mercedes India organized a special media experience program in Stuttgart, Germany for us to have a glimpse into their future – a tour of Factory 56 (what they call the Factory of the Future), Mercedes-Benz Museum, interactive sessions with their experts, and a short drive of their electric cars – the soon to be launched EQS, and the EQB, which is expected to arrive later this year.

The event took place from July 4 to 6, and the agenda was as follows*:

*Please click on the hyperlinks for accessing the respective sections.

The flight from Singapore to Stuttgart (via Frankfurt) was pleasant and uneventful and I reached the hotel around mid-day on July 4. It was not the case for the other participants though – delayed flights, changed connections from Frankfurt/Munich, lost baggage, it all was happening. Lufthansa did its best to make the trip a memorable one for them. To their credit, the folks received their missing baggage, right on time before their return flight.

This was our base for the next three days – Le Meridian Stuttgart: After a quick intro and lunch, we set out for the Factory 56 visit. At the entrance we were briefed about the rules and expectations – strictly no use of mobile phones or cameras, not to block the way, or hinder the movement in the assembly line. Mr. Michael Bauer, Head of Production Mercedes-Benz plant Sindelfingen, gave an insight into Factory 56 with a wonderful presentation and then guided us through the factory tour. He was extremely patient and answered all the questions during the tour. For me, personally, the Factory 56 visit was the highlight of the trip.

Note: As photography at the factory premises was prohibited, all photographs used in this section are provided by Mercedes Benz. Michael explained in detail, the key guiding principles they follow at Factory 56 – Flexibility, Digitalization, and Sustainability. One key aspect I noticed about the factory was its people-centric approach. The assembly line work is often monotonous but the staff we encountered during the tour looked happy and always returned a smile. Michael further explained their human-centric approach with Factory 56:

A few more pictures to close off the Factory 56 visit: 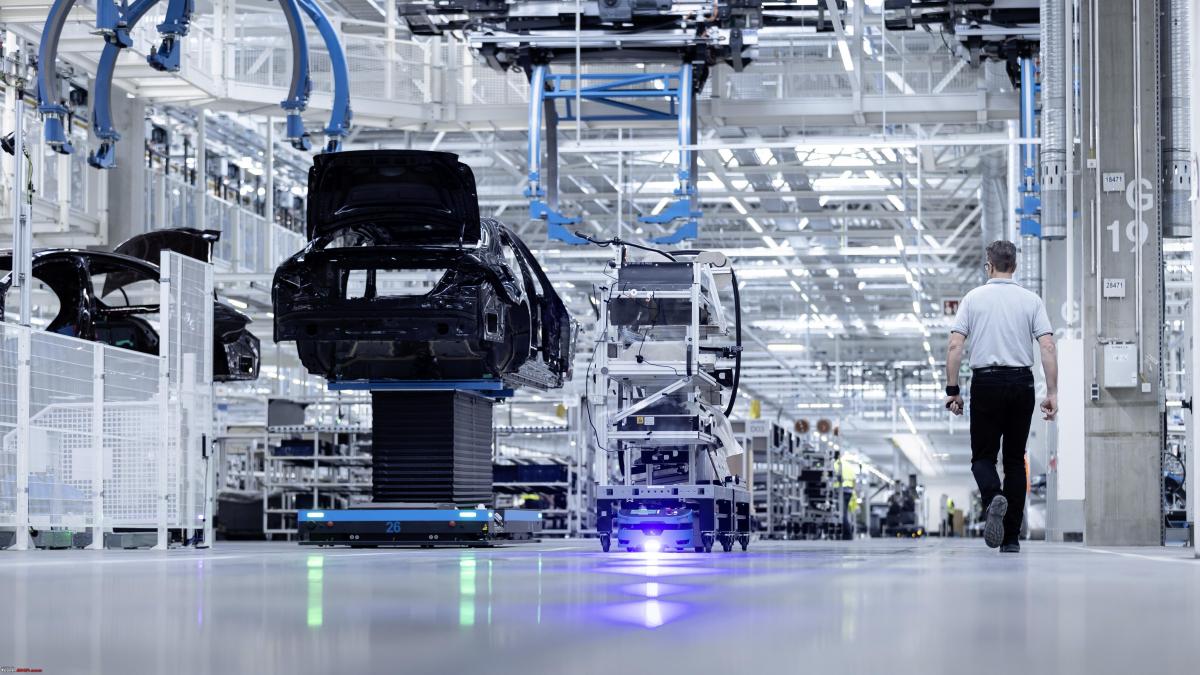 With the factory visit completed, and a short break to socialize, we were back on the bus to visit Mercedes-Benz Kundencenter (Customer Center) for a round table with Mr. Joerg Burzer, Member of the Board of Management of Mercedes-Benz Group AG, Production & Supply Chain Management.

Jeorg is a veteran at Mercedes-Benz and was extremely happy to explain what he sees as the future of Mercedes and how EVs and traditional fuel-powered cars can co-exist depending on the market and the infrastructure. Being a production guy, he sounded extremely happy and proud of Factory 56 in particular, and how the same production model can be replicated in their factories worldwide (e.g. in India). Currently, European/continental cars have a generation lifecycle of 7-9 years with a mid-life facelift thrown in between, and one of the questions asked was, if he foresees a change in that with the fast-paced technology changes happening, especially with the EVs – battery technology, user interfaces, etc. He replied that the future of cars looks to be driven more by software than hardware and frequent OTA updates will be a norm (like in the case of mobile phones). Aligned to that thought, I would even think that we may see new versions of cars launched every year (or every alternate year) – say like Apple product launches.

The interaction was short (just around an hour) as Jeorg had a flight to catch, but it was time well-spent indeed.

A few shots around the Kundencenter. I believe it will be quite an experience for customers to take delivery of a new car from this facility.