There is a mild rattling sound coming from the AC vent speed knob and the instrument cluster glass panel.

BHPian krishnakumar recently shared this with other enthusiasts.

It has been just over a year since we got Yoda home. Our car has now completed 12,500 km. I’ll keep the updates short and sweet.

Overall, the ownership experience continues to be great!

What happened to the issues that I had reported earlier?

“Whup whup whup” sound while releasing throttle at around 40kph speed: I had posted this but didn’t see many others facing a similar issue.

Well, this issue continues to be there. And even after long highway test drives with the technical team from the service center (and replicating the sound multiple times), they weren’t able to spot anything abnormal.

The ongoing hypothesis is that it is just the sound of pressure against the valves when the throttle is released, and nothing to be worried about. Since it doesn’t affect the driveability, I have let this thing slide for now.

The issue is 80% fixed. The service center acknowledged the problem and said that there is a recall (or rather addition) of the part which has been recommended. The issue seems to be the cable connecting the gear lever to the gearbox. They claim to have added some tag on this cable in my 10,000 km service that’s supposed to fix the problem. Currently, there is some vibration at 65kph, but this vibration is 50% less than what it used to be. Moreover, beyond 65kph there is no vibration, while it was there earlier. So overall, the issue seems to be largely resolved but could get worse.

A mild creaking/squeaking noise from the driver-side door pad/b-pillar – can’t exactly place where!

Well, thanks to Anant Poddar’s post, I was able to fix it using some packing foam sheet.  As shown in the circled portion in the below pic, I just stuffed some packing foam sheets in the gaps between the rubber boot and plastic trim. Seemed to have done the trick. Not the tidiest of jobs I agree but it is functional for now. The issues highlighted were all resolved but they took a full day due to the gear lever vibration issue.

Also, the car came back with the panels around the gear lever not properly fixed. I didn’t want to try to fix it myself and develop a crack on the panel so took it back to get it fixed. One thing to note with Mahindra service is that it’s best that you go pick up the car after the service (instead of a drop off) so that some of this QC can be done by ourselves. Needless to say, the job could’ve been done better.

Notice the shoddy workmanship by the service center. Didn’t even bother to check if things were fixed properly. It took 2 seconds for the technician to fix it properly and ~1 hr wasted for me. Not that I could not have fixed it myself but that’s not the point. 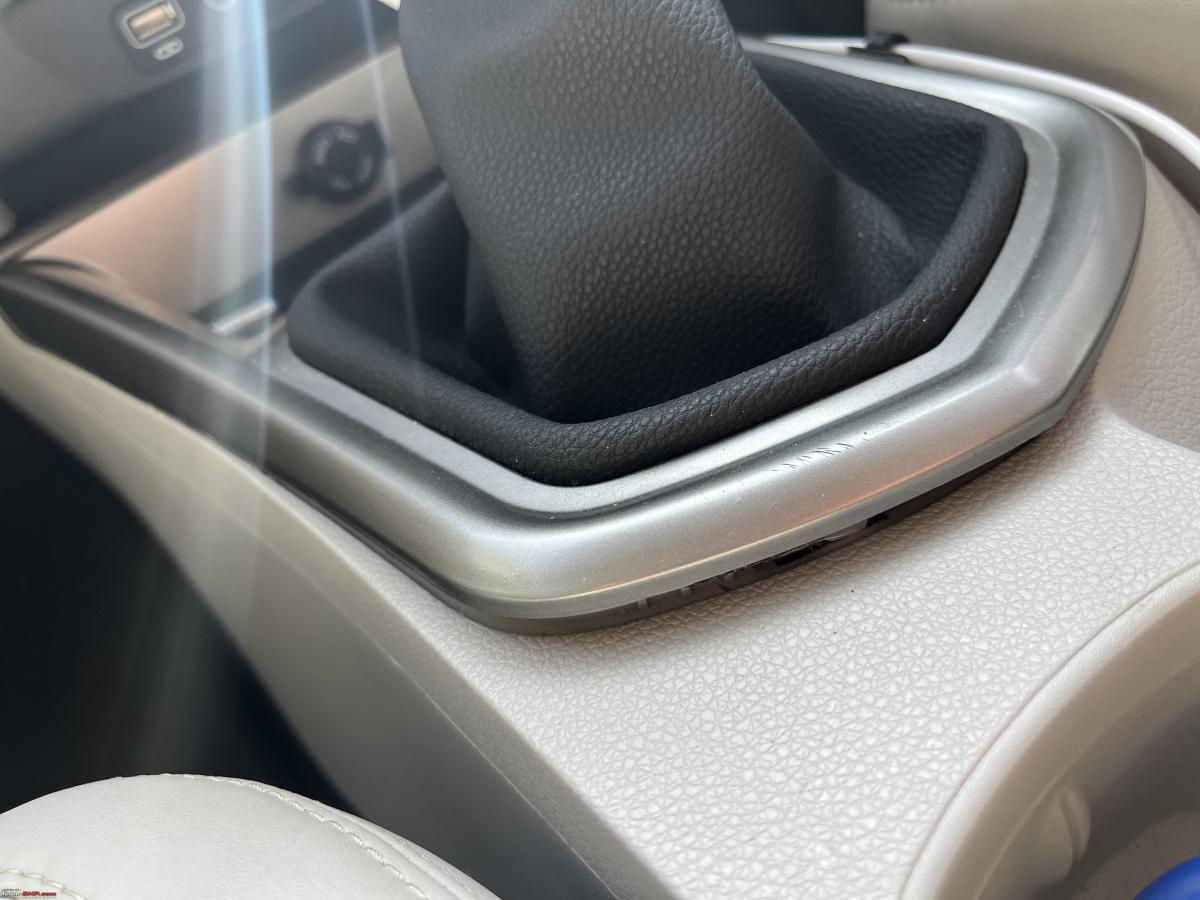 That’s all for this update. Here are some recent pics of Yoda from a trip to Kerala.

Somewhere along the paddy fields in a small village in Thrissur. This is my wife’s ancestral place. Taking some rest below a huge Peepal tree next to a temple in Palakkad.