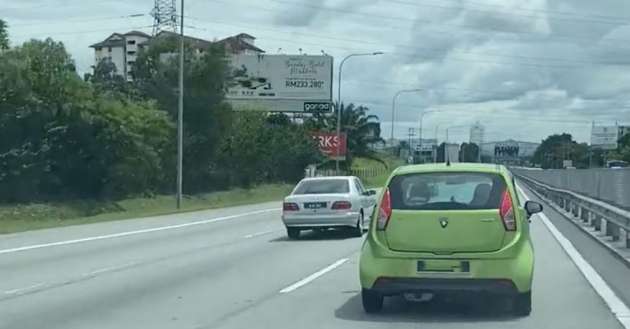 We’ve been there before – the driver of a vehicle ahead of you suddenly hits the brakes, and before long, it appears that the road ahead was clear, and there was no good reason for them to abruptly slow down. In essence, this was the situation faced by Nurul Ilham Anwar, daughter of Malaysian prime minister Datuk Seri Anwar Ibrahim.

Known as brake checking, the act of abruptly applying the brakes in cases like this one has less to do with ensuring the brakes on one’s vehicle are functioning as they should, and likely more to do with an act of retaliation towards another road user that has wronged or offended them in some way.

While Malaysian law does not address the act of brake checking specifically, this falls under reckless and dangerous driving, as described in Section 42(1) of the Road Transport Act 1987.

I don’t usually post these things but I was bullied on the road today. ??This car kept on pressing the brakes on the fastest lane. Super dangerous and I had my 2 year old with me. Was there for a good 1 minute before she (yes, she) changed to the next lane. pic.twitter.com/dBFli21eHU

This states, “Any person who drives a motor vehicle on a road recklessly or at a speed or in a manner which having regard to all the circumstances (including the nature, condition and size of the road and the amount of traffic which is or might be expected to be on the road) is dangerous to the public shall be guilty of an offence and shall on conviction be punished with imprisonment for a term not exceeding five years, and to a fine of not less than RM5,000 and not more than RM15,000.”

Clearly, brake checking is dangerous and should not be done, and the outcome of misjudgement by any driver involved could result in other innocent road users getting collected by an out-of-control vehicle in the process.

Malaysian law has the tendency to put the blame on the car behind when it comes to collisions, so in this case the onus is on us to be able to provide evidence that the car in front is in fact driving dangerously.

Once again, a functioning dashcam would prove valuable in the event a police report is made, which then can be furnished with video evidence, especially if the following vehicle does not stop in time and collide into the brake-checking vehicle. Retention of evidence is key, therefore use storage that holds up to the rigours of Malaysian heat.

If you have yet to equip yourself with a dashcam, it would be a good idea to get one as soon as possible. It’s a wild place out there.