Classic Mercedes-Benz limousines tend to evoke images of mid-century royalty or heads of state, often waving to adoring crowds. But for every 600 Pullman that rolled out of the Mercedes factory in the 1960s and 1970, there were dozens upon dozens of slightly less glamorous limousines, the kind upscale hotels purchased to ferry guests to the airport or on shopping trips to the European cities’ boutique districts. And the kind that didn’t have V8 engines. W114 limousines performed these tasks. They were forerunners of the E-Class as it is called today, and the models that preceded the better-known W123 family.

But in a few weeks Historics Auctions in the U.K. is offering one now-rare 1974 Mercedes-Benz 230 Limousine with fewer than 63,000 miles on the clock.

The U.S. certainly received the sedan versions of the W114/W115 generation, but not the limo, as demand for these sorts of vehicles was sparse. And mostly being a hotel limo assured a lot of these were simply used up and thrown away. Offering seating for eight, the limo features a middle row of 2+1 fold-away seats that can be stowed in an upright manner or used as footrests by back-row passengers. 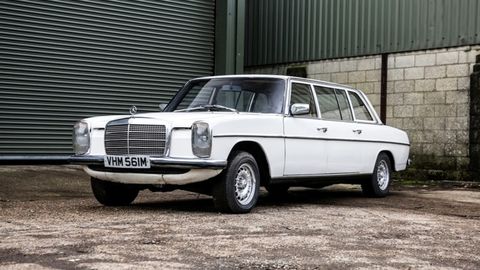 As you can see, this is not a mere “stretch” of a W114 sedan with an inserted middle section. Rather, the rear doors are square and everything after the B-pillar is new sheetmetal. So a coachbuilder would not have been able to repeat this design cheaply or easily because it involves new doors and window frames. However, this layout was also used on several later (and much more expensive) limousines by Binz GmbH and Carat Duchatelet, among others, all the way through the W140 generation of the 1990s S-Class. So the basic recipe of adding square rear doors and a new D-pillar lived on in other exclusive Mercedes limos for some time, until the W220 arrived.

The auction house says that this 1974 example, ordered in right-hand drive for the U.K., was first registered on May 1st that year. The limo was purchased with a white exterior over a tan leather interior, perhaps original on this car. But where it spent its early days is a bit of a mystery. The 230 is powered by a 2,292-cc six-cylinder gasoline engine, a mid-range offering in the W114 lineup at the time, sandwiched in between inline-four gas and diesel engines and more-potent six-cylinder offerings with higher displacement. 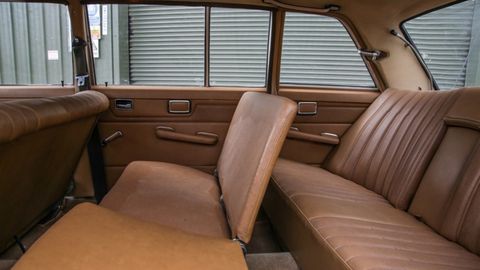 Historics Auctions says this limousine had been in a private collection and had been dry stored and continually maintained, at one point receiving an engine rebuild. Photos show moderate wear to the seats and interior, which could likely benefit from a professional cleaning and detail, but no major broken items. Photos also show plenty of dust inside, so perhaps some recommissioning work could also be in order.

The auction house estimates this 230 limousine to fetch between £6,000 and £11,000 on auction day, roughly a range between $8,200 and $15,100. Limos of this type have a niche following even though they’re not quite in the Pullman category, but more of a Volvo 264TE category. We’d expect a Mercedes collector with an eye for restoration could take this on as a project car, while the right-hand drive layout pretty much assures this example will stay in the U.K. 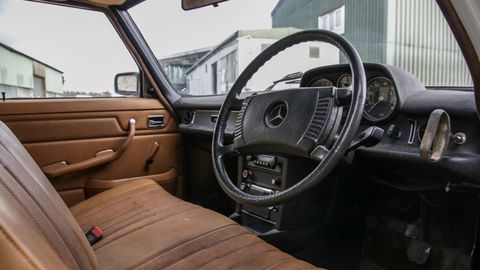 The wide estimate range indicates the narrower appeal of cars of this type, but if it lands anywhere near the low estimate the winning bidder could be getting a bargain that could use some polishing, and perhaps a repaint in a more compelling color. Originality is perhaps not a big concern here given the value of the car, but it would be nice to see this example brought up a few notches when it comes to cosmetic appearance.