Unfair though the 25-year import ban may be, it at least draws a clear line for what’s legal to import and drive in the United States and what isn’t. Until recently, that is, when Maine began canceling registrations for JDM Mitsubishi Delicas out of the blue. The problem only seems to be spreading, too, as it appears Rhode Island’s Division of Motor Vehicles is now demanding that owners of legally registered Kei cars surrender their plates for unclear reasons.

Alarm bells were first rung in the Ocean State by Revival Motoring podcast host Chuck Whoczynski, who received one letter for each of his two Kei cars in early August instructing him to contact the DMV. Whoczynski told The Drive he called the DMV’s Enforcement Office listed on the letters and was instructed to hand in the plates for his Honda Acty Kei truck and Daihatsu Mira TR-XX Avanzato hatchback— both vehicles that had been legally imported after turning 25 years old and have been registered for road use in Rhode Island for three and two years respectively. He claims he’s not the only Kei car owner blindsided by such orders, either, saying he’s “in contact with quite a few owners in the same situation.” 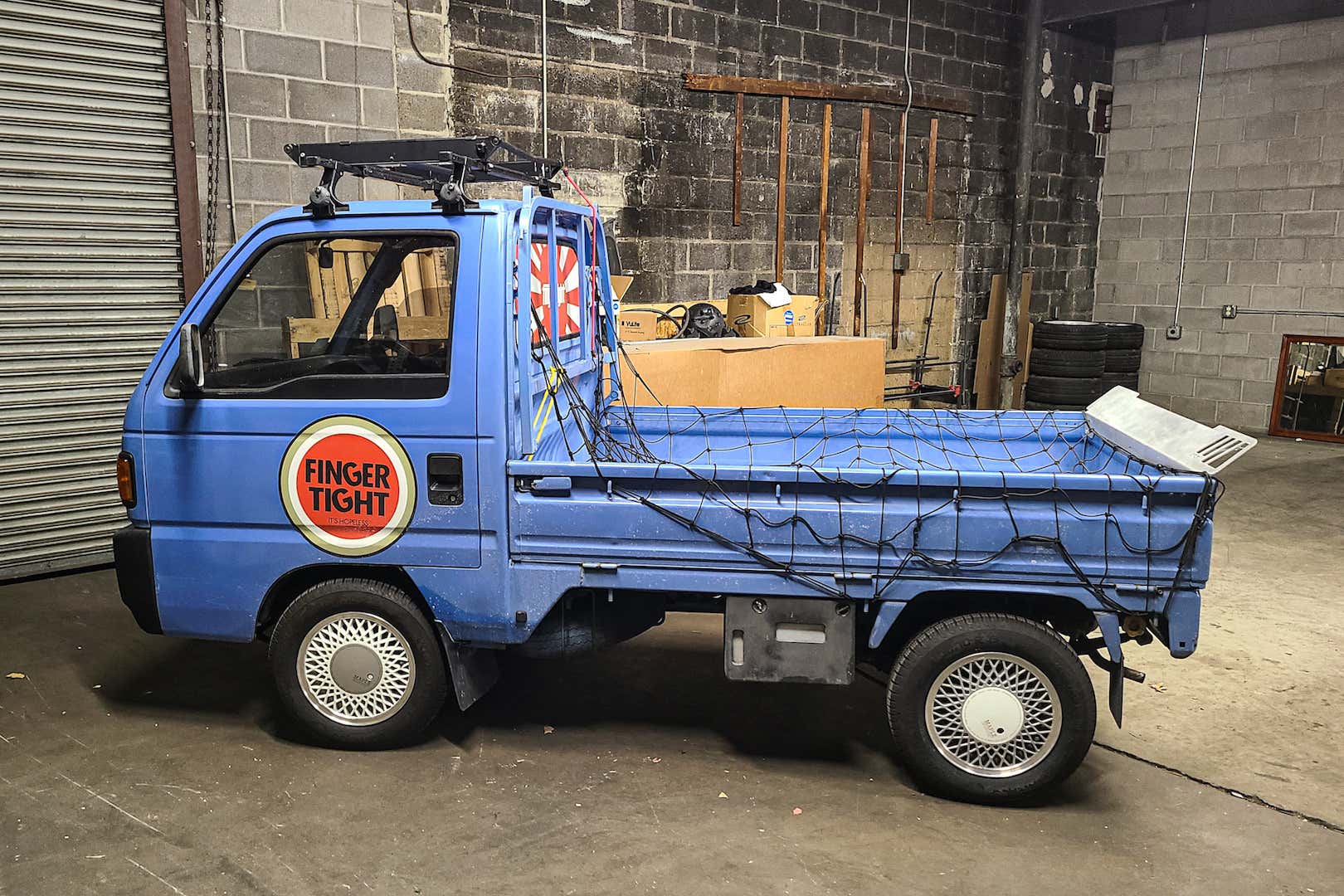 Whoczynski said the DMV justified the registration suspension by citing Chapter 31-19.4 of the state’s motor vehicle laws, which only regulates one region’s use of low-speed vehicles, though neither of Whoczynski’s Kei cars are registered as such. More strangely, the DMV official allegedly also referenced a document from the American Association of Motor Vehicle Administrators, a non-governmental organization that “represents the state, provincial, and territorial officials in the United States and Canada who administer and enforce motor vehicle laws.” Walter Craddock, administrator of Rhode Island’s Division of Motor Vehicles, also serves on the AAMVA’s international board of directors.

Said document was “Best Practice Regarding Registration and Titling of Mini-Trucks,” which advocates banning “mini-trucks” from highways if they cannot be proven to meet Federal Motor Vehicle Safety Standards. Only Whoczynski’s Honda falls in the category of mini-truck, however, and MiniTrucks.net and TFL Truck report that Rhode Island has no state laws restricting the use of such vehicles on public roads. 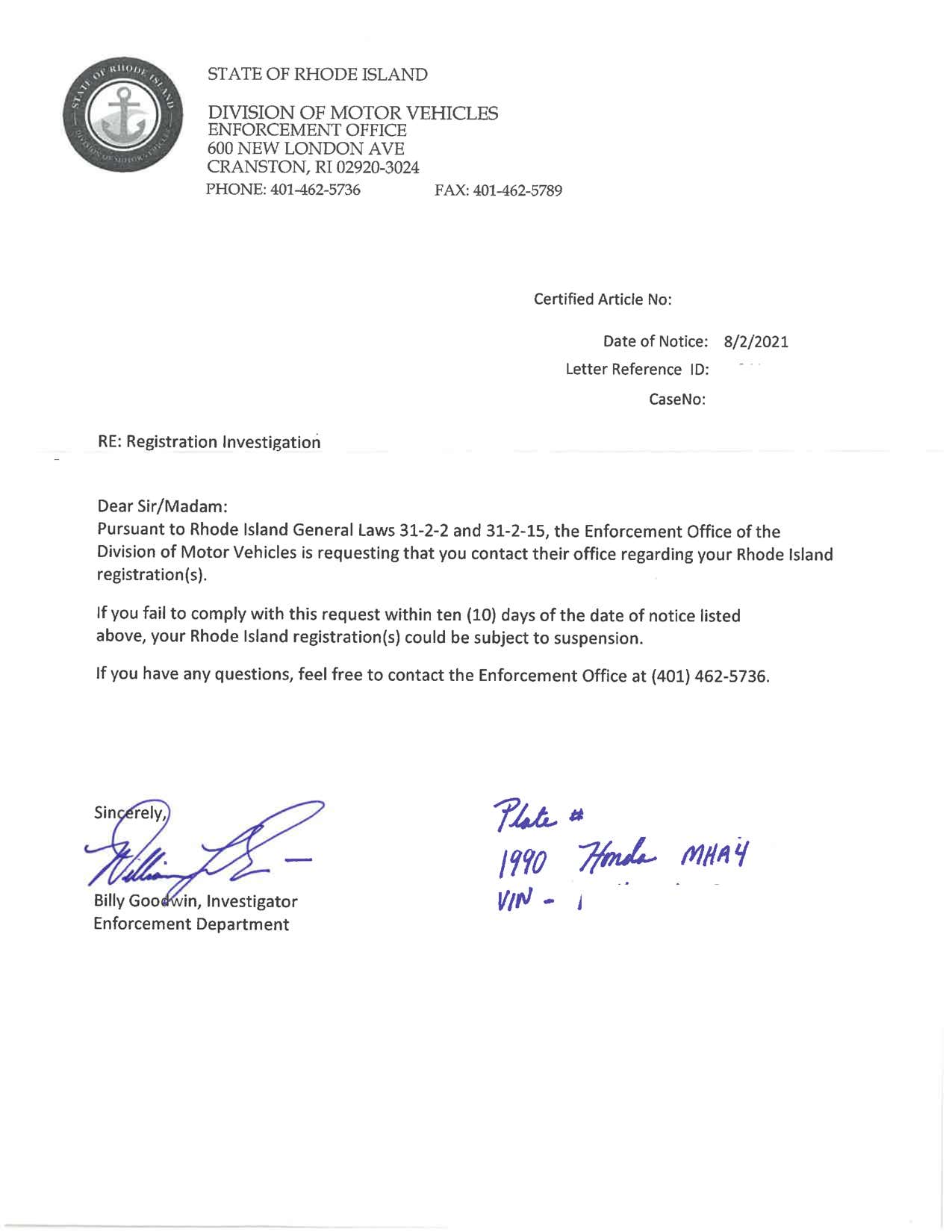 More light may be shed on the DMV’s rationale by an allegedly leaked internal memo, which Whoczynski claims to have obtained from a listener whose friend works at the DMV. The document purports the registration of “Mini-Trucks, Microvans, and Kei Cars” to be “prohibited in the State of Rhode Island,” invoking kei cars’ inability to abide by the FMVSS. Vehicles imported past the 25-year mark, however, are exempt from the FMVSS—so says the National Highway Traffic Safety Administration. 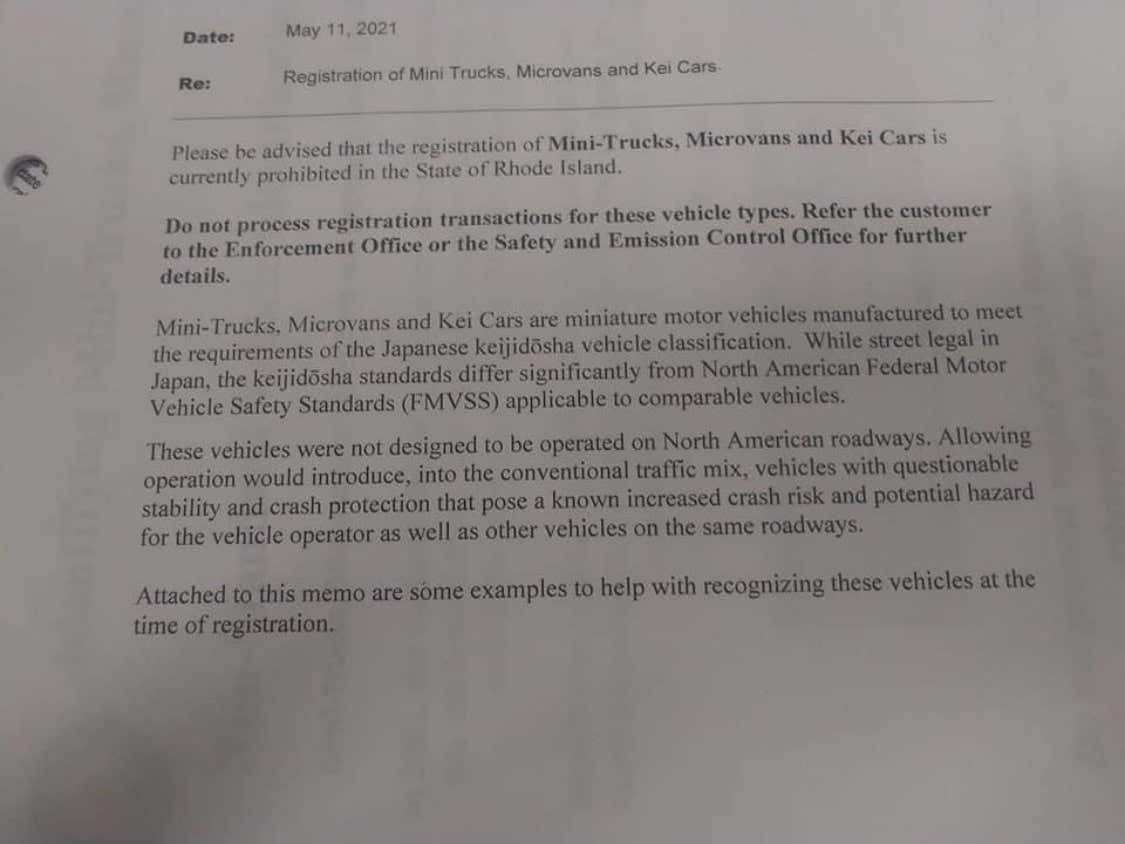 If everything we’ve heard is accurate, it would sound like someone at the Rhode Island DMV is trying to enforce the AAMVA’s recommended policy for mini trucks, using a combination of inapplicable local laws and the FMVSS. As outlined here, though, none of the DMV’s alleged justifications appear to have any legal backing. The Drive reached out to the Rhode Island Division of Motor Vehicles to determine whether it is actively canceling Kei cars’ registrations, and we will update when we receive a statement.

After speaking with two other Rhode Island Kei car owners, we’ve found this isn’t an isolated problem for Whoczynski. One man named Jeremiah, who purchased and registered a 1993 Daihatsu Hijet early last year, explained to The Drive that he received a similar letter from the state’s DMV. A copy was provided to us as proof, and Jeremiah added that he renewed his Hijet’s registration this July. The notice from the state was dated August 10, a little over a week after Whoczynski’s.

Steven Pina, owner of a 1991 Suzuki Carry, also showed The Drive his letter from Rhode Island’s DMV that was dated August 10. He purchased the mini truck in March of 2021 and registered it in April as an antique vehicle. Like Whoczynski and Jeremiah, he’d never before been questioned by law enforcement for driving the Kei, though his resultant in-person interaction with the DMV was allegedly pretty tense.

Jeremiah and Pina noted they had each spoken with the investigator who sent and signed their initial notices from the state. The former says they were greeted at the office’s door “like a criminal” while the latter said the investigator wouldn’t show him the supposed regulations he referred to, instead telling Pina to look them up on his own. This seems to have left them both with more questions than answers as they look for clarity in the state’s reasoning behind hoping to yank their Kei cars’ tags. 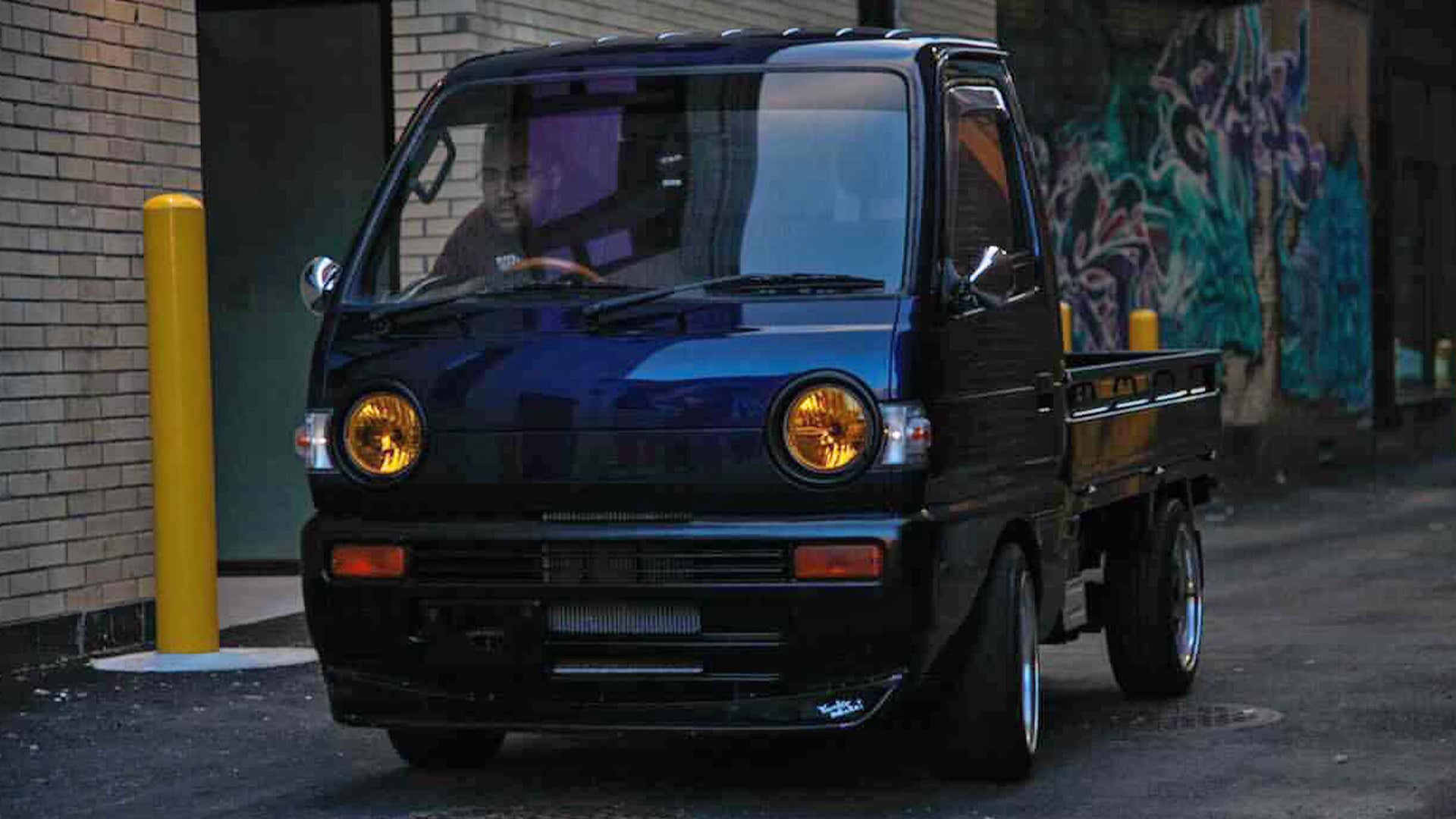 Rhode Island Kei car owners aren’t up a creek without a paddle, though. Chapter 31-2-19 of the state’s motor vehicle laws appear to allow aggrieved car owners like Whoczynski to appeal DMV decisions via a process that forces the DMV into a district court. Whoczynski tells us he’ll do just that when his suspension notices arrive in the mail. He also says he’s been compiling resources to help other Kei car owners in similar predicaments, which he plans to publish after consulting with a lawyer.

It seems as if Rhode Island Kei car owners are a ways off from solving their registration woes outright. Meanwhile, Delica owners in Maine are hoping to get their registrations reinstated after the state plainly canceled them, only sending a letter after the fact. Enthusiasts from the two northeastern states are left wondering why they’ve been specifically targeted for these legally obtained vehicles, and from here, it’s hard to answer that question. Just let it be clear that neither’s going down without a fight.

Has your DMV told you your imported car’s registration is no good? Drop us a line here: [email protected]