My new car is an XL6. A very nice car, buttery smooth and sleek. But on highways I sometimes miss the raw power of the Aria.

BHPian Roshith recently shared this with other enthusiasts.

Across the last 10+ years of ownership, the going has largely been good. She has taken us places across India – Pondicherry, Goa, Ooty, Coorg, Athur, Mugambika, Chettinadu, Kolli hills, Kodai, almost throughout Kerala – all the “big” family functions. My younger daughter after her birth came home in the car, my teary eyed elder daughter for the first time moved away to her hostel with her bulk of books and study materials in the car. When we were fortunate enough to build a second home in Kollam almost 70km’s away from Trivandrum where I stay – the Aria carried us in complete comfort with the last seat folded and a truck load of things, including a pestle set with nary a squiggle. She has never left us stranded anyway – even one of the infamous flood spells in Trivandrum was undertaken with elan. The Aria was a hot favourite among my colleagues too – from official trips to Kochi some countless weddings, food jaunts, baptisms, house warmings and what not.

I have been chastised, hounded and my car judging abilities pulverised to a pulp- the minute I decided to go for the Tata Aria instead of the favourites of those time like the XUV 500 and the all-time favourite Innova.

There used to be a polite silence when I drive up in the Aria which is my second car. We have an Ignis automatic too. If you have bought a Tata then people irrespective of their knowledge of things automotive feel somehow “qualified” to bad mouth your choice. If not anything else- it is the resale Value. Adjectives like Tata’s flop car, Tata trying an Innova, maintenance problems, rust issues, shoddy after sales service, resale etc. are bandied about.

The need for a new car:

We had a Bolero at that time. In three years, it had done around 35000 kms. Though it was a bullet proof vehicle – its brick like dynamics, not to mention that it was a bit tiring to drive especially over long distances made us look for a new car.

The Bolero was a tad done up with alloys, fender flairs and even a Hummerisque bonnet applique and Hella Rally lights which subsequently went into the Aria too. Of all the cars that I have owned, the Bolero was the one where there was almost nil depreciation for a three-year-old vehicle. I had brokers, acquaintances, friends queuing up when it was put on sale. The inability to keep up with triple digit speeds, lack of safety features, vibration and all convinced me to go in for a new car.

Since we had a smaller car in the house – at that time it was a humble Maruti 800 – we wanted a six or seven seater for the occasional long journeys and for those journeys when the in-laws or my parents would join.

Cars under consideration then – had looked at the Toyota Innova and the XUV 500 which was all the rage those days. I didn’t even need to test drive the Innova as it was known for its bullet proof reliability. But we couldn’t afford it back then.

The XUV 500 was seriously considered. We test drove the vehicle, but I thought it a bit gimmicky and “overdone” (no offence to owners of the vehicle). Also, had been hearing of some electrical gremlins in the initial batch of vehicles. Being in the advertising industry had noticed TATA Aria’s very slickly done TV and print campaign. It was christened as India’s first crossover. I liked the looks of the vehicle very much , though my wife said the front end looked like a TATA Indica cab. Test drive of the Aria was done at Das Motors and both me and my wife were impressed with the luxurious (at that time) interiors as well as the very high set seating positions. What impressed me the most was the smoothness of the engine or at least the perceived feel of it when you sit inside and close the door. It was truly built like a tank. My daughter liked the roof cubby pockets and the squarish designed interiors were also very interesting.

We were then sold on the Aria and decided to get it as we were offered a very good deal on the Bolero. I don’t remember the amount we got, but we got a very deal for the Bolero. In fact more than what we expected. Seat covers and the window roof guards were offered as freebies. I did the Teflon coating which was a “must have” accessory those days. We thus booked the Sardinia Red and I ordered the alloy wheels from the safari, as the Pure “Fabric” variant came with steel wheels.

The Aria was quiet a handful in Trivandrum city traffic, but on long journeys it was a literal locomotive and unlike the Bolero, one never feels tired even after a long stint behind the wheel. Even the passengers don’t feel too tired.

Many find it hard to believe but, in my 10+ years of using the truck, I didn’t have any major expenses. The TATA after sales service was the pits and after trying out two different service centres – I finally settled for an FNG near my office recommended by a friend whose Pajero Sport is also serviced there.

I shifted from fully synthetic oil to normal mineral oil after a few years but I made it a point to replace the oil every 5000 KM including the filters. Major expense during the total running in of 86,000 km was I had to replace the clutch assembly at around 45000 kilometers and the first set of tyres again at around the 45000 mark. The rear dicky support struts gave away and I think the replacement cost a whopping 8k. One of the injectors was also replaced during the warranty period after which they had to be again serviced and recalibrated at around 30000 km . The wiper assembly unfortunately gave up the ghost. A new assembly was again costly (around 18 to 21K if I am not mistaken), but fortunately my FNG guy came to the rescue and it was quickly refurbished . Apparently, the gears had worn out and the gear from a Maruti 800 was used for this. The drive shaft was also corrected at the lathe along with new bushes. The starter assembly had also developed a problem and it was again repaired at a fraction of the cost for a new one. Polishing of rotor, Ac clutch overhaul were some of the other problems encountered over the years.

Even I find it hard to believe, but unlike Tata horror stories that I came across – some in this forum itself, the Aria has been very dependable – not once has it ever failed on the road (a puncture and a weak battery were problems that happened while she was parked in the house and hence did not leave us stranded).

I think the fact that I used to get even a small squeak looked after and a no compromise outlook on changing the oils stringently also paid dividends. Spares were also very easily available and at the most there was a two or three day delay in sourcing some parts.

A few years back I had the seats replaced for more comfort. Other than that I have tried to keep most things as original as possible.

My new car is an XL6. A very nice car, buttery smooth and sleek. But on highways I sometimes miss the raw power of the Aria. She will be missed. She had taken us to so many places. 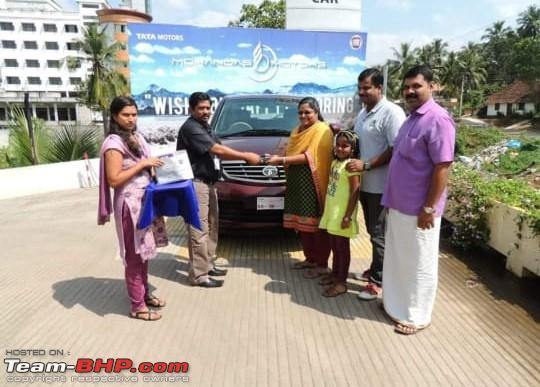