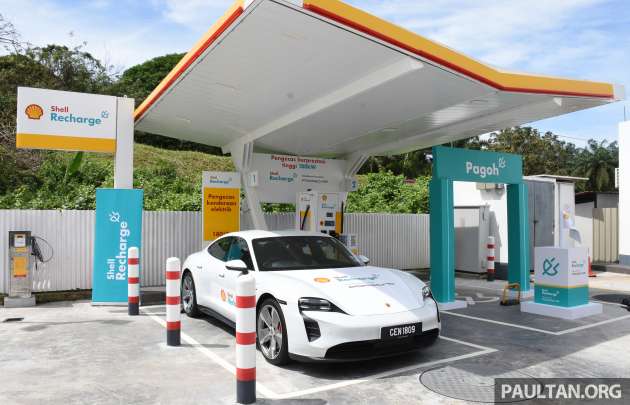 This would be accomplished by the implementation of the Shell Recharge network, consisting of 180 kW DC fast charging points at six Shell stations located along the North-South Expressway to seamlessly link up travel between major cities on the west coast of the country. 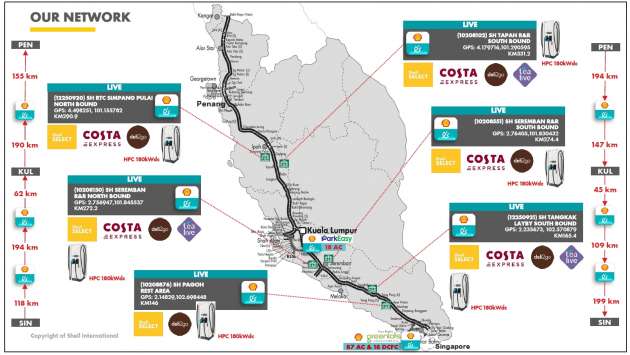 All six locations utilise ABB Terra 184 DC fast chargers, each with two Combined Charging System (CCS) connectors. While both guns at each charger are active, all the chargers in the network operate only with a single gun at any one time, as this allows it to output the maximum 180 kW output rate. The setup is due to the time-based payment structure that is currently in place for the network – utilising both guns at the same time halves the maximum power to each gun, to 90 kW each.

Three payment tiers are available for the network, either via a base pay-per-use service or through an exclusive membership plan, which will allow you to make a reservation for a charging spot for up to an hour before your arrival via ParkEasy’s mobile app, as well as a tier exclusive to Porsche owners. 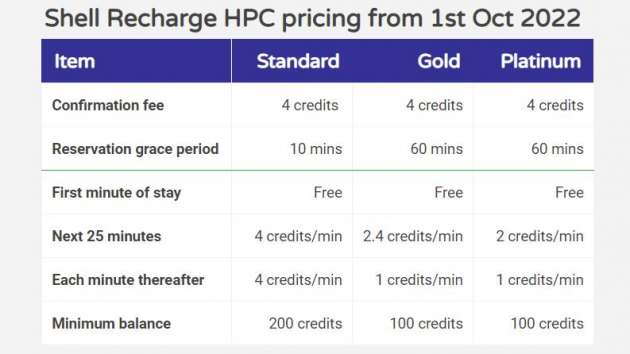 With the base level service that has no annual fee, the 180 kW charger is priced at RM4 per minute with a minimum ParkEasy balance of RM200 required before you can start charging. You can reserve the charger 10 minutes in advance, and can also collect BonusLink points when you recharge.

Shell Recharge Gold & Platinum (for Porsche) members can reserve the charger up to one hour in advance and charge at a cheaper rate of as low as RM1 per minute, but there is an annual membership fee to pay. For a complete breakdown of the charging rates available under all three tiers, read our previous story.

To officially launch the network and highlight its fully operational status, Shell Malaysia – together with Porsche distributor Sime Darby Auto Performance (SDAP) – replicated the road trip it carried out earlier this year when the Tangkak site was opened, but on a different route.

This time, it started from the newly-opened Porsche Centre Johor Bahru at Danga Bay to Kuala Lumpur before heading up north to Ipoh and then back to KL, stopping at the Pagoh, Seremban (north-bound), Simpang Pulai and Tapah charging points along the way.

The two-day journey, which covered more than 730 km in total and was accomplished in both Porsche Taycan 4S and Taycan 4 Cross Turismo demonstrators, ably showcased the network’s ability to provide coverage and top up the test vehicles well within the operational scope of a JB-KL trip (and subsqequently, up north).

For example, in the Taycan 4 Cross Turismo, we left JB with the battery at 98% (with 363 km range). By the time we reached the Seremban charge point, having covered 287 km, the battery was at 29% (with 114 km of travel left available).

The car was then recharged, but only to a 60% state of charge (offering 232 km of range) at a 90 kW rate at this particular location, the halving due to the need to charge more than one car and keep the stopover time low. In any case, the accomplished SoC was more than enough to get us into KL comfortably, without the fear of running short of juice.

Likewise, day two’s travel, where it showed that one could take a fully charged Taycan out to Ipoh and back with only one quick recharge needed, if you were simply doing a day trip. Pushing further on, towards Penang, would see the need for Porsche owners to rely on the network at Porsche Centre Penang to juice up.

With the Shell Recharge HPC network in place, Johor to Penang (and vice-versa) is easily accomplished, and while that remains the upper limit of the reach right now, scope expansion is on the cards, according to the company.

While no details were revealed, coverage to the eastern board of the peninsula and northwards beyond Penang seem the most logical points, given that it was mentioned at the drive event that the Recharge network in Thailand is set to be fleshed out next year.

Additionally, the company told paultan.org that a move away from time-based, per-minute pricing to one based on kWh for electricity consumed, which makes for a pricing mechanism that is more consumer-friendly, is being looked into. No indication as to when this will happen, but such a move, should it come, would be pertinent in freeing up the second gun per charger, enabling more users to utilise the network.