The future won’t be measured in horsepower—it’ll be measured in kilowatts. Specifically kilowatt-hours, and that’s what Tesla and CEO Elon Musk are betting big on.

On Tuesday afternoon, Tesla hosted its annual investor’s meeting and its newly-christened Battery Day. Owners lined up in the parking lot of the Tesla assembly plant in Fremont, California (socially distancing, of course, one car apart) while listening to Elon Musk and his colleagues talk on stage about the future of the company and its products.

As with any major event emceed by Musk, it’s produced a ton of news to run through: promised breakthroughs in battery development and construction that could yield twice as much range, a new $25,000 Tesla, the imminent release of a Full Self-Driving beta and more. We’ll update this post as the evening goes. Let’s get started.

Tesla has a plan to halve its cost per kilowatt-hour. We’ll get into more about this later, but know that Tesla is already believed to have the lowest cost battery in the industry—and it plans to further halve that cost by creating an entirely new battery cell.

Stay with me here, because to understand what Tesla is claiming here, we need to nerd out a little. The Tesla Roadster, Model S, and Model X all use individual 18650 cells—the same kind found inside one of those chuckin’ cloud vapes that the young people love so much. The Model 3 and Model Y received 2170 cells, which have a volume around 50 percent larger than its predecessor and also delivers nearly twice the energy density.

Tesla’s current 2170 cell just looks like a simple cylinder from the outside. The battery is comprised of the cap (positive terminal) and can (negative terminal), and inside there are two tabs which connect the cap and can to something called the “Jellyroll”—the tightly wound internals which contain the anode, cathode, and separator between the two. 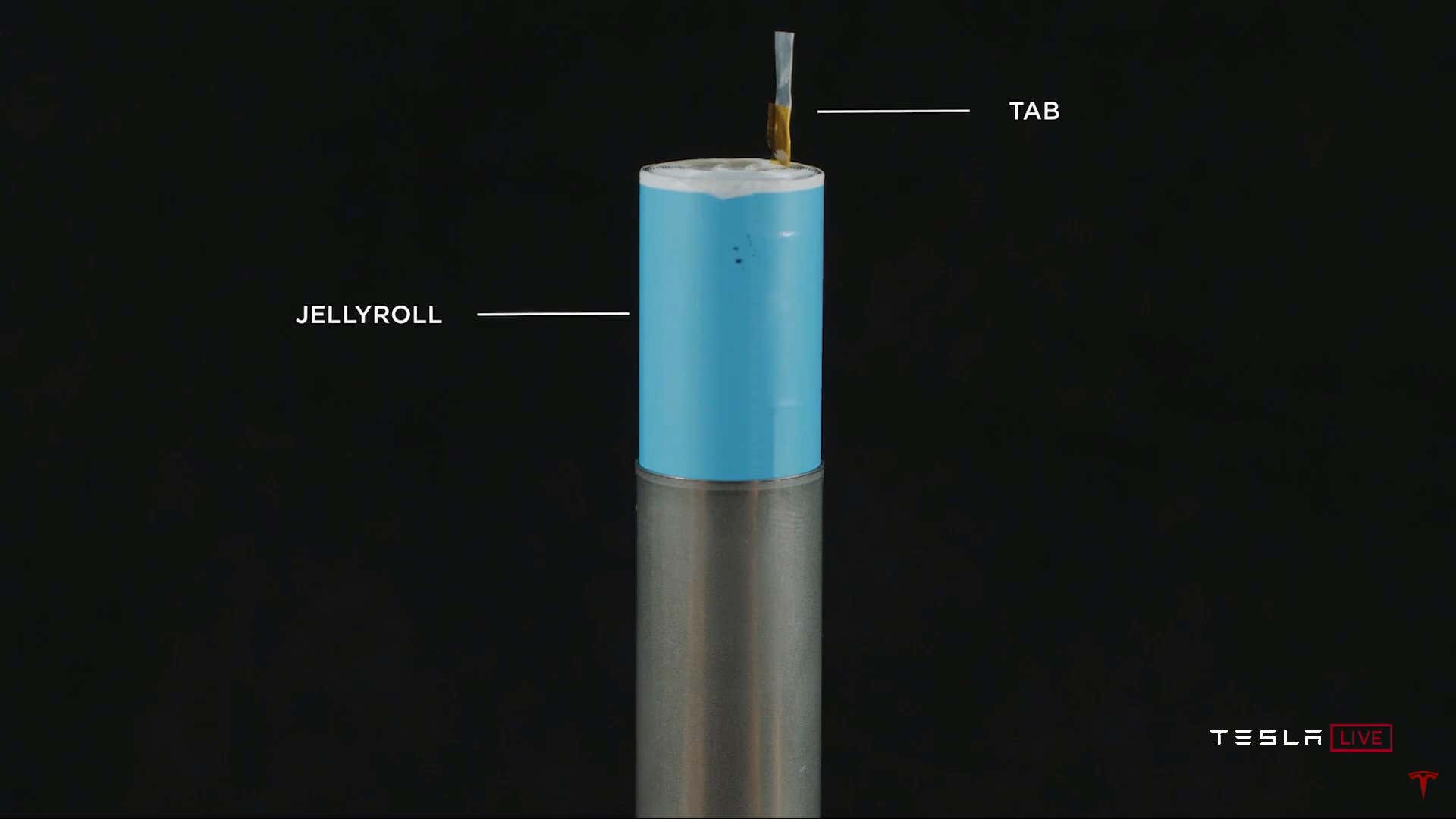 Existing construction of a 2170 Cell

Tesla determined that making their cylindrical cells larger would cost less to produce and increase their density. But of course, there are challenges when making something bigger, including weight and thermal management. But by designing battery using a shingled spiral design, Tesla says its engineers were able to maintain thermal equilibrium despite the larger cylindrical design.

The result is Tesla’s new cell: the 4680. Tesla claims that the cell has five times the energy stored within compared to the 2170 currently found in the Model 3 and Model Y. This means 16 percent more range over current cells and a 14 percent reduction in cost. 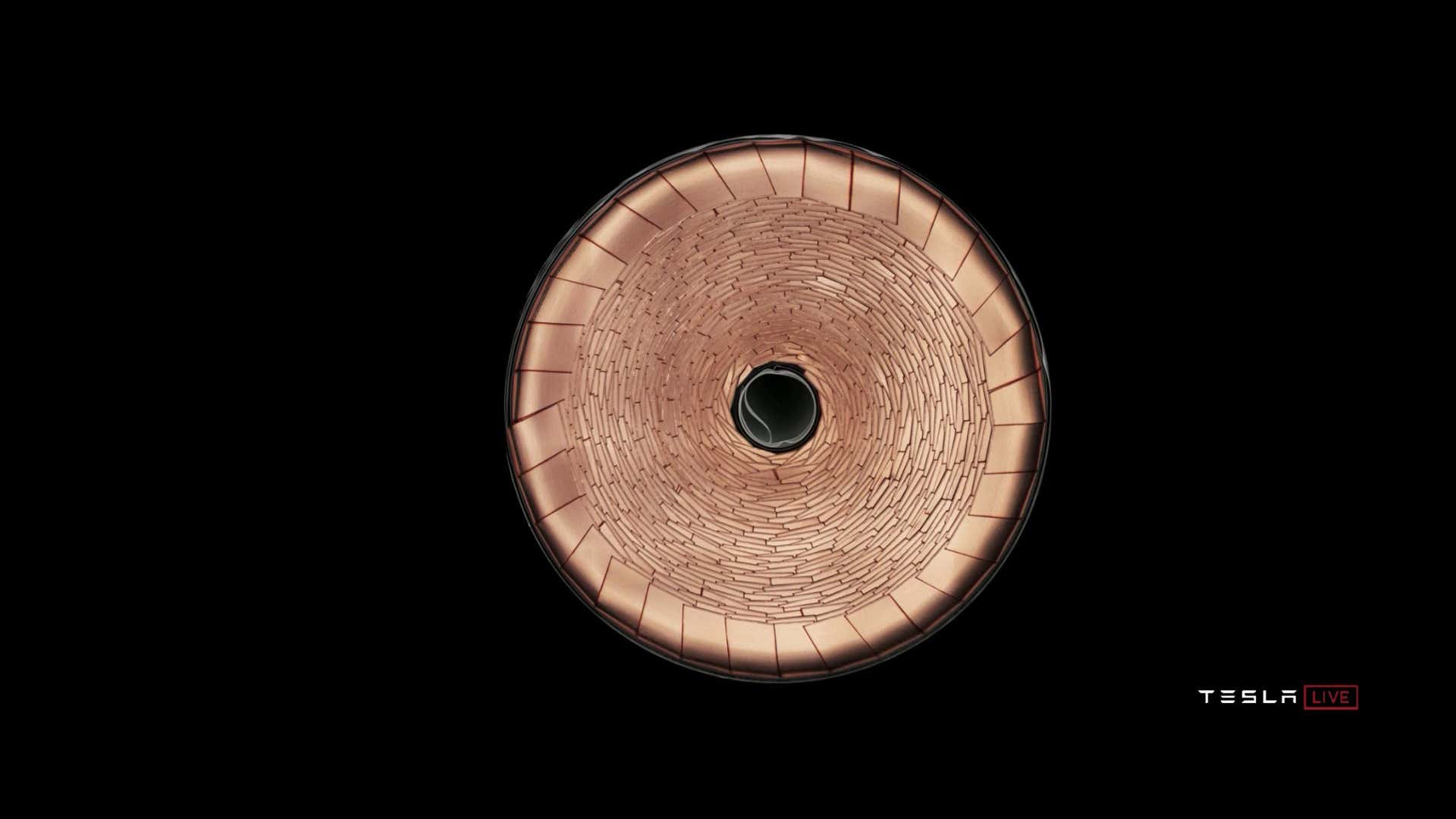 The immediate, obvious benefit to a battery cell redesign is better range. But that isn’t the only thing that makes an electric car travel further on a single charge.

Presently, Tesla already stows the batteries away in the floor of the car, however, Musk compares this akin to luggage. Tesla will use its new casting process to integrate battery rigidity into the car’s structural support, strengthening it even further than a modern floor-mounted battery pack. The cells can be packed even closer to the center of the vehicle, improving vehicle handling, range opportunity, as well as decreasing overall mass and parts complexity.

Cells are sandwiched between castings

With the changes to storage, increase efficiency in cells, and overall packaging of the battery, Tesla believes that the new changes enable up to a 54 percent increase in vehicle range. That would be a massive, massive jump from a company that already has the longest range EVs in the business.

Tesla’s goal has always been an affordable car, though this isn’t something that it truly achieved with the Tesla Model 3 (though it really did help to drive down the cost of EVs as a whole).

A large part of the car’s cost comes from batteries. Fortunately, this cost alone has been rapidly dropping for over a decade. In 2010, the cost of a battery pack was around $1,000 per kilowatt-hour—that’s how much it cost to store enough energy to travel around 3 miles. By the end of 2019, the market average was reportedly around $156 per kWh, except for Tesla. While the actual dollar per kWh is kept as a trade secret by Tesla, Musk previously let slip that Tesla expected to be spending under $100 per kWh by the end of 2018.

Now, Tesla expects to reduce its costs even more. The automaker has committed to using its own processes to extract raw and recycled materials to enable it to scale and reduce cost by a total of 56 percent per kWh.

The current price of battery packs is unknown, though Tesla’s acquisition of Maxwell and its dry electrode manufacturing process may mean substantially cheaper batteries than anyone else on the market… eventually.

Tesla currently has the market cornered, but Tesla may feel the crunch when automakers with far more liquid capital begin to net contracts for battery production and drive up the cost of raw material. Can Tesla sustain its place as the face of electric cars if other manufacturers begin to compete with its cost per kilowatt hour? An unnamed Volkswagen executive claims that the Germans have already broken the $100 per kWh barrier.

This is all gigantic new for Tesla, and clearly a huge nod towards the companies acquired within the last year. But the question still remains if Tesla call perfectly execute the necessary steps needed to bring these products from concept to market. Legacy automakers are rapidly encroaching on Tesla’s marketspace, and by the time Tesla plans to reach volume production, other OEMs will have released several battery-powered competitors in many of Tesla’s global markets.

During Musk’s initial comments, he mentions something has has many times over—the CEO has been testing an alpha build of Tesla’s Full Self-Driving suite on public streets for quite some time. But soon, he won’t be the only one. Within the next month or two, Musk says Tesla will push a beta build to some FSD-equipped cars to begin testing the fully rewritten autopilot system.

Musk also admitted that Tesla doesn’t actually make an affordable car right now, despite the initial promise of the Model 3. But with the new battery cell comes another Tesla: Musk surprised the audience with plans to introduce a $25,000 vehicle within the next three years, one that could also double as the base for his long-promised fleet of self-driving taxis. That would make it the cheapest electric car on the market, but there are no further details on it right now.

Shareholders Pushed Back on Business Practices

Prior to battery day, Tesla held its annual shareholders meeting. Aside from announcing changes to the board, Tesla also announced proposed changes that shareholders could vote on to determine the outcome—but this may not have gone exactly as planned, as public comments repeatedly lambasted the automaker over worker conditions and accusations of not doing enough to prevent child labor.

The board was also against introducing traditional advertising to the brand, which was another proposal introduced during the meeting.

This is a breaking story that will be updated.