It’s no secret that the country music industry loves songs about trucks. But decades before landing a hit single required lyrics about dirt roads and lifted pickups, it was songs about semis that were all the rage, back when truckers were seen as modern cowboys rebelling against law enforcement and enjoying the freedom of the open country. We’re talking, of course, about the 1970s, when a brief but intense fascination with trucking left indelible marks on American pop culture, gracing us with things like CB lingo, “Convoy,” and Smokey and the Bandit. But when you dig into the real story of the Seventies’ trucking craze, you can trace much of it back to a surprising source: a whimsical TV commercial for bread, and the son of a trucker-turned-ad man who developed it.

To be clear, like any major cultural moment, the mania was driven by numerous factors—namely, the then-recent creation of the Interstate Highway System, the rise of CB radios (along with the lax enforcement of FCC rules), and a country that loves little more than the mythos of hard-working, rugged individualism. Long-haul truckers, with their own unique culture and codes of conduct, their own language, and the physical symbolism of a man in control of a mighty beast, were a natural fit for the folk hero role they’d play that decade. 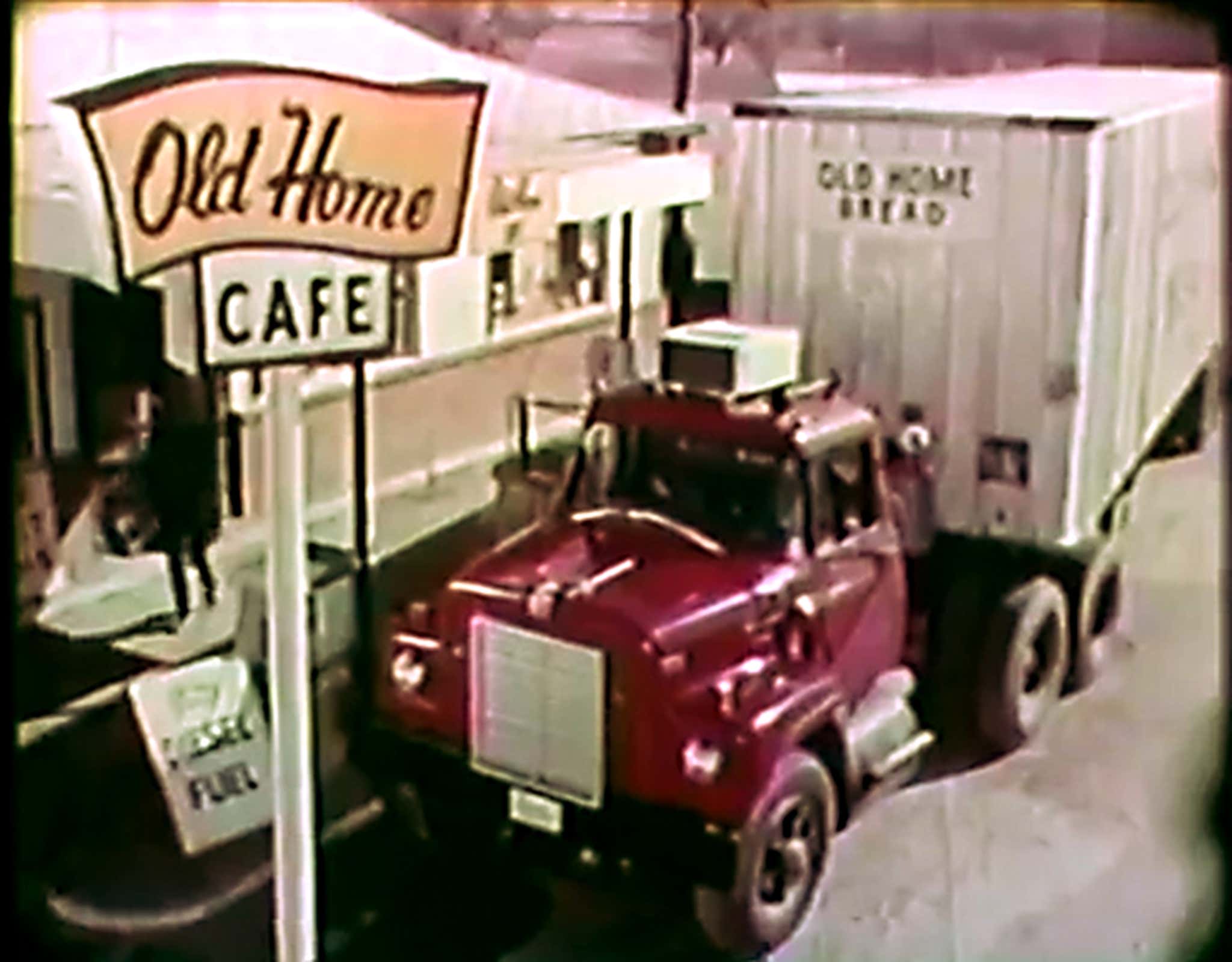 It just so happened that the one person ready to capture that zeitgeist was creative director William “Bill” Fries, of the Omaha-based ad firm Bozell & Jacobs.

In 1973, Fries was tasked with creating a series of regional commercials for the Metz Baking Company’s “Old Home Bread.” Inspired by his childhood in rural Iowa, he wrote a story of a truck driver named C.W. (supposedly short for Country-Western) and a waitress named Mavis Davis. Set to catchy music with Fries himself performing the poetic baritone narration, the first three spots featured C.W. driving an International Harvester Fleetstar semi and braving various challenges like rain, potholes, and a heat wave while delivering a cornucopia of delicious bread products.

Each time he pulls into “Old Home Filler-Up an’ Keep-on-a-Truckin’ Café,” Mavis, the gum-chewing, eyelash-batting waitress, greets him with a warm smile. After a quick bite of whatever he just delivered, C.W. hits the road again.

Starring Jim Finlayson as C.W. and Jean McBride Capps as Mavis, the ads debuted later that year. Audiences fell in love with the pair, the ads won a Clio Award in 1974, and sales of Old Home Bread soared. More commercials followed, and after several were filmed in the town of Pisgah, Iowa, the local cafe owners renamed their restaurant after them. The Des Monies Register even published the air times of the ads so locals could tune in. At least one other bakery got in on the action, as Fries voiced a near carbon-copy of the commercials for Kern’s bread in a different part of the country. 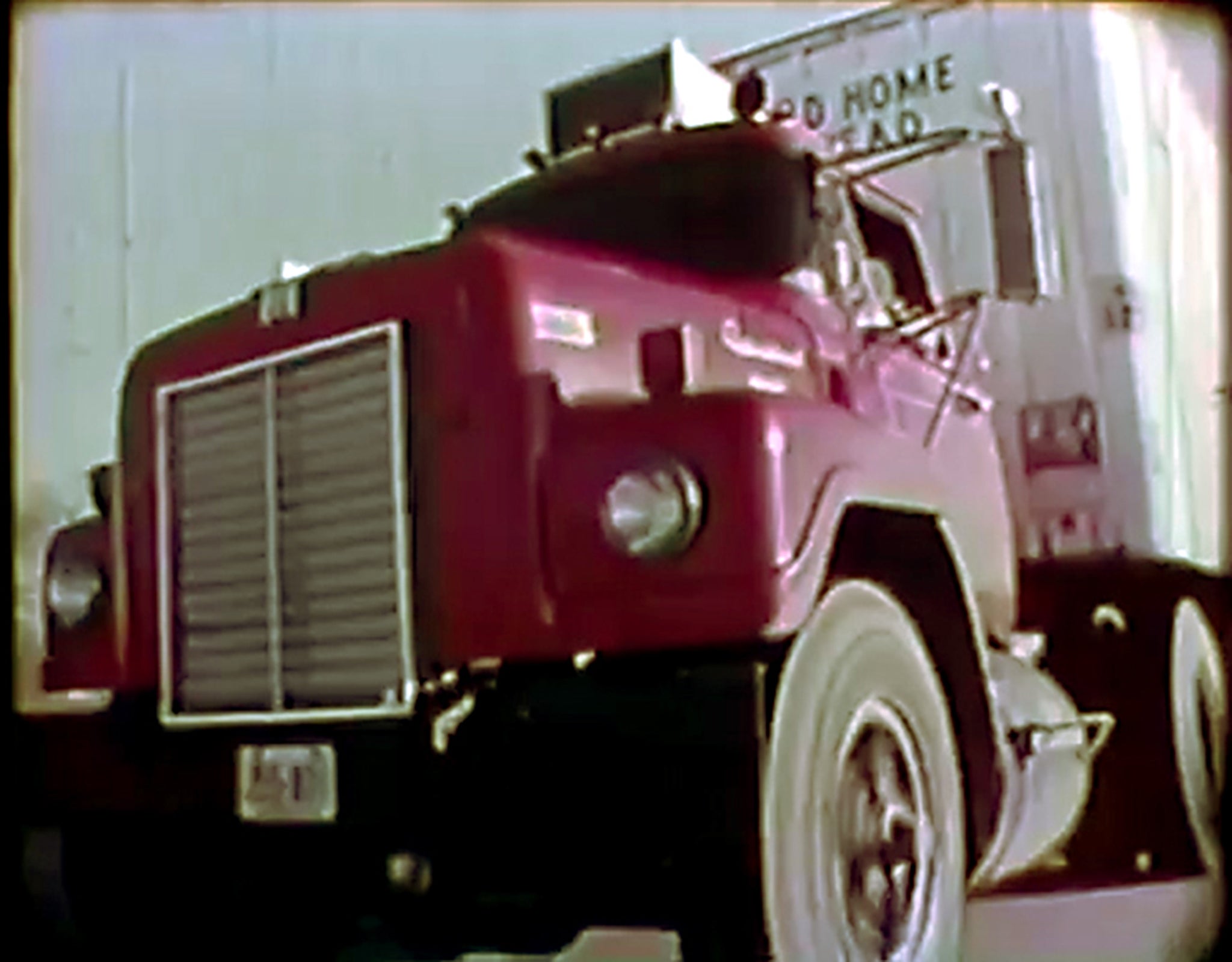 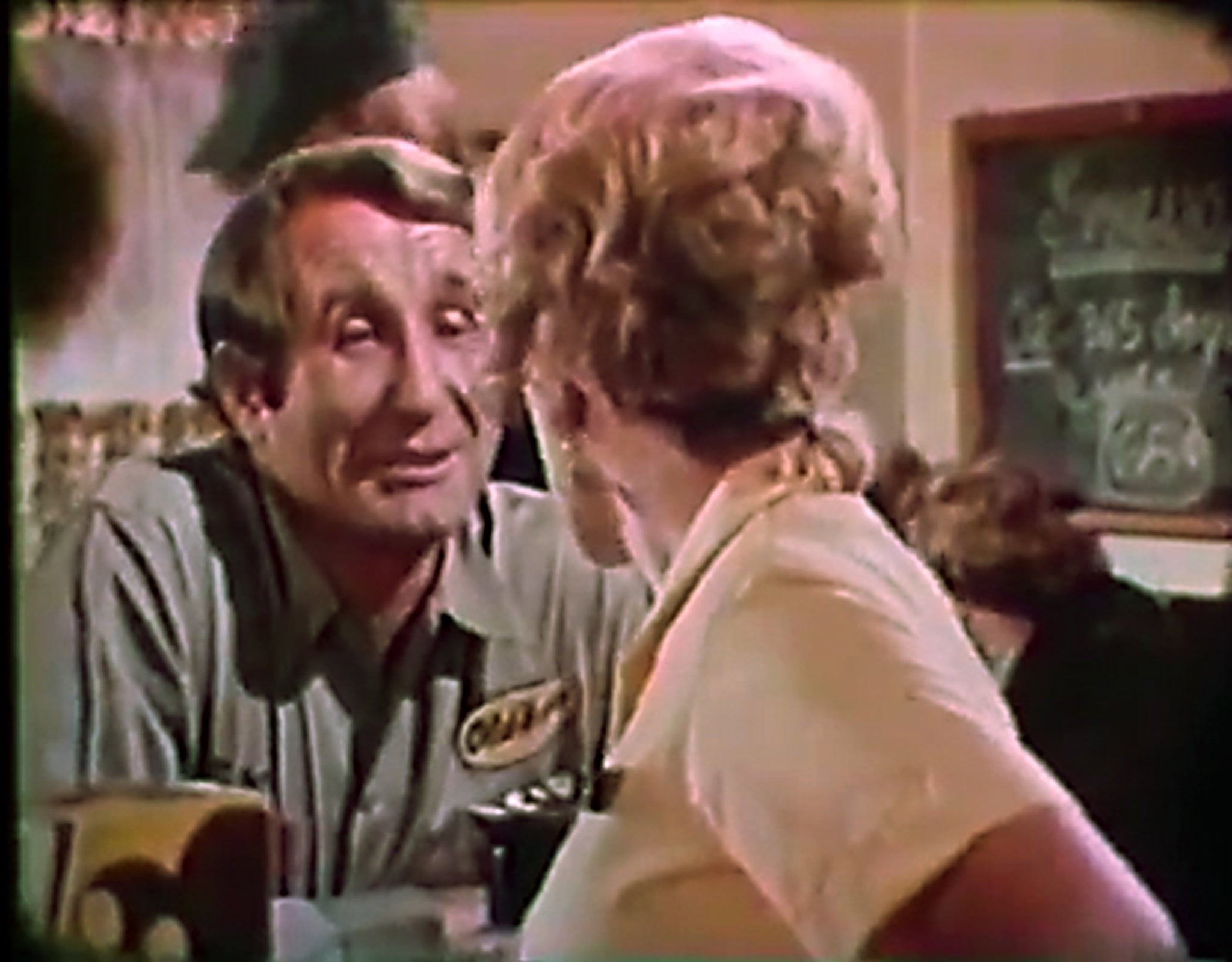 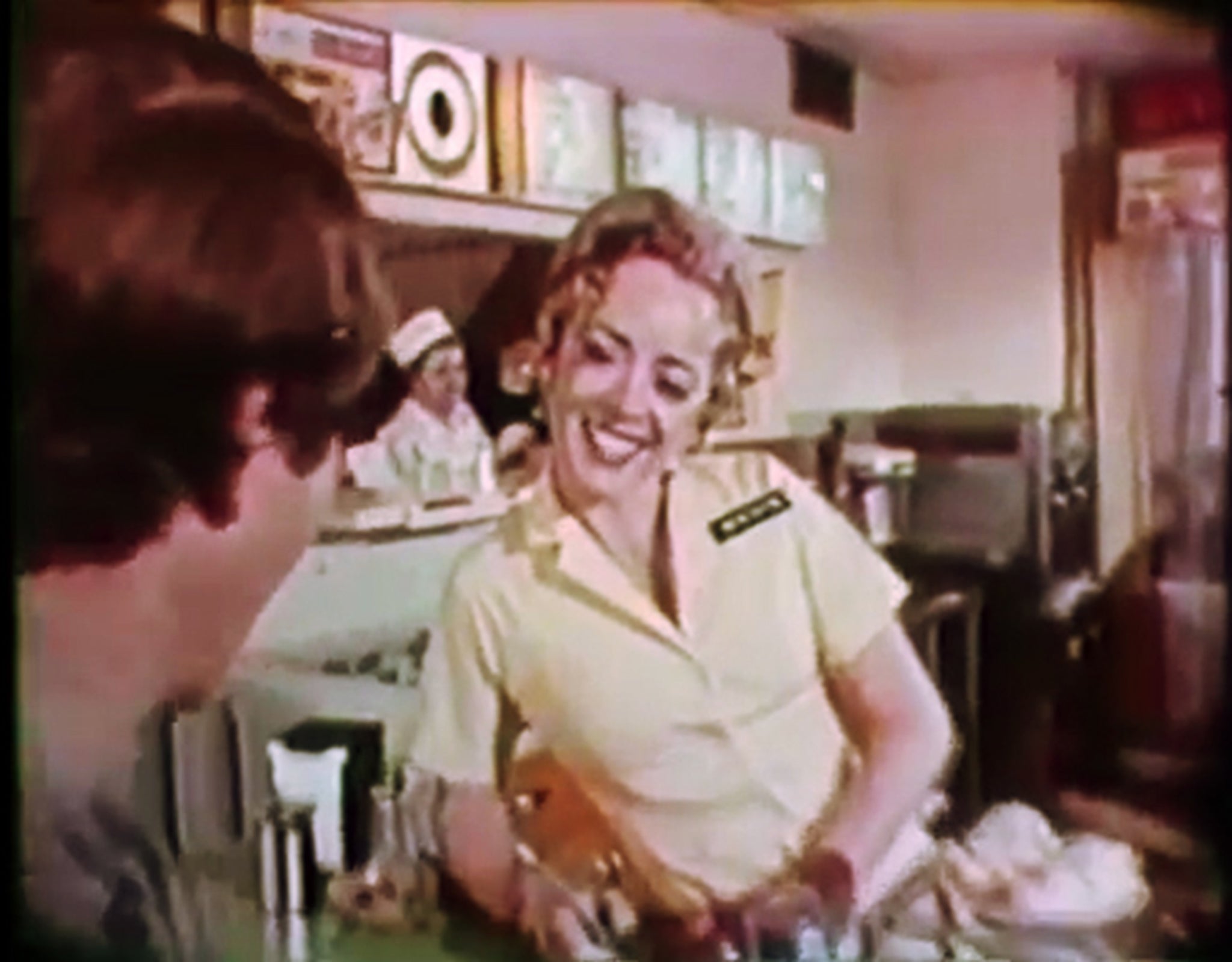 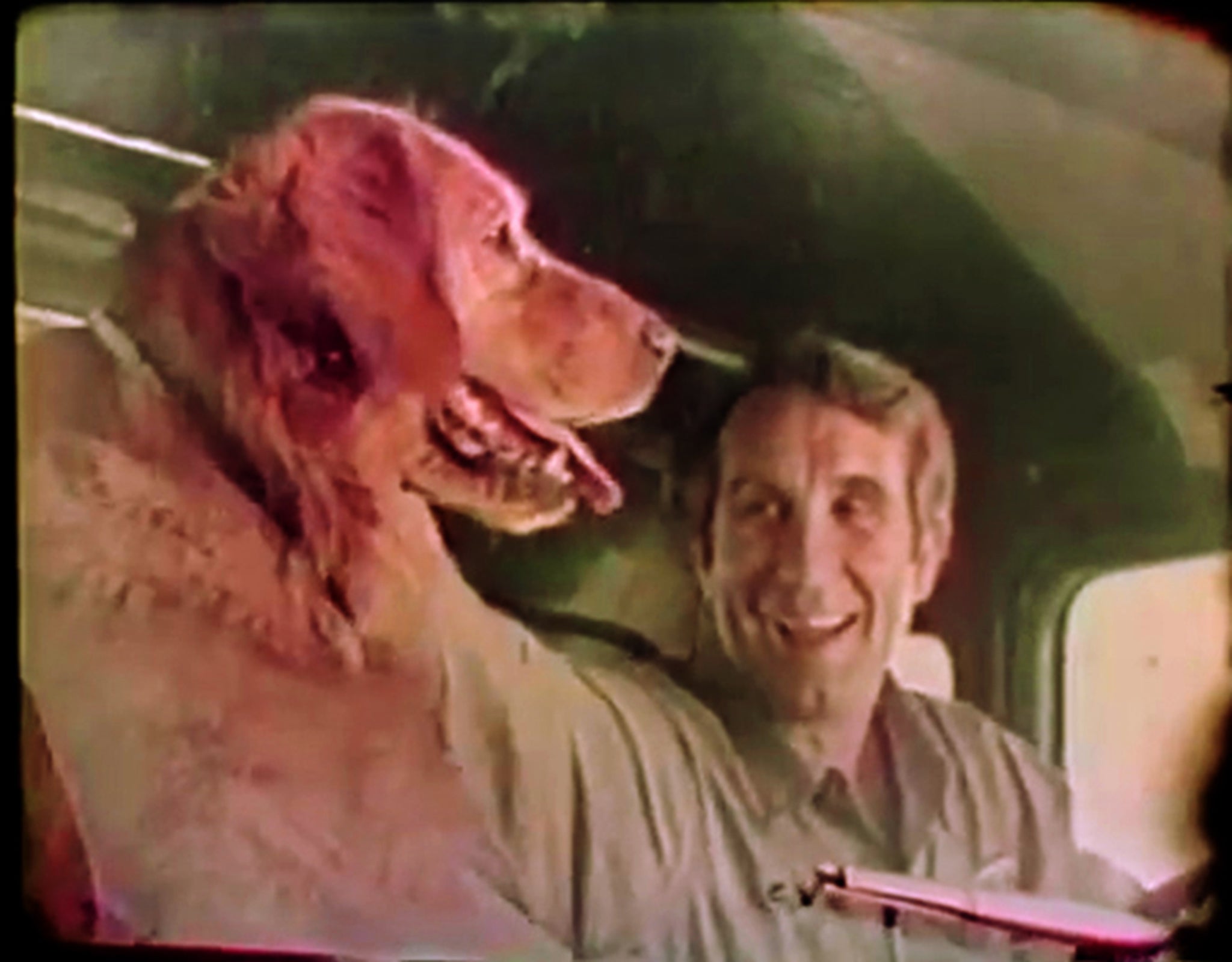 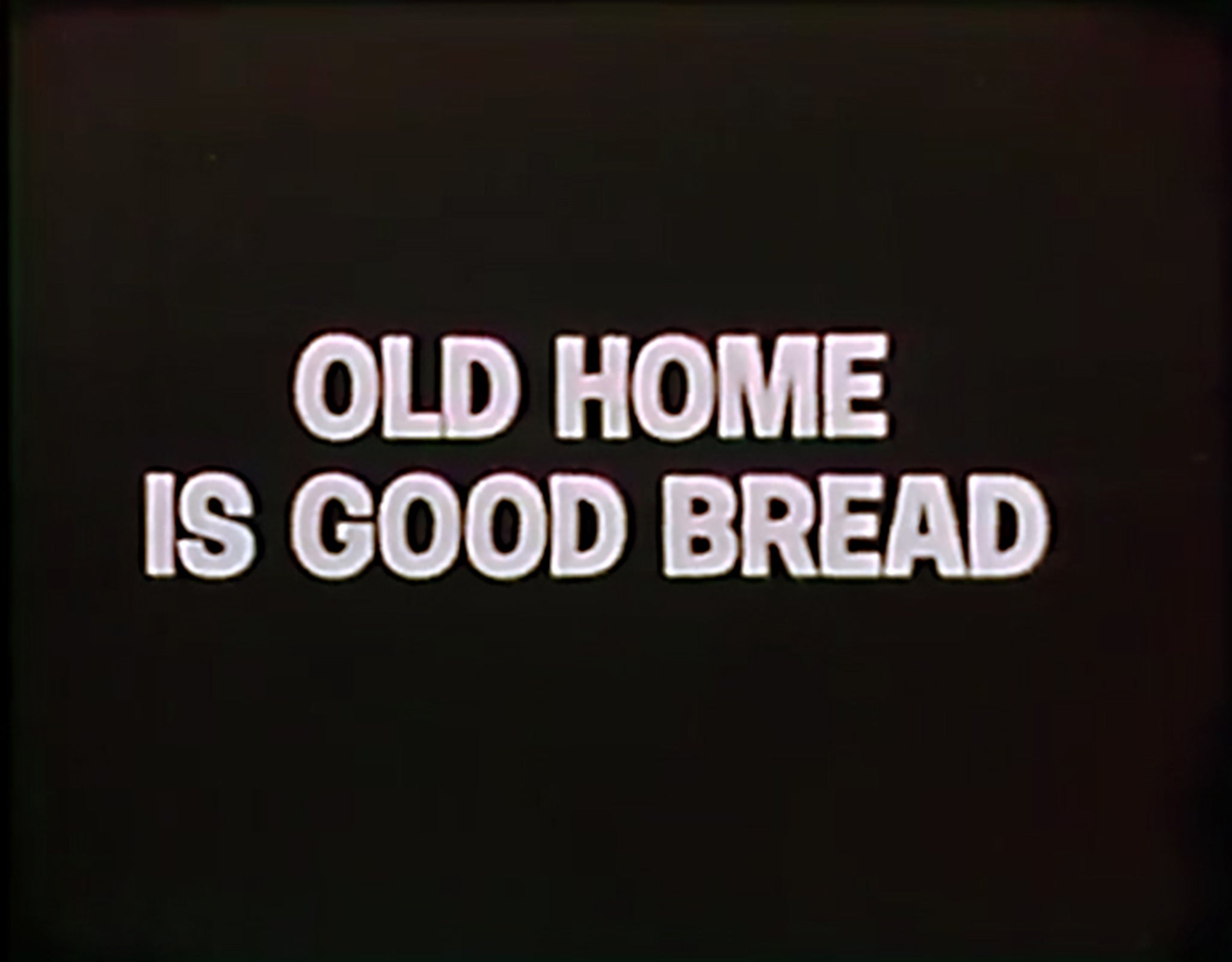 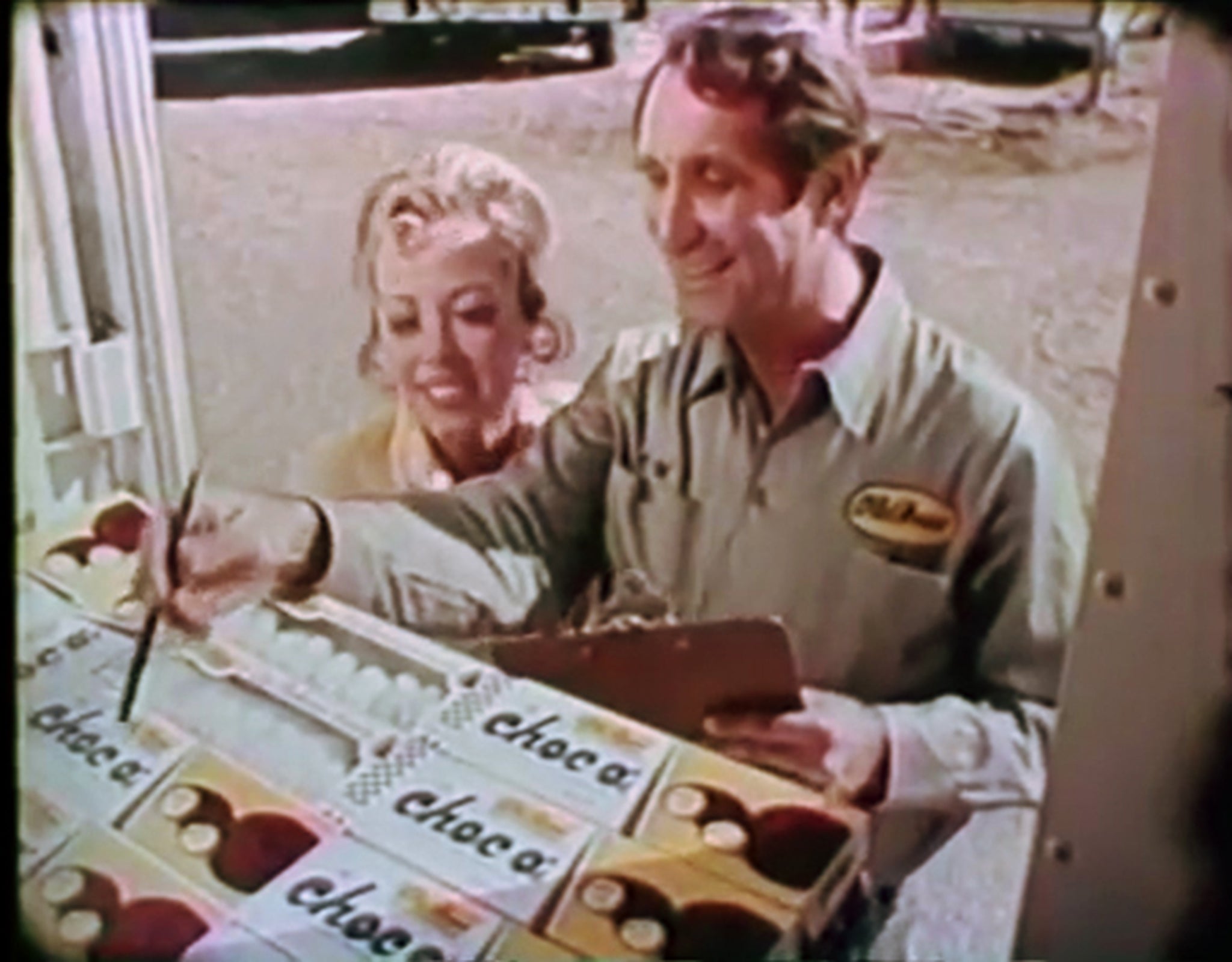 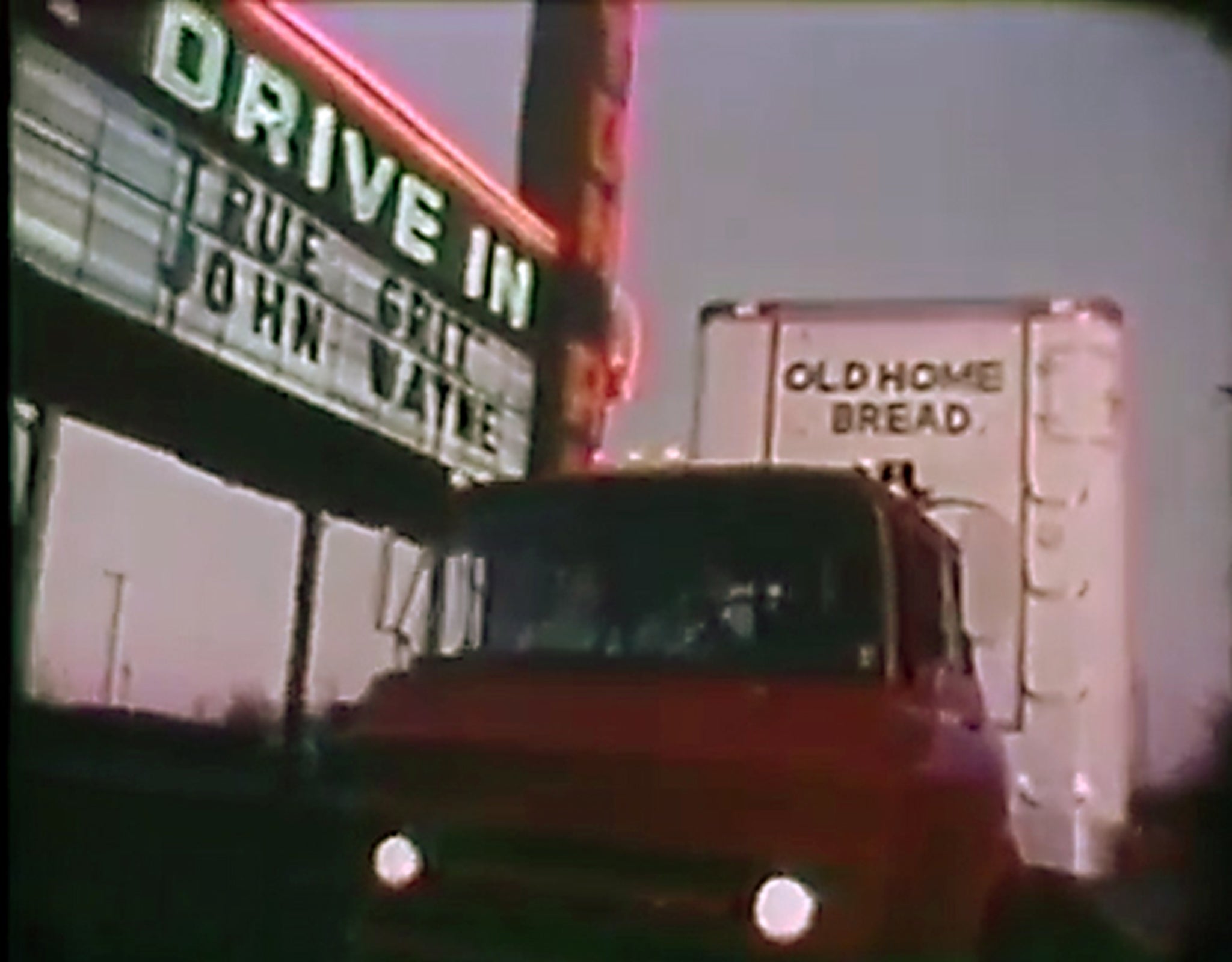 New characters were introduced, like Sloan the dog and Mavis’ mother, played by what appears to be a man in a dress. The semi truck switched from an International Harvester to a GMC and then a White, and the ads increasingly focused on the couple’s adventures rather than baked goods. There was lots of clutchin’, shiftin’, and other truck lingo, and while many a long-suffering waitress have endured the unwanted advances of truck drivers, Mavis appeared to genuinely reciprocate C.W.’s affections. Although, describing a woman as “built like a burlap bag full of bobcats” is both uncomfortable and bizarre.

By the 12th commercial in the series, C.W. proposed with a ring that he said cost, “a whole lot of bread.”

‘Cause We Got a Great Big Convoy

Before he worked in advertising, Bill Fries grew up helping his father deliver prefabricated pig barns. This experience imparted a folksy realism to his trucking stories, and when, combined with his rapid speaking-singing cadence, it struck a chord with middle America. Still, the character of C.W. McCall might’ve stayed a regional favorite had Fries not been encouraged to start recording country music under that stage name.

With help from Chip Davis of the band Mannheim Steamroller, they produced two albums in 1975: Wolf Creek Pass, which featured an adaptation of the C.W. and Mavis story, and the later Black Bear Road, which contained a little song called “Convoy.” You may have heard of it.

Unexpectedly, “Convoy” hit #1 on both the country and pop charts, catapulted Fries to real stardom and further cemented the trucker’s place in pop culture that decade. Featuring fictional truck driver with the CB handle Rubber Duck, it tells the story of a group of truckers forming a convoy where multiple speeding semis join together on the highway so that police can’t stop all of them at once. Americans loved the rebellious tale of racing across the country, breaking the recently-imposed 55 MPH national speed limit, and evading capture from an increasing number of “bears” (police).

Though entirely fictional, the song was inspired by reality. Fries owned multiple CB radios and overheard the Rubber Duck name when listening to chatter between drivers. By the mid-’70s, the trucking industry was being squeezed by rising fuel costs and lower speed limits, both of which hurt productivity and profitability. Convoy was seen as a working class, anti-government protest song, and soon Fries was touring the country as C.W. McCall and performing on network TV. What started out as a few commercials about hamburger buns led to national fame and fortune.

In 1977, a low-budget trucking film called Smokey and the Bandit became the second-highest grossing movie of the year after Star Wars. The CB craze had officially taken America by storm. Every brand from Plymouth to Lincoln began offering CB radios in their cars, and Jeep even had a special “10-4” package for their pickup trucks, 10-4 meaning “affirmative” in CB slang.

In typical Hollywood fashion, studios were now green-lighting all kinds of trucking films, one of which included a movie adaptation of Convoy in 1978. Interestingly enough, neither Bill Fries nor Jim Finlayson starred in the film, as the lead role of the Rubber Duck went to country music singer/songwriter/actor Kris Kristofferson. The film was supposedly meant to be more emotional, but conflicts between the studio and director Sam Peckinpah led to him being fired and the movie being recut as more of a comedy. Despite having a considerably larger budget than Smokey and the Bandit and being filled with bar fights, an exploding tanker truck, and the destruction of many AMC Matador police cars, Convoy‘s confusing tone and increasingly cliché truckers-vs-cops storyline failed to impress critics.

We’ll Catch You on the Flip-Flop

It seemed the CB craze was on its way out as fast as it arrived, and so was C.W. McCall. Bill Fries announced his retirement from the music industry in 1979, although he did record a few more songs over the years, including one about cannibalism. He also continued to voice bread commercials, as a news story from 1982 shows actors Jim and Jean returning to eat Kern’s “bread of the future” at the 1982 World’s Fair (although Jim’s character was now named A.J., and he drove a Mack truck).

Fries left the ad business in the mid 80s and moved to Ouray, Colorado, where he served as mayor for six years. He collaborated with Chip Davis again in 2003 on a Mannhiem Steamroller album featuring patriotic songs plus new recordings of Convoy and Wolf Creek Pass. 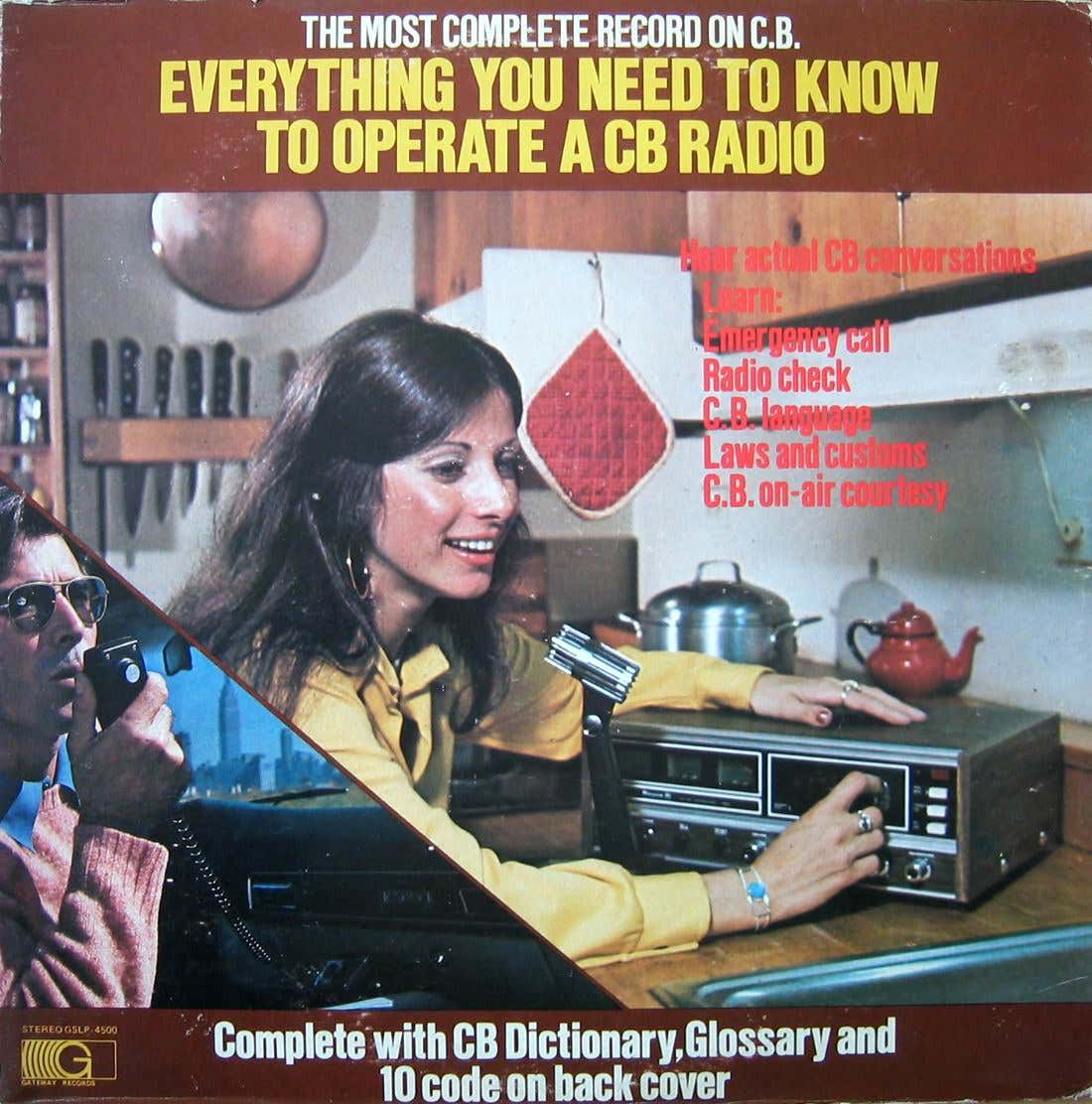 Looking back, America’s obsession with truckers and CBs was an interesting confluence of technology, automobiles, and government regulation that produced some genuinely significant works of art, even if one started out as a bread commercial. It’s a moment in time that will never return—back then, drivers used CBs for communication, traffic, weather, navigation, and entertainment, but now smartphones and increasingly-connected infotainment systems do all that and more. The 55 MPH national speed limit was lifted in 1995, and it seems especially quaint in today’s world where people in brodozers drive 90 while simultaneously passing on the right and scrolling through Twitter.

Likewise, quirky family-run cafes have been replaced by national truck stop franchises, and even regional bakery companies like Metz have been bought, sold, and merged into huge food conglomerates. New technology and fear of lawsuits have led the trucking industry to keep a closer eye on driver behavior, ending the sort of wild west ethos of the 1970s. In some states, forming a convoy of trucks is even illegal.

But just like the American cowboy, the legend of the American trucker persists: a hard-working, gear-jamming, bear-dodging rebel for whom the only real truck has 18 wheels. And for all those wanting to relive the golden days, you don’t need a CB, or even radio at all. You can just look up C.W. McCall on Spotify. 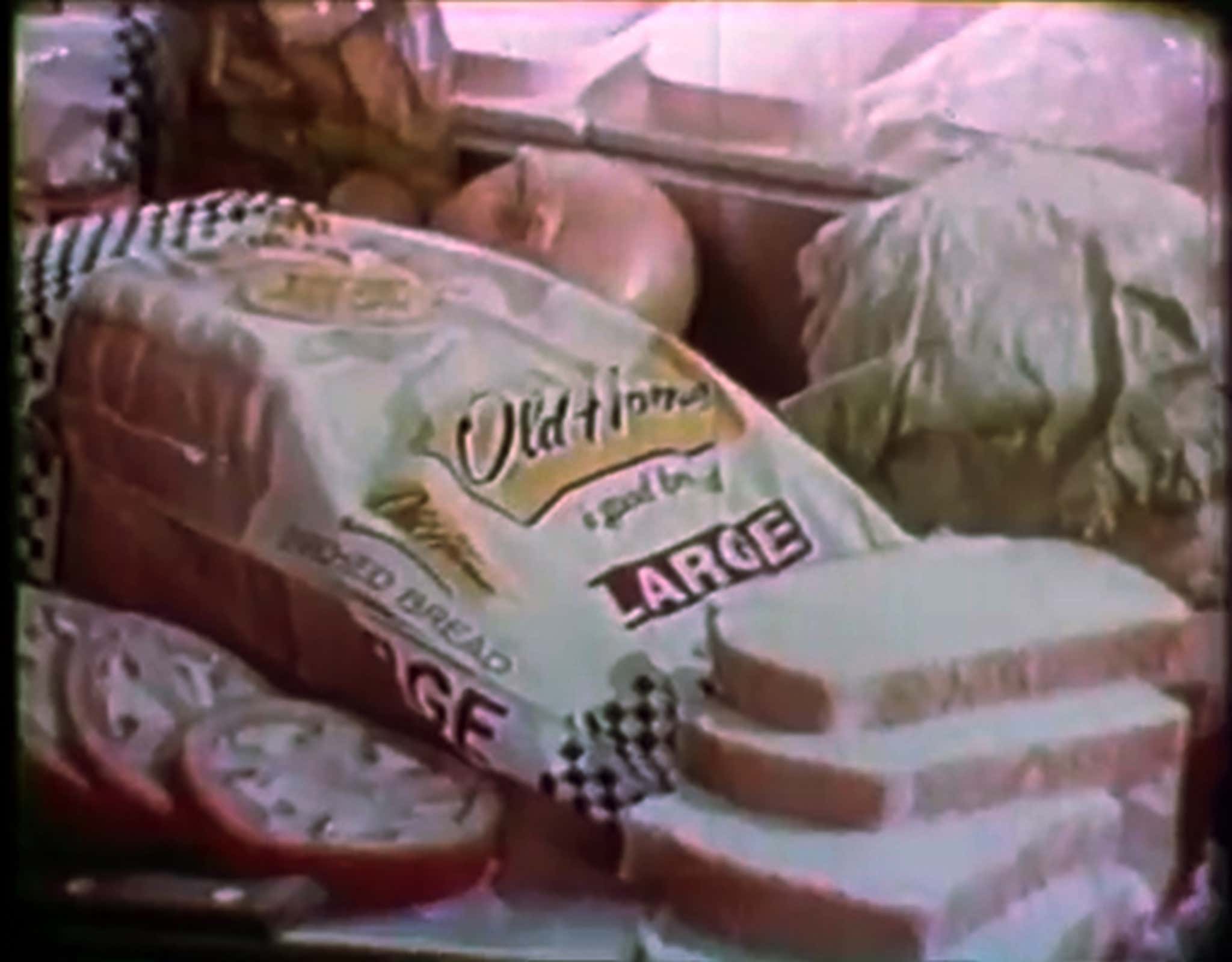 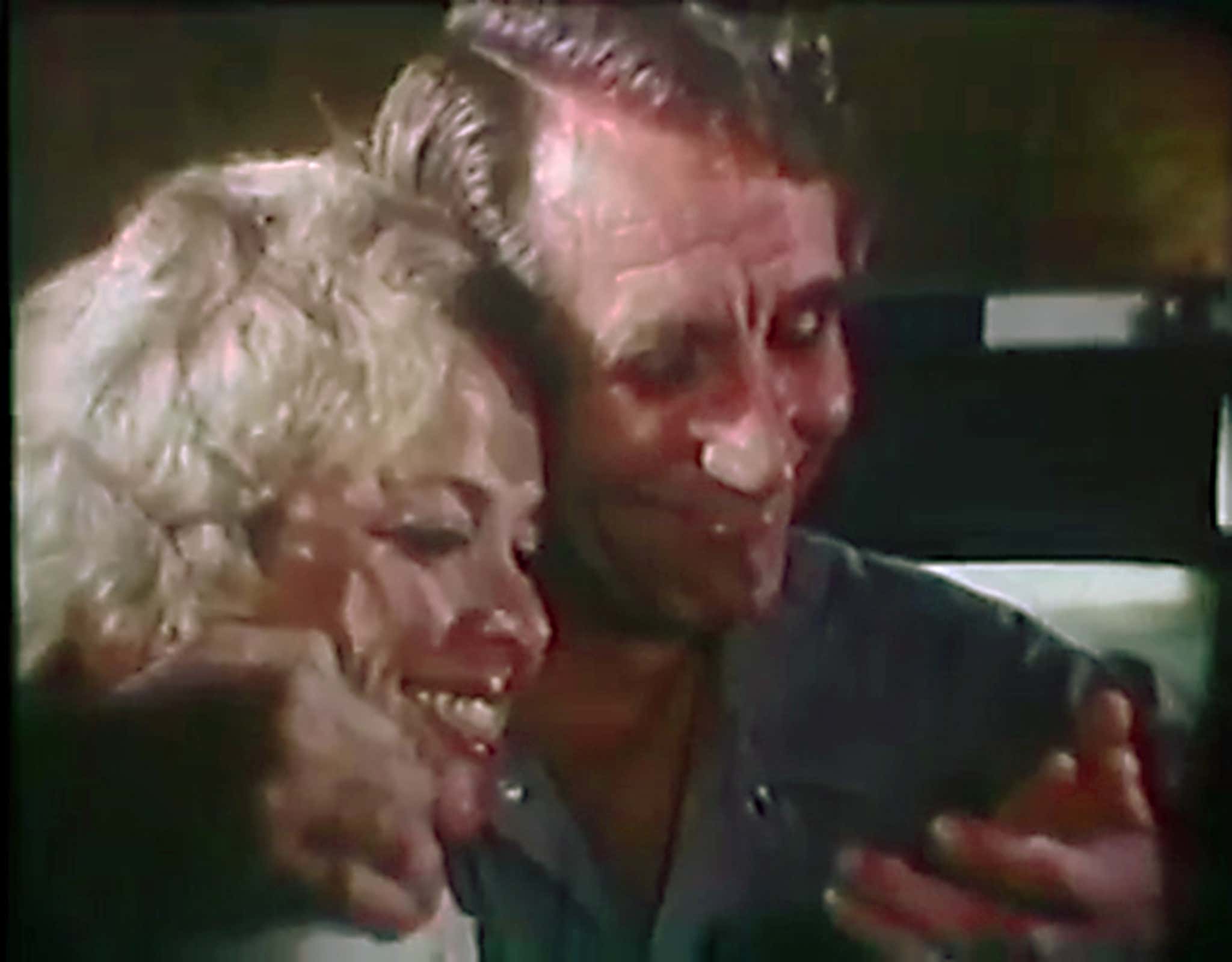