The upcoming 2022 Ford F-150 Lightning electric pickup will be a game changer, for sure. Promising the capability people have come to expect from the best-selling F-150 while also introducing battery-electric performance (and its pros and cons) to a traditional fanbase will be no small feat. However, Ford has a trick up its sleeve that may finally persuade truck owners to go electric: The F-150 Lighting will be able to charge other F-150 Lightnings.

In conversation with the truck’s chief engineer Linda Zhang at the 2021 Los Angeles Auto Show, we learned about the lengthy process Ford went through to squeeze the most performance and practicality out of its upcoming pickup. One of those key traits revolves around the truck’s ability to act as a rolling battery and power generator, which allows it to share its electric charge with other devices—which up until recently we knew could be anything from camping gear to an entire house. Now, it turns out the Lightning will have vehicle-to-vehicle charging capabilities via its main charging port.

“We are [working on] a vehicle-to-vehicle system,” Zhang told The Drive. “[Charging other EVs] is going to be dependent on the power cord, and the Mach-E system is not set up for that right now, but Lightning will be.”

Zhang went on to say that theoretically, an F-150 Lightning could charge any electric vehicle, but the charging cord and electrical architecture compatibilities are the limiting factors. So at first, the truck will only be able to share its charge with other F-150 Lightnings. 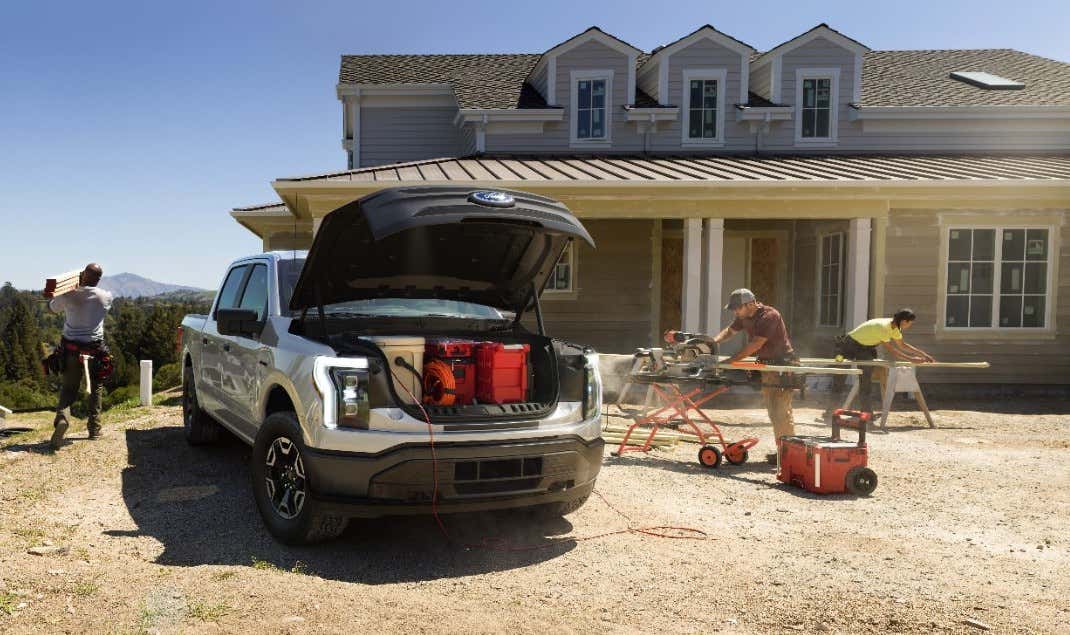 Zhang explained that the idea really spawned from the success of the current hybrid F-150 PowerBoost, which can use its onboard generator to power a variety of external devices, including an entire home if the home is equipped with an inverter (as we’ve explained before).

“We have a battery system that you can pull electricity from, in this case, 9.6 kilowatts of power via 22 different outlets around the truck; 220v, 110v, USB, and 12v. As we thought about this Pro Power Onboard technology and we heard from people who were using it [in the hybrid F-150] to back up their refrigerators and homes during power outages, we developed the theme more [in the Lightning],” Zhang added. “We ended up with something called Intelligent Backup Power. It uses the Lightning’s actual charging port on the side of the truck, where you plug it in to charge, to do bidirectional power transfer with the extended range batteries, turning the truck into a mobile backup generator on wheels for an entire home ecosystem paired with a home inverter.”

Going one step further and having the ability to share a charge with another compatible EV is really quite the breakthrough, even if for now it’s limited to the same make and model. Some smartphones are already able to share a battery charge with other compatible smartphones, and Rivian CEO RJ Scaringe told this very outlet back in 2019 that his company was planning V2V charging for the R1T, though that tech didn’t make it into the production model launched this fall.

Being able to help a fellow Ford owner because they don’t have enough charge to make it to their destination is important (and will surely help with range anxiety), but I believe the real advantage to this technology will play out in fleet and/or commercial applications. Being able to top off trucks in the field and essentially shuffle power around to vehicles that need it can be extremely attractive to companies that manage hundreds or thousands of vehicles in construction, mining, utility, and other industries that rely heavily on trucks.

Zhang did not elaborate on when this capability would extend to other Ford vehicles, but given that the necessary changes involve hardware and software, it will likely be a bit. For now, however, potential Lightning owners can rest easy knowing that if they’re ever in a tough spot, all it takes is another friendly Lightning driver to get them out.