In the early 1950s, Giuseppe “Nuccio” Bertone’s design house paired up with a then-unknown Franco Scaglione for Alfa Romeo. Together, they penned a series of cars they called “Berlinetta Aerodinamica Tecnica,” or BATs for short. Each was built on an Alfa Romeo 1900 chassis and featured fanciful, futuristic aviation-inspired bodies.

Of the trio they handmade in a few short years–BAT 5, BAT 7, and BAT 9–the BAT 7 has the most intriguing history of ownership. Sit right there and I’ll tell you a tale about innovative art, cross-continental multi-million-dollar exchanges, and heartbreak. 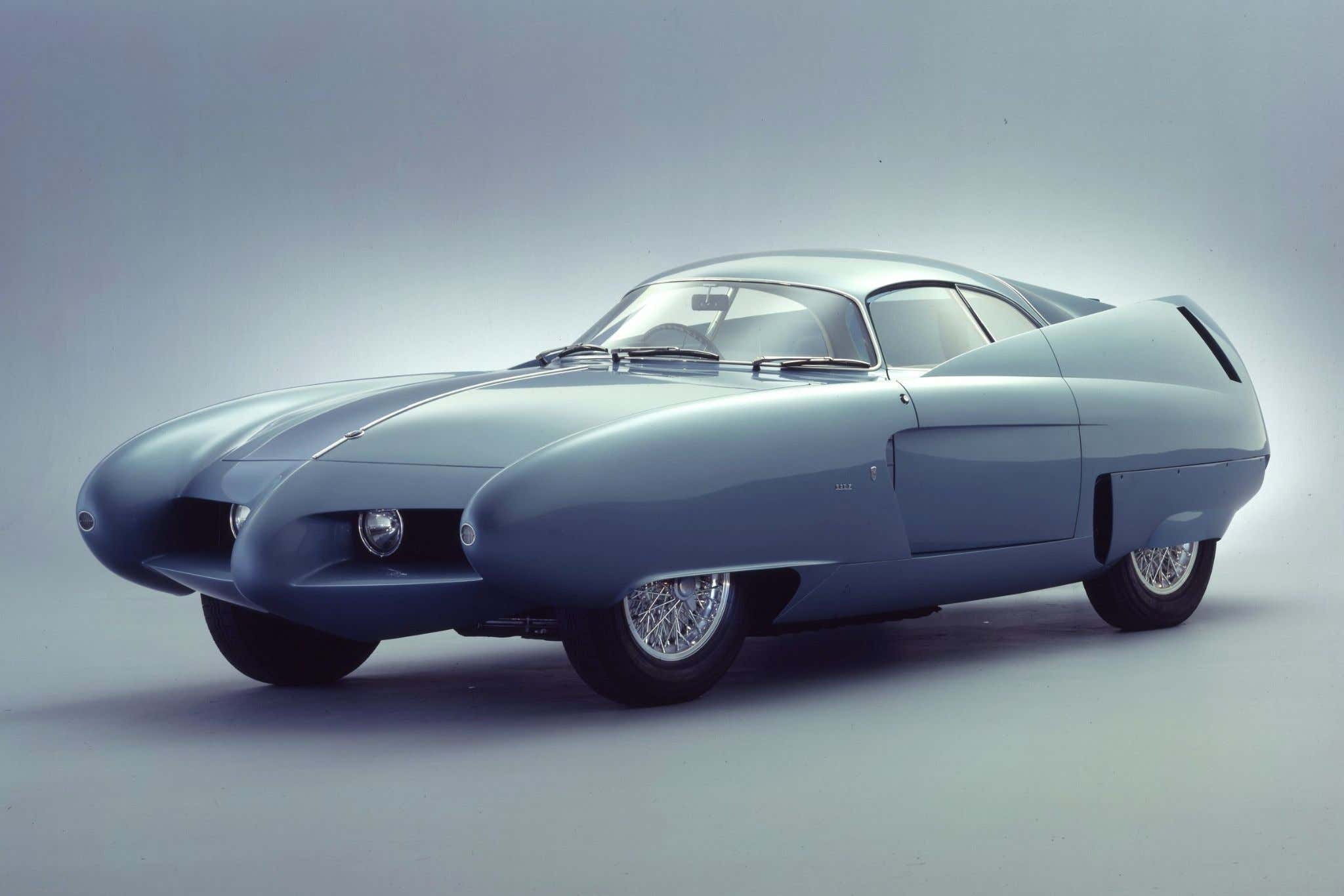 Bertone and Scaglione created Alfa Romeo BAT 5 first, so named because Scaglione created four full-size models before switching to metalwork for the fifth. Incredibly, the car was pushed from concept to creation in less than a year. In May of 1953, it premiered at the Turin Auto Salon and caused a major ripple through the industry; that spurred them to follow up with the BAT 7 in 1954 and finally, the BAT 9 in 1955.

On a recent plane ride, I enjoyed Ford Vs. Ferrari for a third time. This time, I paid special attention to the scene during which Ken Miles drives the car with pieces of wool taped all over it to determine where it wasn’t achieving optimal aerodynamics. Working side by side with Alfa Romeo project manufacturing chief Ezio Cingolani, Scaglione photographed his design at speed with a similar set of wool markers. Clearly, they didn’t align with Enzo Ferrari’s philosophy that “aerodynamics are for people who can’t build engines.”

Designed with ambitious wings and a long, Roman nose, the BAT 7 improved upon the BAT 5, achieving an incredible drag coefficient of 0.19. (For comparison purposes, a new Porsche Taycan has the best drag coefficient of all current Porsche models at 0.22.) Bertone and Scaglione worked so hard on this car they ran out of time to ship it to Turin for its reveal in April of 1954, and they had to drive it themselves on the wings of efficient aerodynamics to the show at the last minute. 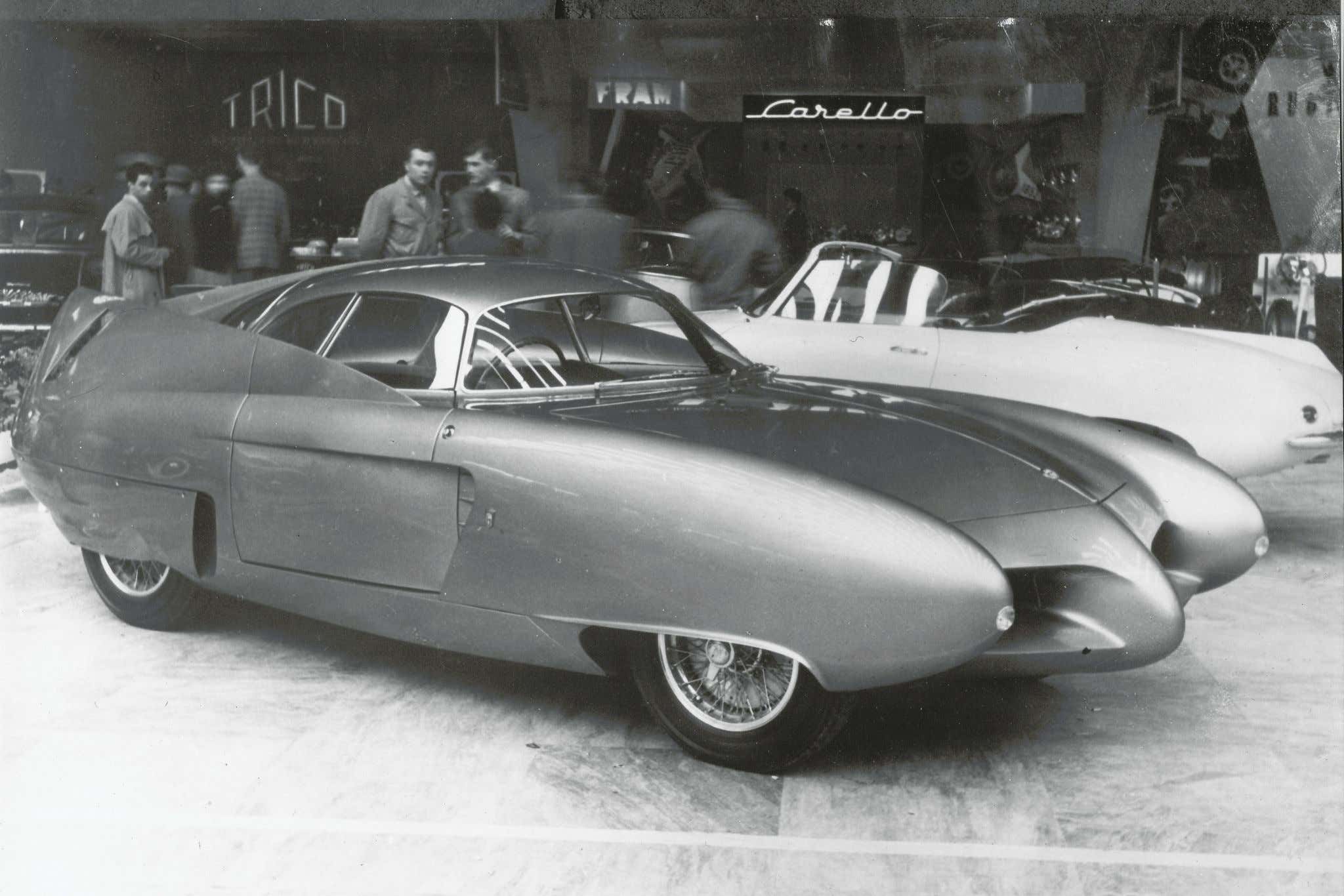 After its debut, the BAT 7 changed hands a few times, and last year the trio of BAT cars were sold as one lot for nearly $15 million by Sotheby’s auction house. Along the way, Al Williams was one of the first owners of the BAT 7 and had the side fins removed (ack!) because they restricted visibility on the road. According to the site Secret Classics, Colonel James Sorrell owned the car in the early 60s and brought the BAT 7 to the Van Nuys-based shop of Salvatore di Natale, renowned for high-quality work on Italian cars, to restore it.

Once di Natale finished the work, Col. Sorrell didn’t pay for what he had commissioned and he never came back to collect his car. In 1969, di Natale took ownership and kept it for 17 years. According to a commenter on a YouTube video of a younger Jeremy Clarkson driving the BAT cars, the BAT 7 was sold right out from under di Natale by an unexpected party: his own son.

“Sal’s sense of humor was witty and he was the nicest guy you’ll ever meet,” Fischer says. “I became close friends with Sal and he helped me upgrade and mod my cars; he was like a grandfather to a few of us younger guys who hung around the shop and he was quick to mentor our projects.

“One Saturday afternoon, Sal invited a few of us guys to his home for a rare dinner treat. Talking shop, we sat around the table enjoying some wine and cheese and all of a sudden Sal began to open up and tell us (with tears in his eyes) all about this car he once owned called the BAT 7. He told us what a special car it was and how he had planned on restoring it and that it may be the only one of that year’s kind. He also mentioned how the wings were stripped off the car and how he planned to restore the wings.”

Here’s where the story takes a dark turn. Apparently, di Natale’s son sold it out from under him. Di Natale allegedly told Fischer that his son had no right to sell the car and forged his dad’s name. 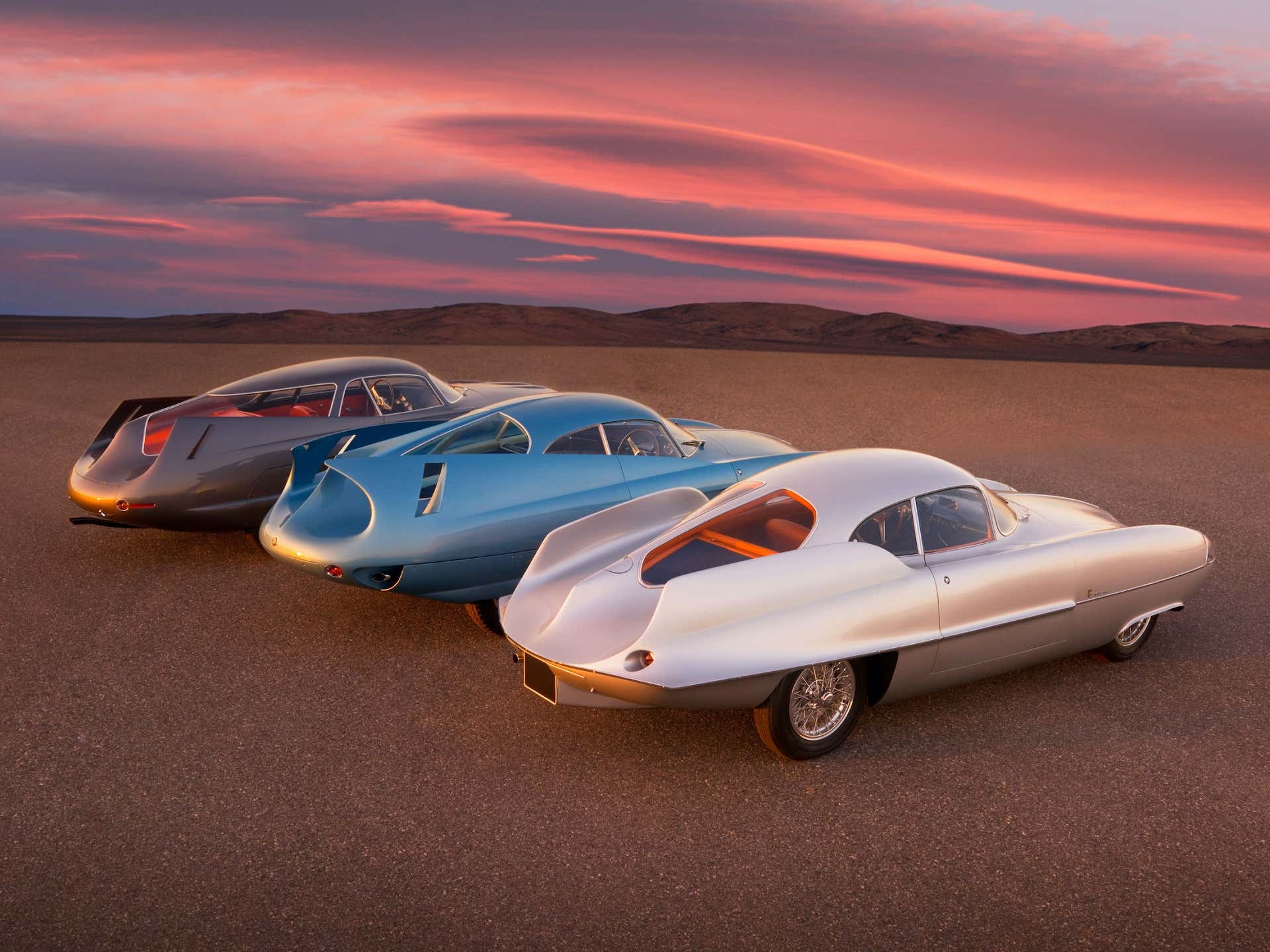 “I believe his son sold the car for as little as $14,000 to $17,000 to a collector who then turned and sold it to a Japanese collector for around $1.3 million. My friend Salvatore was so devastated about the loss and betrayal by his son that he never talked to him again. As a matter of fact, I never heard him before or after that time ever utter a word about the BAT 7 that he once owned and I knew not to bring it up.”

A moment of silence, please, for his loss. Impractical and with massive blind spots, this might not have been the safest car to drive. But the artistry of the fins and sloping body lines, not to mention the incredible aerodynamics, makes this a style I wish would come back.