Ford’s 7.3-liter Godzilla V8 is capable of big power—we know that. Ex-Ford Racing boss Brian Wolfe has been building one for his Mustang Fox-Body drag car and it already impressed with 600 horsepower early in the year. Fast forward a few months and it’s still being built, making monstrous output without the aid of a blower, at least for the moment. In Wolfe’s most recent test, he was able to push the naturally aspirated pushrod engine over 780 horsepower. Not too bad.

While there’s no turbo or supercharger, this Blue Oval power plant is far from stock. Truthfully, it’s set up to run a 3.0-liter Whipple, but Wolfe wanted to warm the engine up beforehand so he could deconstruct it and analyze how it performed. As such, it’s got a billet intake as well as a 90-millimeter throttle body mounted on top. There’s also a good deal of head work; think CNC ported with titanium valves. Still, they’re the stock Ford castings, so that’s got to be good for something.

Wolfe also notes that it’s running the stock block, stock timing chain and stock oil pump. All of these factory parts have supposedly been strong enough to withstand the mountainous pulls they’ve performed on the dyno with some tests even reaching 7,600 rpm. That might not sound like a lot for smaller, lighter engines but in a 7.3-liter V8, that’s impressive. 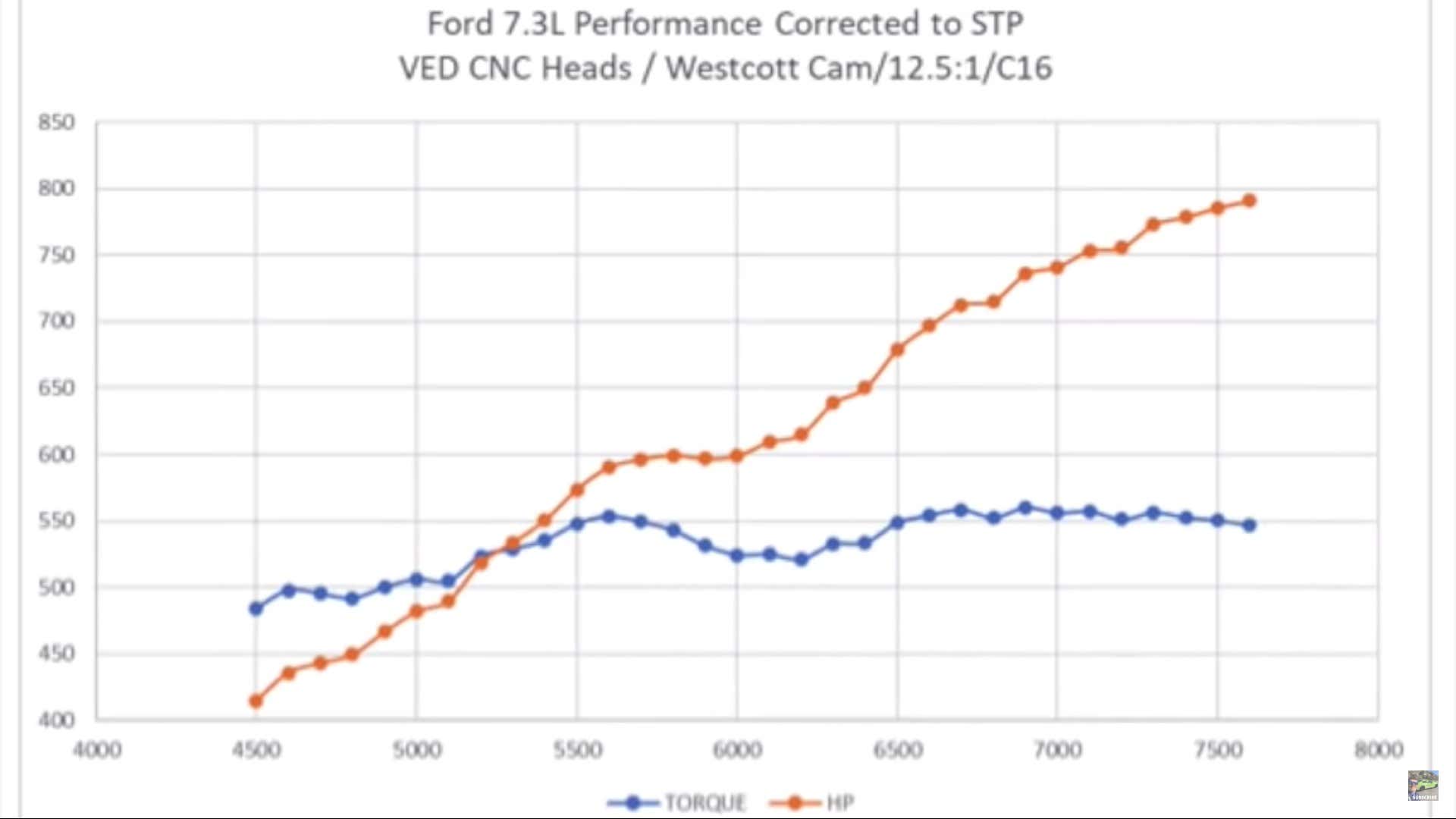 Pump gas isn’t enough to make this sort of power with the current setup so it’s currently running on VP Racing Fuel’s C16 blend. For reference, you can buy a five-gallon pale of it online for just over $100. Combined with an upgraded Westcott mechanical roller cam, Wiseco pistons and MGP aluminum connecting rods, it’s enough to knock on the door of 800 hp. According to Wolfe, there’s “no doubt” it could make over 900 hp in top naturally aspirated form.

If you were to do that, though, he suggests building it accordingly. Equipment like a looser piston ring package, a different cam and a proper throttle body with higher compression would be the key for a more reliable unit.

You can watch the dyno clip here on REVan Evan‘s YouTube channel here:

Toward the video’s end, Wolfe shows the engine fitted with that aforementioned 3.0-liter Whipple supercharger. He says to run in the Altered Street and Extreme Street classes, you’ve got to make at least 1,550 hp and ideally more to be competitive. Given his experience with the Godzilla V8 so far, he seemingly doesn’t expect that to be a problem—and neither do we.