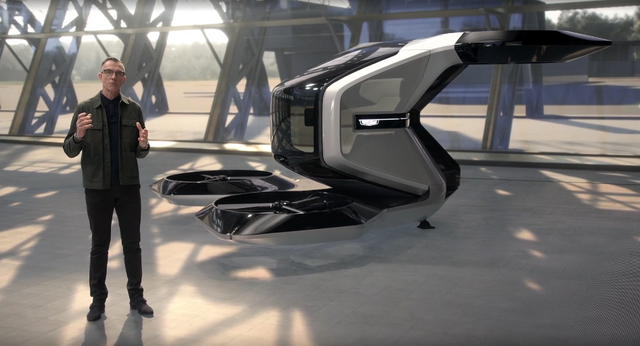 We are all suckers for flying cars. Just like jet packs, moving sidewalks, and robot servants that laugh at our jokes, flying cars offer limitless possibility, a huge leap over the mundanity of everyday life, and a science fiction-like view that the future has finally arrived. And at CES flying cars are now almost a requirement.

Flying car in this case means eVTOL, or electric Vertical Take-Off and Landing craft, basically a more efficient helicopter. Last year at CES Toyota announced a nearly-$400 million investment in eVTOL maker Joby Aviation, a company that appears to be not only still in business but on its way to making something that flies by 2023, according to the Joby website. The year before that it was Hyundai that had a magnificent multi-rotor eVTOL thing on its show stand, along with plans for how it would use them to ferry customers across the San Francisco Bay. Hyundai says it’ll have an air cargo version of that by 2026, an intracity Urban Air Mobility unit by 2028 and regional air mobility operating between cities by the 2030s. Go Hyundai! And before that, Bell Helicopters had a very similar-looking VTOL multi-rotor craft called the Nexus.

This year, just before CES, FCA announced a partnership with Archer Aviation to make VTOLs. That unit will have six propellers, three on each fixed wing, that will tilt up to take off and swing forward for level flight. It looks cool. Production is intended for 2023.

This morning at CES, GM stepped up to the launch pad with, if not a physical model, at least an impressive CAD demo of its own. Since CES is all online this year, maybe a flying car video was more appropriate.

The Vertical Takeoff and Landing Drone, or Vertile as near as we can guess the spelling since it was spoken and not written out, is GM’s first modern foray into aeromobility. 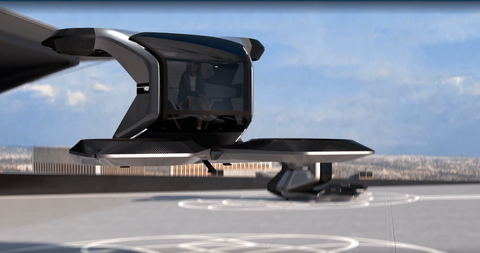 “We are preparing for a world where advances in electric and autonomous technology make personal air travel possible,” said GM VP of Global Design, Michael Simcoe. “It is a concept designed for the moment when time is of (the) essence, and convenience is everything. You’ve been at the office and now you need to get to a meeting across town. The Vertile meets you on the roof and drops you at the Vertiport closest to your destination. It uses a 90- kwh (battery powering an) EV motor to power four rotors as well as air-to-air and air-to-ground communications. As a passenger it represents personal space and a panoramic view of the world passing beneath you. It is a glimpse of what autonomy and Cadillac luxury might look like in the not-too-distant future.” 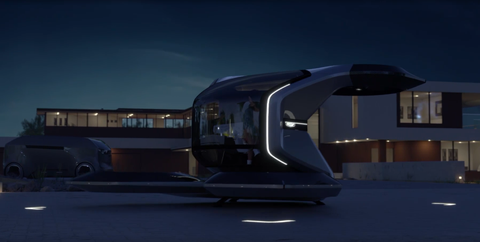 There wasn’t much more said about the GM craft, which leaves the possibilities wide open. Or suggests it might just be a publicity stunt. GM produced the F4F Wildcat and F8F Bearcat for the U.S. Navy during WWII, and Buick made engines for the B-24, Allison made P-38 and P-51 engines, too, so GM knows a little bit about planes.

Will this GM chopper come to be? Simcoe did say several other GM products would be coming, including: “A luxurious two-seater designed for you and someone very special. This is a special moment in the history of General Motors as we reimagine the future of personal transportation for next five years and beyond, leveraging technology to create a consistent GM brand promise, while also delivering an unrivalled range of electric vehicles across our brands, each with unique personalities that reflect the unique priorities of the millions of customers we serve. Even if you’ve never considered driving an electric car before, over the next five years GMC, Cadillac, Buick, and Chevrolet intend to present you with a vehicle that you’ll fall in love with. And there’s a good chance it will be an EV.”

It may even be a flying EV.