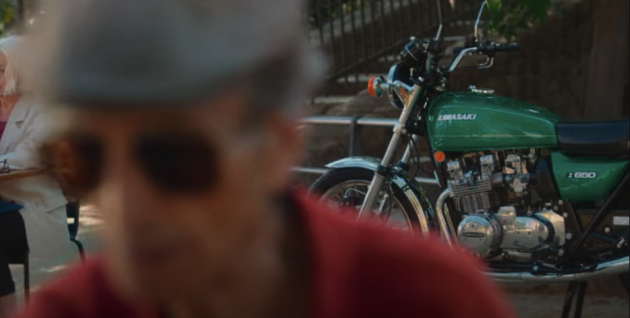 A few weeks ago we saw a teaser with the tagline “Retrovoloution” heralding an upcoming Kawasaki retro motorcycle. However, there was little to see of the new machine, save a glimpse of the wing mirror.

Now, another teaser video has been released with the same tagline and this time, there is a motorcycle. Unfortunately it is the original Kawasaki Z650 four-cylinder from the 1970s and it definitely from Kawasaki’s own or perhaps a museum collection.

Running for 26 seconds, there is nothing else to be seen, save a young man and an older gentleman playing chess outdoors. Thus, we can take the hint from the Z650 shown in the video that the new Kawasaki that is due to launch September 27 will be a 650 following the same retro styling as the Kawasaki Z900RS, perhaps.

Many are speculating the new retro bike from Kawasaki will be tagged the Z650 RS, and use the running gear from the current model Z650. Should this be the case, we can expect to see the liquid-cooled, parallel-twin from the Z650 making an appearance, displacing 649 cc and producing 68PS and 65.7 Nm of torque.

What do you think? Is a middleweight naked what the market needs, considering there are retro bikes such as the Royal Enfield Continental 650 available. Leave a comment with your thoughts and opinions below.