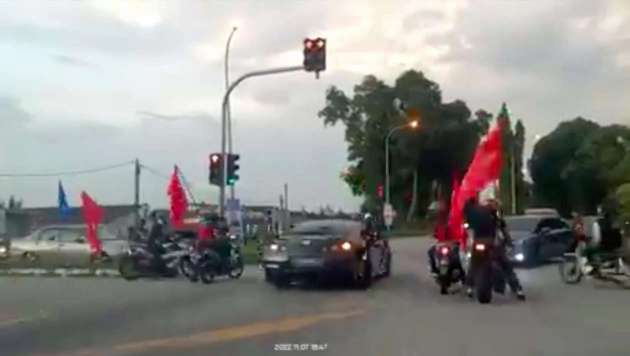 Negeri Sembilan police are looking for five individuals acting as convoy marshals.The group on motorcycles was recorded on video stopping traffic in Taman Desa Dahlia, Senawang, to allow a convoy of eight vehicles marked with the logo of a Malaysian political party.

According to a statement from Negeri Sembilan police chief Deputy Commissioner Ahmad Dzaffir Yusoff, the incident was detected through a video clip going viral on local social media. The riders are seen flying the flag of a political party and stopping traffic at the traffic light at the aforementioned location earlier this week.

Saying the action is dangerous to other road users, Deputy Commissioner Ahmad Dzaffir said police are now tracing all drivers and riders involved in the incident. “Their actions acting as a marshal to control and stop traffic is an offence under Section 21(1) of the Police Act, 1967,” he said.

Deputy Commissioner Ahmad Dzaffir explained such an offence is subject to a RM500 fine or a maximum six months jail, or both. “Per section 79(2) of the Road Transport Act, 1987 concerning disregard of traffic signals and directions, any individual committing an offence can be fined not less than RM300 and not more than RM2,000,” he added.

In his statement, Deputy Commissioner Ahmad Dzaffir urged political parties to obey the road traffic laws in the campaign period leading up to the 15th Malaysian General Election (PRU15).