The verdict: The 2020 Lexus UX 250h hybrid subcompact SUV drives like a small hatchback and has great gas mileage estimates, but a small cargo area limits its utility.

Versus the competition: Other small luxury SUVs from Audi, BMW and Volvo actually look more like SUVs, but none of them can touch the UX 250h’s exceptional fuel economy.

Some so-called SUVs stretch the definition more than most, and the 2020 Lexus UX 250h “SUV” is one of them. With a low ride height, hatchback shape and carlike ride and handling, the UX 250h doesn’t feel or look like an SUV. While calling it one may be the right marketing move in the hatchback-averse U.S. — and it does have all-wheel drive, unlike the front-drive-only UX 200 — Lexus isn’t fooling anyone.

The UX 250h starts at $35,525 (including a $1,025 destination charge), but we tested a top-of-the-line Luxury trim level, which starts at more than $40,000. Optional features on the car we drove included a head-up display, triple-beam LED headlights, front and rear parking sensors, rear automatic braking and a heated steering wheel, increasing its as-tested price to $44,555.

The UX 250h is powered by a gas-electric hybrid powertrain that makes 181 total horsepower. Instead of a driveshaft connecting the hybrid system under the hood to the rear axle, there’s an electric motor driving the rear wheels, which gives the UX 250h all-wheel drive. The setup is rated an EPA-estimated 41/38/39 mpg city/highway/combined — considerably better than the gas mileage estimates of AWD versions of the Audi Q3, BMW X1 and Volvo XC40, none of which offer a hybrid drivetrain.

The UX 250h is decently quick, accelerating up to highway speeds without much fuss. Its 2.0-liter four-cylinder gas engine, however, doesn’t sound great in the process; it’s as if there were an angry blender under the hood. High-speed passing power is modest, but the UX 250h’s hybrid drivetrain feels stronger overall than the UX 200’s gas-only powertrain, which is rated at 169 hp.

Lexus did a good job tuning the UX 250h’s suspension. The ride is comfortable over uneven pavement, and the suspension’s responses are controlled and refined, but with enough damping to avoid undue harshness. Despite the suspension’s comfort orientation, it manages to keep body roll in check. F Sport versions have firmer suspension tuning, and when we tested that setup in a UX 200, we thought the ride was choppy.

The UX 250h has light-effort steering and not much steering feedback, though switching to Sport mode adds some heft to the steering wheel. The brake pedal, meanwhile, has a spongy but predictable feel, without any abruptness as the system balances the regenerative and friction brakes.

The UX 250h’s diminutive size is apparent from the driver’s seat; the roofline is low, and I had just a half-inch or so of headroom to spare (I’m 6-foot-1). Over-left-shoulder views are almost completely obstructed by the large roof pillar next to the driver’s seat. Rear visibility isn’t great, either, which makes the standard backup camera even more valuable.

Comfortable front bucket seats are finished in simulated leather upholstery and have substantial side bolsters that help keep you in place in quick corners. They’re heated and ventilated in Luxury trims.

The UX’s backseat is more accommodating than you might guess; it’s reasonably comfortable for taller adults, if a bit short on legroom. The small rear doors, however, make getting out of the rear seat an ungraceful exercise.

The UX 250h’s cargo area is even smaller than I expected. The combination of a high cargo floor and low roofline result in a small space, measuring 17.1 cubic feet. The standard 60/40-split rear seat folds flat for more cargo space.

Lexus’ multimedia interface changes from vehicle to vehicle, and the UX 250h’s system incorporates some smart usability features along with some frustrating ones.

The console-mounted Remote Touch trackpad is one of the frustrating ones. It works like a laptop trackpad, controlling a pointer on the UX’s dashboard screen. The interface isn’t new, but it’s still not easy to use; navigating menus using a freeform pointer in a moving vehicle requires a lot of attention — attention better spent on the road and what’s ahead of you. 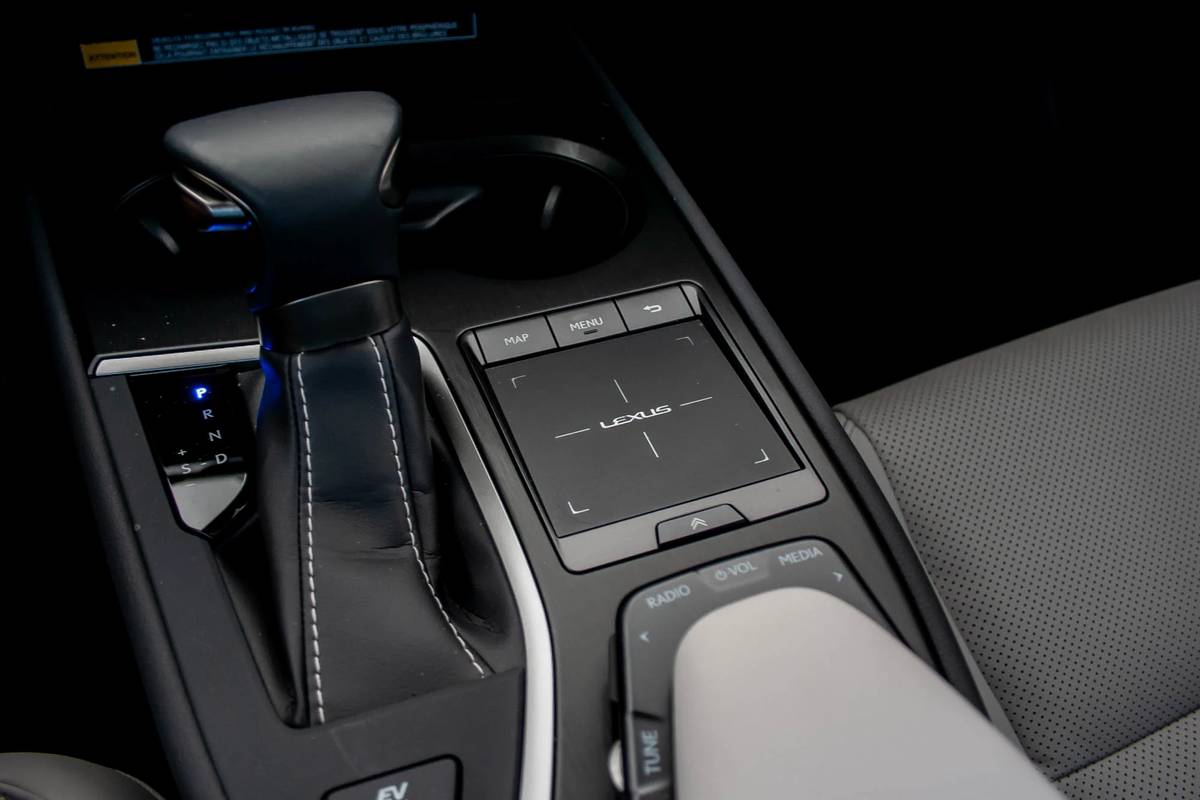 On the plus side, Lexus’ integration of volume and tuning thumbwheels on the front center armrest is a smart usability move. The controls are easy to use, located where a driver’s right hand naturally falls.

Apple CarPlay and Android Auto smartphone connectivity are standard — the latter being a new feature for the 2020 model year. Both interfaces are optimized for touchscreens, but the UX’s display isn’t a touchscreen; you have to use the console trackpad instead. My test vehicle had an available 10.3-inch display in place of the standard 7-inch one, and its screen clarity was good. With that setup, CarPlay uses the full width of the widescreen display.

The Lexus UX earned the Insurance Institute for Highway Safety’s highest rating, good, in all crashworthiness tests (based on a scale of good, acceptable, marginal or poor), and its standard automatic emergency braking system received a rating of superior (on a scale of superior, advanced or basic). IIHS also tested the UX’s standard bi-LED headlights and optional triple-beam LED headlights; the standard headlights were rated poor and the optional ones rated good.

Value in Its Class

The combination of a comparatively low starting price and impressive estimated gas mileage helps the UX 250h on the value front. Good driving manners are another plus. That said, the UX’s multimedia interface still needs some work, and one of the typical subcompact SUV trade-offs, limited cargo space, is especially apparent in this model. If you regularly carry people and cargo, a small luxury SUV like the BMW X1 would be a better bet.