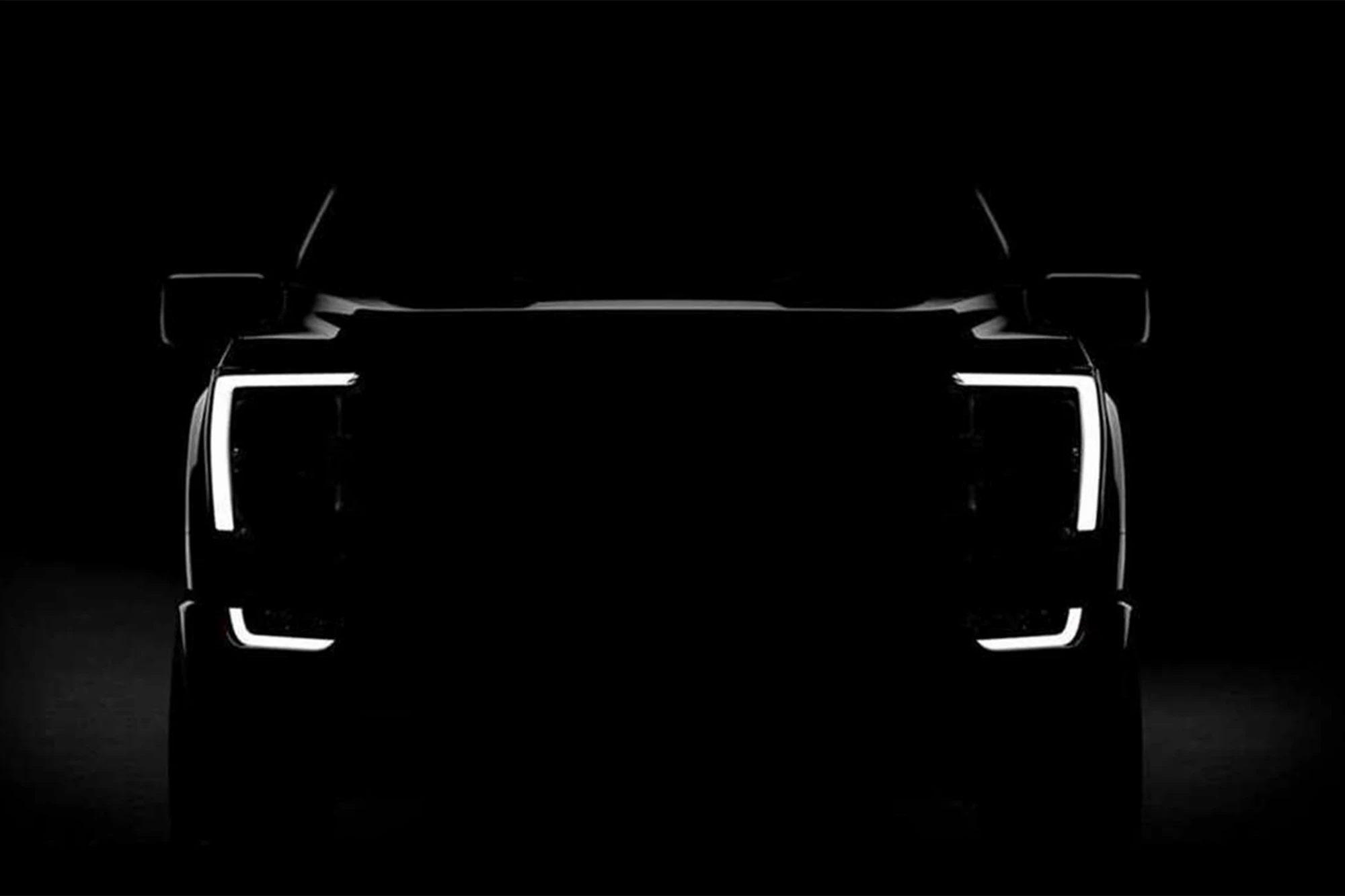 The extremely popular Ford F-150 is getting a redesign for the 2021 model year, which Ford will reveal to the world on Thursday. So far, we’ve only been given one official teaser image — see above — that doesn’t give us a whole lot of information to go on …

… Which means it’s time to do some (informed) speculating! Here’s what we know, plus a few things we expect from it ahead of its reveal, about the upcoming 2021 F-150.

1. The Headlights Are Different

The one official teaser image we’ve seen shows the darkened silhouette of the front of the new F-150 with illuminated headlights — and they look more like those found on the heavy-duty F-250, F-350 and other Super Duty trucks. The lights are thinner and bend at near-90-degree angles, bracketing the outside corners of the headlight assemblies.

2. An Electric Version Is Coming

Ford has previously teased the upcoming all-electric F-150 by showing the prototype — wearing the current-generation F-150’s body — towing a train full of other F-150s. While the impressiveness of that feat can be argued from a physics perspective (a Mini once towed an airliner), it generated a fair amount of buzz. Ford has since confirmed that an all-electric F-150 is coming by mid-2022, though it’s unknown if we’ll get a look at one during the new F-150’s reveal. Even if we don’t, it’s hard to imagine it will look markedly different from whatever we do see.

Prototypes of a hybrid F-150 have been spied on the roads in the past couple of years, and other news outlets have speculated that it could be a plug-in hybrid. The drivetrain and specifications of such an F-150 are unknown at this point, as is any indication whether or when one might appear.

2. It Should Be Nicer Inside

“Nicer” in this sense can have two meanings — technology and luxury — and we hope it’s both. Spy photos have shown a much larger infotainment screen in an F-150 test mule than the 8-inch screen offered in the current F-150, as well as a digital gauge cluster. Those would be significant steps toward improvement, depending on how widely available those features were.

What we haven’t seen is an indication that the interior design, materials and quality will challenge the Ram 1500, a truck with interiors so luxurious we named it our Luxury Car of the Year for 2020. Even if the new F-150 doesn’t surpass the Ram, however, there’s still lots of room for improvement.

3. It Probably Won’t Look That Different Outside

F-Series Pickups are the best-selling vehicles in the U.S., and Ford would very much like for that to continue with this new generation of F-150. A drastic change to a polarizing design might jeopardize that, so we expect changes to the exterior that are more subtle than, say, what GM did to the Chevrolet Silverado 1500 and GMC Sierra 1500 for their 2019 redesigns. Spy photos of the upcoming F-150 tend to back this theory up, though we can’t be certain of the final product until the official reveal.