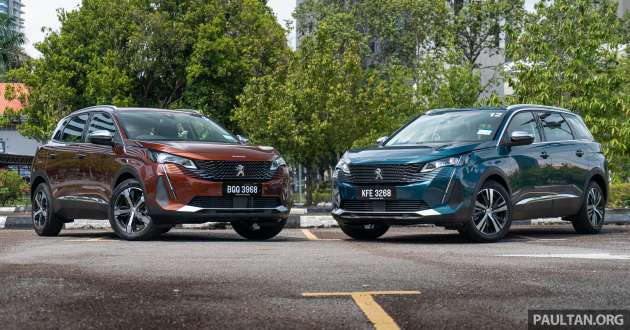 Bermaz Auto Alliance (BAuto), the newly appointed sole distributor for the Peugeot brand in Malaysia, has launched its first two SUVs – the 3008 and 5008 facelift. Both models will be available in the sole Allure trim, with the 3008 priced at RM161,616 and the 5008 at RM177,311. Both prices are inclusive of the sales tax exemption, which has been extended to June 30, 2022.

Included in the price is a five-year or 100,000 km manufacturer’s warranty (whichever comes first), as well as three-year or 60,000 km free service maintenance. Three standard colours are available – Amazonite Grey, Pearl White and Nera Black. The fourth exclusive colours are Cuprite Brown for the 3008 and Emerald Crystal for the 5008 (both pictured above).

Both the 3008 and 5008 are produced locally by Stellantis at its newly acquired Gurun assembly plant (formerly Naza Automotive Manufacturing) in Kedah, and the cars are said to be built to Peugeot’s global quality standards. BAuto is only involved in distribution and aftersales, so all manufacturing operations are controlled by Stellantis.

Mechanically, the SUVs are set up exactly the same from before, so under the bonnet is a direct-injection 1.6 litre THP (Turbo High Pressure, not the newer PureTech mill) four-pot that generates 167 PS and 240 Nm of torque. A six-speed Aisin-made gearbox sends drive to the front wheels, and there is rotary dial (Advanced Grip Control) to choose between five traction modes, including Snow, Mud, and Sand.

New to the pair are of course the redesigned front fascia, featuring a more expressive frameless grille and reprofiled full LED lights (with auto high beam and 90-degree cornering function) with vertical LED DRLs. The 3008 and 5008 numerals on the bonnet is new, making them slightly more identifiable from the front.

Changes at the back are less extensive compared to the front, but new here are the full LED tail lights, replete with three-dimensional claws and sequential turn indicators. This is quite the upgrade from before, though it should be noted that there are no sequential indicators up front. Also standard are things like the height-programmable powered tailgate with a kick sensor, as well as six front and rear parking sensors.

Inside, the i-Cockpit consists of a 12.3-inch digital instrument cluster that has been upgraded with slightly better graphics and contrast, as well as a wider 10-inch touchscreen display. The latter offers Apple CarPlay and Android Auto support, though this still requires a physical wired connection via a USB-A port. No new trim materials here, but it does come with new seat stitching, as well as a wireless charging tray for Qi compatible devices as standard.

Not much else is new besides the slightly expanded safety kit, which we’ll get to further below. Other standard interior features include a powered panoramic sunroof, dual-zone automatic climate control (5008 gains an additional blower control for the rear vents), electrochromic rear-view mirror, column-mounted paddle shifters, blue LED ambient lighting, and a cooled storage area within the centre armrest.

In case you don’t know the difference between the two, the 3008 is a five-seater SUV, whereas the 5008 seats seven (5+2, really) – much like the now-discontinued regular Tiguan and Tiguan Allspace. Boot space for the 3008 is 591 litres, whereas the 5008 boasts 952 litres of space with the third row folded flat.

For the safety features, both the 3008 and 5008 still miss out on key driving aids such as adaptive cruise control and autonomous emergency braking. There’s only blind spot monitoring, active lane keeping assist, driver attention warning, and hill descent control. Airbag count remains at six, and the wide-angle reverse camera is still painfully low-res as before.

So, what do you think of the updated French SUVs? Feel free to browse CarBase.my for a more detailed look at the pair’s equipment and specifications. You can also compare them against other vehicles of your choosing!