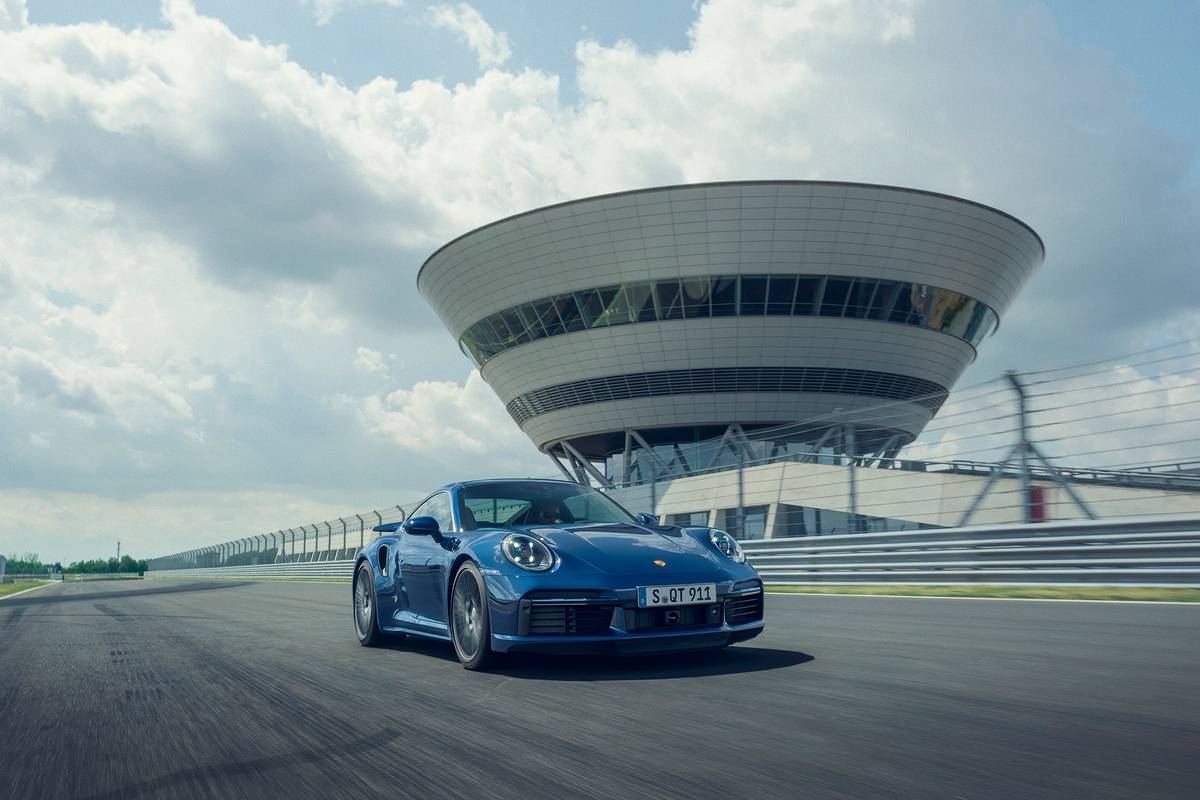 The inexorable march of 2021 Porsche 911 trim levels continues apace, with the new 911 Turbo joining the (deep breath) Carrera, Carrera 4, Carrera S, Carrera 4S, Targa 4, Targa 4S, Targa 4S Heritage Edition and Turbo S … whew. Oh, and everything but the Targa versions is also available as a coupe or convertible. And we’re still waiting on GT3 and GT2 RS versions, plus whatever else Porsche decides to do with the 992 generation of 911.

With the new 911 Turbo coupe and cabriolet, Porsche has its most powerful incarnation of this variant yet, with outputs equivalent to the previous 991 generation’s 911 Turbo S. It can also be equipped with many of the new features Porsche first unveiled on the more powerful Turbo S.

The new 911 Turbo is nearly 2 inches wider at the front and more than three-quarters of an inch wider at the rear than its predecessor, which allows it to accommodate wider front and rear tracks — 1.65 inches and 0.39 inch, respectively — as well as wider front and rear tires. The front tires are now 10.0 inches wide, up from 9.6, and the rears are 12.4 inches, up from 12.0. Like the Turbo S, the Turbo wears staggered-diameter wheels, with 20-inch front wheels and 21-inch rears.

Other exterior features include the Turbo’s signature air intakes on the rear fenders — now for feeding the engine instead of for cooling purposes — as well as a large rear spoiler and larger front spoiler. LED headlights and taillights are standard, and an optional Sport Package adds black and carbon-fiber elements as well as clear taillights.

Standard features include a 10.9-inch multimedia display, Bose stereo and 14-way power sport seats, along with a sport steering wheel and Porsche’s Sport Chrono Package. Optional interior features can add more technology and comfort features — including a Burmester premium stereo, Porsche’s InnoDrive with adaptive cruise control and traffic jam assist, and more — or move towards a more hardcore performance machine with the Lightweight Package, which shaves off 66 pounds of weight thanks to reductions in sound insulation, the deletion of the rear seats and installation of full bucket seats.

A 3.8-liter turbocharged boxer-six-cylinder engine powers the Turbo, making 572 horsepower — 32 hp more than the 991 Turbo — and 553 pounds-feet of torque. Both the coupe and cabriolet are 0.2 second faster from 0-60 than their predecessors, completing the sprint in 2.7 and 2.8 seconds, respectively. “Top track speed” for both coupe and cabriolet is 198 mph, down from the Turbo S’ 205-mph top speed. A sport exhaust is optional.

Your 911 Turbo will come with an eight-speed PDK dual-clutch automatic transmission or … actually, that’s it. No manual transmission here. Torque-vectoring all-wheel drive is standard, as is rear-axle steering.

For stopping power, the standard brakes are larger in front than the 991 Turbo, and Porsche’s carbon-ceramic composite brakes — standard on the Turbo S — are optional. An adaptive suspension is standard, with an optional adaptive sport suspension that lowers the ride height by 0.39 inch. Porsche’s Dynamic Chassis Control system is optional.