When the Ford F-150 Lightning rolls off the production line next year, the electric truck won’t be the first American EV, but it will be one of the most important ever produced. Not only because it bears the name of one of the most successful vehicles in automotive history, the F-150, but because it’s a pickup truck, the most popular vehicle in America.

The top three selling vehicles in America are trucks, and the F-150 has been at the top of that list for 44 years. In addition, the electric truck has a very reasonable starting price for an EV and is coming from a legacy automaker that’s been building trucks for decades in America.

The F-150 Lightning won’t enter the market unrivaled, it will be entering the very new and very competitive electric truck segment. The Rivian R1T truck coming out this Summer looks very promising but since it’s a start-up company, it doesn’t have brand loyalty like the Blue Oval does. The Tesla Cybertruck should also start production this year, but because of its extreme design, it doesn’t appeal to some truck buyers.

Another American company, GMC, will also have an electric truck this year, but the Hummer EV is a six-figure vehicle. The majority of the population won’t be able to afford it. Comparing the real-world capability and sales of the above electric trucks will be interesting, but we have to wait until they are in production.

4X4 And Super Crew For All

Thanks to the F-150 Lightning’s dual-motor layout (one on each axle), all models of the Lightning come with 4×4 (AWD since it’s full-time and not selectable). The Super Crew cab with the short 5.5-foot bed will be the only configuration the Lightning is offered in. We don’t know if other body configurations will be offered later in production. Four drive modes are also standard on all models: Normal, Sport, Off-Road, and Tow/Haul. The Lightning is the first F-Series to have independent rear suspension. 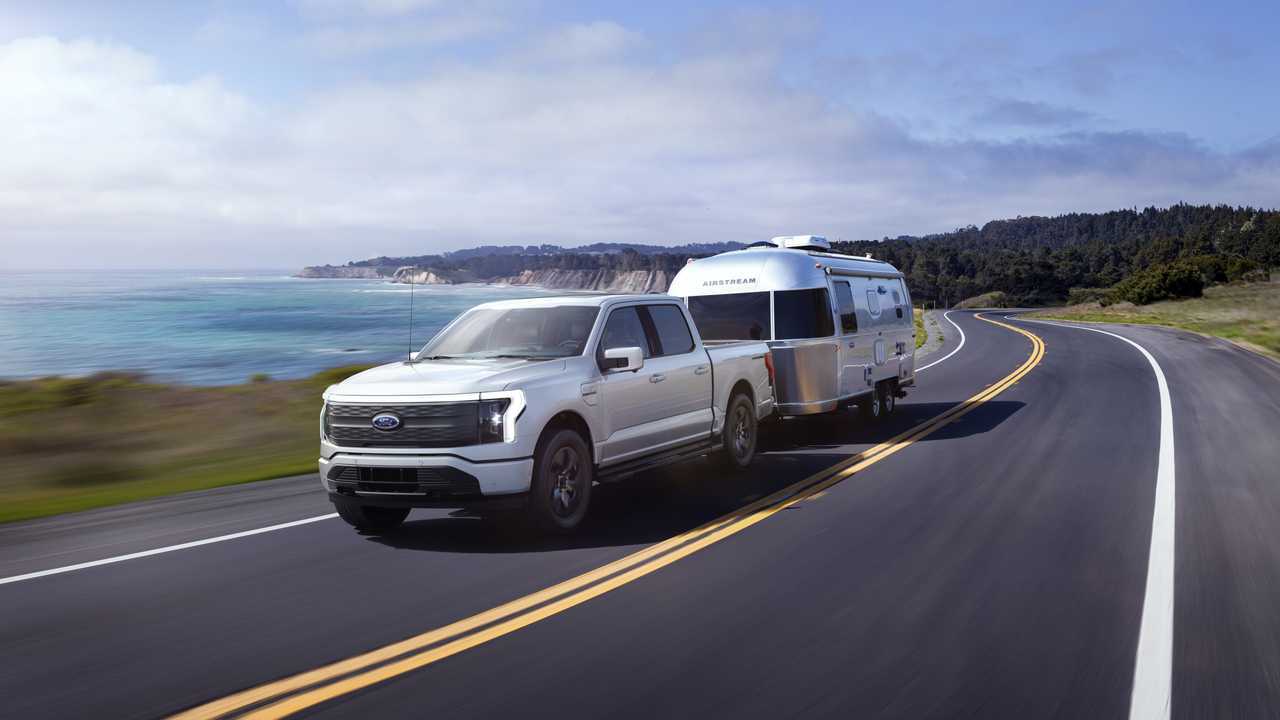 Ford put the F-150 Lightning through the same testing regiment as every other F-Series pickup truck. It includes endurance towing testing up and down long and steep grades. The Lightning has a “military-grade aluminum-alloy body” and a new frame that’s beefier than the gas version because it has to carry the 1800-pound battery pack. Underbody protection with metal skid plates guarding the battery and motors are there when things get rugged.

Unfortunately, we’ll have to wait for battery pack size information because Ford hasn’t released that yet. When Ford releases it, they will likely also say if the truck’s electrical architecture is 400 or 800 volts. But, we do know that the Lightning’s battery is a lithium-ion pouch style cell with nickel, manganese, and cobalt cathodes. The battery assembly location is at Ford’s Rawsonville Components Plant in Michigan.

As for the driving range, there will be two battery pack options: a standard range and an extended range. Ford says the standard range model of the Lightning is targeting an EPA range of 230 miles (370 km) and is aiming for a 300-mile (483 km) range for the extended-range version. As for one-pedal driving, it’s selectable. 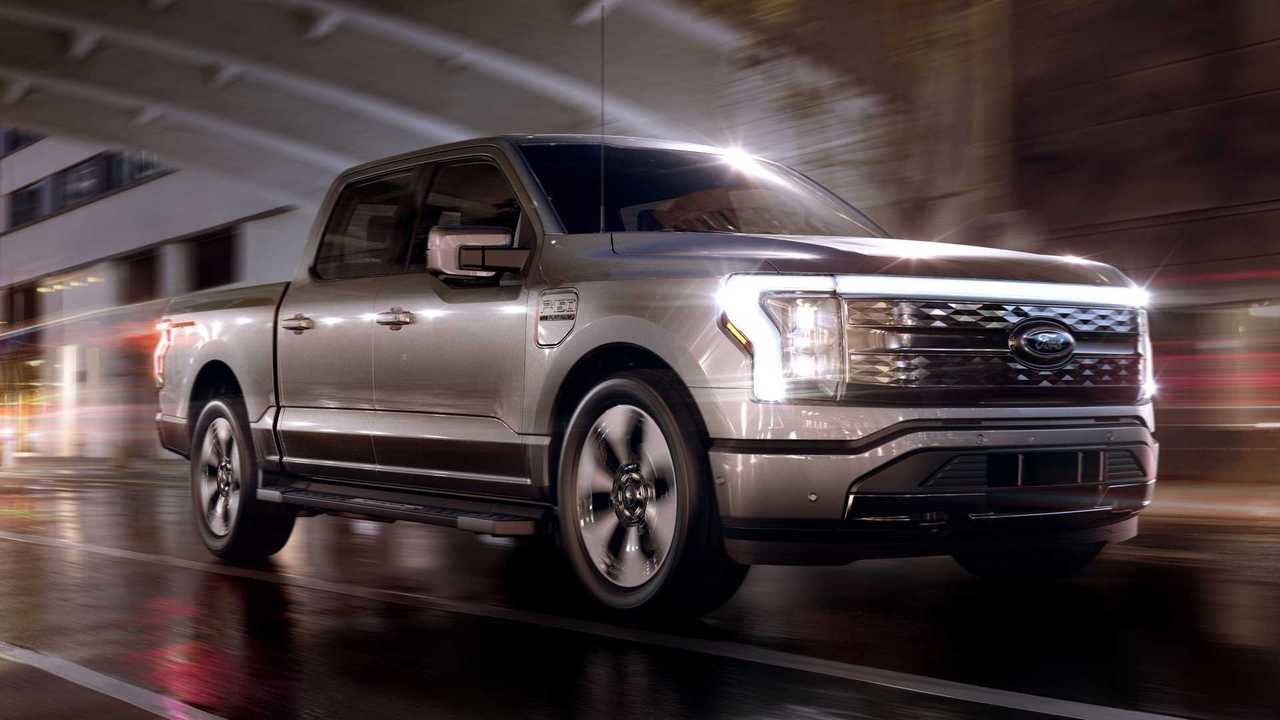 The Blue Oval says it’s targeting 426 horsepower (318 kW) in the standard-range model and 563 hp (420 kW) with the extended-range battery pack. Torque is a healthy 775 lb-ft (1051 Nm) with either battery pack. Ford doesn’t state a 0-60 mph time for the standard range model (it will likely be in the 5-second range) but it claims the extended-range model will hit 60 mph in the mid-4 second range. President Biden said 4.4 seconds when he drove it yesterday.

In the standard-range model, except a payload capacity of up to 2,000 pounds and a maximum towing capacity of 7,700 pounds. The extended-range version’s maximum payload is a little less at 1,800 pounds, but the towing capacity is significantly higher at 10,000 pounds with the Max Trailer Tow package. But that’s not all, there is also the frunk with its 400-pound maximum capacity.

For comparison, the EcoBoost F-150 with the 3.5-liter V-6 has a towing capacity that ranges between 11,000 and 14,000 pounds with the appropriate towing package. The maximum payload capacity for this gas model ranges between 2,050 and 3,250 pounds.

A new feature for hauling that the Lightning has available is Onboard Scales, which uses sensors to estimate the payload in the bed for the driver. The truck will automatically adjust the driving range based on the weight of the payload. The Pro Trailer Hitch Assist system is an available towing feature that makes hitching a trailer easier by automatically controlling the steering, throttle, and brakes for the driver. 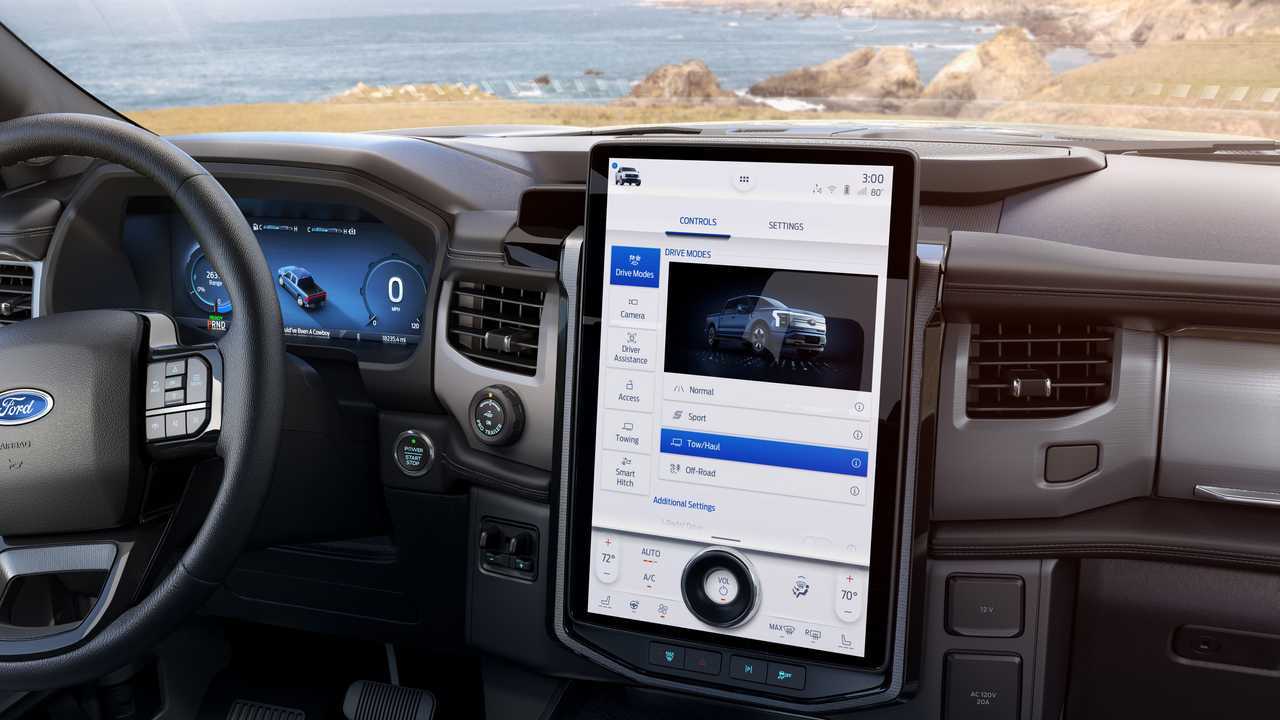 The F-150 Lightning is currently the first electric truck to offer dual onboard chargers for Level 2 charging. However, it’s only offered on the extended-range model and has a max rate of 19.2 kW. The standard-range model has a single 11.3-kW onboard charger.

As for DC fast charging, Ford hasn’t released the Lightning’s maximum charging rate, but it’s at least 150 kW. Using a DC fast charger at that rate can charge the battery from 15 to 80 percent in 44 minutes (41 miles per 10 minutes) in the standard range and 41 minutes (54 miles of range per 10 minutes) in the extended-range model. A slower 50-kW charger will take 91 minutes in the standard range and 122 minutes in the extended range to get to 80 percent from 15 percent.

Ford Intelligent Backup Power is an all-new feature debuting in the F-150 Lightning. It tuns the Lightning into a backup power source if the power in your home goes out thanks to the EV’s ability to offload 9.6 kW of energy.

In order to get this new feature, you need the 80-amp Ford Charge Station Pro and a home management system that Ford can help install. When the power goes out, the Lightning automatically starts powering your house, and once power is restored, the electric truck will go back to charging its battery again. Ford says the extended-range model’s battery pack can provide full-home power for up to three days, or as long as 10 days if power is rationed (this is based on average home use of 30 kWh of power per day). Ford doesn’t mention it, but these numbers are likely based on a fully charged battery pack.

Ford has another clever all-new feature:

“In the future, Ford will introduce Ford Intelligent Power, which can use the truck to power homes during high-cost, peak-energy hours while taking advantage of low-cost overnight rates to charge the vehicle in time for your morning drive. This can help save money on electricity that powers your vehicle and home while also taking pressure off the grid in peak usage times.” 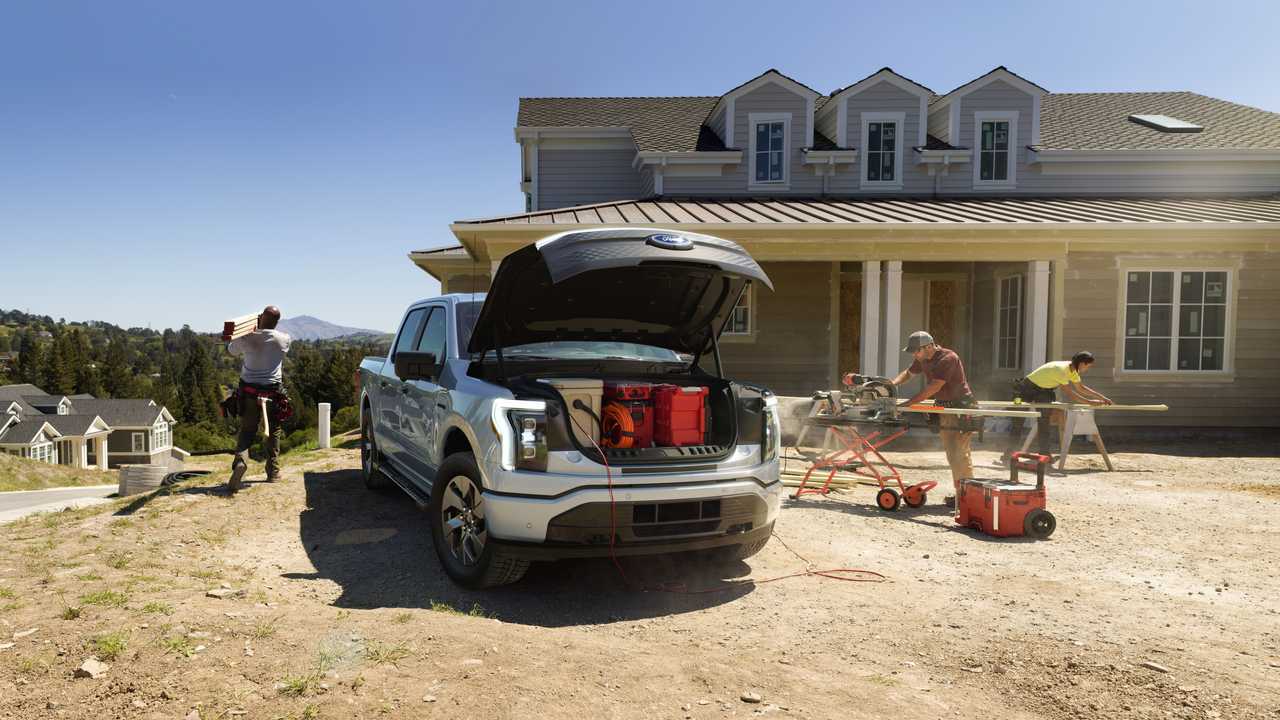 Ford calls it a “high-tech mega power frunk,” and that’s pretty accurate. With 14.1 cubic feet (400 liters) of storage and 400 pounds of payload, it’s easily the most impressive frunk in the market. But there’s more.

The frunk is water-resistant, equipped with four electrical outlets, two USB chargers, and it can also be used as an ice chest for food and drinks due to the drainable floor. The funk can also provide up to 2.4 kW of power, which is enough output to plug in power tools, TVs, speakers, crock pots, and more. Taking advantage of the frunk would be easy at a job site or tailgate party.

The Lightning’s Pro Power Onboard includes built-in electrical outlets that are able to power a variety of power tools and electronic devices like laptops. Power output starts at 2.4 kW in the base trim with the option for additional power. However, the higher trims come standard with 2.4 kW of power available through the frunk and an additional 7.2 kW of power through outlets located in the bed and cab. What’s nice is that the truck monitors the power usage and will notify you:

“Customers receive a FordPass notification if their truck’s battery falls below one-third of its total range, and they can even set the truck to stop using Pro Power Onboard if the battery level approaches the distance to the nearest charging station.” 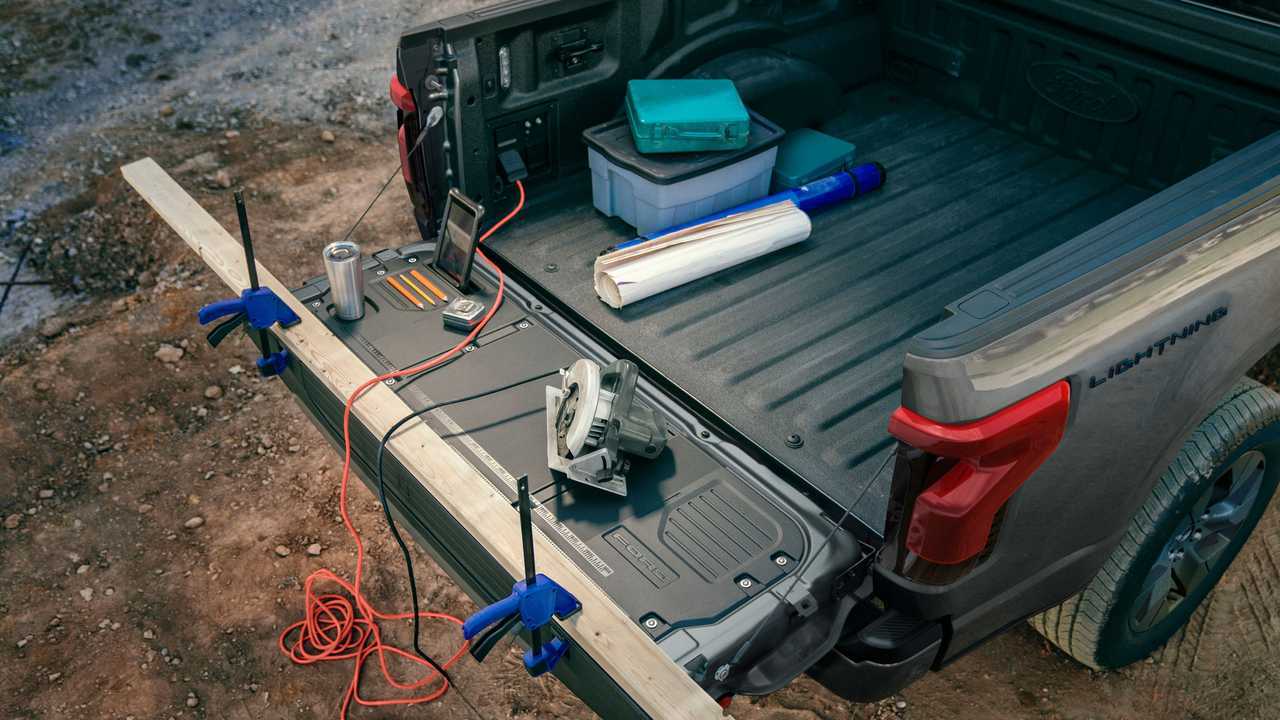 Sync 4A will make its appearance on a truck for the first time in the F-150 Lightning, but only on the higher trims. The system features a large 15.5-inch touch screen (portrait orientation), voice commands, cloud-connected navigation, integrated Amazon Alexa, App Link apps, and wireless Apple CarPlay and Android Auto. The base trim will come equipped with Sync 4 (no A for awesome), which instead includes a 12.0-inch touch screen (landscape). All trims come standard with a 12.0-inch digital driver’s display, a 360-degree camera system, and a 4G LTE Wi-Fi hotspot. Two B&O audio systems are optional.

F-150 Lightning owners will have access to more than 63,000 public charging stations across the US, including Electrify America’s network of DC fast chargers. Ford says the payment is seamless with the Ford Pass app. Also, figuring out when and where to charge during your road trip is easier with Ford Pass Power My Trip. The system figures the best route to take based on the availability of charging stations.

Ford’s F-150 Lightning will feature an advanced driver assistance system (ADAS) called Blue Cruise. It’s part of the available Ford Co-Pilot 360 Active 2.0 package, which also includes a self-parking system. The system is similar to GM’s Super Cruise in the sense that it offers hands-free driving and has a driver-facing camera that monitors the driver. Ford says it will work on more than 100,000 miles of “pre-qualified” divided highways in the US and Canada. In the future, “Blue Zones” will allow for additional hands-free driving locations. 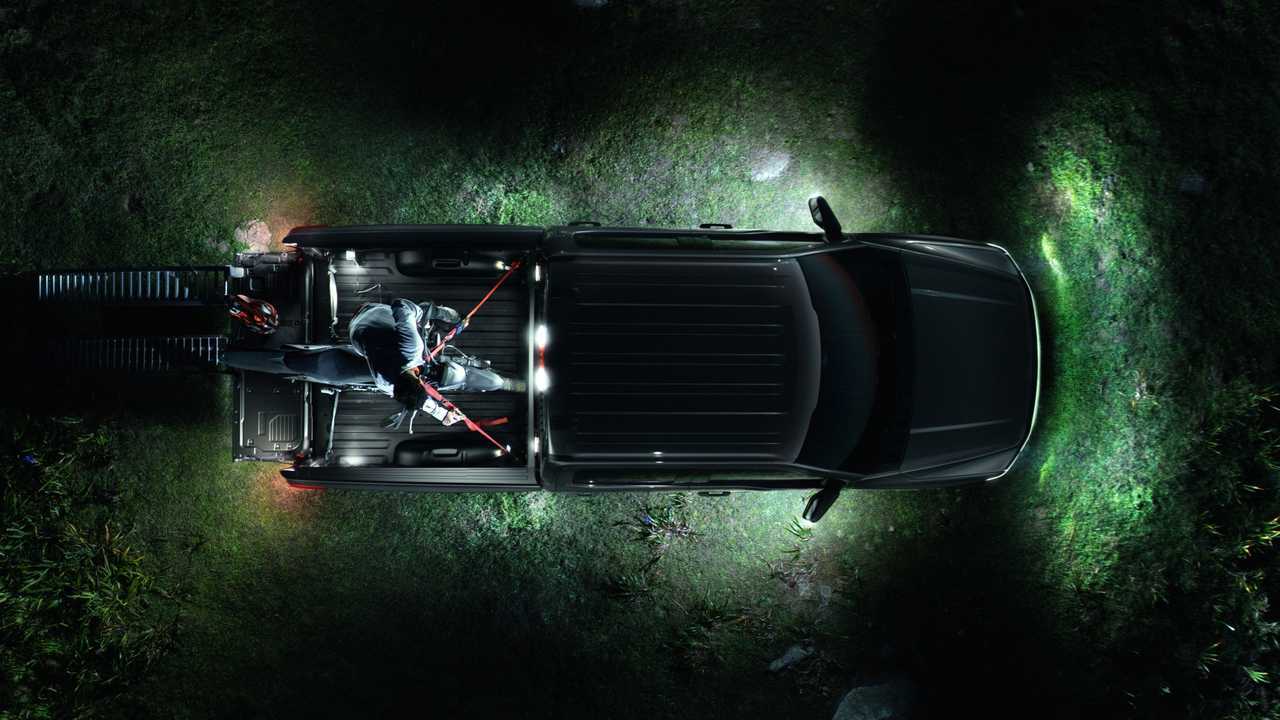 The Ford F-150 Lightning will enter production in the Spring of 2022 and will be sold at more than 2,300 EV-certified dealerships across the country. Considering that it’s an electric truck with AWD, a Super Crew cab, and a nice list of standard features, the Lightning has a low starting price of $39,974 before any government or state tax incentives. For comparison, a two-wheel drive, regular cab F-150 with the base V-6 engine starts at $28,940.

Trim levels start with XLT and include Lariat and Platinum as well. There will also be a work model for commercial fleets.

The F-150 Lightning will be built in the Rouge Electric Vehicle Center in Michigan, where Ford is investing $700 million and adding 500 more jobs.

The Ford F-150 Lightning will start at $39,974 before any incentives or destination and handling. Top-spec Lightning models will cost $90,000.

Maximum speed is still in question, but the base F-150 Lightning should be able to hit 60 miles per hour in about five seconds, with the added power of the extended-range model dropping that number to the mid-fours, according to Ford.

The F-150 Lightning is available in one body style: a four-door SuperCrew with a 5.5-foot cargo box (the volume configuration for the internal-combustion F-150).