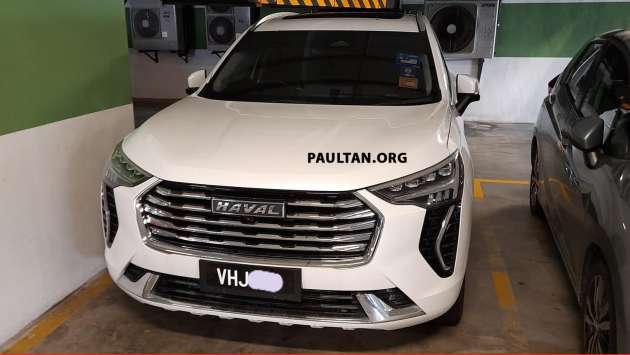 The Haval Jolion has been spotted in Malaysia once again, this time by a reader in Petaling Jaya. This is the exact same unit that was seen last November, and will likely be launched sometime this year.

A seven-speed dual-clutch transmission sends drive to the front wheels, returning an average fuel consumption of 8.0 litres per 100 km. In some markets, the Jolion gets four drive modes – Standard, Eco, Sport and Snowfield.

It’s unclear whether the more sophisticated hybrid version will make it to our shores, but it’s quite unlikely. In Thailand, the Jolion Hybrid uses an electrified 1.5 litre turbocharged four that makes a combined 190 PS and 375 Nm of torque, with a DCT sending all that power to the front wheels.

The interior has a rather upmarket feel as well, complete with features such as a head-up display, seven-inch multi-info display, freestanding widescreen display (either 10.25- or 12.3-inch units) with Apple CarPlay and Android Auto support, rotary gear selector dial, and black leather seats with contrast white piping.

A leather-wrapped three-spoke multifunction steering wheel is visible, though it remains to be seen if it gets a wireless smartphone charging tray and rear air vents. Boot space measures 337 litres, which expands to 1,133 litres when the rear bench is folded flat.

All this is possible thanks to Great Wall Motors’ new LEMON platform, which allows the Jolion to be bigger than the H2, and more engaging to drive. The platform is lighter, and is said to increase steering accuracy by 16% and lateral stiffness by 15%, reduce centre of gravity by 30 mm and pitch angle by 50%. So, anyone interested in this Haval?