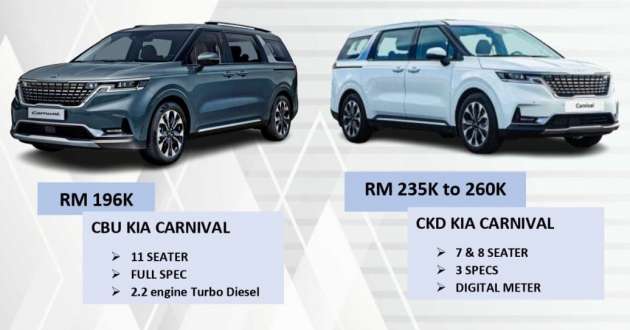 It looks like the locally-assembled Kia Carnival will finally be launched soon. A dealer in Seri Kembangan, AZ Master Motor, has announced on Facebook that the CKD MPV is open for booking, five months after the car arrived in Malaysia in fully-imported form.

An estimated price range was included in the flyer provided, and contrary to common practice, the CKD model is actually more expensive than the CBU. And quite a bit more at that – the new model, which will be offered in three variants, is estimated to be priced between RM235,000 and RM260,000. Contrast that against the existing imported version, which slides under the RM200,000 barrier at RM196,341.

The reason behind this price hike is that Kia Malaysia has listened to customer feedback and specced the Carnival as a seven- or eight-seater, which should provide more interior legroom and a less compromised seating layout (plus three-point seat belts for all passengers). The car was initially brought in as an 11-seater, allowing it to be classified as a commercial vehicle – affording it lower taxes as a result.

At least the car should come with a greater level of equipment to offset the higher pricing. While specifications and equipment have yet to be revealed, the dealer has confirmed that the CKD model will be offered with the available 12.3-inch digital instrument display, which is sorely missing in the CBU car. Hopefully some driver assistance features like autonomous emergency braking will be added, too, as these were also omitted.

Expect the Carnival to soldier on with the same 2.2 litre R turbodiesel engine as before, producing 202 PS and 440 Nm of torque and mated to an eight-speed automatic gearbox. Read our review of the 11-seater version here.