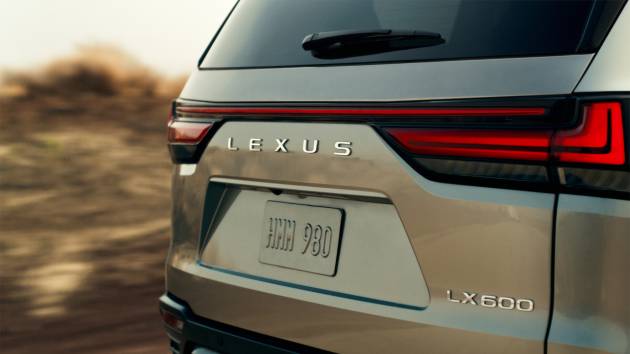 Lexus has previously stated that there will be one more new model debut to come for this year, and it is now official – the next-generation LX luxury SUV will premiere October 14.

The LX carries on the tradition of tradition of being based on the Toyota Land Cruiser, the latest of which made its debut in June this year and employs Toyota’s GA-F platform for reduced weight and increased rigidity; 200 kg has been saved from the Land Cruiser’s overall weight, Toyota said at the time.

As tends to be the case with teaser footage, the star vehicle flashes by in a blur, though a still image of the LX rear end reveals a full-width light bar that joins both main tail lamp assemblies, which have also been restyled from those on the Land Cruiser.

In terms of variants at launch, Creative Trend from Japan has rumoured that the LX range will be crowned by the LX 750h, which as the suffix indicates, is an electric motor-assisted 3.5 litre petrol V6 packing 480 hp and 871 Nm in total system output. The LX 600, as depicted above, will offer the petrol V6 on its own, and is rated at 409 hp and 650 Nm of torque.

As befits its positioning, the Lexus LX will also pack even more luxury than the Land Cruiser, and is set to receive the latest version of the infotainment setup as found in the 2022 NX.

The infotainment touchscreen in the NX measures 14 inches across, and this could grow to 17 inches for the range-topping LX, according to Creative Trend, its larger dimensions accommodated by the greater real estate of the Land Cruiser-derived body. Also rumoured to join the luxury kit list in the LX is a fingerprint scanner for starting its engine.

Internal information sourced by the Japanese website stated that the LX is set to go on sale in December in selected markets, following its official debut.

As for the Land Cruiser that the LX is based on, the big Toyota arrived in the Australian market in six variants, all powered by the 3.3 litre V6 turbodiesel producing 309 PS and 700 Nm of torque. This is paired with a 10-speed automatic transmission, offering a wide range of ratios to benefit both off-roading torque and fuel economy.

The Land Cruiser has turned out to be a fast favourite. Around 20,000 pre-orders were received as of September, surpassing actual deliveries by 400%, and compounded by the global semiconductor shortage, the wait list for the latest Land Cruiser could reach up to four years.