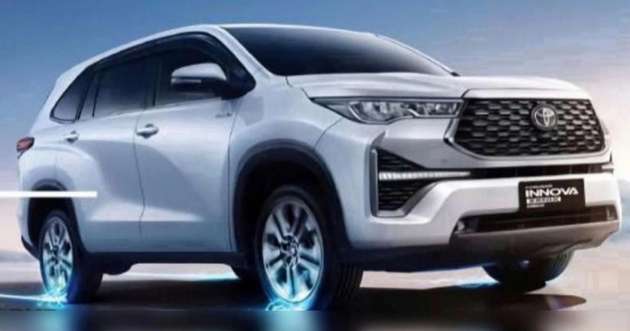 Initially tipped for its debut today, November 17, it appears that some leaked images of the 2023 Toyota Innova Zenix have beaten Toyota to the punch following the carmaker’s confirmation earlier this month of the new MPV’s arrival.

First seen in teaser images released by Toyota last month, the third-generation Innova will use the Toyota New Global Architecture (TNGA) in place of the outgoing second-generation model’s ladder frame chassis, which means that the three-row MPV will switch to a transverse engine layout for a front-wheel-drive configuration, from its predecessor’s longitudinal engine, rear-wheel-drive layout.

The leaked image now essentially shows the face of the Innova Zenix in its entirely, confirming that which was shown in part in spy images from Kompas earlier this month, where the slimmer, angular headlamps bookend the hexagonal grille. 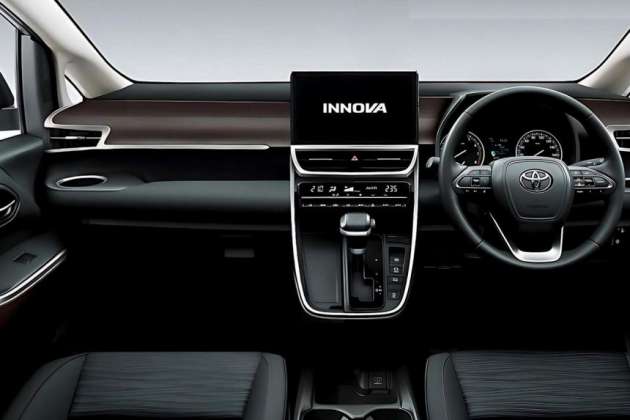 We can now also see that the space just below the grille is occupied by long, horizontal LED daytime running lights, while further rearwards, the new sculpting of the bodywork on the sides makes the new Innova Zenix appear more SUV-like compared to the traditional MPV look of the outgoing second-generation model.

Accompanying the leaked exterior image is one of the MPV’s interior, which reveals a dashboard that is now much more pronounced in its vertical and horizontal elements, compared with the curves of the second-generation Innova’s dashboard. A panel of a contrasting colour still bisects the dashboard, albeit now at a higher position compared to that of the outgoing model.

The gear selector is now dashboard-mounted rather than on the lower transmission tunnel of before, possibly a legacy of that model’s ladder-frame roots, and now the Innova Zenix also sports a larger floating infotainment screen atop the dashboard.

The rear half of the cabin is still to be revealed, though the aforementioned shift to the TNGA base that is of a transverse FWD driveline layout should offer gains in interior space, compared to the previous model which needed to make room for its prop shaft to the rear wheels.

Once again revisiting the leaked image which has been rendered with blue elements at its wheels, this could imply electric drive, and the Innova Zenix has in fact been confirmed to receive a hybrid powertrain. One such configuration already on the market is that of the Corolla Cross Hybrid which is also TNGA-based, and that employs a 2ZR-FXE 1.8 litre Atkinson-cycle four-cylinder engine making 98 PS and 142 Nm, mated to a 72 PS/163 Nm electric motor and eCVT transmission.

More will be known about the 2023 Toyota Innova Zenix very soon, now that a full view of the vehicle has been leaked. Rumour has it that the official unveiling has been pushed to November 21; in any case, stay tuned for more on Toyota’s upcoming seven-seater.