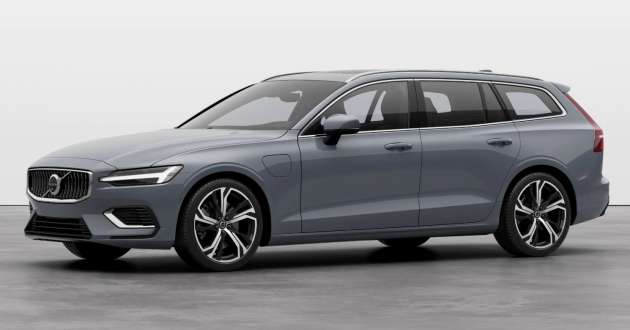 Volvo Car Malaysia (VCM) has updated the V60 for the 2023 model year, with the station wagon now being offered in a sole Recharge T8 Ultimate variant that replaces the previous Recharge T8 Inscription. This is in line with the Swedish brand’s recent decision to revise its trim level offerings, which has also been applied to the XC40.

The asking price for the Recharge T8 Ultimate is RM321,888 on-the-road without insurance, making it RM16,000 more than the Recharge T8 Inscription – the latter already had its price increased to RM305,888 following the end of the SST exemption.

In terms of equipment, the V60 now comes with a new infotainment system powered by Android Automotive OS that is linked to a nine-inch, portrait-format touchscreen inside the cabin. With it, you get to enjoy built-in Google services such as the Google Assistant, Google Maps and Google Play Store.

These services, including the Volvo Cars App remote functions, require a subscription in the form of the Digital Service Package (DSP) that is included in the asking price for a period of four years before a renewal is needed. You’ll still get a dual-zone climate control (with Clean and a 600-watt Harman Kardon sound system, although the number of speakers has been reduced from 16 to 14.

As for upholsteries and décor trims, two pairings are available, with the first being Maroon Brown Moritz leather and Linear Lime décor, while the other option is Charcoal Moritz leather with Metal Mesh décor. Both are available for the V60, regardless of the exterior chosen, of which there are four choices: Crystal White, Onyx Black, Thunder Grey and Bright Dusk (replaces Bright Silver).

On that mention, the Recharge T8 Ultimate retains the chrome-heavy look of the previous Inscription as well as a panoramic sunroof. The wheels are new though, being 19-inch five-triple-spoke black diamond-cut alloys with 235/40 profile tyres instead of five-multi-spoke units. Additionally, you won’t find integrated twin tailpipes in the rear lower apron.

The rest of the kit list is pretty much identical to before, including powered front seats with memory function, a head-up display, a 12.3-inch digital instrument cluster display, a 360-degree camera, adaptive LED headlamps, roof rails, keyless entry and start and an Orrefors crystal gearknob.

The plug-in hybrid powertrain also gets an upgrade for MY2023 with a total system output of 462 PS and 709 Nm of torque – it was previously 407 PS and 640 Nm. The all-wheel drive setup includes a 2.0 litre turbocharged and supercharged four-cylinder petrol engine that acts on the front wheels through an eight-speed automatic transmission with Geartronic, while an electric motor is fitted to the rear axle.

Running on electricity alone, you’ll get 90 km of range, which is substantially more than the 49 km offered by the departed Recharge T8 Inscription. This is thanks to a larger 18.8-kWh battery that VCM promised in April, which is more than the previous 11.6-kWh unit. Charging the battery takes five hours with a 3.7 kW AC charger (Type 2 connection) and 13 hours using a domestic socket. As before, the V60 comes with a five-year, unlimited-mileage warranty as well as an eight-year, 160,000-km warranty for its PHEV battery.