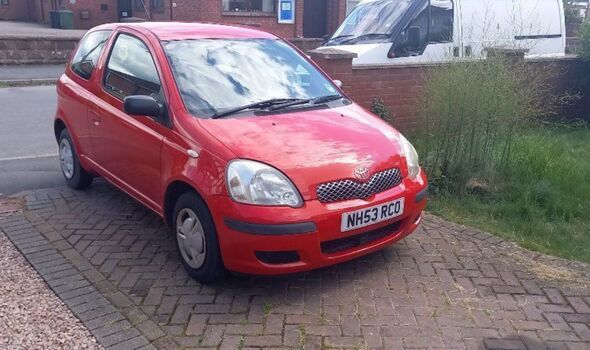 With the average family now having to fork out more than £1,200 a year for petrol and fuel hitting a staggering £2 per litre in parts of the UK, another way into motoring is to cut the cost of the car itself. There are many more than passable used cars available for less than £1,000 – and plenty you wouldn’t be ashamed to be seen in.

Express.co.uk scoured Auto Trader to find bargain bangers that are not only under a grand to buy but also less than £200 a year to tax and insure. As a bonus, all the cars below are ULEZ-exempt, have never been categorised as damaged and have all covered fewer than 100,000 miles.

Ok so the neighbours won’t be eyeing your new purchase up with envy. But you’ll have plenty of cash left over to buy a taller fence.

2004 Toyota Yaris – £995
If you want reliability then Toyota is pretty much the dictionary definition, and while this little runabout is pretty much the opposite of the recent GR Yaris hot hatch, it will still probably be starting and running sweetly well after the apocalypse or the striking of an errant meteor.

This one has been well looked after, is cheap to tax and insure and will do almost 60mpg on the motorway, which will handily distract you while you cling to the wheel terrified by the huge lorries.

2006 Suzuki Wagon – £975
There’s quirky, then there’s really quirky, then several quirkies later you get to this. It might look like someone put a Dacia into a hot wash by mistake but it will probably never ever break down and if you’re tiny it might feel like you bought an expensive SUV.

Admittedly the plus points pretty much end there, but you certainly won’t see another one on the road while you’re driving it and does have a radio with a button that just says ‘OK’ on it, which sums things up to be honest.

2006 Ford Fiesta – £995
There aren’t too many four-door cars at this price point that meet all the criteria, but this Fiesta will comfortably fit a small family in comfort if not much style. Great handling and a decent manual gearbox make up for the lack of power at just 76bhp.

The bodywork looks very decent but the advert does say the exhaust is “louder than normal” which to be fair is something some people pay good money to get.

2007 Vauxhall Astra – £995
For a bit more power you’ll need to look at this 15-year-old Astra instead, which has a 16v 1.4litre engine – although that’s not going to provide enough oomph to worry any local speed cameras unduly, even the new 20mph ones.

This is a smart metallic black example that presents well on the outside, but slightly less well inside. That’s summed up by a questionable looking stain on the front seat that we don’t even want to speculate on quite frankly.

2008 Renault Clio – £880
Clios are generally very good little cars and this one-owner example for just £885 is a bit of a steal. It’s MOT’d for almost a full year, has covered a ridiculously low amount of miles for a 2008 car, and you’ll probably get 40mpg around town.

Ok, so it has lost a fight with shopping trolley at some point, and said shopping trolley could probably out-pace it to 60mph, but it definitely has a certain ‘je ne sais quois’. Although that might just be rust