BMW is working on a comprehensive refresh for its range of flagship SUV models. The X7 facelift is just around the corner and the smaller X5 and X6 families will also receive updates soon. We’ve seen the regular X5 and X6 plus the X5 M out testing, and now it’s time for the X6 M to make its spy photo debut. Just like its more conventional brother, the performance coupe-SUV is being tested on public roads with minimal amounts of camouflage.

In fact, the X6 M has even less disguise in these new spy shots compared to the X5 M. Our photographers were able to catch two prototypes of the machine in Germany and they both had only their front fascias covered. A pair of slimmer headlights are expected to be hiding there, though these are not going to follow the refreshed X7’s split headlight setup. The radiator grille could also be tweaked a little but don’t worry – it won’t grow much in size, as far as we know. 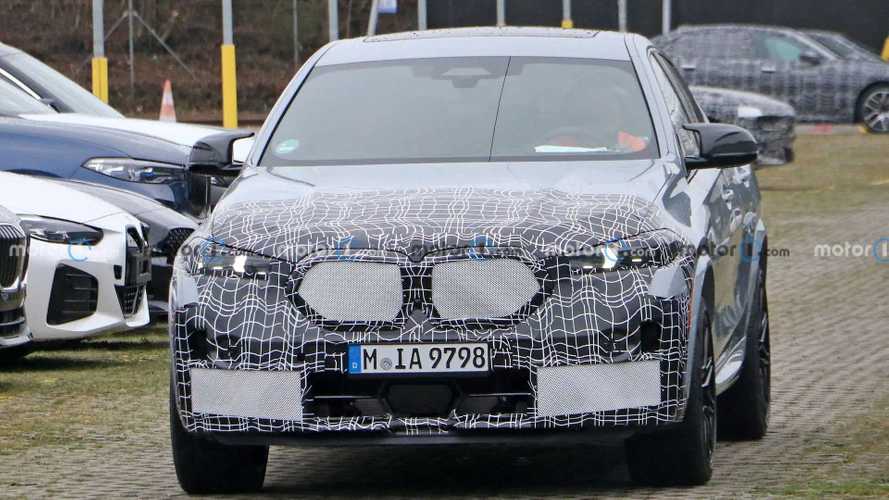 As mentioned, these two trial vehicles don’t have any camouflage at the back. This could mean there are very minimal changes planned for the rear end that it’s not even worth hiding them from the camera. Alternatively, these could be early test prototypes and the changes at the back could come later on as testing progresses. It’s worth pointing out that an X6 prototype we spied earlier this year also had zero camo at the back.

We also know the X6 and X6 M will receive major changes inside the cabin. A pair of new screens running the iDrive 8 infotainment software is expected, as well as other tweaks to the center console. The tall gearshift of the current generation models will most likely be replaced by a much more delicate rocker control.

There are no indications for any changes under the hood as the X6 M, together with the mechanically related X5 M, is expected to carry over with the 4.4-liter twin-turbo V8 of the current model. This means the performance SUV will offer up to 617 horsepower (454 kilowatts) in the Competition trim for a 0-60 miles per hour (0-96 kilometers per hour) acceleration in just 3.7 seconds.