Hyundai Motor Group has accustomed us to bold designs for its electric vehicles in recent years and the all-new Hyundai Kona Electric makes no exception.

Previewed here for the first time alongside its hybrid and ICE siblings, the second-generation Hyundai Kona marks a major departure from its predecessor. For the new generation of its iconic subcompact crossover, Hyundai says it started with the EV variant “to bring technology-led design thinking to the entire Kona range.”

All four variants of the vehicle—EV, HEV, ICE and N Line—share a universal architecture but each gets unique styling cues. The design is certainly bold and futuristic for all of them, with the Kona sporting a distinctive nose dominated by the stretched Seamless Horizon Lamp DRL, which is pixelated on the Kona Electric. The use of Parametric Pixels links the Kona Electric to other Hyundai EVs such as the Ioniq 5 and Ioniq 6.

The Kona Electric also distinguishes itself from other powertrain variants through a pixel-inspired 19-inch alloy wheel design, black embracing line and optional black side mirrors and roof.

In addition, the front end of the all-new Hyundai Kona Electric features a closed-off trapezoidal grille with integrated pixels at the lower end and the charging port door. The Kona also features SUV styling cues including boldly sculpted wheel arch cladding that incorporate the headlights and taillights.

The 2024 Hyundai Kona is characterized by parametric surfaces, such as the sharp diagonal crease of the sides that connects the satin chrome molding from the belt line to the spoiler to create a contour that wraps around the entire vehicle. At the back, the Kona features another Seamless Horizon Lamp and a high-mounted stop lamp (HMSL) seamlessly integrated within the rear spoiler’s satin chrome molding.

Inside, the 2024 Kona features a driver-oriented layout dominated by the 12.3-inch dual wide displays and floating module and Ioniq 6-inspired steering wheel. The gearshift has been relocated from the center console to the steering column, while the center stack underneath the big displays includes the controls for the HVAC system. 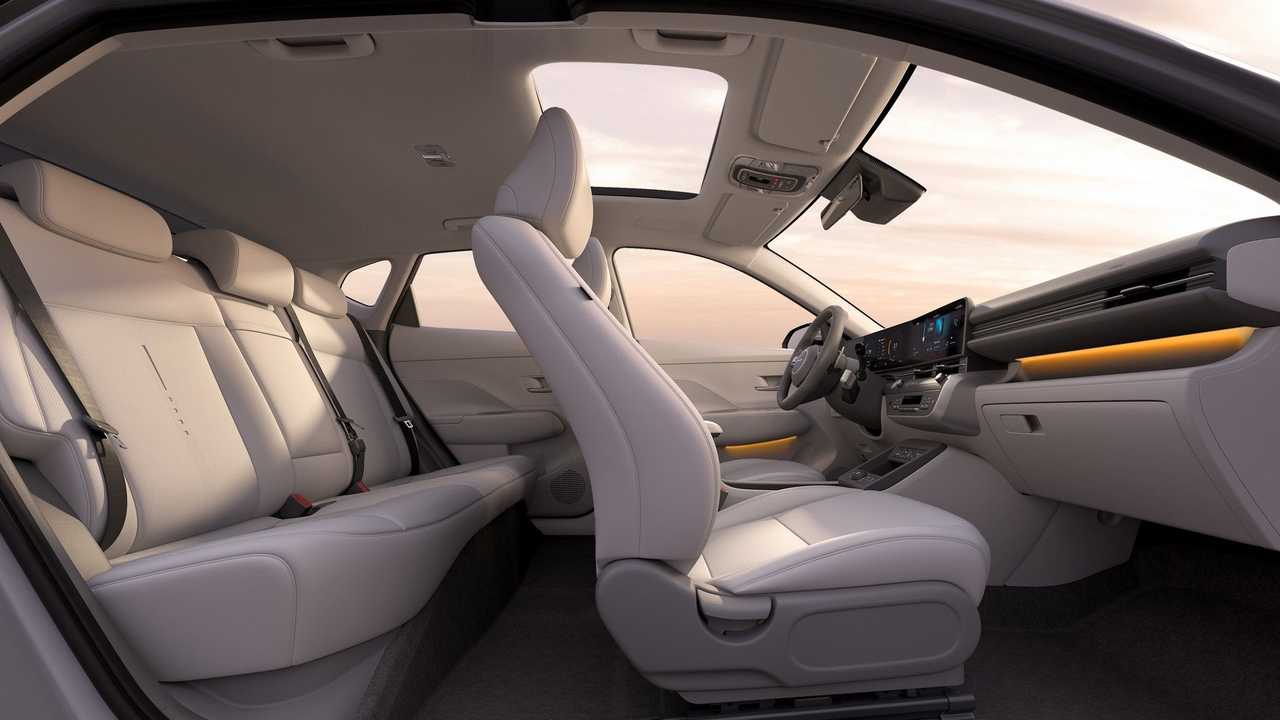 Further below, the center console sports additional physical buttons, a mysterious dial and additional space for belongings. Ambient lighting is also offered, while rear passengers get to sit on a so-called Curve-less Bench Seat. Tech upgrade aside, the big news is the 2024 Hyundai Kona offers a larger interior that’s said to provide a versatile space for driver and passengers, as well as maximized cargo space behind the second row.

The automaker did not communicate interior dimensions, but did reveal the exterior size of the new Kona Electric. The subcompact crossover now measures 4,355 millimeters (171.4 inches) in length, making it 150 mm (5.9 in) longer than the outgoing generation. The new model is also 25-mm (1-in) wider and has a 60-mm (2.3-in) longer wheelbase.

Hyundai will announce more details about the 2024 Kona, including powertrain specifications and pricing, in the coming months. If the past and present are anything to go by, the new Kona Electric should share the powertrain with its Kia alter-ego, the recently unveiled 2023 Niro EV.