The overall car sales in China decreased in November, but the plug-in electric car market does not stop growing, not even for a while.

According to EV Volumes’ data, shared by Jose Pontes, some 625,205 new passenger plug-in electric cars were registered in China in November, which is 50 percent more than a year ago and the second-best result ever (after 636,223 units in September).

Plug-in car share out of the total market improved to 35 percent and there is a big chance that it will move towards 40 percent in 2023.

Both all-electric and plug-in hybrid car sales improved quite noticeably. PHEVs were up 88 percent year-over-year, setting their seventh monthly record in a row. Nonetheless, the BEV segment is still much bigger than the PHEV one.

Results for the month: 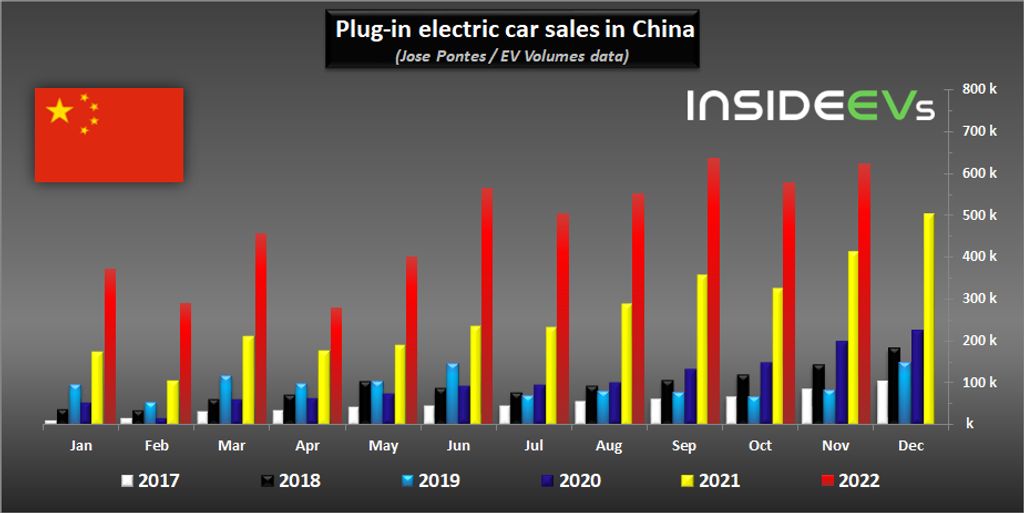 So far this year, over 5.2 million new passenger plug-in electric cars were registered in China (almost twice more than a year ago). That’s also more than in the entire year of 2021.

According to the China Passenger Car Association (CPCA)’s updated forecast, some 6 million passenger plug-in electric cars might be sold in China in 2022.

In terms of top-selling models in China, in November, BYD managed to put seven models in the top ten plug-in list, which speaks for itself.

* BEV and PHEV versions of the same models were counted together in the source.

Year-to-date, the BYD Song Plus finally overtook the Wuling Hong Guang MINI EV and is on a clear path to winning the 2022 best-selling plug-in car title (we are just waiting for the official sales results for the month of December).

After 11 months of the year, BYD further expanded its market share, moving towards one-third of the entire Chinese plug-in car segment. It might become the top OEM in the country.

Other brands and manufacturers (automotive group) appear to be losing ground, which is indicated by a shrinking market share in most cases. Well, Tesla rebounded by 0.3 percent, from the export-focused October, but that’s an exception. An interesting thing is that Changan noticeably improved its position to 3.8 percent.

Top brands by share in the plug-in segment year-to-date:

Top automotive groups by share in the plug-in segment year-to-date: