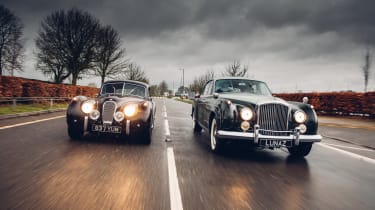 Classic car collecting has always had a certain cache about it, and it seems those with deep pockets are now making the practice even more fashionable, by converting older cars into EVs.

Following in the footsteps of Prince Harry and his wife, the Duchess of Sussex, who used an electrified Jaguar E-Type – the E-Type Zero – as their wedding car, classic car enthusiasts are increasingly taking older cars that originally ran on petrol, and replacing their engines and fuel tanks with batteries and motors.

This green conversion doesn’t come cheap and isn’t without its critics, though; the F-Type Zero had a projected pricetag of around £300,000 before development was paused, while a similar project that saw a DB6 Volante converted by Aston Martin Works brought with it similar expected costs. Critics, meanwhile, hold that altering rare cars by installing EV powertrains is incompatible with preserving their heritage.

Despite these issues, classic car fans are surging ahead with commissions, chasing both the appeal of owning a classic car, and the knowledge that they can drive one around without being criticised for running what would likely be a car with relatively high emissions. 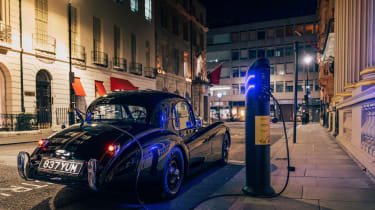 The green credentials and flowing lines of EV classics are backed up by serious performance, with Lunaz’s electric Jaguar XK120 producing 375bhp and 700Nm of torque thanks to its 80kWh battery pack and motor. The XK takes just five seconds to go from 0-60mph, and has a range of 250 miles plus. Lunaz is also making a limited production run of the 1955-65 Bentley Continental Coupe and Drophead, the Mulliner Flying Spur, and classic Rolls-Royces.

Prices for one of Lunaz’s cars start at £350,000, but despite this barrier to entry, Lunaz has seen a surge in demand of late, and is doubling its Silverstone workforce to meet this. And, while critics may claim converting classic cars into electric ones compromises their character or undermines their heritage, Lorenz sees things differently. “The world is changing, my daughter’s generation will not enjoy the same access to classic cars we have. We are engaged in the preservation of some of the most significant objects in history.”

The principle of converting a classic car to run on electricity sees the engine and drivetrain replaced with a motor (or motors) and a battery pack, although approaches to how this is achieved vary. Some firms commission bespoke powertrains and ensure any conversion is fully reversible, allowing the engine and associated drivetrain to be reinstated if this is desired.

Converting a classic car to run on electricity is no simple task, however. Even a conventional engine swap is an involved process, and installing a completely different drivetrain takes this to another level. Motor mounts will need to be fabricated, strengthening materials will be required so the chassis can take the extra weight of the batteries, while suspension and other components need to be changed to take into account the altered handling characteristics brought about by the shift in weight that removing an engine and installing a battery pack causes.

Brakes, meanwhile, are likely to require uprating to facilitate regenerative braking and cope with the extra power and torque; auxiliary features such as lights, heating, air-conditioning and power steering, meanwhile, also need to be adapted so they draw power from the batteries, rather than the engine. And all this work needs to be carried out by someone who is confident in dealing with both involved engineering, and high-voltage electrical systems.

Have you ever considered an electric car conversion? Let us know in the comments…