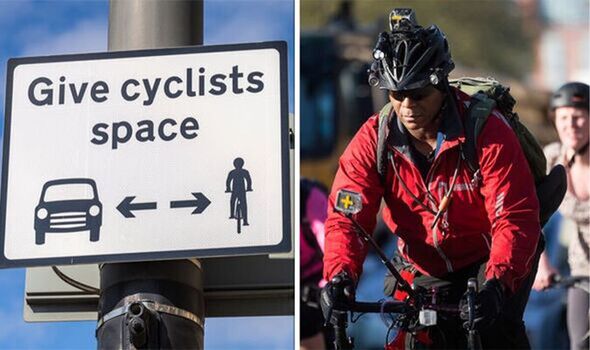 A senior road crime police officer previously claimed that he is “hugely supportive” of the practice which could help the police with gathering evidence. Andy Cox, the national lead on road crime reporting at the National Police Chiefs’ Council (NPCC), said he was in favour of the practice.

He said it could function as both a deterrent and a tool for evidence gathering.

Mr Cox added: “The way I look at it the police can’t be everywhere all the time, but the public can be.

“It’s an individual choice and it’s a choice to report any footage that they may capture.

“But the feedback I have from cyclists and drivers, who find some of the driving standards unacceptable and are deeply frustrated by it, is that they welcome the opportunity to provide footage for us.”

He commented that the police have always asked the public to report crime, stopping short of recommending that all cyclists don cameras.

There is an average of five road deaths in Britain a day, something which Mr Cox called “preventable deaths”.

This comes after major changes were introduced in January 2022 which outlined that motorists now had to follow new rules when driving.

The Highway Code changes outlined a new “hierarchy of road users”, which ensured that quicker or heavier modes of transport have the greatest responsibility to reduce the danger or threat they may pose to others on the road.

Cyclists were also given fresh guidance to ride in the centre of a lane on quieter roads, in slower-moving traffic and at the approach to junctions in order to make themselves as clearly visible as possible.

They were also reminded that they can ride two abreast, as has always been the case as it enables them to be safer in large groups or when riding with children.

However, they must be aware of drivers behind them and allow them to overtake if it is safe to do so.

Motorists are advised to give cyclists at least 1.5 metres of space when overtaking cyclists, a change that has caused a lot of confusion.

Bryn Brooker, head of road safety at Nextbase, said they had seen a spike in video submissions since the driving laws were updated in January.

Nextbase operates a portal where cyclists and drivers can post road footage that can be used by the police.

Mr Brooker said in the past, dangerous drivers “just got away with it” but dash cams and helmet cameras had ensured that more footage was sent to the police.

Another industry expert, Roger Geffen, of Cycling UK, said he was “ambivalent” about recommending helmet cameras for all cyclists.

He said the world would be a better place if cyclists didn’t have a need to wear a helmet camera.

He continued, saying: “If we want to normalise cycling, not just for the battle-hardened, lycra-wearing stereotype of cyclists but as a normal thing that grandparents and grandchildren alike can do as a way of getting from A to B, then we need to take dangerous drivers off the road.

“If dash cam and helmet cam footage is part of the means to do that, in the absence of proper road policing, then so be it.”

The National Police Chiefs Council (NPCC) has recommended that all police forces across England and Wales set up a system through which the public can send footage.

The Government said they have no plans to make camera equipment mandatory, with a spokesperson for the Department for Transport adding that road users are free to use dash cams as long as “it doesn’t impede the control of their vehicle”.